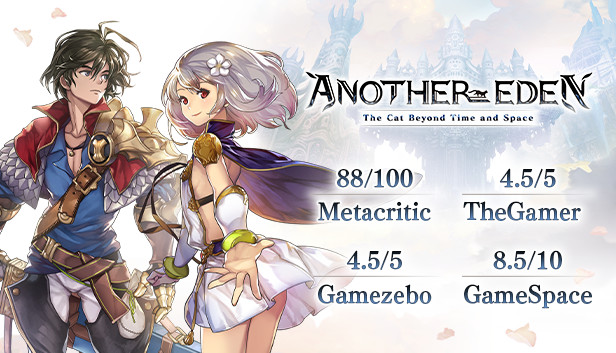 For Another Eden Beginners players, this guide is meant to help provide some brief concepts for putting together your team. This guide will not contain a comprehensive list of character names, as what you have is more important. Due to how gacha works, it’s not possible to point out specific characters to fill rolls.

This guide is meant to help provide some brief concepts for putting together your team. This guide aims to answer questions like:

This guide will not contain a comprehensive list of character names, as what you have is more important. Due to how gacha works, it’s not possible to point out specific characters to fill rolls.

Completing the main quest should see roughly a team of Lv.55-ish, with a mixture of two 3* storyline, four 4* and two 5* characters. Even though a team consists of 6, it’s still preferred to get 7-8 characters up to level, and change them based on the situation.

You can expect to do 5 10-pulls through free chrono stones before the end of the main quest; after that it’s about 1.5 10-pulls per month.

A basic team pattern, before you finish the main quest, would aim to include the following roles on your team, in descending order of importance. Some characters would satisfy multiple roles, for example AOE would also cover 1 DPS role.

An advanced team pattern, after you finish the main quest, should aim to farm the Another Dungeons (Hard or Very Hard). Each dungeon would require some adjustments, with a team of 6, including

Even though Class Change is possible, consider it as unavailable. You’ll be unlikely going to have what it takes to upgrade more than 1-2 3* -> 4* before you complete the main quest; although the material would be more readily available in the long term. 4* -> 5* is pretty impossible given the current drop rate of Chant Script.

It doesn’t matter much

Even if you made a wrong choice, it’s relatively easy to power level one character or two using your exp scrolls (you’ll get some through character quests). Plus, after you’ve finished the main quests, there isn’t much to do other than getting your entire roster to Lv.60.

Basically, anyone with a Heal skill. Rarity is the most important, since it would benefit both character survivability and heal amount: 3* healers only have Heal(S) while 4* healers would have Heal(M). Within the same rarity, the difference isn’t that big, pick whoever you have pulled, or, you know, all of them.

It’s suggested to keep 2 healers leveled, so that you can utilize reserve to replenish MP. However that’s more of a backup strategy when you’re really really out-damaged by the boss.

AKA, why you want to choose Ciel as your initial 4*.

There are two types of mitigation: POW/INT Break or Resist (Physical or Elemental) Up.

This is important because it sustains you during a fight. A poverty setup is Ciel (Initial 4* selection with POW Break, All Element Resist+ skills) + Riica (Story character that gets an INT Break skill); although it’d be preferred to include another magical mitigation or healer in the case Riica/Ciel is too busy. Miyu would also fit this slot, but is no longer being given out for free.

Notice that Break skill has a chance to apply; while Resist skill doesn’t affect your reserve. Mitigation through Valor Chant (VC) works as well. It applies 100% but only lasts 1 turn. If you can get SPD advantage over the enemy, that becomes effectively 2T, which means that a high SPD character jumping on and off will make the VC last forever.

This is a slot where you might need 4* characters would work for quite a while, since 5* mitigation is extremely rare. That being said, 5* characters are still better at both SPD and survivability.

The priority here is 5* >> 4* Elemental >> 4* Non-Elemental, because that’s how much damage it would deal. Mage class has an advantage over physical classes because they have a higher MP, providing more sustainability; and they have slightly higher damage as well.

The free selection of Aldo [and formerly Miyu] is not ideal, since they’re non-elemental (Aldo gets a fire-based AOE at 5* though). Since the initial 4* slot is likely going to Ciel, you likely need to rely on gacha luck to get one here. If you don’t have any AOEs, the fights will be harder, but not impossible.

In the long run, you might want 2 AOE characters, because enemies in high-level dungeons like Riftbreaker VH cannot be one-shotted by 1 AOE. But that might be a luxury at this moment depending on what you have pulled.

For main quest teams, it’s preferred to choose a set of DPSs that cover the full base. Since there’s a vast majority of DPS characters in gacha, it shouldn’t be hard. The story characters do cover all elements, but they’re at only 3* by default; Side Quest 4* characters are gradually being released, with the first one Diadera being Earth.

Within each category and element, there are some minor differences between characters. For example, Cyrus has a 2-hit sleep attack (leaning defensive); Nikeh has a 2-hit water resist down attack (leaning offensive); Rovella has only a 1-hit water with less MP usage. Even though Cyrus and Nikeh are more powerful than Rovella, when the boss has a water weakness it’s still better to have Rovella over Aldo.

In the long run, consider setting up one DPS team for each element by bringing up multiple characters of the element.

Below are some of the used terms and a brief description of what they mean.
That’s all we are sharing today in Another Eden Beginners Team Making Guide, if you have anything to add, please feel free to leave a comment below, and we’ll see you soon.
Credit to Venjjeance