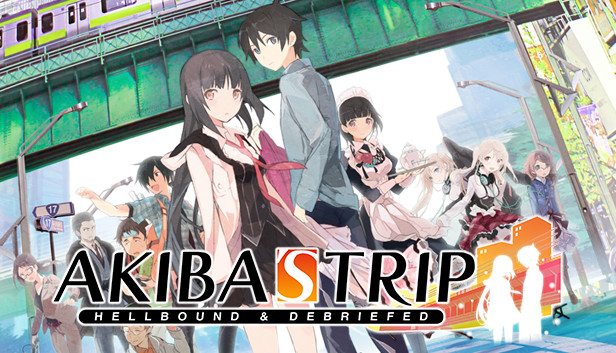 For AKIBA’S TRIP: Hellbound & Debriefed players, this is not only a complete walkthrough, but also covering gameplay basics, random tips, unlockables and secrets in this game.

I will be covering gameplay basics, random tips, unlockables and secrets in this game. Since I created a guide for 2 (Undead & Undressed), I thought about creating a guide for this 1 remaster as well.
This guide may contain light spoilers

Also, this game is a remaster of 1. So if you think the mechanics was dated in Undead and Undressed, you are going to feel that this game is much more sluggish and difficult to control. Also, this is a direct 1:1 remaster, so there is no new content. And all brands that was featured in the original PSP game has had their names changed (possibly due to expiring licenses).

Decided to create this section because I realised the default controls for keyboard is… well… very different. Especially to navigate the main menu.

Difficulty Settings are similar to Undead and Undressed

Do take note that the low hits will only deal to their bottoms. Same applies to middle hits and high hits respectively unless you are playing on Easy, which any hit will deal damage to all 3 parts.

Attempting a Strip on low HP clothes, will trigger a button mash.

Attempting a Strip on 0 HP clothes will directly strip them or tear them if you do not have the respective Skill book required to steal their clothes.

This game has a different mechanic when it comes to stealing their clothes after stripping the enemies. In Undead and Undressed, all you have to do is keep stripping them and you will eventually learn how to steal them. However, in Hellbound & Debriefed, you will need to buy skill items from stores located around Akihabara or learn it from the Master as part of the Story.

I refer stripping as holding the attack button respectively to strip. If you lack the skill book to steal their clothes, this will tear the clothes instead of stealing them. If you constantly hit a clothes with no HP left, it will eventually shred (which is similar to tear).

LAMMTORRA at NE Main Street for example, sells ‘Gotcha! – 24-Hour Cop-‘ Skill for 100,000 Yen which allows you to steal the clothes of officers.
The Skill ‘High School Charm’, for example, is learnt through the Master.

There are also a lot of costumes that only appear once in the whole playthrough (such as the Shrine Maiden costume). These characters only appear during Sub Missions. So if you want to collect them all, take care not to shred the costumes by accident or you would have to re-load your save. If you did overwrite your save, you can always get them again in New Game Plus mode.

When you first start the game, you realise you only have 1 type of normal attack for low, middle and high. New moves such as moving and heavy attacks can be unlocked by purchasing moveset books from stores around Akihabara. You will have to purchase each moveset book separately for each weapon class (Bare-Handed, One-handed, Two-Handed).
READ:  AKIBA'S TRIP Hellbound & Debriefed: How to Make Money & XP Easily

No special animation but high base damage:

This game features a hidden relationship stats in your character. You can roughly find out what each group feel about you by interacting with the palm reader (who can be found at Akihabara Station Front).

You will know it is Positive when: ‘These lines show great affection. The people of Akiba must love you.’, ‘Oh, this is a trust line! Someone named “NIRO” trusts you implicitly’, ‘A friendship line! With… Who are the Shadow Souls?’

If you strip too many innocent bystanders/civilians, you will notice that some civilians run away from you when they see you.

If you strip too many Shadow Souls, some Shadow Souls will instantly aggro when you get close.

People that rubs their hands and come and talk to you

I don’t know what to call this sub-header, but there basically exist a few NPCs that will walk towards you and talk to you the moment they see you. They are:

Stripping each individual clothes award XP and defeating a Shadow Soul will also award XP
If you defeat an enemy by shredding their clothes (continually hitting them without stripping them), you actually gain less EXP points.
READ:  AKIBA'S TRIP Hellbound & Debriefed: How to Make Money & XP Easily

Shredding clothes will not award any EXP and there is no defeat bonus for defeating civilians.

There is a chance of a Lost Maid/Lost Otaku spawning whenever you load into a map. They will run the moment they see you. They drop incredibly high EXP (similar to how Metal Slimes in Dragon Quest work) when you strip them. The defeat experience bonus (strip all headgear, top and bottom) is even higher and can easily go above thousands.

Tungsten and Synthetic Fiber can be used to raise attack power and durability, respectively by 1 and is permanent.

Temporary buff items exists too, such as Tauramine X or Can of Ramen, but they only last until you leave the area.

Always carry some UV Cut Sunscreen as they provide 30 seconds of ‘immortality’. It will not prevent your clothes from being shredded or stripped but it allows you to survive without clothes for 30 seconds. You must use it before all your clothes is gone. If the opponent attempts to strip your 0 HP clothing, quickly pause the game and use the UV Cut Sunscreen. When you finish the battle, a portion of your clothes will return back to you. If you don’t think you can finish your opponent off, running out of the map is an option.

This will get you the license to fight Sara and obtain the ability to steal her clothes.

Defeating her will get you the Nickname ‘Charismatic Maid’. She will only use her signature weapon on Gamer difficulty and onwards.

If you donate 1 million yen to the Charity Workers in a single playthrough, Suzuna will recover and will spawn at the park in that playthrough for you to fight and obtain her clothes.

The Sister’s Room Dialogue Options and what they do

I’ll give you an allowance: Increase affection with sister temporarily and possibly give you a discount when changing her clothes

It’s unlikely you will get into debt unless you plan ahead. There is one Sub Mission, ‘Forgive Us Our Debts’ exclusively at the Shadow Soul Route that requires you to be in debt. The reward for this Sub Mission is the skill to be able to strip moneylenders, so completionists will definitely want this.
READ:  AKIBA'S TRIP Hellbound & Debriefed: How to Make Money & XP Easily

To go into debt, you must not be able to pay the amount that you are required to pay. This can happen such as during ‘Rui’s Date’ where you cannot afford to pay the crane machines that she spent or when you ‘unwillingly’ spend at an Artlien.

But because ‘Forgive Us Our Debts’ Sub Mission is nearly at the endgame, Artlien no longer spawns at this point and there is no way to spend money that you do not have other than to get arrested and pay the fine. However, getting arrested is permanently recorded in Record. If you want to avoid this, the only way is to get into debt is to do so before ‘Mother Soul Arrives’

(SPOILER ALERT) Determining which Ending you will go for:

Sister Ending:
Give her 1 million yen in a single playthrough. That’s it. However, it should be noted that the Imouto ending will overwrite the other endings (Shadow Soul, Coexistence and NIRO). It is best to do the Imouto route on an ending that you have already seen.

Hidden Endings (within the Coexistence ending):

In the Coexistence route, there are two characters that you can opt to save them without killing them. This will slightly change what the characters say at the Epilogue.

1. Yu Abeno – During the prologue (the part with Sejima and Mido), if you let him go, the game would give you the option to let him go after defeating him during the final battle. Otherwise, this will result in him dying after you defeat him.

2. Mother Soul (Rei Anekoji) – You must complete the Paparazzi Sub Mission DIRECTLY before the final mission. This side quest only has a very short window and is only available during the The Siege of Akihabara and before going to UD+ for the final fights. This side quest will need you to obtain a Photo of Rui. If you do so, an additional dialogue option (“Rui’s father is close by right now”) will appear just as Rei is going to commit suicide. Saying that her father is nearby watching would give her the courage to continue living. Any other option will result in her death. If done successfully, the Nickname ‘Hope Bringer’ can be obtained.

In the Paparazzi Sub Mission, DO NOT answer ‘You’re no father at all’ and DO NOT let Rui know that you are doing for a client or else, the mission will fail instantly and Rei will die after the final battle

What carries over in New Game Plus Mode?

Unlike the 2nd game (Undead & Undressed), money DOES NOT carry over. Money, Levels, Maid Points all do not carry over. The only two things that carries over from your old save in this game are your items, skills and the model swaps you unlocked

That’s all we are sharing today in AKIBA’S TRIP: Hellbound & Debriefed 100% Walkthrough and Tips, if you have anything to add, please feel free to leave a comment below, you can also read the original article here,  all the credits goes to the original author happynaru