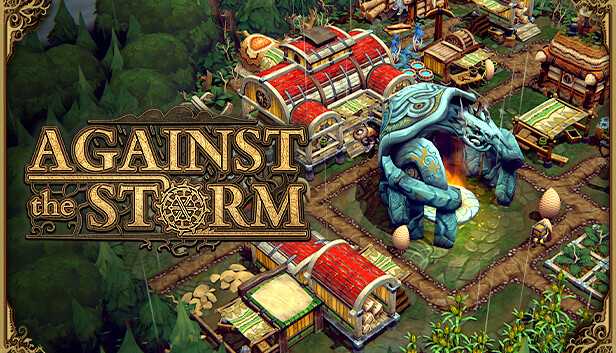 For beginners of Against the Storm, this guide provides a large collection of hints, tricks, and ways to improve your game, let’s check them out.

A] You get to choose a location on the world map.
-> Placing your settlement near other settlements will mean you will have more places to do trade routes with. Can have a maximum of 4 settlements, including the capital.
-> If there is a Chest on the map, hover over it to immediately get its reward.
-> Some biomes are easier than others; make sure to read the tooltips for natural resources, biome-specific events, and suchforth.
-> If you place a settlement near a world map effect (doesn’t have to be on the square; adjacent works), that will be applied to the game. Some make the game super hard, so again read their tooltip.B] You get to choose a caravan.
-> I generally prefer Beavers, Humans and Lizards. Harpies can be good for specific biomes, but these are the trifecta as I think of them.
-> Beavers are by far the most essential, as they produce extra wood, produce extra planks, and are quite industrious, so they are ideal for mines, rain collectors and a lot of production facilities.
-> Humans are good for brewing and farming. Biome wise, they are essential for some, and a hindrance for others.
-> Lizards are fairly hard to keep happy, unless they are in hot structures, then they get a resolve bonus. Lizards are great if you have the Ranch, as it is by far the easiest structure to generate a massive amount of food and pairs really nicely with any structure that makes Skewers or Jerky.
-> Harpies are fairly hard to keep happy, unless they are performing alchemy or making clothes. I often have trouble keeping them happy, as the alchemy and clothing making structures rarely have good combinations of recipes and so they are rarely on my priority list to grab. Most games on Prestige 3+ I lose at least 4-5 harpies a game.
-> For embark bonuses, I like to grab Stone and some kind of food. Usually roots. Stone is useful for early game roads, and if you put them around the storage, it makes a lot of early game transportation to and from the storage much faster. I usually take roots because its good food by itself and can be converted into flour, like Wheat.
READ:  Against the Storm Helpful Tips when Starting Out

C] You get 3 blueprints.
-> I like to try to get production for Cloth, Bricks and Planks. The most important in my mind is Planks, as it gets used in a ton of things, especially in race specific housing and in decorations, for upgrading hubs. And beavers will greatly boost their production.
-> My personal favorite is the Carpenter, as it does Planks, Simple Tools and Luxury Goods, which are all useful throughout the game.
-> Bricks and Cloth can be nice, as they sell decently and are used in a lot of structures.
-> For bricks, my favorite is the Bricklayer, as it produces Bricks, Pottery, and Dew-Infused Ingots. Pottery is used for brewing Ale, Wine and making Pickled Goods; can also use Waterskins or Barrels. Dew-Infused Ingots, pairs nicely with Rain Collectors (always available) and these ingots can be used in a lot of recipes, including Simple Tools.
-> For cloth, my favorite is the Weaver, as it produces Cloth, Brawling Tools (or w/e they are called), and Trade Goods.
-> If you can’t get any of these, then, other structures that can be quite useful are:
A) Provisioner = Trade Routes requires a lot of Provisions, and this can make them quite cheaply. It can also make Flour, which is used in baking and can be turned into Trade Goods, and it makes Barrels. So for the econonmnist in mind, for mid-late game, this is quite a useful structure to have.
B) Farms = Depending on biome, you’ll want a different farm. But these can be great for producing food and for more complex resource chains, and there is often a ton of farm-related perks available with traders. But… if you don’t have humans, it won’t really be worthwhile.
C) Structures that produce Jerky. Its a simple food to make, it makes all races happy, and you can really extend a food shortage by making Jerky.
D) Ranch = If you have Lizards, you can generate your own meat, leather, and eggs. Without lizards, the recipes are quite expensive so it might not be worthwhile.
E) Structures that produce Pickled Goods. Generally easy to craft, as long as you have pottery, waterskins or barrels, and Beavers love them.

READ:  Against the Storm Basic Guide for Newcomers

E] Cornerstone.
-> I generally go for cornerstones that reduce hostility in some fashion, as this will be an escalating problem for any game, the longer you play that game.
-> Otherwise, ones that apply to an action I intend to do a lot, I’ll take, like +40% woodcutting speed.
-> I don’t take Delivery Lines though, as other cornerstones are just better.

So here are some more advanced tips to help you along:

1. You only plant during Drizzle. If you build a farm in Clearance, nothing will happen for the year.

2. You only harvest during Clearance. If they fail to fully grab everything, before the Storm hits, that will be lost.

3. You get trade routes every season, including the Storm.

4. Every 1 reputation you gain reduces impatience by -1. Often good to save orders to complete, when your impatience gets higher, to give you more breathing room.

5. Living Matter is both good and very dangerous. Passively it lowers resolve, and lowers it further when it is being worked on. However, you can get super rare resources and some nice perks from them, so I usually let there be 4 in my settlement at a time. Then when they double to 8, I cull 4 of them.

6. Working most glade events has various negatives. You should read them carefully, to know what you are getting into, as some might cause you to lose the game, at the wrong time. For example, if you are really low on food, you really do not want to do any glade event that rots your food.

7. You can change the firekeeper to a different race, by clicking on the race icon. Different races has different benefits, but my preference is Human.

8. Upgrading hearths is essential to reducing hostility. Building more hearths and upgrading them provides additional benefits. However, you’ll want a supply of burnables, as more hearths means more burned resources to keep them running. Do note that when you build an extra hearth, you need to give it a firekeeper, to keep it burning and providing its benefits.

9. Burning resources is good to reducing hostility, but if its super negative anyway, there isn’t much point, unless you have the resources to burn. Like if you are at -10 (or lower resolve) and you don’t have enough wood to burn for tier 3 wood burning, don’t bother. Its a waste of wood.

10. I like to place an extra storage, every 30 or so squares from the main storage. However, as they do require parts, which are rare, you may prefer to only place them near your extra hearths.

That’s all we are sharing today in Against the Storm Basic Guide for Newcomers, if you have anything to add, please feel free to leave a comment below, you can also read the original article here, all the credits goes to the original author Bonegrinder