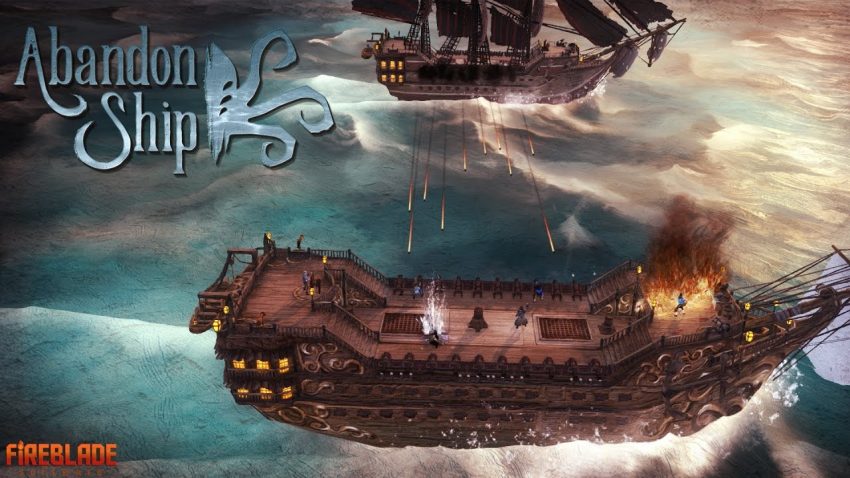 Here is a guide on how to get an easy start and one easy way to snowball into the late-game stages.

If you already went thru the game’s introduction before, I’d suggest picking the “After Intro” option under Quick-Start Mode. The other options are not so good because they skip too much.

For your first crew, select:

Why not Medic: all ships come with a surgeon table which you can use to heal your crew, on top of that, melee fights will often be over before the need to heal anybody.

Why not Sailor: this guide is focused on disrupting the enemy crew, so there won’t be much need for repairs.

You’ll start right next to a port, with a little bit of starting gold. What you wanna do first is to collect gold for exploring the map.

Go to the Explorers Guild and collect your 150 gold: 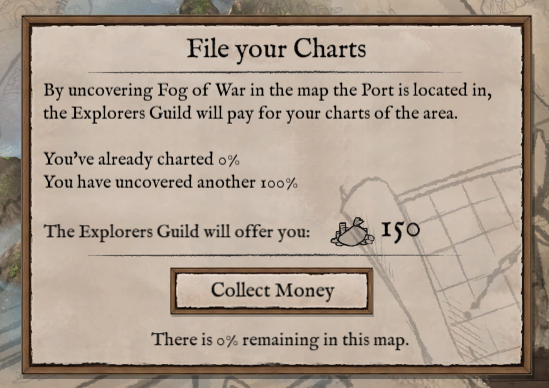 Scroll down to display your area map and then press space to PAUSE. Remember to always pause any time you need to read or look at something, otherwise the time Cult tracking timer will still be running and you will waste precious time doing nothing in the map.

You need to complete a certain number of events on the map in order the unlock the gates that lead to the next map. Try to plot an efficient path that will allow you to sweep all of the goodies on the map without too much backpedaling. 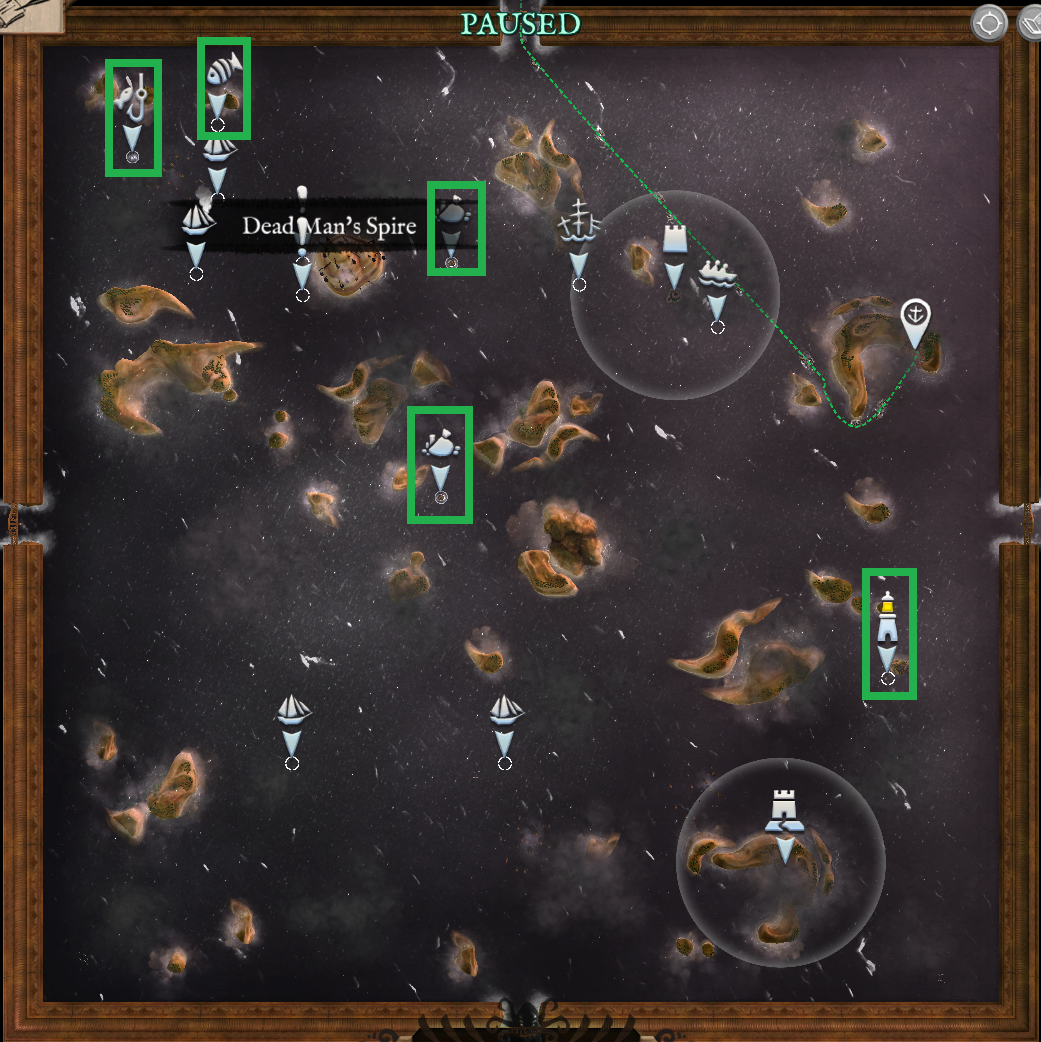 Apart from the free stuff, everything else counts towards unlocking the gates. Ship icons will most likely lead to a ship fight, other icons have a chance of being good events, bad events, or ship fights.

I recommend getting everything, except for diving bell icons. These seem to have way too high a chance to take down one of your crewmates, which is gonna cost 50g to revive and then another 65g to remove the random negative trait. Don’t take the chances until you’re swimming in gold.

Press L to go to the ship view.

You want to place your Navigator at the helm, your Leader at the Chain-Shot, one gunner at each set of cannons (you start with 2 separate group of cannons, each set having 2 cannons) and the last crew helping one of the gunners:

Don’t forget to save your positioning:

During fights you may have to move your crew mates to avoid poison damage, fix holes, put out fires etc. Having a saved position allow you to reset your crew to their original positions with one click (or tapping Z):

During the early stages of the game you want to avoid damage as much as possible so as to reduce the amount you’ll have to spend repairing the ship.

You also want to maximize profits, which is achieved by winning the combat without destroying the enemy ship.

Boarding is the best option to achieve both goals. Right as the combat starts, change the range setting to BOARDING RANGE: 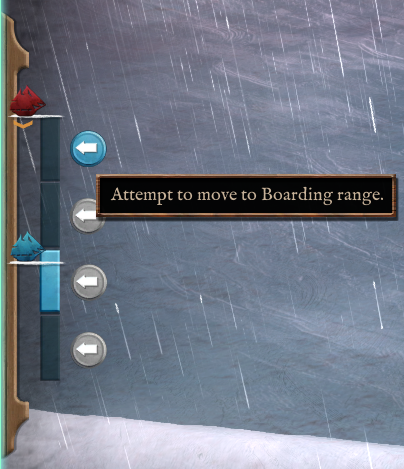 The orange arrow under the enemy ship icon shows where the enemy is trying to go: away from you or closer to you.

If the enemy ship has a preference any range other than BOARDING, which is very likely, they will not let you come close, which is why you should aim the Chain-Shot and all of your Cannons at their mast. The more their mast is damaged, the quicker you will get to boarding range.

Aiming the cannons at the mast can be a little finnicky. The hud at the top-right corner and the highlighting can be used to confirm you’re aiming at the right place. 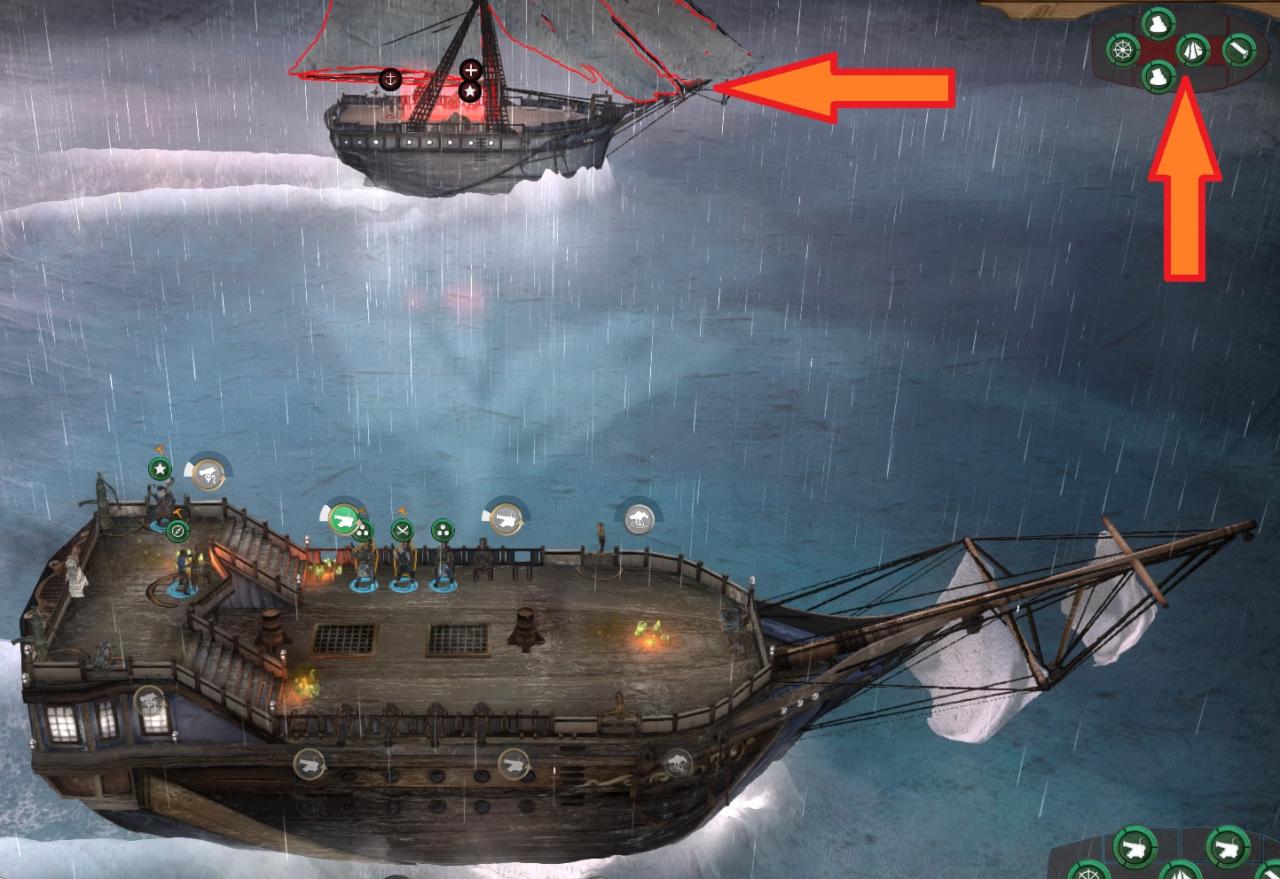 If you got the mast PERFORMANCE upgrade suggested by this guide, you will get to boarding range faster.

Once you get to boarding range, select all of your crew except your navigator and order them to attack their ship navigator. Once their navigator is off their helm, you can send your own navigator to join the fight. It’s important NOT to send your navigator straight away (unless you’re 100% sure you will win the battle) because the enemy ship may have a way to move away from your ship, which will cause your crew to be unable to go back in case they need healing.

When you’re fighting on the enemy ship, PAUSE, select all crew, order all to attack the same enemy crew, UNPAUSE. Repeat this until all enemies are dead.

If done correctly, you should all of the early battles while taking minimal damage: 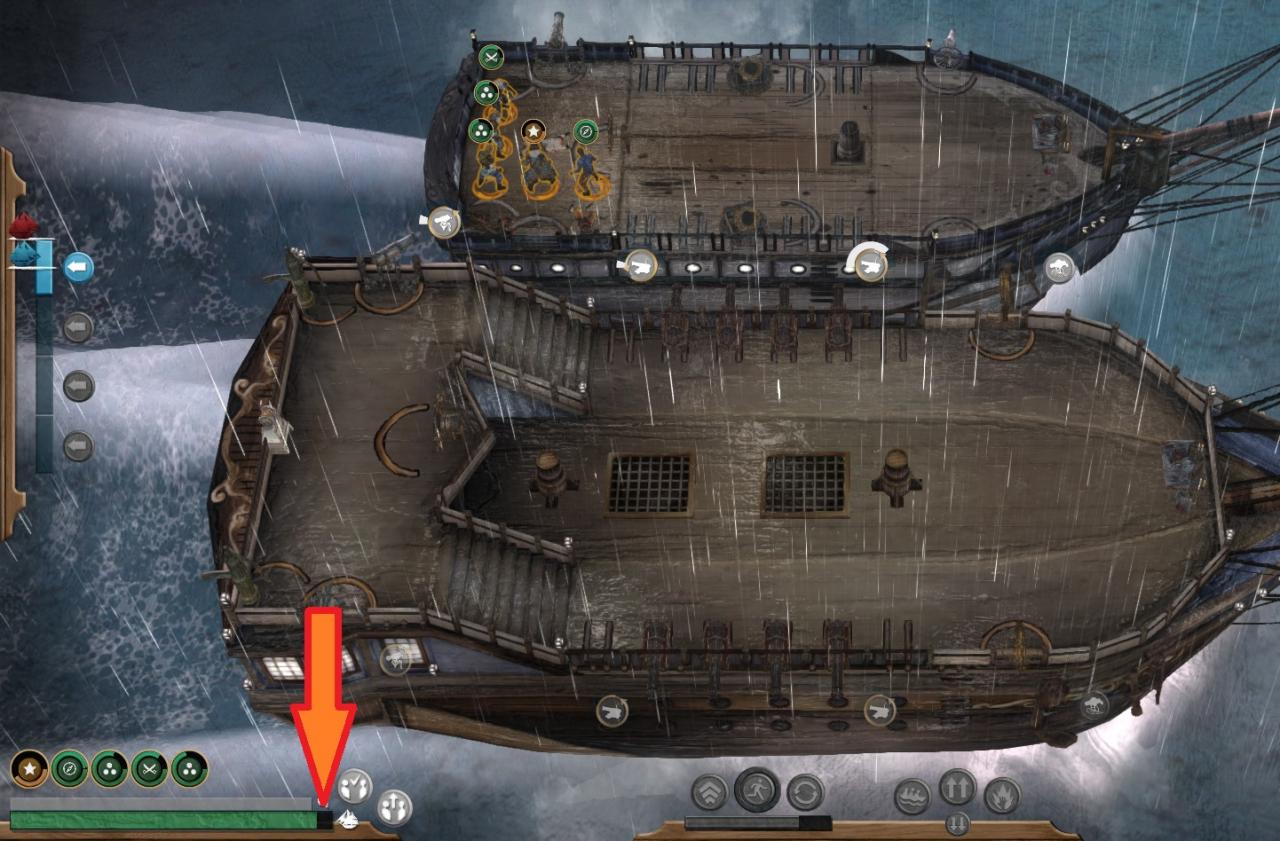 Sometimes it won’t be easy to board because the enemy will rebuild their mast constantly. For those situations you have the option to RAM, which can be activated once your Navigator has spent enough time on the helm and your ship is in close range:

Also beware that some enemy ships have boarding spikes which will take about 25% of your boarding crew health upon landing on the enemy ship. Make sure you have the numeric advantage and abuse PAUSE to reposition or send back crew that is about to die.

Time spent on the map contribute to the cultist tracking you.

When the tracking indicator gets all green, one of 3 things will happen:

If you get the Kraken, the most important thing is to keep your navigator (or anyone else if your navigator is crippled) on the helm throughout the whole encouter. Every second spent on the helm is loading the Maneuvering bar which when filled up will allow you to load the FLEE action.

Right at the start, position the rest of your crew across the ship in a horizontal line: 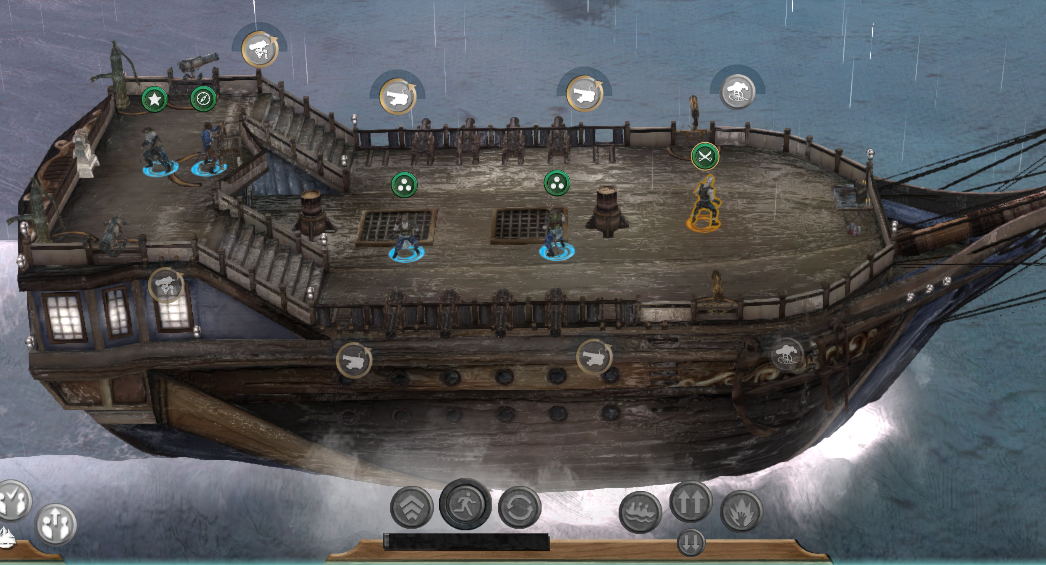 When they are gone, heal who needs to be healed, reposition your crew in a horizontal line again, and repeat until you can activate the FLEE action:

The Kraken will occasionally spawn 2 haliphrons or knock some of your crew down to hamper you progress, remember to abuse PAUSE to respond as efficiently as you can.

After the FLEE action is activated, your navigator has to stay on the helm to complete the action (blue circle filling up around the flee icon). When the tentacles are holding your ship, the flee bar will stop. During this window you can use your navigator to help getting rid of the tentacles.

If done correctly, your ship should only get pounded 2 or 3 times at the early stages, and only 1 time at later stages when you have more crew and a leveled up navigator.

There are kraken icon events on the map that trigger a ship combat that reverts a small portion of the cultist tracking indicator. You can do them to buy additional exploration time without being bothered by the cultists.

The boarding tactic will carry you through most of the early stage of the game. That time should be used on transitioning to a crew disrupting tactic.

Here is what your priorities should be:

When you’re starting, you will use the swivel guns to disrupt the enemy crew (disable their helm guy to quickly get to boarding range or disable the crew at the cannons to avoid taking damage as you approach) and damage them enough to let you finish them off safely when you board.

This tactic will net you a lot of gold because not only you’re getting the bonus for not sinking the enemy ship, you’re also taking very little or no damage because of all of the crew getting disrupted, which frees you from one of the biggest money sinks in the game: repairing the ship.

As you get more weapons and reloading levels you will find that you can kill all of the enemy crew without even having to board them. At this point you want to just keep the least optimal distance for your enemy (if enemy wants to get close to you, get far away from them, if they want to get far from you, get to boarding range) and finish them off.