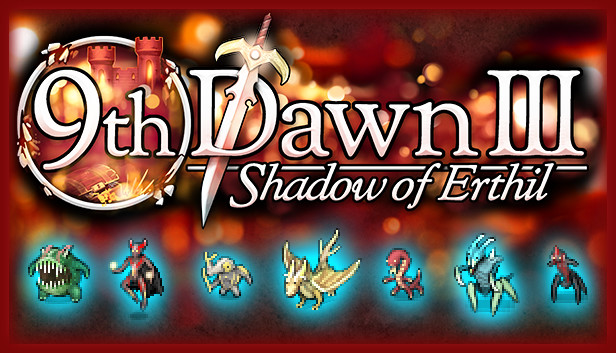 For new players of 9th Dawn III, this is a quick guide that contains tips and tricks I figured out after about 10 hours of play, let’s check it out.

Complete beginner’s tips to get started

Just wanted to post a short beginner’s guide on this very enjoyable game. FYI: I’m completely new to the franchise and I play this with an Xbox One controller (which works very well with default settings) so I may be missing information about many things admittedly.

1. The game is designed to get you to fail at a lot of things initially. It can be frustrating when you spend all of your gold on trying to develop a crafting skill or to catch a creature. Just keep in mind that every failure gives you experience in that category to make the next attempt more likely to succeed. It can take many attempts to get to a point where you can consistently produce a positive result. When you do however, you’ll easily start climbing up that skill level/crafting ability/creature capturing/etc. It seems that just about everything is getting easier as you grind. You’ll fail less and collect more. Except Fyeud… You only have yourself to blame for failing that. It was your choice to start the game after all.

2. I might have missed it… But I don’t recall the tutorial mentioning that you can dodge roll? I played for 2 hours before I accidentally rolled my character. I was floored, I had given up using melee weapons and went straight to a wand before I realized I could have been rollin’ this whole time. Rolling also destroys all those containers in one hit, beats chopping at it 2 or 3 times a bucket.

3. Speaking of wands, it seems to be a very good weapon to work with at the start of the game. Even better, use 2 of them. I focused on magic abilities early on too. Trained Regen and Fire Ball as my first two skills. Those two alone kept me going until my wands dealt way more damage than the fire ball. Regen Friend works well when you start to capture creatures too. The regen buff lasts a while (3 or 4 minutes I think) so you’ll keep yourself and them alive much longer that way. By the way, using the red Bloodspawn portals will bring your creature back to life.

4. I’m still not sure how capturing creatures works exactly but in my experience so far you’ll probably want around 8 bait and 5 or 6 snare traps to get started. Head back in the starting sewers and try to catch one of the grey or white rats there. Make sure it’s not the large rat or one of the other flavors as they will probably be harder to tame. Make sure there’s only the one creature there with you and drop bait. When it moves over it, it’ll start to show a heart. The tutorial says that they will show “many” hearts or something like that but I’ve only ever seen one at any time after 6 or 7 feedings. Then drop the trap. Keep an eye on the log, they probably won’t get caught on the first few traps. Eventually the hearts will go away and you need to bait them again. Of course you’ll be broke at his point so you’ll need to make some gold.

5. Gold seemed very scarce at the beginning of the game. I started selling all my excess equipment early on to get some quick cash. If you find food for creatures, I’d recommend selling them. They get you a couple thousand gold each and honestly your pet will out level you 20 minutes after playing with it in your party. When you start getting strong enough to one hit all the mobs in the dungeon you are in, just run through it picking up loot from monsters and containers. You’ll be selling raw meats by the hundreds for some quick gold in no time.

6. Talk to everyone and start any quests they give you. This is how you unlock all of the different crafting abilities, fishing, starting Fyeud cards, etc. If you run out of Fyeud cards you can buy another set of starters from the same person who gave you the free ones.

A few things to be wary of:

7. Bosses can be very tough in some areas. Be prepared, spam health potions a lot.

8. I recently unlocked Nameless (the companion character) and was not able to find a way to share items from my main character with her. Found a workaround though, you can deposit items in an empty treasure chest anywhere in the game and then switch characters to take them back. As far as I can tell, Nameless is completely independent of the main creature. Has her own inventory, creatures to tame, bank, skills, etc. The only thing that carried over is she will be able to craft, cook or fish without having to do those unlock quests over.

9. Fyeud… I’m like 2-12 in this game so far. Stick to playing the few characters you first met as everyone else will crush you. I don’t know if this is a bug, but when I finally won my second game and chose a card for my reward, the game prompts you if you are “Sure you want this card?” I cancelled the selection with the B button and couldn’t pick another one, lost out on the reward completely.

Hope you all enjoy this game, hope one of these tips help anyone on the fence about trying this game. It’s been a great time so far, we need more fast paced action RPGs like this!

That’s all we are sharing today in 9th Dawn III Quick Tips for Beginners, if there are anything you want to add please feel free to leave a comment below and we’ll see you soon.