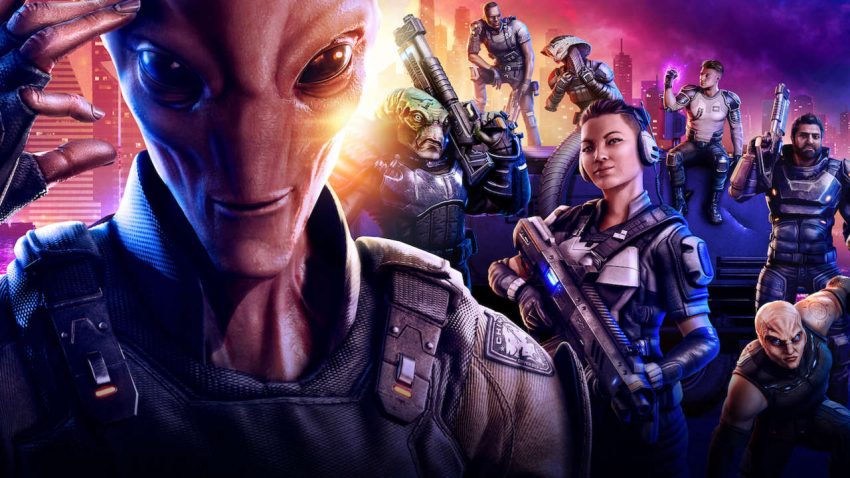 XCOM: Chimera Squad is still classic XCOM. You gather resources and unlock technology on the strategic map, and then dive into turn-based tactical battles to secure objectives and beat down the resistance menace. here is the achievement guide for you.

This guide will likely contain spoilers!

City on Fire
Complete the tutorial.

After completing the tutorial, your squad will arrive at their new base. You’ll be given a tour around the interface, but especially the City Map. At this point, you’ll be able to choose from three investigations. Which one you choose will determine what story missions you’ll have on the City Map.

The primary missions will appear in Purple. When you complete these, you’ll unlock more things for the investigation until you find out the faction leader. Continue to follow these Purple missions until you clear up the entire investigation. There are a total of three investigations:

As you move through the investigations, you’ll have periodic windows pop-up where you’ll have to choose a story direction. While I’m unsure of the timeline specifically, these options do change the narrative of the investigation and there is an achievement related to them.

Every Timeline
Complete all versions of each Faction’s Takedown mission over multiple campaigns.

Heroes of City 31
Win the campaign.

No Stone Left Unturned
Complete every Spec Op at least once in a single campaign.

When at the base interface on the right-hand side, click the orange plate to open up the Spec Ops menu. From here, you can assign your squad-mates to various assignments that will yield rewards. Complete all missions here throughout the campaign.

Hammer and Tongs
Complete 20 Assembly Projects in a single campaign.

Clicking on the blue plate to open up the Assembly menu, you’ll have various items to research by assigning your squad-mate to the interface. Complete twenty of these projects and you’ll net this achievement.

You’ll be able to purchase Android upgrades from the Assembly menu. Getting all of the upgrades for the Android should get you this achievement.

Use the Large Cuffs
Capture a Praetorian

A New Look
Launch a mission with no human agents in the squad.
READ:  XCOM: Chimera Squad - How to Replace Agent Ranks

The more Agents you unlock, the easier this will be to setup. Simply start a mission with no humans on your squad. You’ll need a minimum of four agents that are non-human to do this achievement.

Chimera Unleashed
Use every Agent in at least one mission.

There are a total of 11 Agents in Chimera Squad:

Simply use one of them in a single mission and you’ll get this achievement. You’ll unlock more Agents as you go and you’ll want to experiment, so this is a fairly natural achievement to get.

Overqualified
Reach max rank with all Agents in a single campaign.

There are 11 Agents that you’ll have to get to max rank. While I’m unsure the specifics, it seems like you get experience quick enough that you’ll naturally get this so long as you’re using all of your Agents periodically through the campaign. Their rank can be viewed in the Armory.

Book Smart
Complete all of one Agent’s class training.

On the right-hand side of the base interface, you’ll see a green plate. Click this and you’ll access the Training menu. From here, you can select an Agent and train them over a period of days. Complete the class training for one Agent and you’ll get this.

Extra Hours
As Godmother, activate Overtime and down an enemy on both turns.

…Makes the Dream Work
Complete an objective with an action from Terminal’s Cooperation.

This is the third rank upgrade that Terminal gets. On a mission that has objectives (ex: Contraband) and use her ability on another Agent so they get another turn. Use that Agent to complete the objective and you’ll get this achievement easily.

Mind Nuke
Use Verge to do 10 or more damage with one Mindflay.

Mindflay is the third rank upgrade for Verge. When using his Psi abilities, enemies affected will be added to his Neutral Network. Get about four enemies in this Network and then use his Mindflay. The ability itself does 2-3 average damage, so you could try five enemies to be safe.

Chain Reaction
Use Claymore to detonate a Shrapnel Bomb with another explosive.

Ducks in a Row
Use Blueblood to hit 3 or more enemies with one Phase Lance shot.

Daisy Chain
Relocate the same unit with Shelter and his ghost in one turn.

Brawler
Use Zephyr to hit 3 or more enemies with one use of Crowd Control.

Crowd Control is the third rank ability for Zephyr. When there are three or more enemies grouped in a single location, use the Crowd Control ability on all three. The radius is rather small so they’ll have to be grouped up pretty well. Likely, you’ll need Zephyr closer too.

READ:  XCOM: Chimera Squad - How to Optimize on Nvidia GPUs

Watch your Step
Use Torque to Tongue Pull an enemy into poison.

Torque has her Poison Spit ability at the third rank. Throw down your Poison Spit near an enemy and then use the Tongue ability to relocate them into the Poison. You don’t have to kill them, just bring them into that gooey green pool.

Anger Management
Kill an enemy with Axiom while Berserk.

Need a Lift
Move a VIP with Shelter’s Relocate and Torque’s Tongue Pull.

Impregnable
Have Kinetic Armor on all 4 squad members at once.

Cherub utilizes an ability that casts Kinetic Armor on nearby squad-mates. Another player indicated the best way to do this is to play an extraction mission and have all your teammates side-by-side before using the ability. This should get you the achievement easily.

…and Clear
Clear an entire encounter during the Breach turn.

This is best done on the easiest difficulty with your most aggressive Agents. I’d recommend using Godmother, as she tends to have a lot of damage with her shotgun. I would also stray away from using Zephyr as her melee ability is done after the breach itself.

I’ll Let Myself In
Use every type of Breach point.

I’m currently unsure how many Breach points there are. I would recommend swapping out your Agents periodically as some have different ways of breaching inherent to their character. I’m also positive that items purchased from Assembly can help you access certain Breach points.

Army of One
Complete a mission with only one Agent left standing.

It was easy enough to complete on a VIP mission. Evacuate all your Agents except for one. Then evacuate the VIP. The last Agent should trick the achievement into thinking you’ve only got one Agent left and you’ll net the achievement.

Otherwise, simply load up the easiest difficulty and get to a basic mission. Let three of your Agents die while making sure to stabilize them as needed. Then complete the rest of the easy mission with the Agent of your choice; I would recommend Zephyr for this personally.

Pacifist Route
Complete a mission without killing a single enemy.

Using the Subdue ability, you can easily get this on a one-encounter mission. I’d recommend doing it on the easiest difficulty and adding items into Agent utility slots that make their Subdue do more damage. If you have Zephyr, her Field Agent ability allows her attacks to knock unconscious instead of kill too.

Up Close and Personal
Complete an encounter by only dealing damage with melee attacks.

READ:  XCOM: Chimera Squad - How to Enable the Console Mode

The same way you get the Pacifist achievement. Use your Subdue ability on all the enemies in a mission and you’ll get this. Again, best done with Zephyr on the easiest difficulty. Be sure to add the utility items that makes Subdue more powerful.

Reinforced Steel
Replace an Agent mid-mission with an Android.

You should have Androids unlocked. Click on the box on the right-hand side of the base interface to enter Supply. Click on the last icon to categorize and purchase the Android for $150. You have the option to deploy them when you start another mission at the City Map.

This is best done on a mission that has multiple encounters. Allow one of your agents to die in combat during the first encounter. Once stabilized and you’ve cleared that encounter, you’ll have the option to deploy this android during the Breach. Do this and get the achievement.

Access the City Map and you’ll notice that each area has a small square in the right-hand side of the nameplate. Clicking this will allow you to access your Field Team. There is Finance, Security, and Technology with three upgrades for each. Get all nine for the achievement. 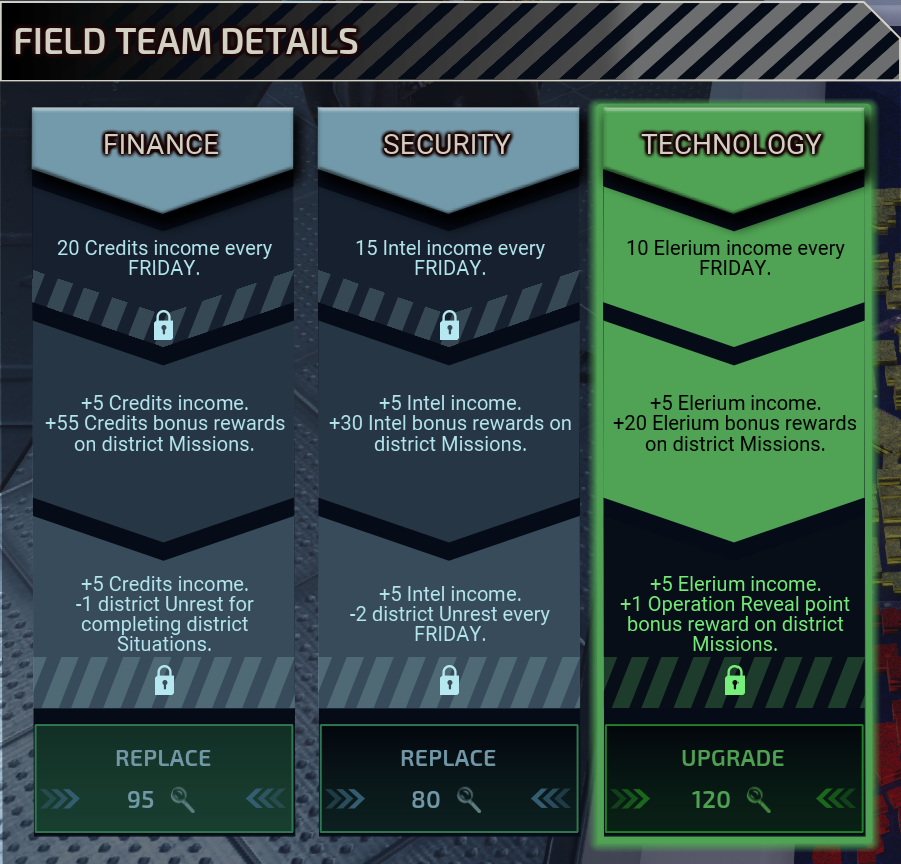 You can choose from one of the three categories for each of the nine Field Teams. Choose one and then upgrade them to rank three using Intel. Once you’ve gotten Rank 3 for every single district on the City Map, you’ll earn this achievement.

At certain points, the Scavenger Shop will open up. There will be three random choices to purchase for Intel. Sometimes, these are weapons or various rarity. Purchasing one will not only be an incredible boon to your squad, but also get you this achievement.

Thank You For Your Business
Buy 20 unique Scavenger Market items in a single campaign.

Note: this achievement guide is still work in progress. we will update more information later.
XCOM: Chimera Squad is now available on PC. you get the game from the steam.
By Wendy