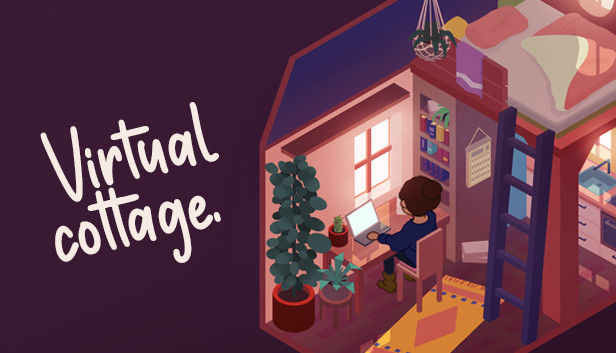 For Virtual Cottage players, this guides list all the helpful shortcuts that I have found so far since the application does not outright tell you what they are.

Virtual Cottage is a very useful productivity app which has soothing Lo-Fi music and ambient sounds; like rain, fireplace, wind and snow sounds go along with it in the background.

That being said there are some hidden shortcuts/secrets that the game doesn’t outright tell you, some of those can be pretty helpful so in this guide I’ll show all the secrets I have discovered so far.

Pressing space or enter on your keyboard does the last action done by the mouse. For instance if you paused the song by clicking the pause/play button with your mouse and then pressed space/enter it would click the pause/play button again and play the song.
It is to be noted that if you just opened the app and have not interacted with any buttons yet pressing space or enter will do nothing.

F11 switches the app from Windowed mode to Fullscreen mode. You can use this shortcut instead of clicking the on-screen button. F11 is a pretty common shortcut for fullscreen so you might already know it. Interestingly enough Alt+Enter does not work for this app.

The left and right arrow keys decrease and increase the volume of the music. This will not work if the app is paused or if the last thing you interacted with is the newly added lamp(don’t ask me why lol).

Secrets and Other Interesting Stuff

Pressing P at any time when in game will toggle display for playtime. This also shows the playtime in offline mode, which steam does not counts.

Pressing any button other than P after pressing P toggles playtime again and hides it.

Those of you who like messing around with stuff would have already discovered it though.

Pressing and holding the right arrow key when app is paused

That’s all we are sharing today in Virtual Cottage All Helpful Shortcuts Guide, if you have anything to add, please feel free to leave a comment below, you can also read the original article here, all the credits goes to the original author SX