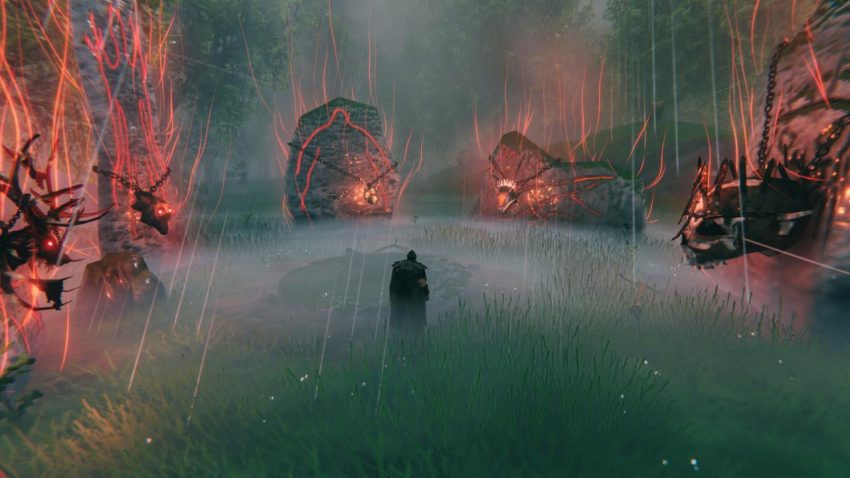 For Valheim players, this is a guide to summoning and  beating Eikthyr, The Elder, Bonemass, and the rest of Valheim’s dangerous bosses.

HOW TO SUMMON AND DEFEAT EIKTHYR

Biome: Meadows
How to summon it: Sacrifice two deer trophies at its altar
Rewards:

Eikthyr is the first boss you can summon in your starting biome. He’s an enormous stag with chains wrapped around his antlers. To summon Eikthyr, you’ll need to place two deer trophies (from hunting deer) on Eikthyr’s altar.

Eikthyr has three different attacks. From a distance it has a ranged electrical attack, shooting lighting from its antlers. Up close, it will rear up and stomp its front legs down for an area of effect electrical attack. It will also ram with its antlers as a melee attack.

Despite Eikthyr’s size, you can effectively block its attacks with a small wooden shield, so make sure you’ve crafted one. You can have a bow crafted to shoot it from a distance, but focus on blocking with your shield and striking it with a melee weapon like a flint spear or axe between its attacks.

After defeating Eikthyr, hang his trophy on the sacrificial stone at your starting point in the world, which will grant you the Eikthyr power, a buff to your stamina while running and jumping. 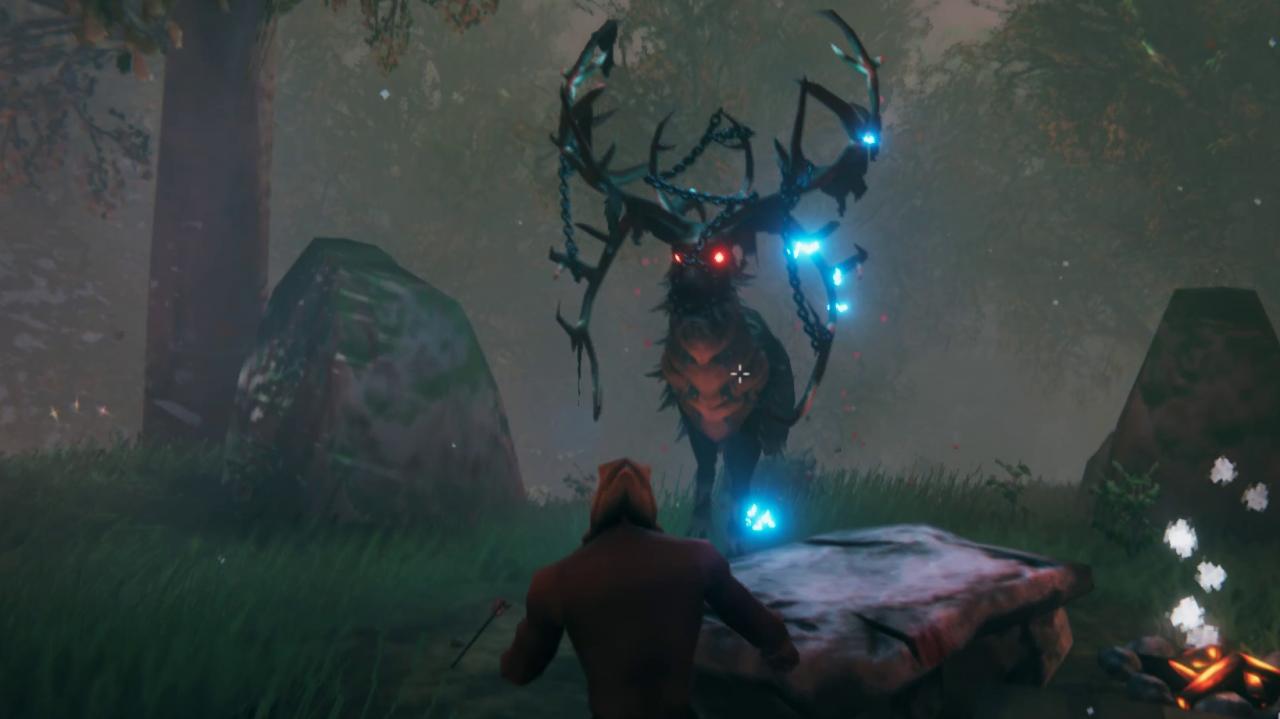 HOW TO SUMMON AND DEFEAT THE ELDER

Biome: The Black Forest
How to summon it: Sacrifice three Ancient Seeds at its altar
Rewards:

The Elder is Valheim’s second boss. You can discover its location by interacting with rune stones in Burial Chambers found in the Black Forest.

The Elder has three attacks. In melee, it will stomp on players with an area of effect attack, which does damage even if he doesn’t step directly on you. It also has a ranged attack where it shoots vines as projectiles. It can also summon vines from the ground around players, which will lash out and attack.

With the pickaxe available after defeating Eikthyr, you should be doing a lot of mining and smelting before taking on The Elder. You’ll want to be prepared with brass armor, a quality bow, lots of flame arrows, and healing potions if you’ve unlocked them. Fire damage is the best way to bring down The Elder, and it’s going to take a lot of flaming arrows, possibly hundreds.

You can also try placing campfires in his summoning area, because he may step on them while chasing you and take extra burn damage. Once summoned, use the pillars in his summoning area to block incoming vine projectiles, and pop out to hit him with arrows. Try to avoid kiting him too far into the woods, because you may aggro additional nearby greydwarf or troll enemies. You don’t need that headache.

When The Elder has been defeated, placing its trophy on the sacrificial stone will give you a power that increases your wood cutting speed. 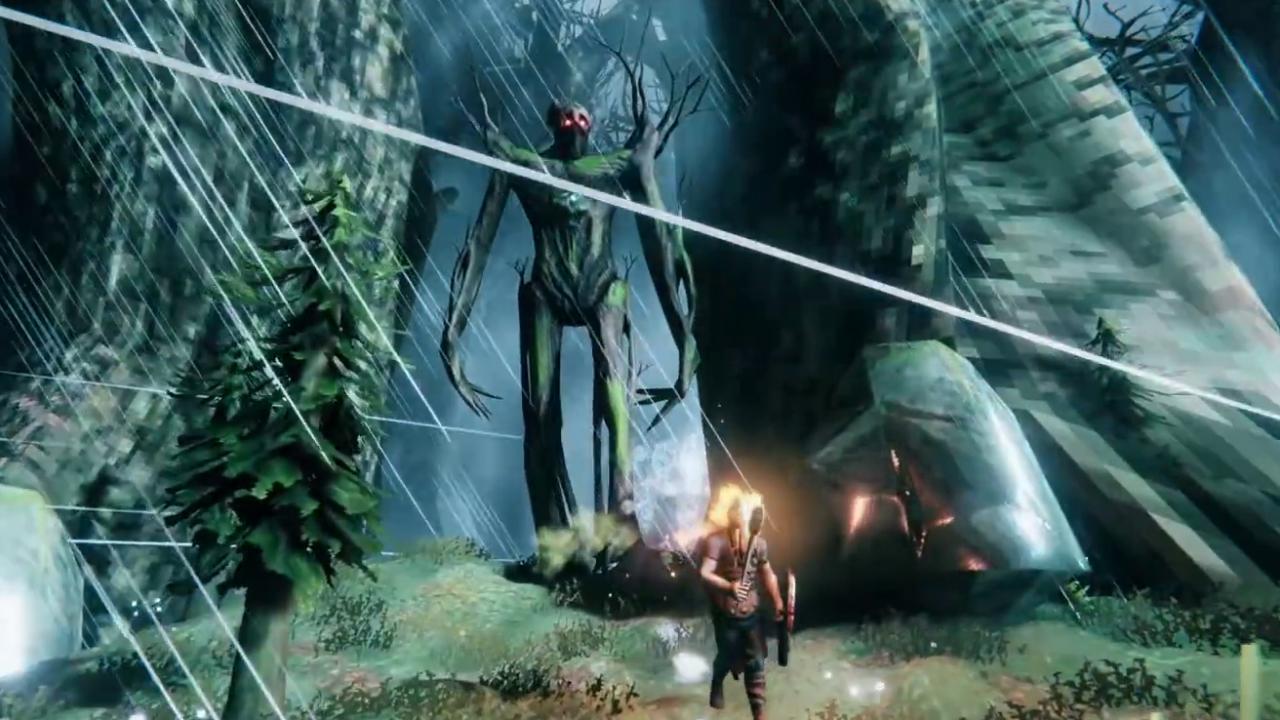 HOW TO SUMMON AND DEFEAT BONEMASS

Biome: Swamp
How to summon it: Sacrifice 10 Withered Bones at its altar
Rewards:

Bonemass is Valheim’s third boss, and he can be found in the Swamp. To discover his location, interact with a runestone found in swamp crypts, which you can access with the swamp key you got from The Elder.

Bonemass has three attacks. He has a melee strike he’ll use up close. He also has a toxic attack which fills the air and does severe poison damage if you’re caught in it. His third attack is summoning, and he’ll summon skeletons, blobs, and oozers to join the fight.

Even though this is the third boss of five, it may actually be the toughest fight in the game. Bonemass is highly resistant to all forms of damage except blunt attacks. You’ll want to use iron armor and blunt weapons like maces and hammers (like Stagbreaker) against him, and staying close enough to connect. Ranged attacks with bows and arrows are almost entirely ineffective. Even a fully upgraded wooden club will do more damage than arrows. Bonemass also heals during a fight, so you need to keep up the assault constantly.

With the toxic attack doing so much damage, you’ll want to have plenty of poison resistance mead with you, so you should unlock the cauldron and fermenter long before you think about tackling this boss.

READ:  Valheim Starter Home with a Fire Pit that Doesn't Suffocate You

After defeating Bonemass, placing his trophy on the sacrificial stone will grant you a power that increases your resistance to physical damage. 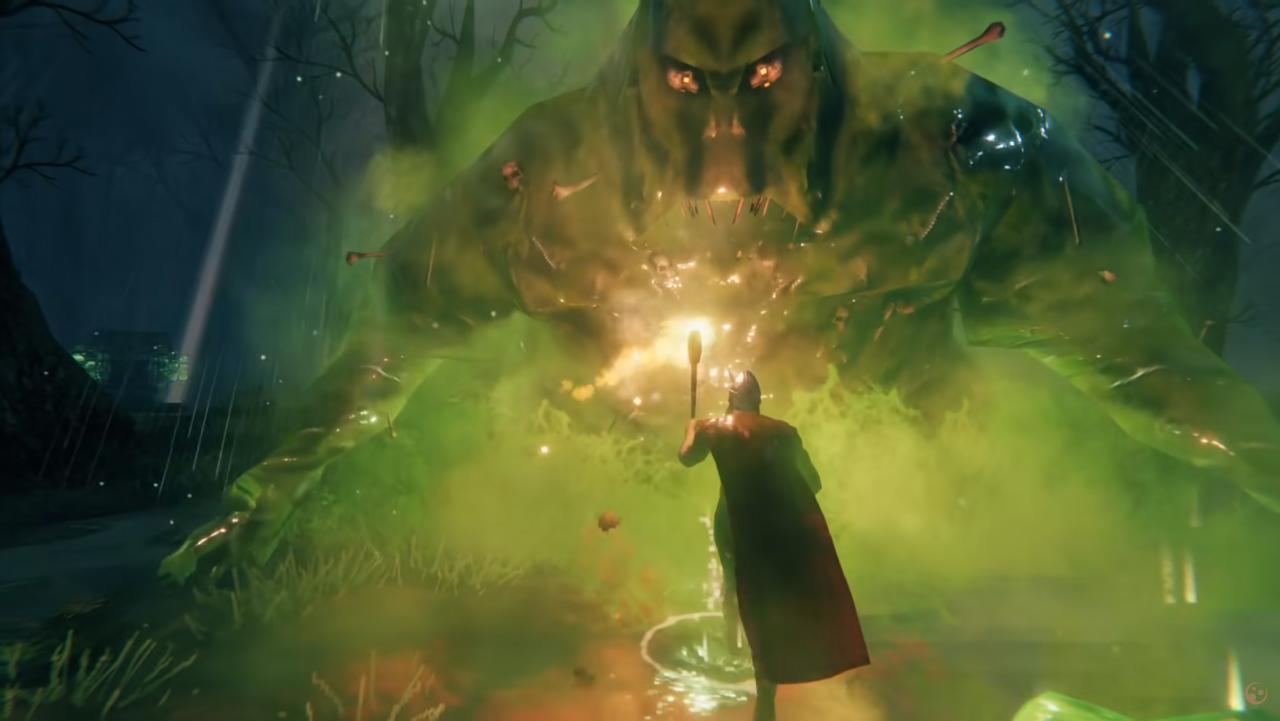 HOW TO SUMMON AND DEFEAT MODER

Biome: Mountain
How to summon it: Sacrifice three Dragon Eggs at its altar
Rewards:

Moder is the fourth boss in Valheim, a dragon (or wyvern) who can be summoned at the top of a mountain in the Mountain biome. To find Moder’s location, investigate stone buildings inhabited by draugrs in the mountains, and look for a runestone to interact with.

To summon Moder, bring three dragon eggs to her altar. Dragon eggs can be found in nests in the mountains (and they weigh 200 pounds each, by the way, so you’ll only be able to carry one at a time unless you’re playing with pals.)

Moder has several attacks. On the ground, she will swipe with her front claws for a melee attack. She will also use blizzard breath, which will slow players’ movement severely by freezing them if it hits. While flying, Moder can launch projectiles from her mouth that crystalize on impact.

You’ll need cold protection in the Mountain biome in general, and especially against Moder. Wolf armor, which can be crafted after hunting wolves and using the wishbone from Bonemass to find silver, will help protect you from the cold. Making frost resistance mead is a good idea as well.

Most of Moder’s attacks can be avoided if you’re quick with your dodging. You can spot Moder preparing for a breath attack and get out of the way. Her melee attack is also easy to see coming.

Attack from range with the best bow you’ve got and arrows that do damage over time, like poison arrows. Keep out of melee range while on the ground, but stay close enough that you can reliably hit her with your arrows until you take her down.

Placing the Moder Trophy on the sacrificial stone will give you a power you can use while sailing to keep the wind at your back no matter which direction you’re headed. 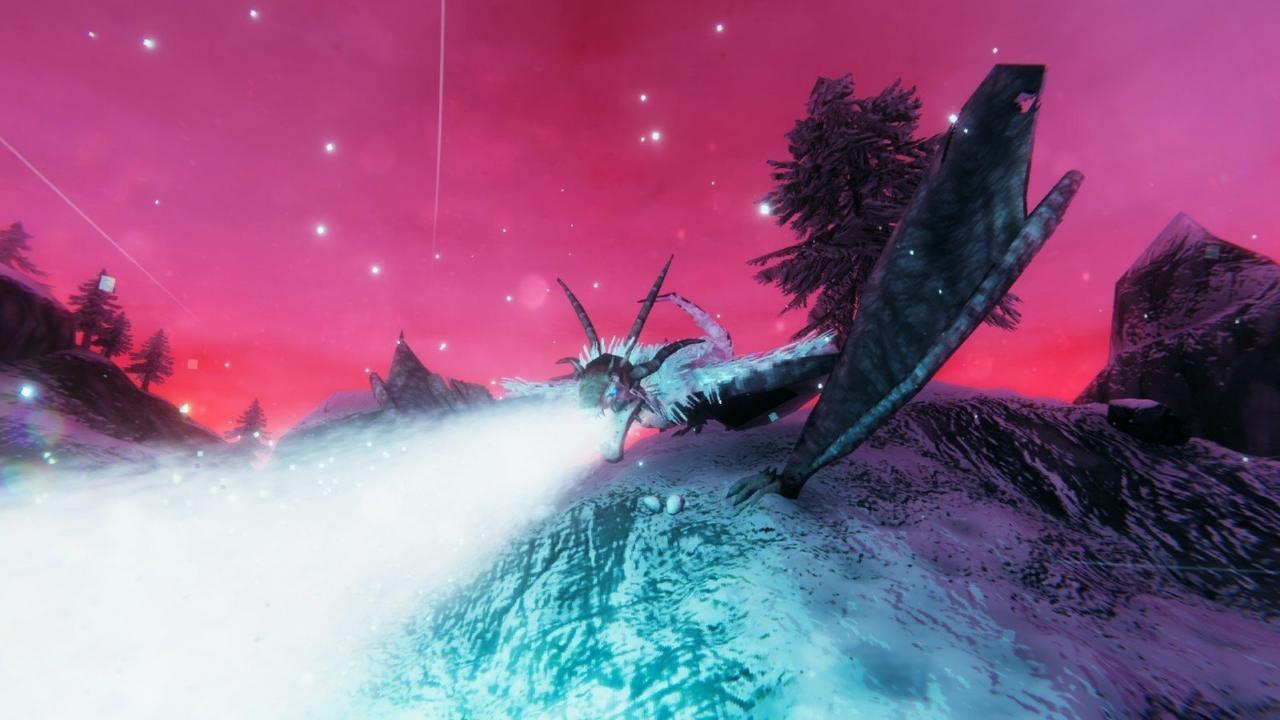 HOW TO SUMMON AND DEFEAT YAGLUTH

Biome: Plains
How to summon it: Sacrifice five Fuling Totems at its altar
Rewards:
READ:  Valheim Health And Stamina Explained

Yagluth is the fifth and final boss in Valheim. He’s an enormous skeleton wearing a crown. Yagluth has no legs or lower body, so he crawls after you using his big skeletal hands.

Yagluth’s location will be added to your map using a tablet found in some tall standing stones in the Plains biome. He can be summoned by using five fuling totems. Fulings are goblin-like monsters found in the Plains, and fuling shamans will sometimes drop totems when killed.

Yagluth has two fist attacks, one that causes damage in a radius of the attack, and the other that summons a shower of meteors upon the area. Yagluth also has a breath attack that acts like a flamethrower with a long range, turning while he uses it to sweep the line of fire across a wide area.

Yagluth is the final boss, so be equipped with the best black metal gear and armor possible, with plenty of food and healing potions. That said, as a boss, he’s pretty slow moving around. He telegraphs his attacks fairly obviously, rearing his head back before using his fire breath. His hand will glow blue before using his fist smash and orange before summoning meteor strikes, so keep your eyes open so you know what’s coming next.

As with some of the other bosses, it’s best to keep your distance and attack with bows at range, though if you’re playing co-op and Yagluth is focused on another player, it’s a great time to rush in for melee damage.

The materials Yagluth drops apparently haven’t been implemented in the Early Access game yet, so you can collect them but they may not actually serve a purpose at the moment. Placing Yagluth’s trophy on the sacrificial stone will give you a power that reduces damage from elemental attacks like fire, frost, and poison. 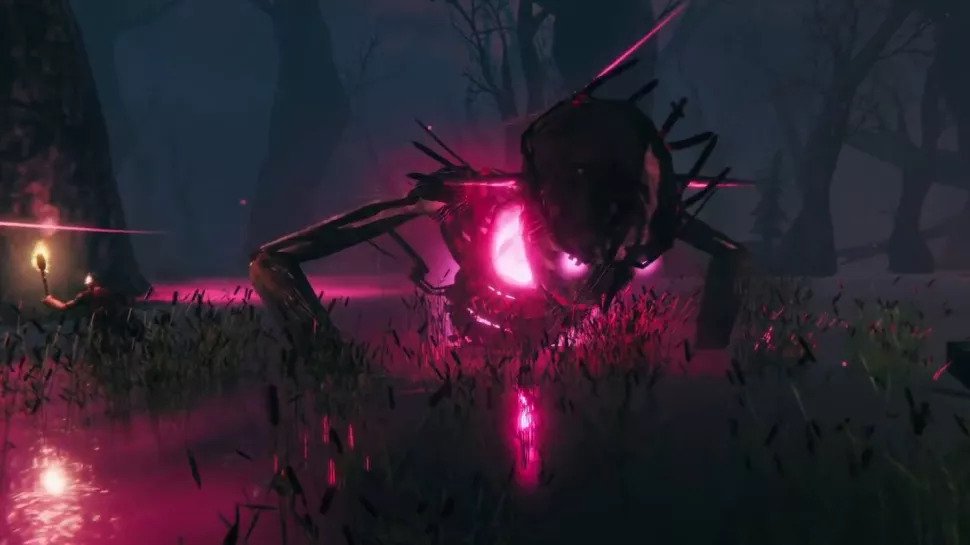 That’s all we are sharing today in Valheim How to Summon and Defeat Every Boss, if you have anything to add, please feel free to leave a comment below, and we’ll see you soon.
Credit to 『NAPTRIX』