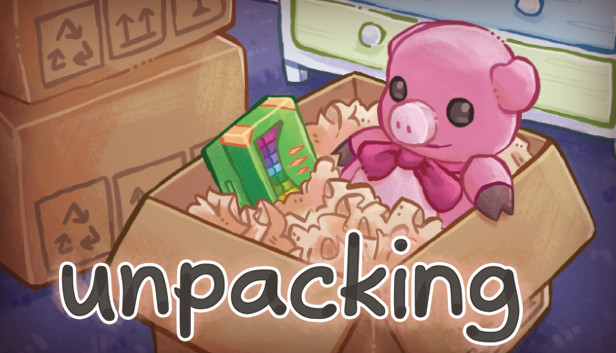 If you are going to play Unpacking, this guide will explain 8 importatn things you need to know before you play, let’s check them out. www.loans-cash.net

Unpacking is primarily advertised as a meditative and calm puzzle game that consists of us sorting through boxes of furniture and personal knick-knacks and arranging them into the room or the house we’re moving into. However, as you go further along, you’ll realize that these small trinkets and tokens all give insight into the character of the person we’re unpacking for, revealing a surprisingly story-driven aspect into the game. 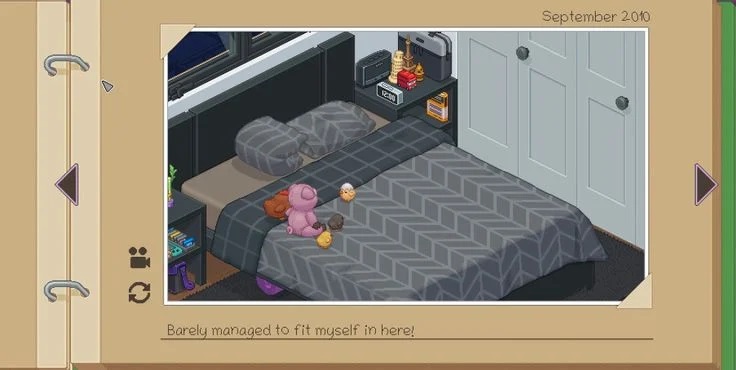 With the exception of the small entries we see being written down into the photo journal after we’re done unpacking a room, the game has no dialogue yet is able to convey a touching story just through our insights into the items that we carry with us over several moves, which items we add to our collection of stuff, and which ones we lose.

Minutes Will Turn Into Hours

The premise of Unpacking is fairly simple: unpack boxes of things into the rooms available to you to finish a level. But as you take each item out of the boxes, you’ll find yourself caught up on tiny details that bring nostalgia, happiness, sadness, and an entire array of emotions you never thought you could get from unpacking a virtual room. 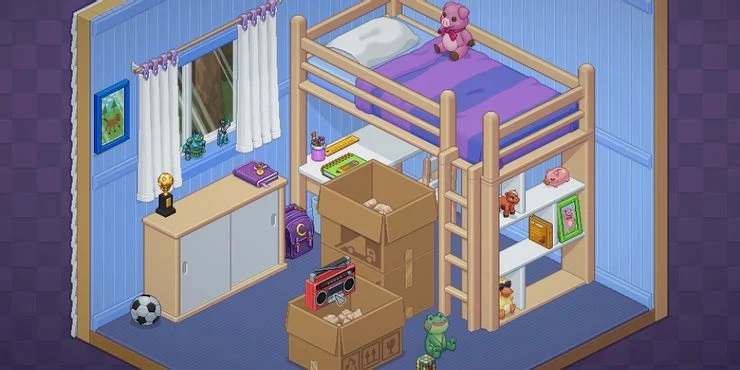 The mix of the game’s adorable graphics, as well as the attention to detail in the game’s sound department, will also immerse you into the experience of moving. Placing items on different surfaces creates different sounds, the little victory audio byte when you’re done with a room, and the game’s overall relaxing music is more than enough to keep you unpacking for hours.

If you’ve ever had to move and pack up, you’ll know that the process of organizing your belongings into boxes is both a tiring but also messy experience. Try as you might, there will always be some stray items in boxes that don’t belong.

This is shown in Unpacking as well, where boxes in each room consist of items mainly dedicated for that area, but sometimes you’ll find a stray. Whether it’s a singular shoe, a random spice, or a keyboard that definitely should not have been packed with kitchen utensils, the little mix-ups in boxes add a new depth of realism and human error to the game.

There Are “Right” And “Wrong” Spots

The puzzle aspect of Unpacking only shows itself when everything is taken out of their boxes and placed somewhere in the world. With an audio cue that marks the end of your unpacking session, you move into the organizing section of the game. Items will flash red if they aren’t placed in an area that doesn’t line up with the game’s predetermined “logic” of where the items should be placed. 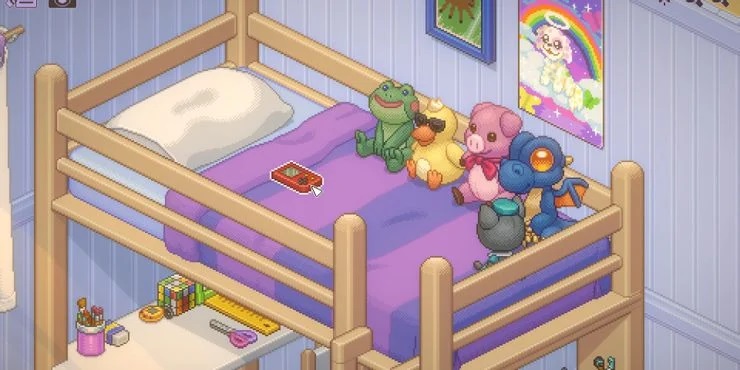 For some, this is a nice puzzle to figure out just where exactly the game wants you to place certain things, but for some, this comes more as an annoyance. If you want to play the game without the worry of “right” or “wrong” placement, you can easily toggle the “allow items anywhere” option to remove the puzzle element and progress as usual.

At its essence, Unpacking is a game that makes the chore of moving into a new place just a little bit more satisfying and fun with its sense of personality, background music, and overall sense of satisfaction and accomplishment when you finish a level. However, In a world where money is kind of tight for everyone right now, the idea of a 20-dollar price tag for a fairly short game might be a deterrent for some. 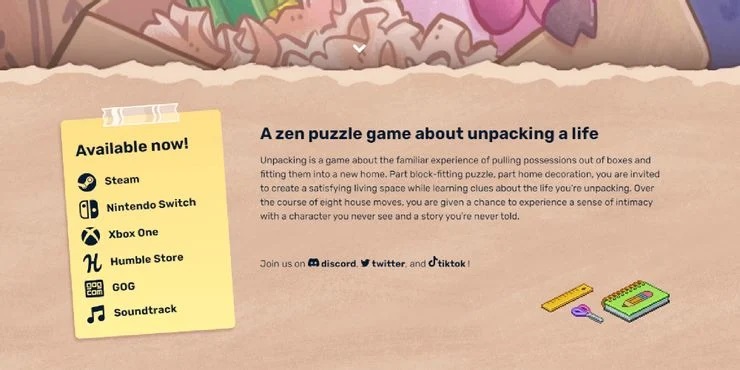 Luckily, Unpacking is included in the Xbox Game Pass, which is only $9.99, which covers not only Unpacking, but gives you plenty of other games included with the pass for you to experience when you’re done with the game.

A Little Bit Of A Guessing Game

One of the beauties of Unpacking is its minimal amounts of text, which means less reading and more doing. A result of this, however, is that there aren’t any labels for the items you pick up, so sometimes you’ll be confused by what this blob of pixels you just picked up really is. 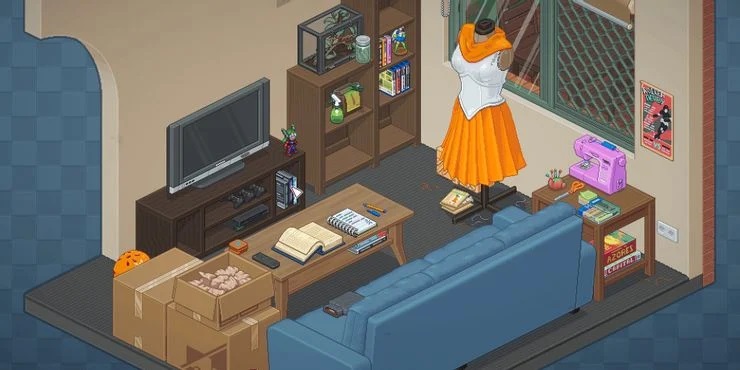 This is where Unpacking becomes a slight guessing game. Oftentimes, you’ll recognize what exactly it is you picked up, after all, a computer from the ’90s is fairly hard to not recognize, but sometimes you won’t be able to tell. At these moments, just have the item in your hand and hover over different surfaces, and sometimes the change in angle or placement will be just enough to let you know what it is you’re holding.

It’s Both Meditative And Stressful

As you play through the game, you’ll definitely get into a rhythm as you get more familiar with the items that your character carries with them. Figurines go on the nearest shelf, books get sorted by height or type, and more patterns that you begin to set for yourself, which gives a very enjoyable feeling of zen and calm when you get into these habits. 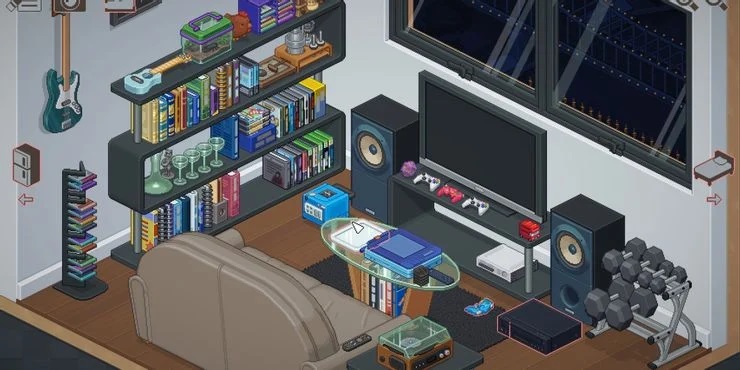 However, as you get deeper into the game, you’ll have more and more items that you have to fit into your home, and sometimes you’ll realize that there really isn’t enough space for the sheer amount of figurines and sketchbooks that you have. Eventually, you’ll encounter some close calls and moments of stress where you struggle to figure out where exactly you’re going to fit this extra bottle of face wash, but it adds to the enjoyment for anyone who likes having a little challenge to the game.

With the added element of achievements in the form of stickers that give extra insight into the game’s storyline, you get to live the best of both worlds and enjoy the satisfaction of seeing your living space become yours while watching your character grow through the ’90s and into the 2010s. 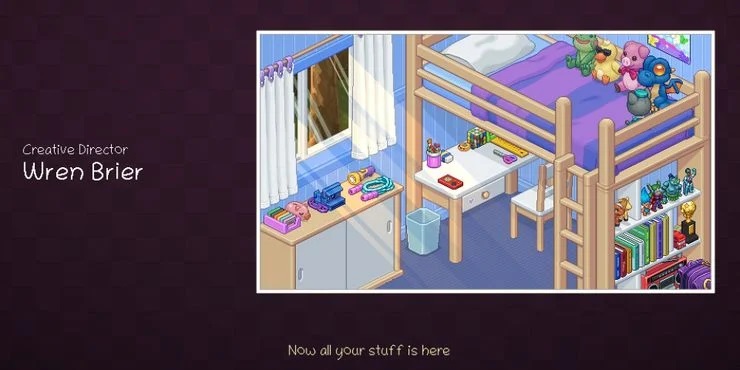 At its core, Unpacked is a game that consists of eight house moves of varying sizes and time spent, totaling an average of four and a half hours of game time to play from start to finish. Chances are though, you’ll want to go back and play through at least one more save to finish your sticker collection and unlock all the achievements in the game.

That’s all we are sharing today in Unpacking 8 Things You Need To Know Before Playing., if you have anything to add, please feel free to leave a comment below, you can also read the original article here, all the credits goes to the original author PeepieyS