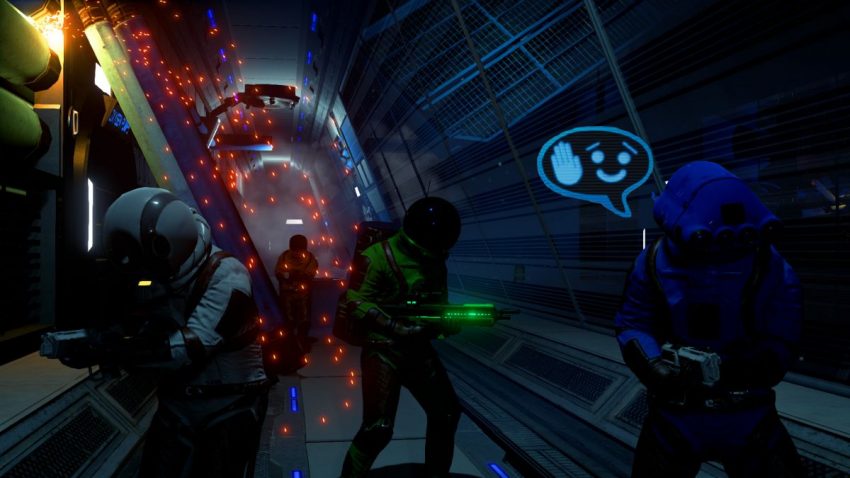 If you play Unfortunate Spacemen and want to know some advance tips for the game, this guide will explain Spaceman perks, monster archetype, tips and tricks, let’s check it out.

As I mentionned before this is not a basic guide. If you read this it means that by now you should’ve read most if not all perks for the spacemen. So I will go ahead and present formulas for different survivability scenarios and different playstyle.
As of today avoid the Action Hero Perk at all cost (2020/06/30)

Oxygen tank – You’re going to spend a lot of time outside.
Flash Grenade – Just in case you encounter the monster. So you can run fast.

Off to the next one, I have to say. This guy is good in a group, he helps with escaping, locking the monster somewhere. Just being a general annoyance to the man behind the monster. As such these are the following perks that can be use as the support.

To still be able to carry your weight
Nanobots – Antobodies – Welder

Useful items:
Flashbang – Giving your team a way out
Map Scanner – To help them find the last egg and follow the monster
Syringe – To reveal someone as the monster / Heal your teammates

Here comes the men the real ones. The space spartiats. With these the monster will be unable to win any fights. Staying as a tight group or as a solo roamer with a power weapon these guys run around without a F to give. Be wary. Most of them are trigger happy.
As you notice here I have my favorite but there is a good reason. The Hunters are roamers they are all over the maps looking for eggs to seal, looking for traces of the monsters. Great at escape route.There are multiple playstyle for Hunters so we will go 1 by 1
Perks :
The Tank
Nanobots – Blast Shield – Space Milk
Survival, its what this game is all about right? Well don’t look any further this guy is the man with the upmost protection looking for the next fight with the monster. He knows he can take him

The Wary
Magnetic Boots – Blast Shield – Space Milk
A little less defensive than his predecessor, Magnetic Boots stops you from falling into sudden traps or pushes.

The Runner
Springy Steps – Blast Shield – Spacemilk/Nanobots
You can’t really expect to outrun him now do you, with little to no protection this guy will roam around the map with most likely a shotgun just awaiting to shoot the monster in the face.

F*ck it
Nanobots – Springy Steps – Space Milk
You have no survivability here except for the space milk. and once that is done. You’re halfway dead already. But why is he in this guide then… Well simple. Some people are insane.

Welcome to the second part of this guide. These are general tips, usually unknown to new players.

The Syringe can reveal the monster: Yes! Unless he has the perk to counter it, you can shoot the monster and he will have to transform.

Noise Grenade are scary: Some monsters are scared of gun fire. If you have 2 or 3 guys throwing grenades towards you your first move will be to run. The only real danger here is going to be your bleeding ears.

Flashbang can reveal the monster: Also yes! Please grenades can all be useful dont waste them!

Flamethrower can hurt a burrowed monster: Take the flamethrower. Spray where he is burrowed. Wait for it to escape.

Pushing the monster can help when locking door: In the mists of it most player forget about this, you can push the monster to give you a head start, or simply lock the door behind you without being scared of him entering the room at the last moment. Also works with welding

Facehugger can only be shot: Was tested. Syringe do not work. (Health station do if you can find one) the only way to remove a facehugger is definetly to shot it down.

Springy Steps can help you get the Power weapons faster than others: Don’t abuse it to become one of those : “All the power weapons are for me”, you’ll get shot. Ill shoot you.

If you suspect someone of being the monster Say it: Its a deception game, usually the monster will get defensive if you accuse him. And if it was him he will try to attack you. And if somehow you die. They will know, they will avenge you.

change direction: This is not a movie. When being chase run like an idiot, if you don’t know what you’re doing neither will the monster. Go back towards him too. That confuses them the F out.

Activate airlock and sit on it: If your death is imminent either jump off and hope for the monster to follow you, or activate an airlock and try to bring him down with you. Its your last hope. Die a hero.

Last egg: If you can’t find the last egg call out the person with the map scanner to guide you if he brings you anywhere but there shoot him its the monster.

Map Scanner: Monster tend to go for map scanner for the above reason. Be wary of ANYONE with one.

In a 1v1: Get the vision enhancer as fast as you can, spot one on the map in the early game. It’ll give you a decent advantage especially if you have some power weapons.

EME push: The monster can also be EMEd in a far away land. Run around one until you think its the perfect moment

Mostly this game is about timing, get your timing right. You’ll win

Please before we start be aware of your monster archetype not everyone plays it the same. Not everyone react the same. This guide will cover the common ones, but you should find your own playstyle in time.

Welcome to the archetype part of this guide. This will show you some common monsters with their respective name.

AGAIN Depending on the map, some things can be change

Are you one to want to blend in? Would you like to never be detected? Then the shadow is for you. The shadow offers any tinkable way so you don’t get found out. This monster will remain with the human and trick them into fighting one another.

The Blast shield is there because you’re gonna want to drag the game as much as you can, and as such the possibilities of having a bazooka or Nuke shot at you are higher.
Antibodies is the anti syringe.
Springy Steps are there to help you grab a power weapon faster.

As this you’ll have to want to get tested as much as possible. Create confusion, shoot at bots to make them shoot back. Anything you can think of. Do it.

There is a good reason for this monster name, it is INSANELY fast. No human can follow, between the dash and the void. Good luck, it will disappear in a moment.

This monster excels at escaping groups between the void dash and the dodge it can do across the map jump without any efforts. The nocturnal perk is there to give you a more sustainable damage throughout the game.

As for the human form, It is massively for survivability and power weapon grab. Missing the spacemilk but honestly you already have 2 lifes as Usain Bolt. Just transform and dash away like a superhero.

Acid is massively underrated. This Archetype will show you all wrong on your thoughts.

There is a simple reason for all of this
Titanium Claw + Nocturnal means a massive damage output with your claws. Combined with the acid bombs its a 2 hit kill if not a 1,

Remember that your egg can hurt you, its why as human you have a maximum amount of survivability by having all 3 survival perks for yourself. Place an egg next to a power weapon grab zone. You’ll see.

Ghoul are corpse eaters, and so are you. But you’re insanely more fun. I guess?

Remember the Ghoul is a Solo/Duo picker fairly easy to join kill someone, eat him and disappear. The claws let you get away faster and the ink covers your tracks.

As for the Spaceman the welder will help on some map to help you recover and eat some dead bodies while they are busy destroying the door. The 2 other perks are self explanatory

Here is the long awaited moment the tips on how to be a good monster.

– Try as much as you can to get the flamethrower, your biggest threat, your best ally.

– Disguise, switch disguise so often that they won’t know where to look. Play as someone who is still alive, make them do monster things and change to someone else, change to a bot and disappear. Your best way out is to blend in and wait for a perfect moment to escape. Stop running. Become one of them.

– You don’t need to be at every power weapon grab, sure its useful, but honestly, just find the one guy running around with the Rifle or shotgun and kill only that person, people rarely look at what a dead person had for weapon. Go back to it later and get it for yourself.

– Be cunning, accuse people, make them shoot you and run away, lock people in rooms. activate airlocks. Push people into EMEs. There are so many ways to kill other than being a giant monster in people’s face, be creative, most people are gullible tell them to stay still so you can check their name. They will stop. And you will shot.

– Egg the world, people tend to forget about this. but your egg are really good friends. Use them as such.

– Burrow makes you a still target, do is as little as possible. If you tend to do it too often and die change to a void beast. You’ll thank me later.

– Don’t be scared to transform mid fight. You have 4 times the hp of a normal spaceman. Use it to your advantage.

– If you’re spotted because of your power weapon, find a spot and drop it away from prying eyes. You’re now back to a normal spaceman looking for the monster.

That’s all we are sharing today in Unfortunate Spacemen The Advance Guide For Beginners, if there are anything you want to add please feel free to leave a comment below and we’ll see you soon.