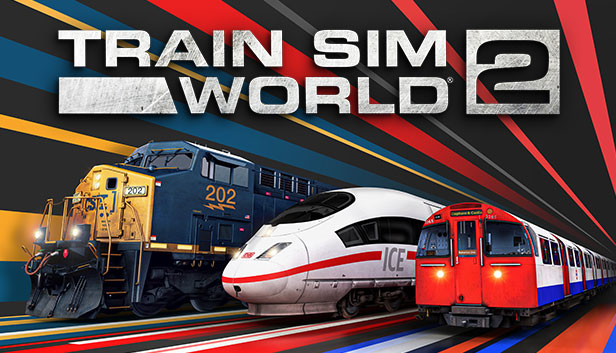 For Train Sim World 2 players, this guide is an introduction to the newly released Cathcart Circle DLC, including the BR Class 314, Signalling and safety syste, let’s check it out.

The ‘Cathcart Circle Line’ is a general term given to the suburban railway lines between Glasgow and Newton/Neilston. The route was built in stages between 1885 and 1894. Electric services started with Class 303 (so-called Blue Trains) EMUs in 1962. For many years the Class 314 EMU has been the primary traction on the route, but since 2016 Class 320, 380 and 385 EMUs have been introduced, with some Class 318 and 334 units as well. In Train Sim World 2, both branches and the circle are represented, with the Class 314 EMU in ScotRail Saltire livery (though it is livery designer compatible), allowing for a network-style route not before seen in the game.

A PDF version of this guide can be downloaded here: https://forums.dovetailgames.com/threads/cathcart-circle-quick-guide.41502/

Built by BREL York in 1979, the 16-strong Class 314 fleet was exclusively used on suburban services around Glasgow, initially on the Argyle and North Clyde lines, but later on services in south-west Glasgow. The Class 314s are part of the BREL 1972 family, which is also made of the similar Class 313, 315, 507 and 508 types – all of which shared very similar body shells. They have a maximum permitted speed of 75mph, 120km/h.
The Class 314 units were withdrawn in 2019 as they were not compliant with People of Reduced Mobility (PRM) regulations which came into force on 1st January 2020. 15 units were scrapped, with one (314209) held back for trial conversion to hydrogen power, as part of a feasibility study running alongside ScotRail’s commitment to withdraw all diesel traction by 2035.
The Class 314 in Train Sim World 2 comes in ScotRail Saltire livery, introduced since 2008 and would eventually be applied to all trains operated by the holder of the ScotRail franchise, including those operated on behalf of Strathclyde Partnership for Transport (SPT), which, at the time, had its units in a carmine and cream livery. Though most of the Class 314 fleet still wore this livery when they were withdrawn in 2019, it was not included in the pack. 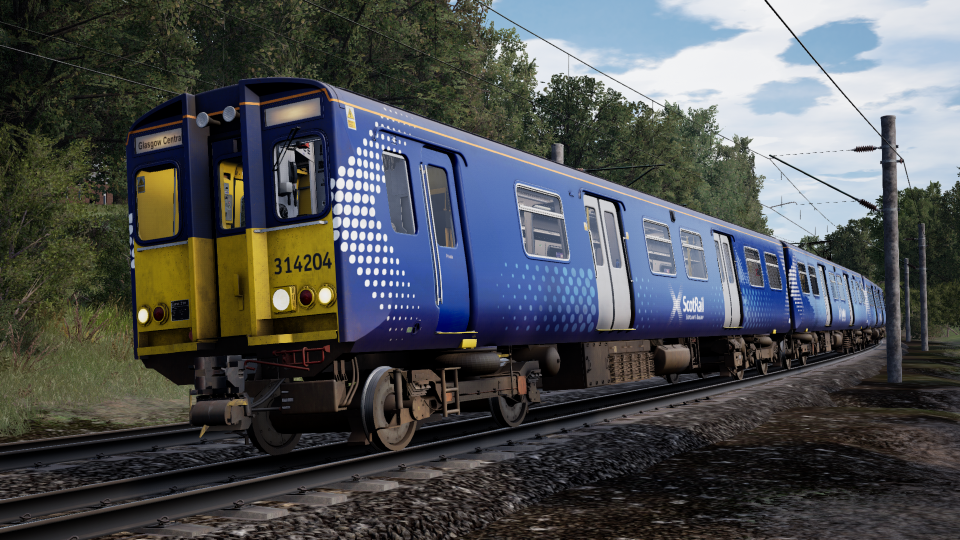 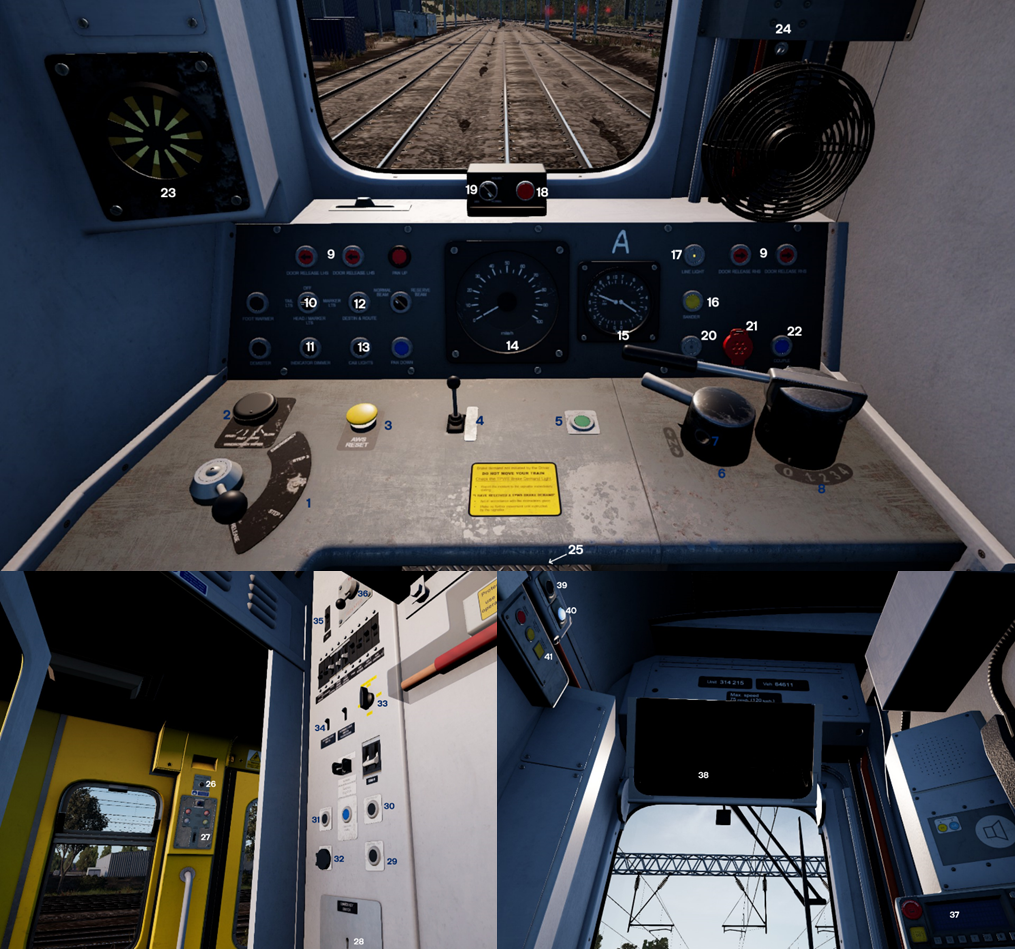 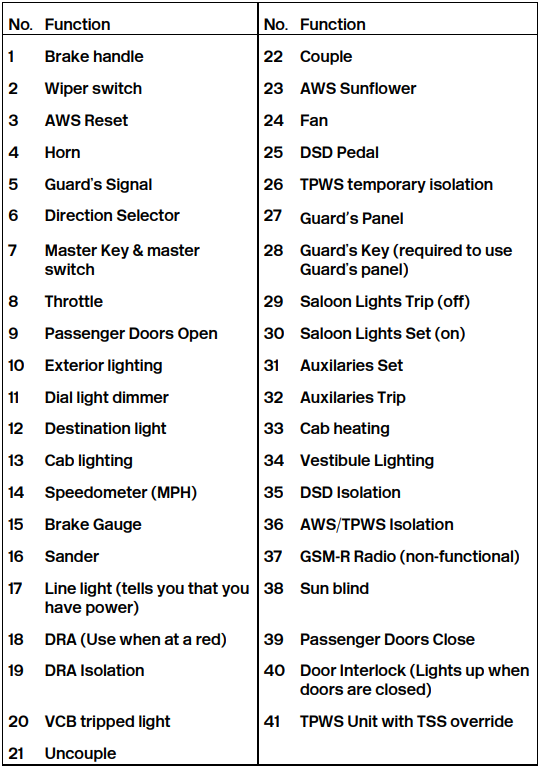 In order to set up the cab at the start of service, the following steps should be taken:

In order to shut down the cab; 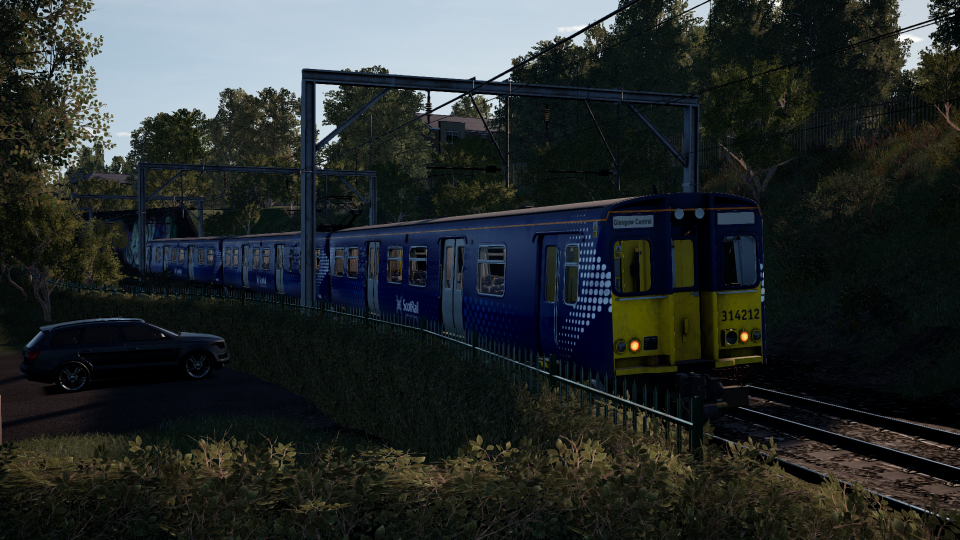 The Class 314 features a 3-step brake, similar to what was fitted to many
new EMUs and DMUs in the 1970s and 1980s. This means you have 3 set
steps of braking, plus release and emergency. You can see what the
brakes are doing using the small gauge to the right of the speedometer. 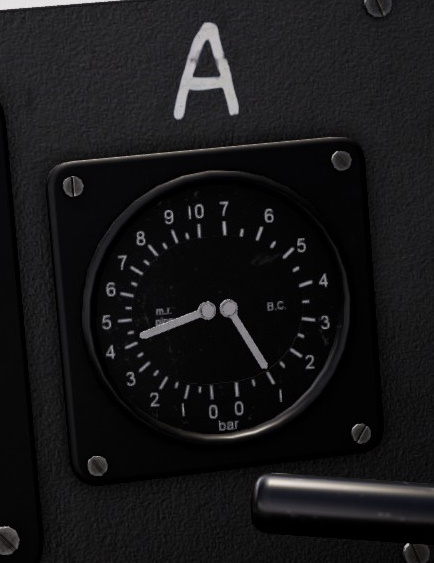 The needle on the left indicates the main reservoir pressure (MR). This must read above 6 bar for the brakes to work properly. If it drops to below 6 bar, the compressor will automatically kick in to bring it
back up. The right needle is the brake cylinder pressure (BC). This tells you how hard the brakes are applied.

If the BC reads 0, the brakes are released. The higher it reads, the harder
the brakes are applied. Note that the Class 314 uses blended rheostatic
braking, so the motors are run in the opposite direction to slow the train
down, with a little bit of normal braking. As such, the BC will be low
(typically below 1 bar) until the train is close to stopping.

To perform a brake check on the unit, while stationary and with the
passenger doors closed:

For a full guide to braking in TSW, please watch this: 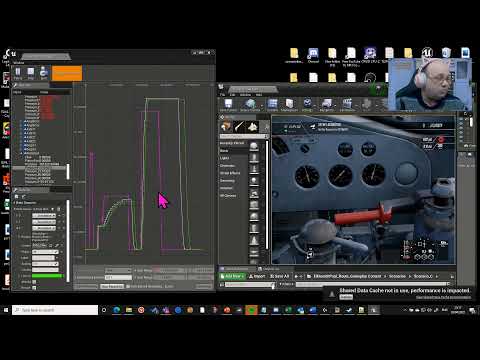 The Cathcart Circle line is about 22 miles in total, with a small extension to Shields depot. Below is a not-to-scale diagram of the route. 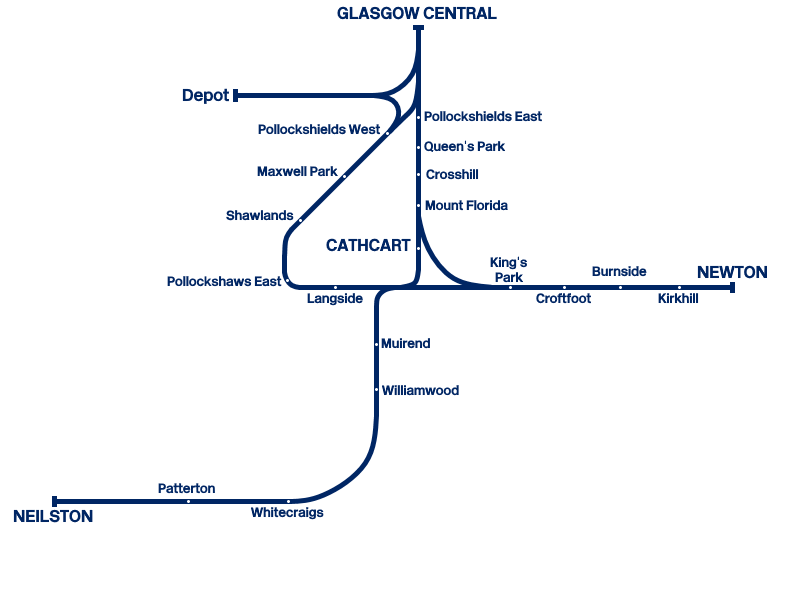 The route comes with 6 scenarios and 2 tutorials. 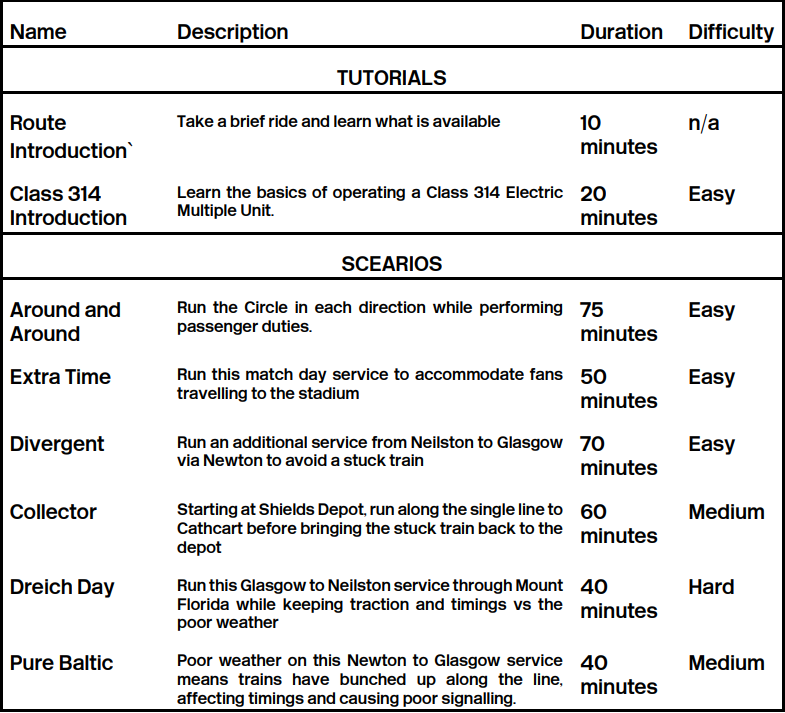 ` The route introduction automatically plays when the route is loaded for the first time.

Since the mid-19th century, the UK has employed a system of route-based block signalling, where drivers are told the route that they’ll be running on, unlike the speed based system employed in Continental Europe, where the driver is told what speed they should drive at.

NB: This guide will talk about the systems employed in the Cathcart Circle DLC only; it is not generalised to the whole system. For a fuller picture of signalling in the UK, please watch this video:

It’s from 1989 and while the signals nowadays often look different, the principals are the same.

Signals in the UK can display up to 4 aspects (colours), these are:

Some signals are incapable of displaying a double yellow. These are generally deployed where the speed limit and route type is such that preliminary caution is not necessary. 4 aspect signals, however, can be deployed in areas of low speed limits, such as on the approach to a terminus. 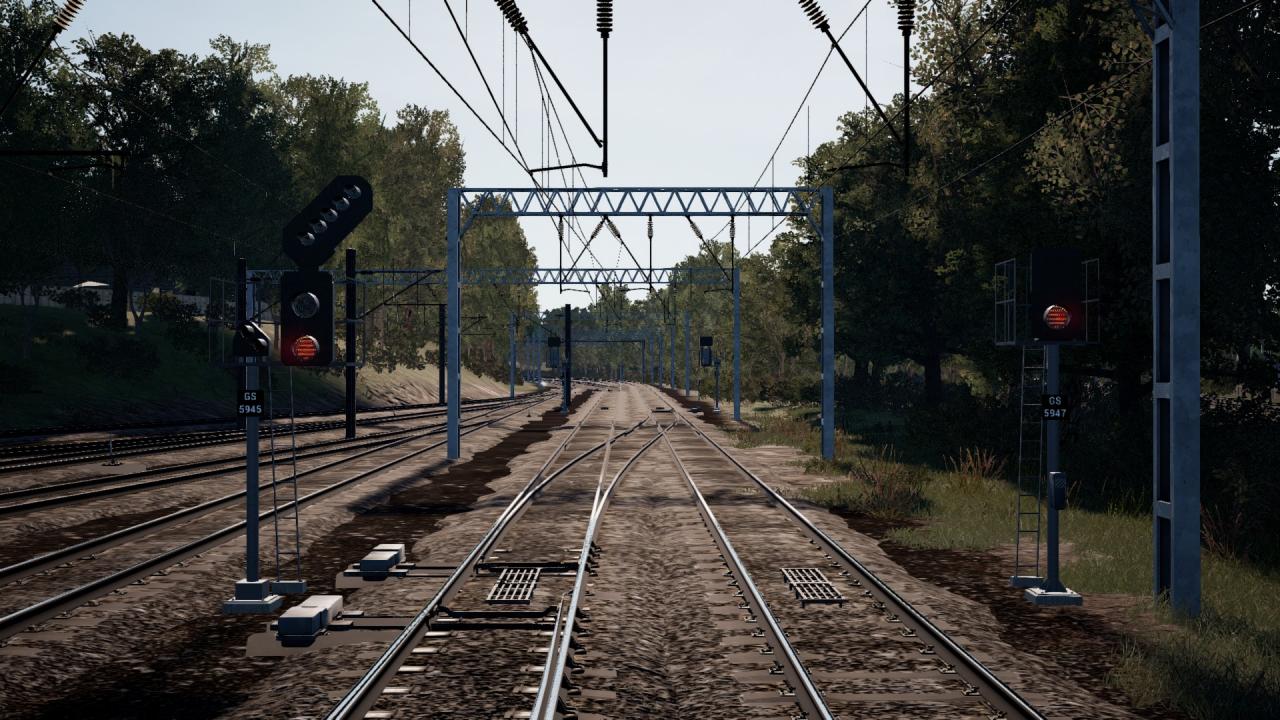 Above are 2 examples of the newer LED signals. The signal on the left is a 4-aspect signal (it is capable of displaying extra information – we’ll get to that in a bit though), and the one on the right is a 3-aspect. LED signals use the same light to display each aspect, unlike bulb signals, which look more like a standard road traffic light. 3-aspect signals cannot display preliminary caution. 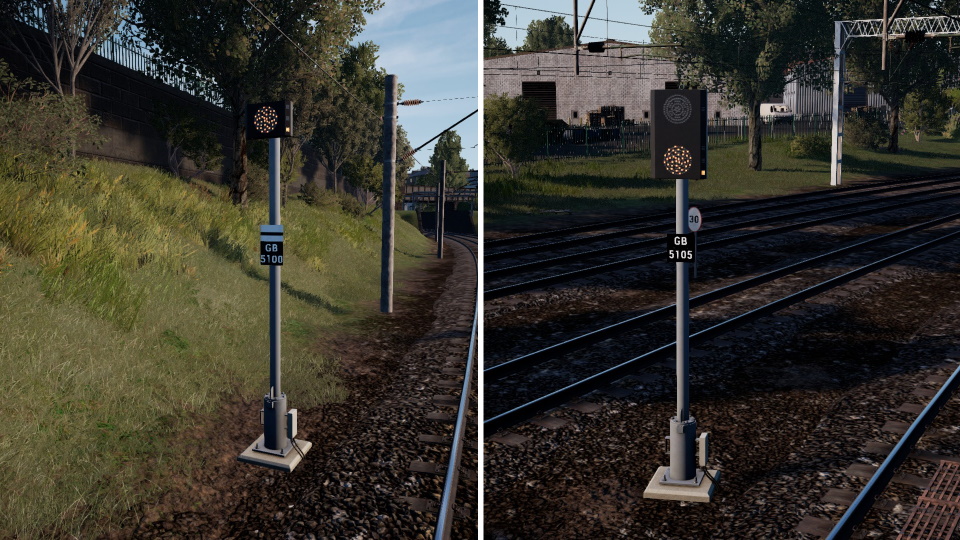 Above are examples of VMS type signals which are found on a lot of the route and feature extra indication as to the aspect it is displaying to the right of the signal itself (the small red square in the above images). These can be of the 3 or 4 aspect type.
To indicate a route a train is set to take, signals can be fitted with angled lights (feathered signals) or a digital display (theatre signals). 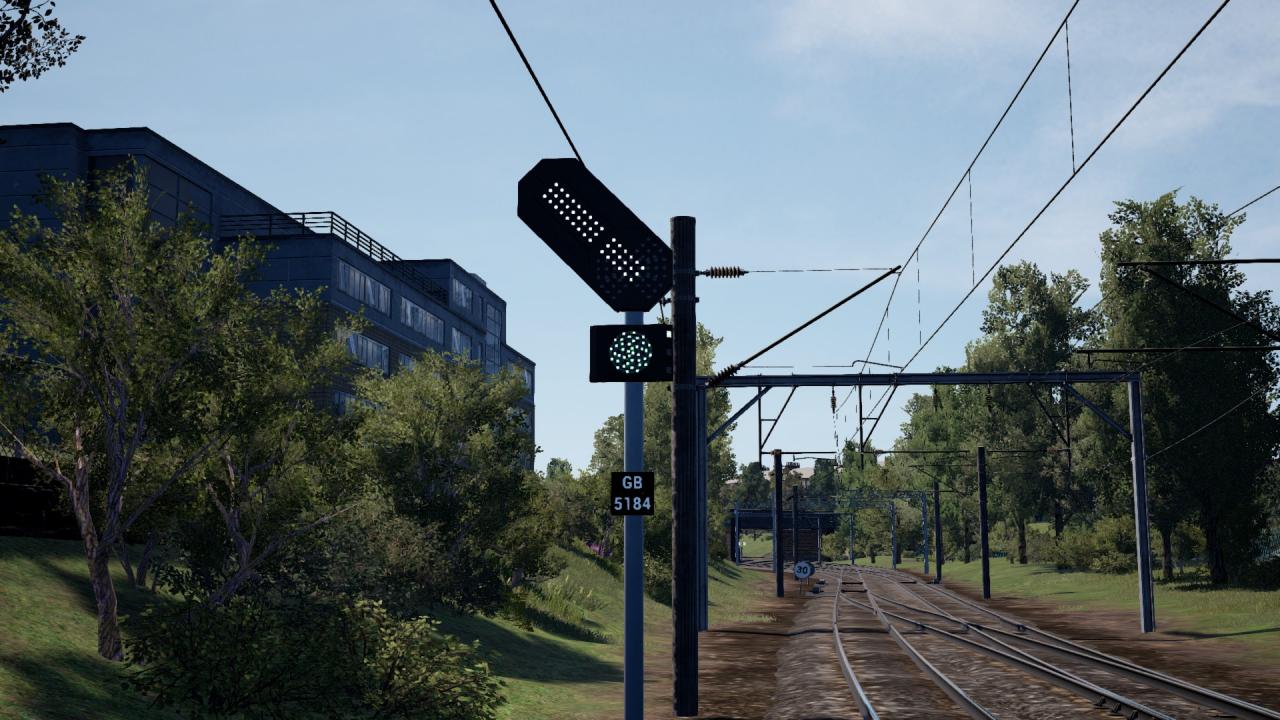 A feathered signal looks like this and uses a series of lights to indicate the route. 7 paths can be shown using these. The diagram below illustrates what each feather means. 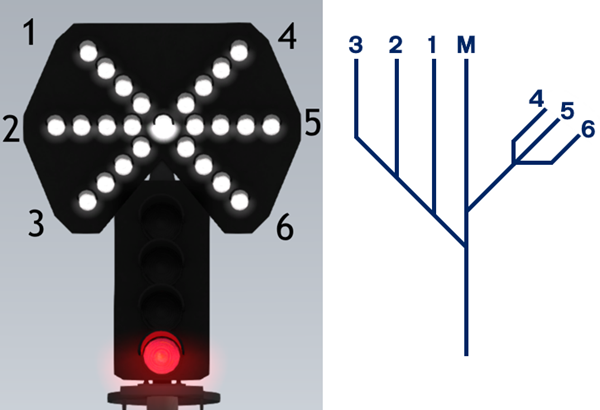 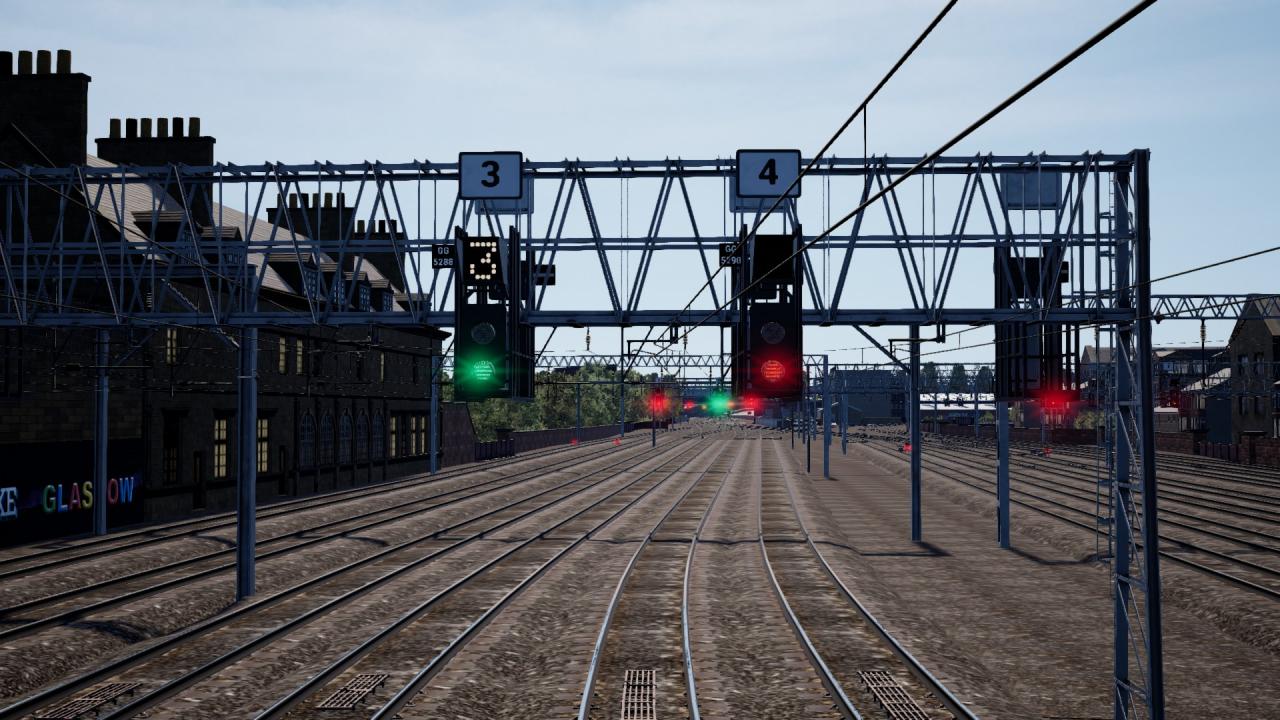 Theatre signals use digital screens to display alpha-numeric codes to indicate to the driver which path the train will take. As there are a theoretically infinite number of possible paths, it’s impossible to list them all, but here are some common ones:
– S: Siding
– B: Branch
– C: Cathcart (this route only)
– UM: Up Main
– DM: Down Main
– A number will typically indicate a platform, or, in the case of the above, a numbered track. 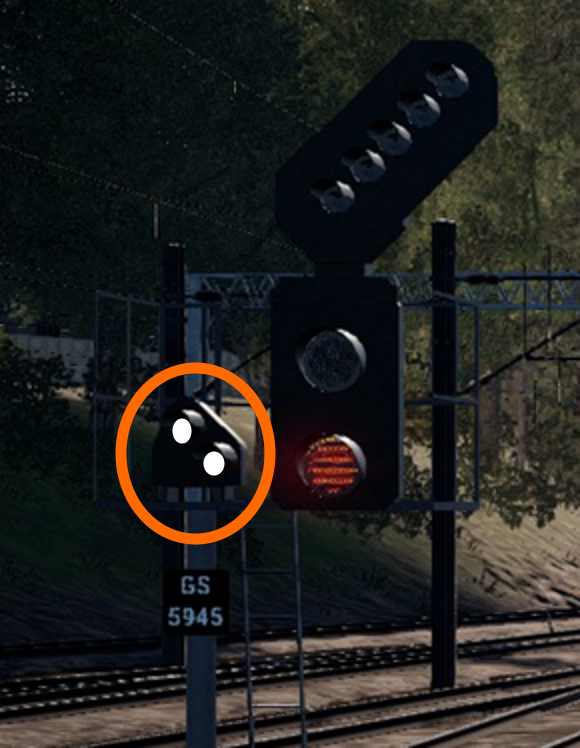 Sometimes it is necessary to pass a signal at danger, for example, to enter a platform already occupied by a train in order to couple to it. Where this is common, a ‘call on’ is provided, which will illuminate two white lights at 45 degrees, as seen on the left, once permission has been obtained from the signaller.

If a call on is not provided and a signal must be passed at danger (such as in the ‘Collector’ scenario), the signaller will provide instructions to the driver. In this case, the train’s TPWS Train Stop Override must be used if TPWS is enabled. This will prevent a brake demand penalty brake application. 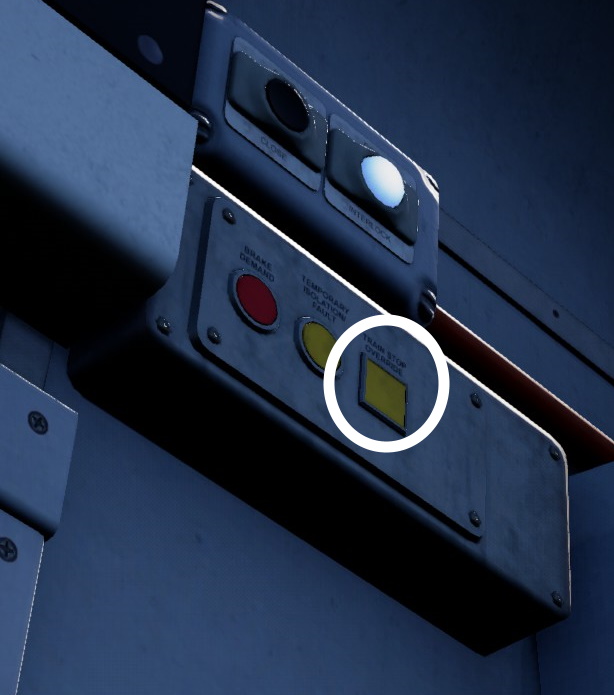 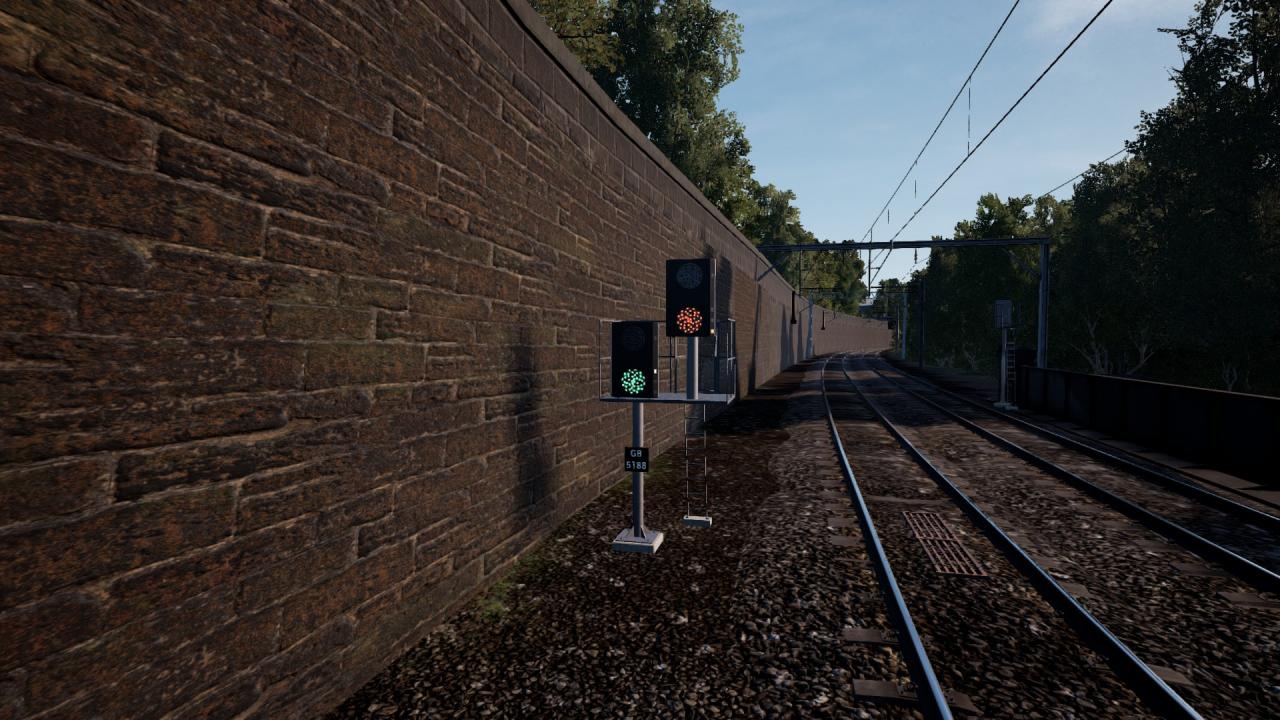 By modern standards, the Class 314 is fitted with rather basic safety systems. Like all trains on the UK network, the Class 314 is fitted with AWS as standard, TPWS was fitted later. The unit is also fitted with a DSD, but not a DVD. It also has a DRA. In reality, these systems should not be isolated while the unit is in service – it must be taken out of service immediately if any of them do. However, in the game these are defaulted to be isolated to allow newer players to drive the train without getting seemingly inexplicable alarms and automatic brake applications. Below is detail on each of these systems.
AWS

AWS (Automatic Warning System) was developed in the 1960s as a means of relaying the signal aspect to the driver – it is itself based on an earlier system known as ATC developed by the Great Western Railway in the very early 20th century in response to the 1900 Slough Rail Accident, where both the driver and fireman failed to see 2 danger signals which would’ve prevented the express train they were in charge of hitting another train that had stopped in the station. The main difference between ATC and AWS is that ATC relied on physical contact, whereas AWS relies on magnets (pictured below) placed approximately 200m from the signal, but can be closer if necessary. 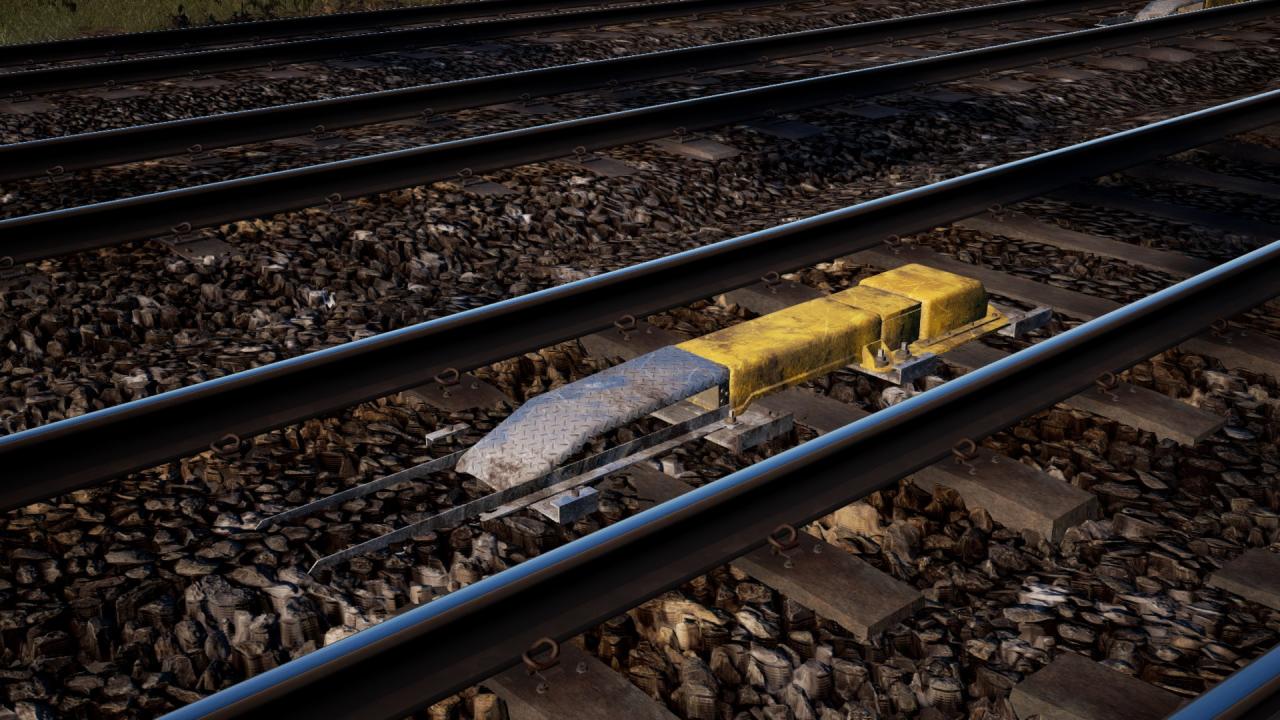 If, and only if, the signal ahead is displaying a clear aspect, a bell will sound in the cab, otherwise a monotone warning horn will sound. This must be acknowledged within 3 seconds, otherwise you’ll be given a penalty brake application.

After the train has stopped, you will need to wait a few minutes until the brakes can be released again, when the TPWS brake demand light goes out. Some magnets are permanently armed so will always give a warning tone. These are typically placed in front of speed restriction warning boards, also known as Morpeth boards, if the drop in speed limit is great enough.

The Train Protection & Warning System (TPWS) was developed in the late 1990s after it became apparent that fitting the entire network with Automatic Train Protection (ATP), as seen on the Great Western Main Line and Chiltern Main Line, was not practical.
Unlike ATP, which is meant to prevent trains passing signals at danger all together, TPWS’s primary function is to mitigate the consequences of trains passing red lights, though is not to be confused with the earlier Moorgate Protection (employed on the London Underground) and Indusi (German system employed on the Tyne & Wear Metro) systems, which use electro-mechanical technology. TPWS uses a transmitter mounted to the tack.

Two types of TPWS are employed. The Train Stop Sensor (TSS) grid (below) is fitted to the track, next to signals, and if the signal is at danger will induce an emergency brake application if a train passes over it (provided the train is also fitted with TPWS). 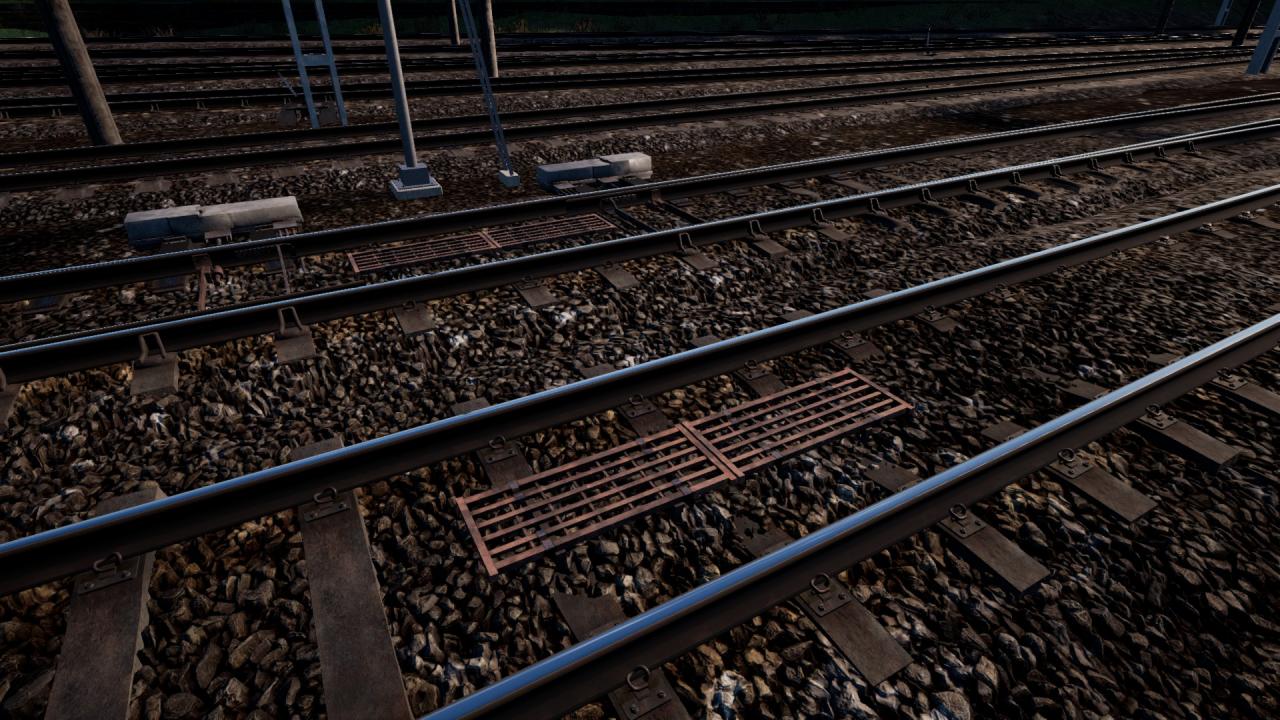 The second type is the Overspeed Sensor (OSS), which is fitted in particularly high-risk areas, such as on a high speed main line, or where many trains are likely to be running in a short space. These are placed in advance of the signal, and in advance of some buffer stops, to stop a train if it is going too fast. This system uses two smaller grids placed apart from each other. 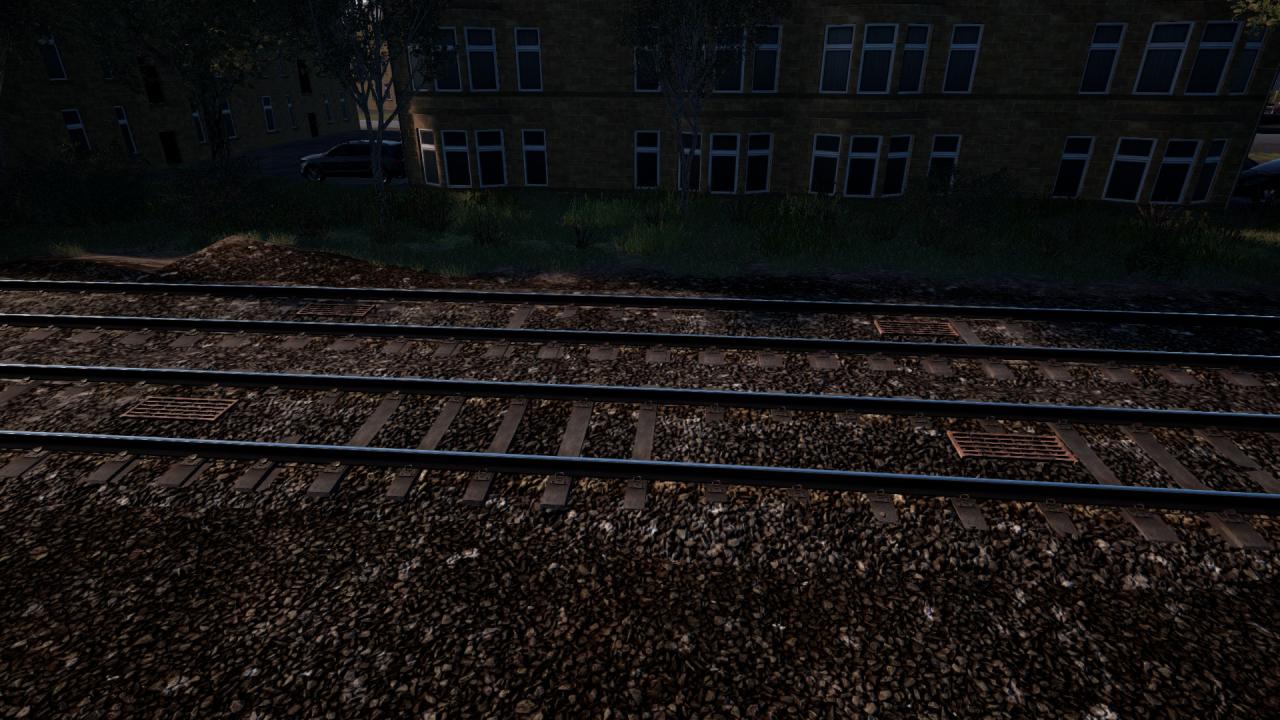 TPWS OSS is not currently functional in Train Sim World 2.

A Driver’s Safety Device (DSD), also known as the dead man’s pedal/handle is provided. This is a very simple system. The driver must apply pressure with their foot on the pedal at all times while the train is moving, else the train brakes will apply (they will release as soon as pressure is re-applied).
The Class 314 is not fitted with a Driver Vigilance Device (DVD), where an alarm (which must be acknowledged) sounds every 30-60 seconds.

The Driver’s Reminder Appliance (DRA) is provided in the cab. It is designed to be used at stations where the starting signal is at danger, or non-existant. The DRA will prevent power being applied when activated, to remind the driver of a potential danger signal ahead. Another method drivers use is to put the train in neutral in conjunction with the DRA in such situations.
Remember, after doing platform duties – Signal, Platform, Signal, Action.
– Signal: Check the signal aspect.
– Platform: Check the platform to ensure it’s safe to depart.
– Signal: Check the signal again.
– Action: Move the train if the signal allows.
This training video from the early 2000s contains a good example (the first one) as to when and why you should set the DRA: 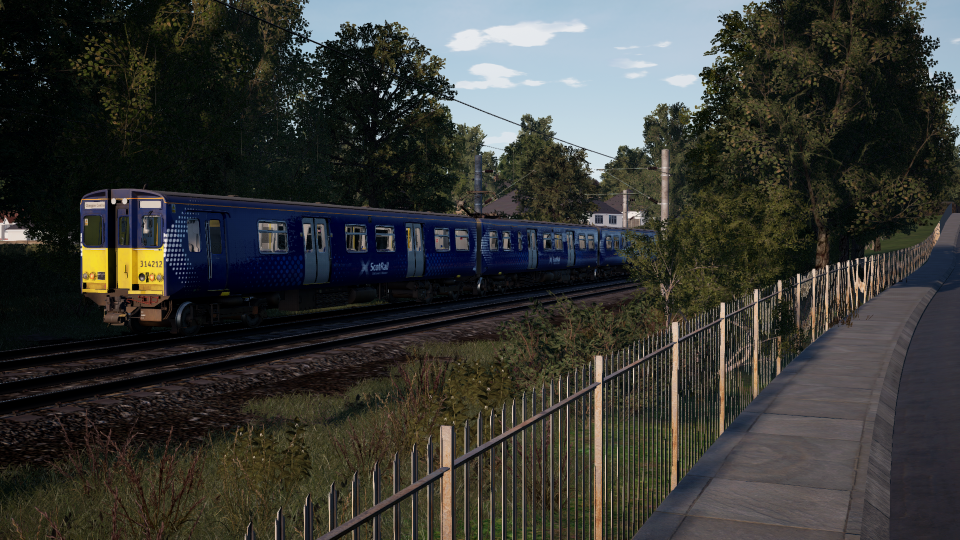 End
Hope this helps you out familiarising yourself with the route. So, in conclusion: trains. 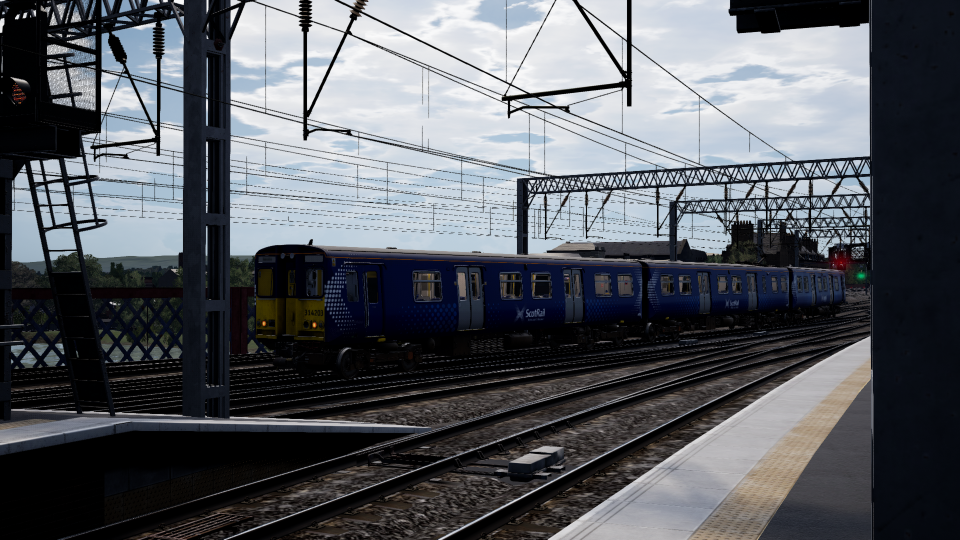 That’s all we are sharing today in Train Sim World 2 Cathcart Circle Line Driver’s Guide, if you have anything to add, please feel free to leave a comment below, you can also read the original article here,  all the credits goes to the original author [WW] CG