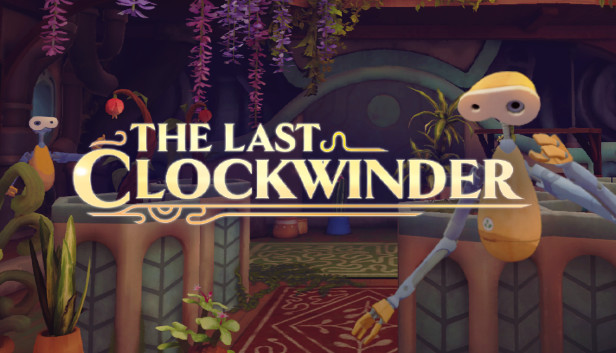 Thanks for checking this guide out! Here is a link to a full video on all of the achievements, as some of these are a little tricky to explain with just words and even screenshots.

These achievements are story related and unmissable if you complete a full playthrough of the game.

These achievements are given once you purchase an infinite seed bag of the 4 fruits for which one is available. These are easy to get, just might take time if you don’t have an efficient automation setup.

These are given for achieving the highest throughput goal of gems per minute with a maximum number of clones used.

For all of these achievements, there is a way to get this quite simply. Automate a simple string of clones that in not above the maximum allowed to produce some amount of gems without any input from yourself. Once that’s finished, you can grab gems 2 at a time (one in each hand) from the output and walk over to the input basket. Next to the input basket are the seed dispensers. You are able to set the gems down on top of those dispensers, creating a stockpile to dump in at once. 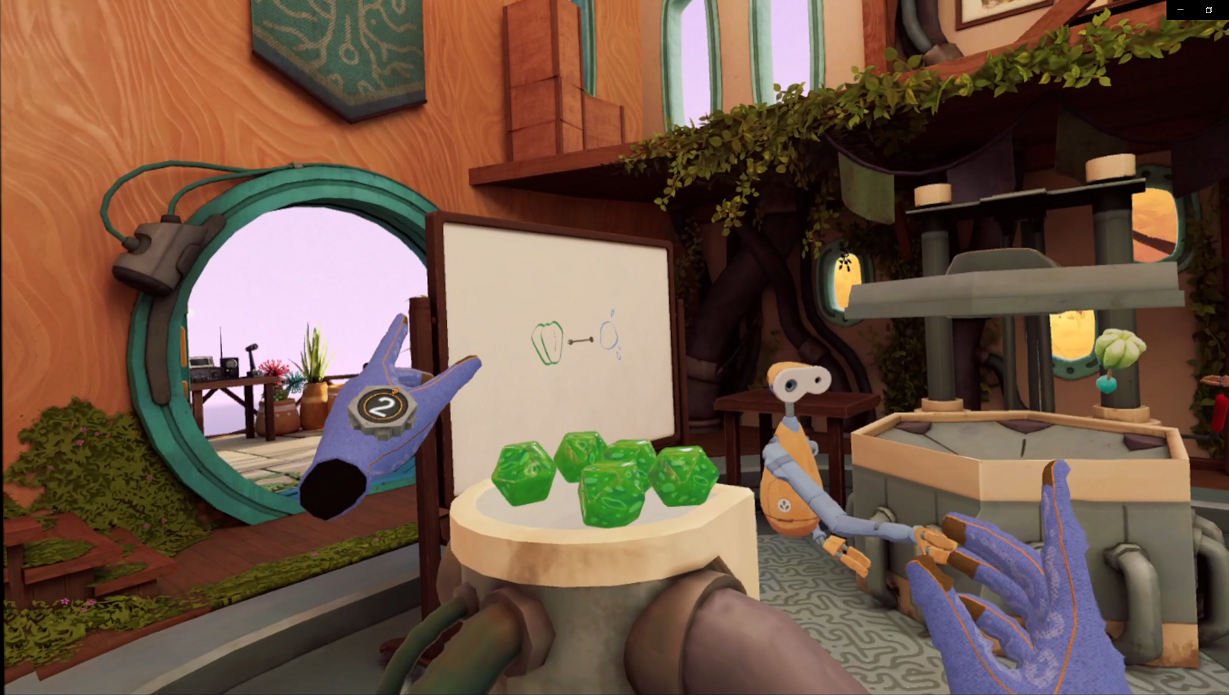 Get your automation running to its max productivity and then put in as many gems as possible immediately. You will spike your productivity number and hopefully get the achievement. If not, pile up more gems!

These 3 achievements can be obtained exactly like the seed challenges, as they also produce gems which can be stockpiled on top of the medicine dispensers.

Follow the same instructions as for the seed challenges to unlock these.

I will do my best to explain these here, but please refer to the video at the top if more help is needed.

For Blusher Garden Challenge, each clone can throw 1 fruit per interval if the timer is set to one. The clones should be throwing the fruits as fast as they grow. Make the clones throw directly into the input basket. Skip the nearest fruit growing pod and work your way back until you approach the goal (I think 5 or 6 clones?) When you are close, you can manually throw fruit from the nearest pod. Alternatively, if you have a hard time getting further clones to make their throws, you can play clean up near the basket to make sure the fruits get in

Then, have multiple clones standing by the basket catching the lobbed Bomb Berries and depositing them into the basket. 1 clone should be able to do 4, but you can do 3 yourself and have a clone do three.

This should be very easy. Have 2 Dewshot plants. At each, have one clone slingshot the dewshot toward a Lilypad in between itself and the big funnel. Put a clone at each “receiving” lilypad and with practice you should be able to get the Dewshot to bounce into the funnel.

This one can be a bit tricky. Have one clone grab a blusher and attach it to a stick. Then have it poke the first Dewshot that comes from the tube from the Lilypad room. Then have it lob that molecule toward the basket. Plant another Blusher and another Dewshot plant and have another clone do the same thing taking that Dewshot from the plant. Have another clone grab one of the blushers in between the cycles of the other clones, attach it to a stick, and like the first clone grab one of the Dewshots coming from the big tube and lob it toward the input basket. All molecules should be aimed well and be pretty close to the basket, but slightly above it.

Then make a clone at the basket holding the knife stand there and with slight movements cut the incoming molecules, allowing the Dewshots to fall in the basket.

If you need more throughput, manually grab a blusher and attach a stick to it. Then attach the other end to a Dewshot, then attached the Dewshot to another stick, to another Dewshot, etc. You should have a long molecule of 1 Blusher followed by about 4 Dewshots in a line. Then walk over to the knife clone and move the molecule against the knife, cutting off each Dewshot once at a time, allowing them to fall into the basket. (check video at top for visual aid)

Then go to the second clone and remake a clone. Start the recording as the knife comes flying, turn and cut all 4 Badgertails as done for the first pods, and then toss the knife back to the 1st clone. Timing is important on this one, so try to make smooth motions.

If those 2 clones are cycling well, you can set up 4 more clones, 1 at each of the 2 grouped together growing pods. As the fruits are cut, have each clone grab them and toss them into the input basket. For the further clones, you can have them throw the Badgertails close and manually catch them and throw them in.

This is the hardest one. The “main” collector at the top gets backed up I think once it gets more than 3 Luftapples per cycle. Start at the very back near the throughput board and gently have a clone knock 2 Luftapples from their stems into the collector above. This takes a lot of trial and error.

Honestly it’s really hard to explain in words so please just check out the video if you need help on this one. D:

These final three achievements are easy to get once you know how!

You can get this one right after the power comes on. Just throw any Room Key out of a window to fall into the ocean below. It will respawn where it originally spawned and you will get the achievement.

For this achievement you must spawn in as many clones as the game allows. I think it’s 25 no matter which room you’re in. It is definitely 25 in Blusher Gardens. Keep placing them down until a pop up comes up saying you can’t place anymore and you’ll have gotten the achievement.

This one is tricky. See the screenshot below for help. You must play the melody that Edea plays on the recording (the one sitting on top of the piano). If you follow the diagram below, you should get it no problem. Just pressed the keys in the order of the numbers. If that’s somehow confusing let me know and I’ll make a better diagram 😀 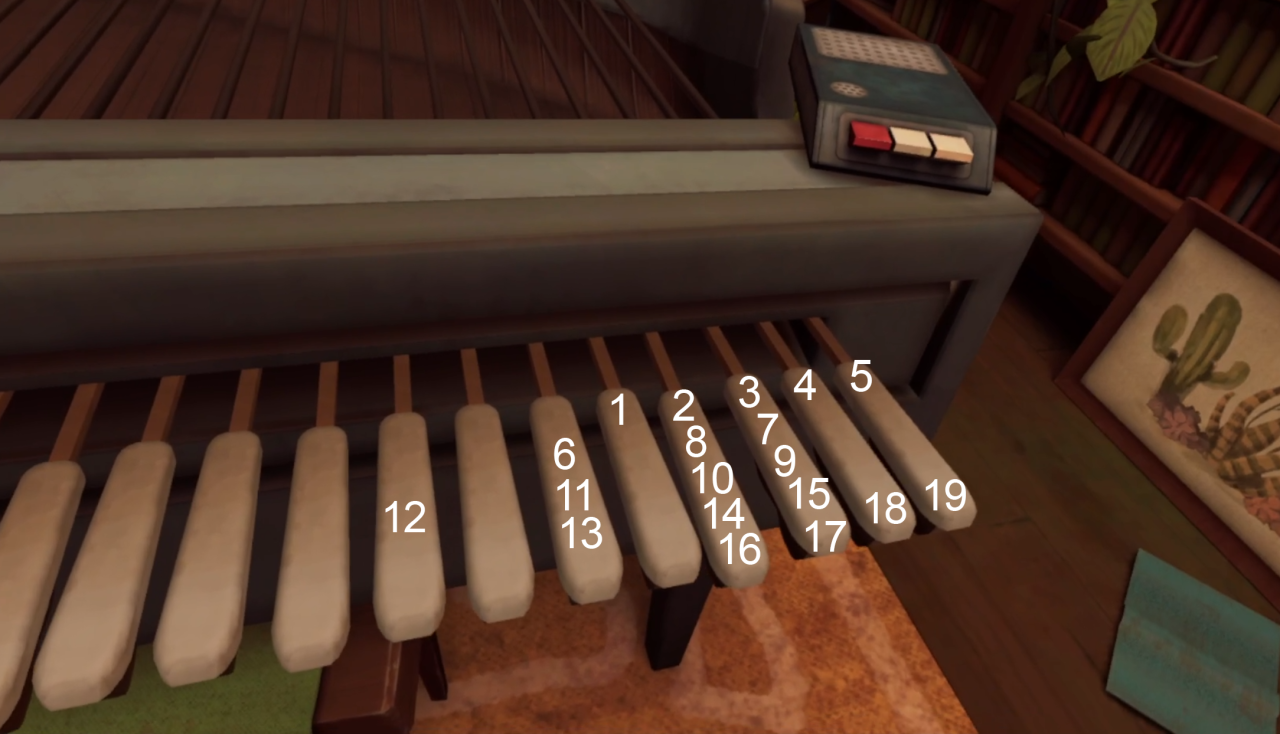 That’s all we are sharing today in The Last Clockwinder 100% Achievement Guide, if you have anything to add, please feel free to leave a comment below, you can also read the original article here, all the credits goes to the original author tornadre