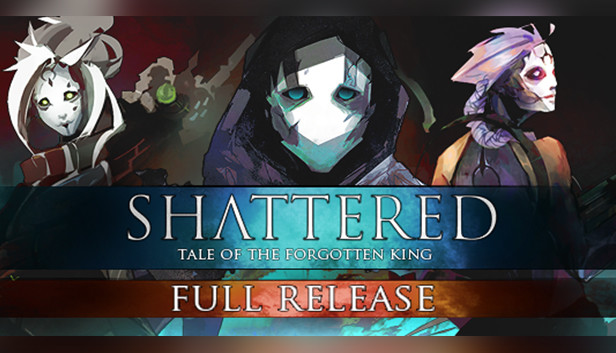 For Shattered – Tale of the Forgotten King players, this is a detailed guide listing all the different conditions required to get the game’s various endings.

Shattered has a total of six endings: Five of them can be accessed by completing the game and beating the final boss under certain conditions, while the sixth one is more of a meme ending and can be accessed at any time from Limbo. The three main factors that influence the ending that you get are the fates of the three Demiurges, the fates of the five Dark Wanderers, and your decisions related to the Cardinal Cores. The endings and their respective requirements are listed below in the order they appear in the game’s files.

Ending 1 – All Who Wander Are Lost

This ending is a little special, as it is the only one that features a unique gameplay section after the final boss, including a Limbo Well because there are some enemies to fight. You’ll get dropped in a maze-like environment and will have to find the exit at the end of a long hallway. Don’t worry, it shouldn’t take you more than five minutes to find the exit.

This ending doesn’t feature any gameplay, only a gruesome scene that will make you question the very nature of the world you just explored…

I’d be hesitant to call any ending the “true” or “good” ending, but this one features a unique NPC that is mentioned a couple of times throughout the game’s lore, has the most demanding ending conditions, and ends with the words “To be continued…”, so yeah, this is the one that feels the most like a satisfying ending.

Ending 4 – Loneliness of the Soul

After beating the final boss, you’ll find yourself in a dark place, with only a trail of small glowing pebbles to guide your way. Follow them all the way to the end and see what awaits you…

Probably the second best ending after ‘Beyond Slumber’, it offers a lot of extra lore to sink your teeth into. After defeating the final boss, you’ll wake up in a blinding white void. You’ll spot a structure in the distance, simply make your way towards it, ignoring the lost souls along the way. Once you reach the structure, interact with it and prepare to say “oh”.

Technically more of a joke than a real ending, but it has a unique achievement tied to it, so I’m mentioning it too for completion’s sake! This ending can be accessed at any point from Limbo’s Heart. From the central area, look for the opening in the wall behind the broken portal and traverse the broken bridge until you reach the platform with the glowing heart floating in the middle. Simply interact with it and remove it to trigger this ending.

You can (technically) only get one main ending per save file, as they are triggered when beating the final boss, and while you will be able to continue playing with your current save file after the ending, the final boss will be gone for good. This means that, if you want to get every ending (and thus their related achievements), you’ll have to complete the full game five times.

There is a way to save yourself some time, however, by making a copy of your save file before you take any action that would affect the ending (taking or destroying a cardinal core, killing the fifth and final Dark Wanderer, or killing either Andras or Ras’Samrah). In fact, you could set up a perfect save file by beating all four watchers but not interacting with their cores, completing both Niphur and Kothar without interacting with their Demiurges, and only beating the mandatory Dark Wanderer fights while ignoring the optional ones.

That way, you’ll be able to start from that point again without having to go through all of the early game areas anymore, upgrading your character, weapons and so on. All you’ll have to do after achieving one of the endings will be to overwrite your completed save file with the one you backed up before making any permanent decisions.

In order to access your save file, you’ll want to follow AkaKwak’s wonderful little guide on the subject.

Huge thanks to MiaouBanane for their help and feedback regarding the endings conditions.

That’s all we are sharing today in Shattered – Tale of the Forgotten King All Endings Guide, if you have anything to add, please feel free to leave a comment below, and we’ll see you soon.
Credit to Omega Ridley