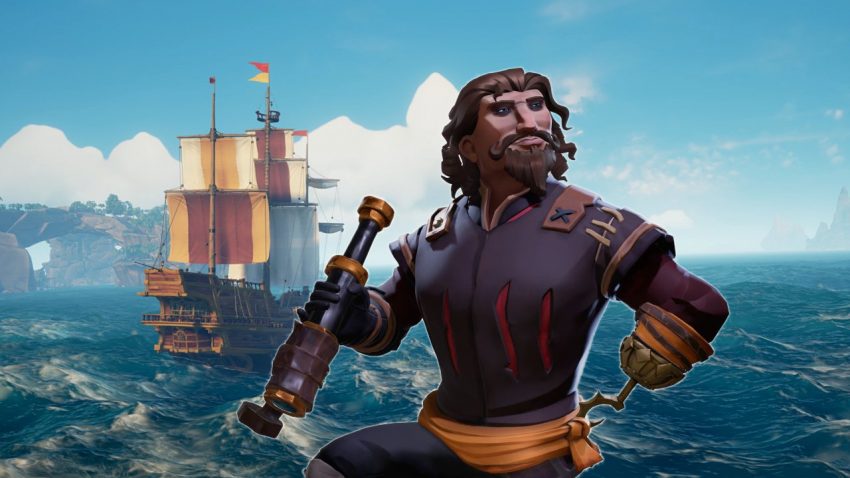 Sick of getting suprised? Tired of running for so long you need to log off? Read this guide for helpful tips to avoid and escape from PvP encounters solo.

The best way to escape from PvP encounters is to never enter one in the first place.

Every now and then, along with every time you dock or plan to spend a long time in one place, scan the horizon for ships. Even without the telescope you can see ships from very far away. If the seas are rough you might need to climb up into the crows nest to get a good view. If you see a ship, be wary. If it seems to be heading in your direction (the easiest way to tell this is by looking to see if the mast is visible. If it is, the ship is heading away from you. If it isn’t, the ship is heading towards you), be wary. Depending on what you’re doing you may want to wait anywhere up to a minute to see what the ship appears to be moving towards.

You can differentiate a skeleton ship from a normal ship by the unique green and blue lanterns and tattered sails.

Every now and then, along with every time you plan to spend a long time in one place, check the map. You might see shadows of ships moving on the map. These are people flying the emissary flag of the Reaper’s Bones, which is effectively the PvP faction. In my experiences, these are the people most likely to chase you across the map and kill you repeatedly without question. They are also the most likely to be coordinated groups of veteran players. If there are any nearby, or if any seem to be heading in your direction, immediately pick up shop and leave the area. If any reaper emissary has a tier 5 flag (determined by the number of red lines above the ship) they can see everyone flying any emissary flag. If there is a tier 5 reaper on the server it might be a good idea to lower your emissary flag (if you’re flying one) until they log off.

Turn Off Your Lamps

There are 3 lamps on the upper deck of the sloop and 2 in the cabin. Turn all of these off (there are 2 in the hold, but you don’t have to worry about those). This means that you don’t glow at night, making you significantly harder to spot in the dark and during storms. The amount of visibility you lose is minimal above decks, and it’s fine to turn on one of the cabin lights to see the map better as long as you turn it off again afterward.

In summary; Always be ready to run.

Point Away From Islands

The last thing you want to have to do is turn completely around on the spot while under fire. You’re a sitting duck while you’re not moving, so the goal is to minimize the amount of time it takes to get from parked to top speed. make sure your ship is pointed either directly away from the island or in a way that allows it to turn away at full sail without hitting it.

Sails and Anchor Up, Not Down.

It takes more time to raise the anchor than it does to lower the sail. Keep the sails up and anchor up so you can get moving in a second rather than in 10. If drifting bothers you, you can lower the anchor to stop the ship, then immediately raise it again. If the sails are all the way up the ship won’t move at all, though it will spin around in a heavy storm.

Don’t park in coves, ports, or anywhere that limits your escape routes more than necessary. The cove in thieves’ cove is a great example of what not to do; you have only one escape route that can easily be blocked by an opposing ship.

When prevention fails and it’s time to get lost.
Remeber these tips may only apply to sloops
Sail against the wind

Keep your sail as turned into the wind as possible, even if it means turning the sail completely sideways. If you’re sailing against the wind you want the ship to be facing directly into the wind and the sail pointing forward, but in every other case you need to turn the sail to catch the wind as much as possible. If it’s a race between two sloops, sail optimization means the difference between getting caught and getting away.

Make sharp turns, get close to islands, sail towards storms and world events (the giant weird clouds). If your opponent bumps an island it will slow them down and maybe even knock them off course. Storms can make maneuvering difficult, but remember all you need to do is keep sailing. It’s the chaser who needs to worry about staying on course. World events can distract and disrupt opponents, usually by causing them to come under fire from other sources.

Only Repair When You’re in the Clear

You can outbail 3 large holes in your ship and still have time to fix them or maneuver. Just because you get a hole doesn’t mean you should drop everything to fix it. Focus on getting away from whatever caused the damage, then fix the hole when you don’t have anything else to do. Remember to bail though.

When nothing above works, you’re still being chased, and you need to take desperate measures.

In the settings under “my crew”, extreme bottom left corner. Everyone on the crew needs to vote to scuttle the ship, but if you’re solo, that’s only you! Scuttling instantly sinks your ship, but if you’re being incessantly chased and either don’t think your loot is worth the trouble or don’t even have any loot then scuttling might be the best option to just get away. There is no penalty for sinking if you have no cargo (but you will lose any excess supplies like cursed cannonballs)!
Alternatively, you may also choose to just log off and join again if you’d rather be in a different server or immediately back at an outpost so you can take another quest. Remember that if you log off all active voyages will be lost.

Get into cannon range and use a cursed cannonball. Riggingballs can slow down your opponent, Helmballs can be decent if used properly (when the enemy is turning sharply), Peaceballs aren’t very helpful, but Anchorballs are by far the best at stopping pursuits. When used while the enemy is turning, you can even force them to do a handbrake turn, potentially reversing their direction completely and causing them to lose a lot of ground.

The green cursed cannonballs are a little less effective at stopping pursuits, but if things are already going wrong for your opponent they become much more useful. Grogballs and Limpballs slow down your opponents and disrupt bailing while Wearyballs and Jigballs effectively lock your opponents in place for a few seconds. All you need to do is hit the ship with the ball and everyone on board will be effected.

Try and Sneak Aboard

When you are moving straight and there doesn’t seem to be anything ahead of you for a while, drop off the back of your boat and try and climb aboard the opposing ship. The primary goal is to drop the anchor, but doing other things like messing with the wheel and sails aren’t a bad idea if the opponent doesn’t realize you’ve climbed aboard. If you die, it doesn’t even matter since you should have left enough time to respawn.

Play the patience game. Just keep going and going until they decide you’re not worth the effort. Every second of your time they waste chasing you is a second of their time you waste running.

That’s all we are sharing today in Sea of Thieves Solo Slooper’s Guide to Avoiding PvP, if you have anything to add, please feel free to leave a comment below, and we’ll see you soon.