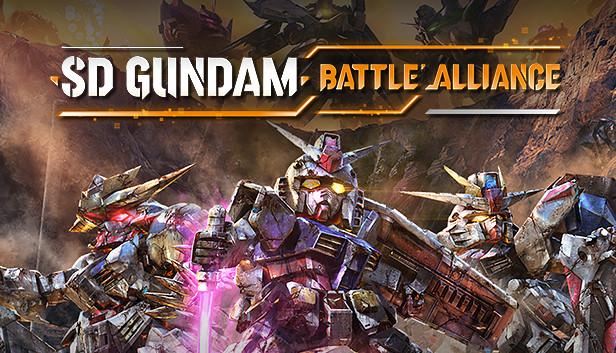 For SD GUNDAM BATTLE ALLIANCE players, this guide is a place where you can find the level 1 and level 80 stats of a suit, the particularities of their move-set and how to calculate how much damage they will deal with attacks, along with some tips or tricks on how to use them more effectively.

The Foreword (Followed by math)

Hey, wanted to thank you for looking at this- And if you see I screwed up or have tips or tricks for a mobile suit I didn’t use enough to figure out, feel free to drop them.

To get started, let me first introduce you to how Damage seems to work in SDGBA;
Your machine has a Melee and Ranged stat, and each attack has a value it is multiplied by when attacking. You subtract the armor value of your enemies, and viola! Damage!

But it’s more complex than that, though it is arguably pretty simple in scope, and that’s fine by me. In essence, each 100 in a stat is a 1x multiplier to the damage of an attack. If you have 355 Melee, you take the value for the melee attack (Lets say 46) and multiply it by 3.55. You should hit for 163 or 164, depending on the games rounding and a bit less after defense, which is percentage based.

Now, the fun part. Know those “[Subweapon] Attack” parts? What about “[Beam] Melee Attack”? The game multiplies these together to get your new total, so stacking them if you can is stronger than it looks. Lets say you have to choose between a part that gives 100 Melee, or 15% bonus damage to your attacks. You have 500 Melee. On a base 46 power attack, you will do 230, or 276 with the extra 100. But that 230 becomes 264.5 with the percentage part. It doesn’t seem worth it, until you factor in these can generate on your Melee/Ranged parts. Say you got both the 100 and 15%- You hit for 317.4. While basic attacks might fade off at this point, Subweapon attacks do not.

Subweapon Attack and your chosen type attack percentage part can stack- A Hyper Bazooka shell that normally does base 90 with 500 ranged would deal 450. You have a 15% and a 20% bonus from parts to it from two separate effects- it now deals 621. Doesn’t seem like much more of an improvement, despite being a 38% effect over a 35% one… But wait, there’s more!

A Back Attack adds 30%, and an Aerial adds 20%. Aerial Back Attacks add 50%, and Backstabber adds an additional 20%. Stack that on top of it, which is multiplied against your full total from the previous multiplication. 1958 damage or so. Physical attacks do a little bit less total damage to compensate for no strong I-Field or armor effects that neutralize them completely, I think. Don’t judge Physical Damage Dealing MS harshly for it.

But enough about that, on to the mobile suits and their kits.

If your mobile suit isn’t on here, that’s because this is a work in progress and it takes time to do these. I’ll get to it!

Special Notes:
Both Sub Weapons raise shield for guarding during their animations.
SPA has some splash radius.

Special Notes:
Machine Gun allows farming SPA’s quickly, which does a rather high amount of damage.
SPA has splash damage on final shot.

Special Notes:
Main Ranged greatly speeds up SPA recharge rate, but SPA is rather weak.
SPA has large splash radius.
Counter Attack has a high chance to Back Attack.

Special Notes:
SPA has decent splash radius, and is easily aimed at alternate targets during animation.
Spin attack starts small and is rather slow to expand, if stylish.

Special Notes:
Heavy Attack can function as a dodge.
SPA Has some splash radius.

Special Notes:
Has +1 Repair Kit Stock innately.
SPA tracks target locked enemies and chooses a new target afterwards.
SPA lands approximately half its attacks as Back Attacks.
Heavy Melee has a grab like animation and a very long lag time, but can be jump canceled out of at the beginning of the second swing.

Special Notes:
6-Tube Missile Launcher is a lock on type weapon, and can hit up to 6 different targets.
SPA creates a large explosion in front of the unit.
180mm Cannon has considerable splash radius.

Special Notes:
180mm Cannon has considerable splash radius.
SPA is technically a grab attack. If a Boss is not staggered by the activation or broken they can escape it.

Special Notes:
Unless cancelled after the second attack via dashing, the Heavy Attack will leave you vulnerable unless prepared.
3rd attack on Heavy Attack can hit multiple targets and knocks down.

Special Notes:
The Down Smash is a ranged attack, and should replace your attacks if you do not use melee parts.
The SPA laser pierces enemies.

Special Notes:
Shotgun has a 3 round fire sequence- To maximize SPA gains, melee to continue combo before firing again.
Features a Ranged Counter.

Special Notes:
Has +1 Repair Stock inately.
Melee attacks are rather slow to come out.
Both Subweapons can be used to glide left or right when firing to dodge attacks.
Giant Bazooka can be cancelled into Beam Bazooka.

Special Notes:
Large Beam Cannon has considerable splash radius.
6-Tube Missile Pod is a lock on weapon, and can target more than one unit at a time.
SPA will benefit more from Physical Ranged boosts than Beam Ranged Boosts.

Special Notes:
Arm Grenade Launcher can be cancelled into Heavy Melee and vice versa to speed up attacks.
SPA often feels like it misses when it hits due to impressive speed.
Hyper Mega Launcher has considerable splash.

Special Notes:
Beam Rifle (2-Shot) is incredibly hard to land, but both attacks landing do considerably more damage than most other machines sub weapons. The second attack tries for a Back Attack if close enough.
SPA Stuns all nearby enemies and knocks them over, and lasts approximately 65 seconds.
Capable of filling the SPA bar before Awakened runs out.

Special Notes:
High Mega Cannon pierces enemies and creates a large splash zone on the first target. If first target is killed, the splash zone is moved to the next target.
21-Tube Missile Launcher locks on, and can target multiple enemies.
Heavy Attack drops you from the air.

Special Notes:
Funnels (Launch) will result in about half back attacks.
The SPA is a melee type that varies in damage based on how many funnels land back attacks.
Counter Attack can hit multiple units and chases the target during the animation.

Special Notes:
Fin Funnels land half their attacks as Back Attacks on average.
Standard melee string is rather fast.
Up Smash starts an Aerial Chain.
SPA is Physical Melee followed by Beam Ranged.
Counter fires with splash damage on second attack.

Special Notes:
Fin Funnels vary in number of shots fired depending on how long they take to get into position. Average of 12-15 shots that hit.
Spin attack’s second hit is as wide as the first despite looks.
SPA Pierces through the target.

Special Notes:
Heavy Attack also functions as a dodge.
Hyper Bazooka has longer end lag than other Bazooka, but you can cancel into Heavy Attack.
Beam Gatling Gun cancels into Up Smash, and it is highly recommended you do this to avoid its atrocious end lag.

Special Notes:
Armed Armor BS (Irradiate) pierces enemies and has very strong stagger, holding enemies in place.
As with all grabs, if the target is not a grunt or broken, the second part will not activate.
Main Ranged has very limited shots for no good reason.

Special Notes:
Heavy Attack when close enough usually phases you behind the target.
Beam Naginata (Charge) will carry off directly hit targets if they are broken or grunts.
SPA is oddly powerful for an Infighter, but has no tracking and very log range.

Special Notes:
Both Subweapons can cancel into one another.
Charges its own SPA incredibly fast. With Energy Gain and Minds Eye can maintain 100% Awakened uptime as long as enemies are present.
Awakened form increases HP and becomes an Infighter.
Psycho Field brings targets to you.

Special Notes:
Is affectionately known as the “Angry Bell Pepper”.
All Funnels attempt to back attack the target.
Mega Particle Cannon pierces enemies.
SPA causes much more damage the closer you are to the attacked target.

Special Notes:
MEPE Mode sometimes causes attacks to miss you without a perfect dodge/dash.
Twin VSBR is one of the hardest, if not hardest hitting weapons in the game that reloads.
The Beam Launcher can be cancelled into a Heavy Attack.

That’s all we are sharing today in SD GUNDAM BATTLE ALLIANCE Mobile Suit Stats and Action Damage, if you have anything to add, please feel free to leave a comment below, you can also read the original article here, all the credits goes to the original author Sill