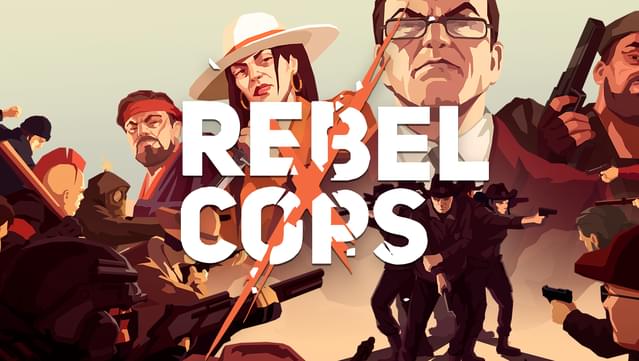 Welcome to SteamAH. Rebel Cops is a spin-off game from This Is the Police, which exclusively focuses on the series’ turned-based tactical operations. Here is a guide on how to enact vigilante justice.

Officers gain experience for performing actions including but not limited to: stunning a suspect, forcing a suspect to surrender, killing a suspect or arresting a suspect. Each level requires 1000 experience points and each officer can get 9 upgrades in total (10 levels but officers start at level 1).

Each level up allows them to pick a perk and upgrade an attribute. There are 9 perks in game:

1. Robin Hood: Allows the officer to spend 2 action points to fire more accurately. Decently helpful if you plan on going loud, considering if a shot connects, it will definitely either disable or kill an enemy.

2. Capturer: Allows the officer to arrest suspects remotely. Very useful to have for both stealth and combat scenarios (you have to get close to the suspect first though).

3. Hawk-eye: Allows you to see further. Okay skill to have since it is a very passive skill.

4. Chameleon: Reduces the chance of getting hit. Very useful for combat scenarios.

5. Fiery Revenge: Allows the officer to return fire once per round after being shot at by criminals, whether they hit you or not. Useful for combat scenarios.

6. Lucky Shot: Allows you to shoot again if you missed, not very helpful in my opinion but might be helpful in early firefights where your officers still have to rely on inaccurate revolvers.

7. Patience: Allows you to reserve 1 action point to the next round if you have one left

8. Smooth Ops: Increases possibility to make criminals surrender. Not very useful in my opinion since it doesn’t make that much of a difference. In combat, the odds of getting criminals to surrender is already fairly low and during stealth, the chances of getting a surrender will be very high once you get about 3 spaces close to the enemy.

9. Black Knight: Allows the officer to keep fighting after getting a disable shot (so if he gets a headshot, there is no coming back). Useful for combat scenarios.

After completing a mission, officers who participated in the mission will get fatigued and has to rest for a mission in order to get full performance. So make sure you try to level the officers equally.

Finally, an exploit for getting level ups for officers: In missions without a time limit, once you get most of the enemies out of the way, leave a few out there. Either equip all your officers with the club or have them pair up with other officers. Go to the enemy in question, make them surrender, repeatedly, you get 30 XP for each successful surrender. Each surrender will last 2 rounds, during these two rounds, make them surrender, again and again and again. If the surrender ran out of time somehow or you got an unlucky streak of not surrendering, hit them with the bat so they get stunned. Once they recover, repeat the cycle. Once you are tired, just cuff them and finish the mission.

Revolver: If you want a gun that can shoot, take the revolver. It is the cheapest gun you can get. No attachments are available for the revolver and when you buy ammo, you get 6 round per reloader.
Pistol: The better sidearm. More expensive than the revolver but you can add a silencer to it that will allow you to do stealth shootings. Each magazine holds 9 rounds.
Shotgun: The first long arm you get access to. Short range. No attachments available. Each shell comes by itself unlike the magazines and speed reloaders of the sidearms.
Rifle: The second long arm you get access to. Long range. You can add a scope to it to make it more accurate. Each cartridge comes by itself just like the shotgun.

Silencers: Silencers allows you 7 quiet pistol shots per mission that doesn’t instantly alert all the enemies to your presence.
Scopes: Scopes make rifle shots more accurate.
Tasers: Stuns suspects for 4 rounds but takes 8 rounds to recharge. It is only accurate in short ranges. Stunned enemies can then be 100% arrested.
Flashbang: AOE stun for 2 rounds if you can’t get an entire room to surrender in one round. Stunned enemies can then be 100% arrested.
Baton: Melee stun weapon, stun lasts for 2 rounds. Stunned enemies can then be 100% arrested.
Knife: Melee kill weapon, it is stealthy too. Unlike arresting, killing leaves a body which will raise the alarm if spotted. There is no way to get rid of the bodies (I think, didn’t see a move body option).
Medkits: Heals officers if they are shot and a certain side mission objective requires a medkit.
Lockpick: Opens a locked door/window stealthily. It will break upon use.
Ammunition: Without appropriate ammunition, guns are useless.

Most missions have their side objectives, either to:
1. retrieve an item
2. move an item/person to the extraction zone
3. rescue a hostage

Doing these missions will net you street cred and/or money and/or gears. These side objectives will also allow your officers to come in at a different angle than your main force, though you don’t have to use it if you aren’t feeling confident, since it will split your team up. Also, you have to complete these side objectives before you complete your main objective. The moment the last main objective is completed, the mission will be considered over.

Generally, missions are easier when you attempt them in stealth, however some missions start out loud.

During missions, you can earn rebel points by arresting suspects. You get 4 rebel points for each arrest. Rebel points can be used to get command center bonus for the team. There are 6 command center bonus:
1. Overwatch: Does pretty much what it describes, officers in range takes a shot at the first criminal in range.
2. Steady hand: Increases accuracy for 1 round.
3. Shadow: Makes your officers invisible for 1 round (very helpful for stealth missions).
4. Rebel Spirit: Gives your officers extra action points. There doesn’t appear to be an upper limit so you can give them as many action points as your rebel points allow.
5. Pinpoint: Gives you an outline for all the remaining enemies in the mission.
6. Shock and Awe: Arrests all enemies in visual range (so enemies you haven’t seen or ones that are currently red outlines won’t be arrested).

Look for valuables during missions. Take special notice when you move your officers and you hear them say something along the lines of “found something”, it means they have something valuable nearby. There are safes in game that requires you to use codes to enter, you have to rummage through the mission to find their corresponding password. If you found something confusing, it is somewhere else (hint: third mission). Valuables can then be sold after missions, you can choose how much of the sale goes to the civilian population. You can choose 85% to civilian, 50% to civilian or none for civilians. The percentage will affect your street cred. Personal advice would be to keep all the money for yourself on the rich missions and give money out for poor missions since civilians obviously don’t care about the amount of money given to them, only the percentage.