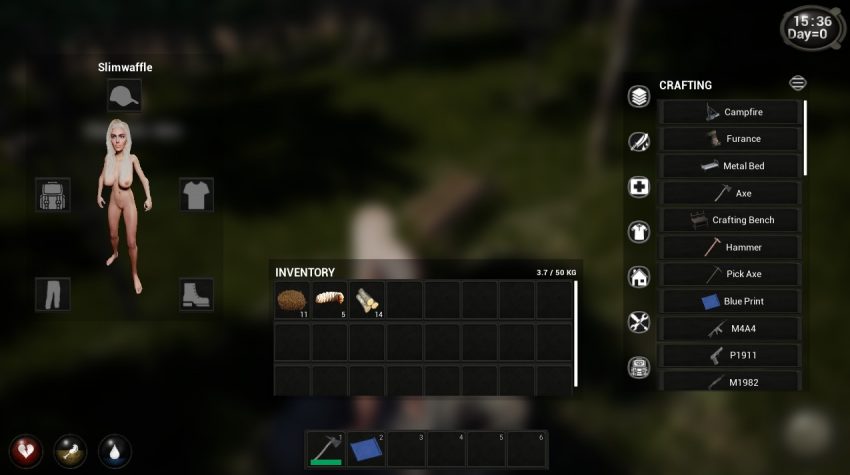 Welcome to SteamAH. here is a guide on how to get start in Outback Survival game.

after spawning in you gonna run to an open spaces near water. get wood and stone by the time you’ve gotten this it should be nearing dusk. next build a wall of spikes as wide across as you can then wait it out. the next day you need to get water and a furnace going. ( if possible get a chest for all the stone you’ll need) after the stone and needed wood is obtained start smelting the stone in to metal and keep about 20 stone out of the furnace.

after surviving the first day and a half (because the spawn day starts at noon) now is time to get guns. after about 2 days of testing i can say with out a doubt the shot gun is the best flat-out. this gun will carry you through the whole play through. though zombies don’t drop loot there will be no option but to kill the ♥♥♥♥♥ so you’ll use about 2-3 shells per zombie at close range and 4-5 at mid. knowing this it can be easy to survive for 100’s of days on end. place a plot buy useing the blueprint item and going to the more options section on the wheel.

at this point you’ve got the bare bones of gameplay figured out now is for the real ♥♥♥♥.

towns/ and building a base
the bastard had the balls to go to a town huh well have fun getting slapped around by the un-dead. towns are crawling with the dead and will have loot laying around for the taking. knowing that you might think towns would be a good place to shack up ” just clear it out and use it as a base”. well you could if it wasn’t for zombies spawning there and you get trapped in a house for 3 in game days slowly dying of dehydration and hunger. so not a good idea to shack up over night.

towns are a good place to swing by but don’t linger you will get stuck and die. WARNING Don’t build your base near a town. as of the last update zombie destroy buildings to get to players, knowing this its possible to set up traps for zombies but it can be tricky. the spike have weird placing mechanics and don’t work the same way buildings do. the cant rotate while being placed and can be placed on a corpes. if you have any luck learning about how these work post a link on the official discord and help us learn the weird behavior of them.

bases should be built with air locks all over the place. and upgrade foundations first then walls as the un-dead like attacking these first unless the wall is facing an upward incline then they hit the wall. air locks should be placed at all entrances and if possible the base should be surounded by spikes. also making a “safe room” in the 2nd floor is a good idea in the middle of the base.

this is about the random stuff that i thought of towards the end. being a helping hand with the dev and also being on the discord gives us a small peak as to whats next i wont say alot but i heard that the spikes will recive a nerf and will take damage from use i don’t know how much damage they will take per zombie but we can be sure its gonna suck when one brakes at night.

food ranking is
.meat
.grubs
.apples
.tin of beans
apples are very rare but give 30 hunger back, grubs do 10 hunger and are found by beating trees, meat is obtained by killing animals, and beans are a special item that only comes from towns both meat and beans give full hunger.

next to air water is the most important thing you’ll need water is obtained by cooking water from rivers and ponds in a fire found in the crafting menu. after a bit you’ll have a key dedicated to water on the hot bar.