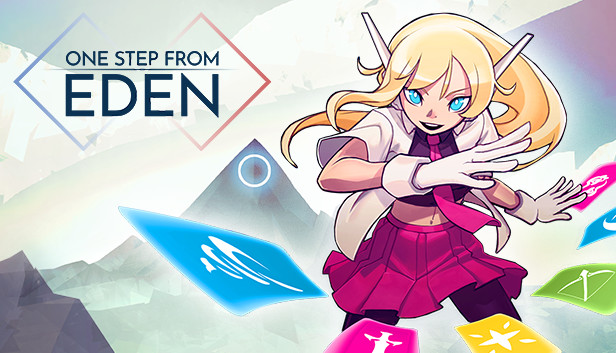 For new players of One Step From Eden, this guide will provide you some useful tips about everything you need to know about the game.

Notes from this guide

I did it quickly, use google translate, there will be possible spelling errors, sorry
Comment if I’m wrong in any information or missing any useful advice

How to create your own deck

In the main menu of the game go to Library
Top left you can toggle between Spells and Artifacts
If you click a second time on a ‘Sort’ category it will change the letters to blue sorting by the end
Look for the cards that you like the most and write them down in a text file or physical paperKnowing that common cards (white) are very easy to get, rare cards (blue) too, but epic cards (purple) are difficult and many times you don’t get what you want
legendary (gold) and calamity (rainbow) are not always available in conventional games (they are not loops)Instead of using the Game Library I would recommend:
https://onestepfromeden.fandom.com/wiki/Spells
Where it is easier to search in the browser for example “4 tiles” and find all the cards that attack 4 tiles

All the information is on this page, it is not made by me

The wiki is not very clear about endings (for me at least)… I had a hard time knowing how to access the ‘Yami’ to get Saffron’s Solo kit, and how to fight the Gate, I will clarify:

Battle = “Occasionally appear at the start of battle” = Like 10% or 20% of chance, based on my own experience, it is very dependent on the RNG

Spare not worth it, except if you want the easiest ending by making spares at all, for Neutral ending just spare Reva for being the best spare, Violette is recommended in case you are playing as Reva and cannot face her

That’s all we are sharing today in One Step From Eden Useful Tips For Beginners, if you have anything to add, please feel free to leave a comment below, you can also read the original article here, all the credits goes to the original author Goti Sánchez [ESP]