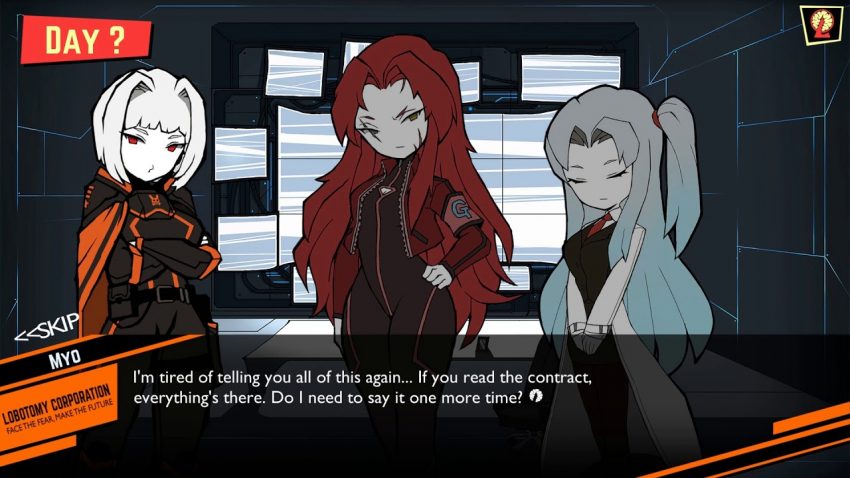 E.G.O. Gifts are obtained off of working on Abnormalities. There is a random chance upon work completion that the agent who worked on the Abnormality receives the E.G.O. Gift, and each E.G.O. Gift has a certain “slot” that it goes into. There are 14 different slots: Head 1, Head 2, Eye, Face, Mouth 1, Mouth 2, Cheek, Brooch 1, Brooch 2, Left Back, Right Back, Hand 1, Hand 2 and Special.

Whenever a new E.G.O. Gift of the same slot of a previous E.G.O. Gift is obtained by an agent, the original one is replaced by the new one. However, employees level IV and above have the option to “lock in” E.G.O. Gifts on the deployment screen. Locked in E.G.O. Gifts will not be replaced and are permanent until they are unlocked. The purpose of this guide is to give a (relatively) easy way to compare different E.G.O. Gifts and whether or not they should be locked in to your employees.

Penitence (One Sin and Hundreds of Good Deeds)

In the Name of Love and Hate (The Queen of Hatred)

Horn (Beauty and the Beast)

HP +9, SP -3
Special Drop: Rescued from Little Red while in the Wolf’s stomach.

Overview of Head 1
This slot has a lot of E.G.O. Gifts, with most of them being low to medium usefulness. Lock in whatever one you find to be most useful, and try to replace Courage for most employees unless you have them as a sole-attacker.

Movement Speed +5, Attack Speed +5
When wearing the E.G.O. Set of the same Abnormality, its damage output is increased by 15%.

HP +5, SP +10, Success Rate -5, Work Speed -5
When both the E.G.O GIFT and E.G.O. Suit from Melting Love are equipped, a Red shield will be formed when more than 10 damage is taken while HP is under 20, but Movement Speed is reduced by 50% when the shield is active.

Overview of Head 2
This slot has the two Backer Aleph E.G.O. Gifts, and both of them give a good bonus to using their respective set of E.G.O Gear. Even if not using either of their E.G.O. Gear, Adoration and Pinks provide a helpful bonus, and if neither of those two, Crier or Discord is the best for Head 2, giving good stat increases while providing a useful passive buff.

The Smile (The Mountain of Smiling Bodies)

Sound of a Star (Blue Star)

Overview of Eye
This slot has all of the main Aleph’s (Not White Night/Apocalypse bird or a Backer Abnormality) E.G.O. Gift except for Nothing There’s E.G.O. Gift, so lock in whichever one of the Aleph Gifts you find is the most useful for that particular employee, and absolutely lock in Da Capo for employees who are wearing the Da Capo E.G.O. Suit.

Overview of Face
…There’s only one possible E.G.O. Gift.

Overview of Mouth 1
Lock in Crimson Scar, as it is better in most cases than Regret.

HP +4
When equipped with the same E.G.O. Weapon, decreases the Success Rate and Work Speed by -4 and increases the Attack Speed by +10.

Soda (Opened Can of Wellcheers)

A Sword Sharpened by Tears (Knight of Despair)

Overview of Cheek
All four of these options are strong and viable choices to lock in.

Somewhere Spear (Fragment of the Universe)

Overview of Brooch 1
All of these E.G.O. Gifts are pretty simple and give small buffs, and it is important to note that Noise’s additional effect will help little to none as the Noise E.G.O. Suit is Teth class.

SP +6
When E.G.O. Weapon of the same Abnormality is equipped, its Attack Power increases by 5.

Galaxy (The Child of the Galaxy)

Success Rate +3, Work Speed +3
Heals a small amount of both HP and SP of the employee

Overview of Left Back
There is only one E.G.O. Gift for this slot, so don’t bother locking it in. It won’t hurt if you do, but it won’t help either.

Overview of Right Back
Out of the two E.G.O. Gifts in this slot, one is a straight up upgrade, so always lock in Through Dark Twilight, especially for employees who work on Funeral of the Dead Butterflies often.

Overview of Hand 1
These are both Waw class E.G.O. Gifts that have pretty similar effects. Either one works well.

Overview of Hand 2
These are all minor buffs, but Spore or Shed Skin are the best to keep.

Overview of Special
You don’t want this E.G.O. Gift in most cases, as it means death for the employees equipped with it. However, there is no other E.G.O. Gifts for this slot, so once an employee has it, they are stuck with its strong buffs and their impending doom.