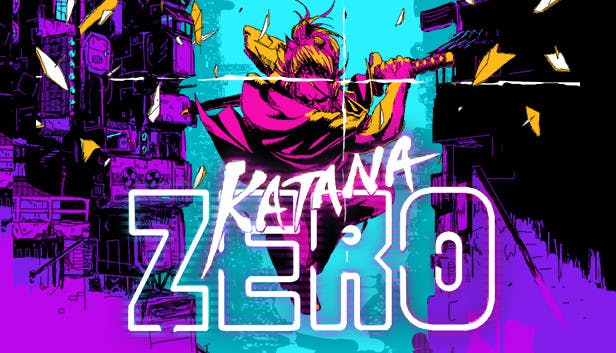 You want to beat the hardest boss in the game? Here’s how you’re gonna do it

Some of you might be unaware of the Psychiatrist being the secret final boss of KatanaZero so I’m going to explain how to proc (activate) him as your final mega opponent and explain his three stages of combat.

You have to do the following:

1. At the very start of the game, when he calls you to explain your mission, continue to hang up on him until you unlock the achievement “Don’t Hang Up!”. He will go silent and you’ll have the option to let him talk.

3. Talk to DJ Electrohead about Chronos, therefore going against your doctors orders, and let him be shot by V.

4. At your next appointment continue talking about Chronos with your doctor then refuse treatment. Say no whenever he tells you to take the drug and leave.

5. Kill everybody in the prison escape mission: this is because he specifically asks you to reduce collateral.

6. Tell the psychiatrist “F*ck you” during your appointment before the Chinatown mission.

7. Pick every red option when you can.

8. Finally, confront the doctor about your dreams. Basically when he’s going through things at his desks and smashes his phone spam spacebar like your life depends on it. You will go to punch him; he will catch your punch.

Congratulations! You’ve just proc’d the secret boss! Time for the hardest thing you will ever have to do in this game! This will test your mental, reaction and rolling mechanics! You will die a lot so be mentally prepared, loosen those shoulders and strap yourself in!

So your doctor just shoved you to the ground, injected himself with two vials of god-knows what and is not floating in the air. This is what you asked for so time to get down to it. Here come the massive arms! 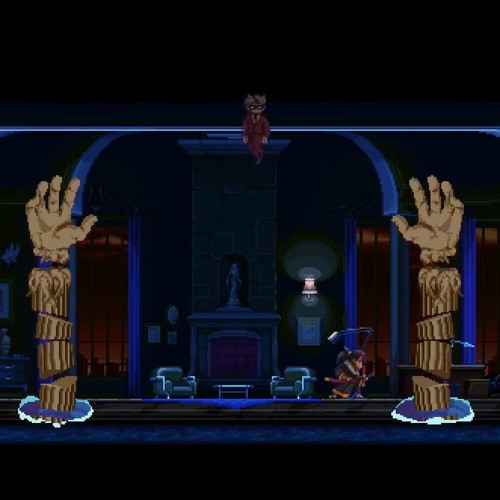 Don’t be frightened by the massive demonic arm things flying at you they’re actually quite easy to handle! As they’re flying at you just hit them and you’ll deal damage to the doctor; make sure not to get grabbed though otherwise he’ll snap you like a pencil and that is, pretty much, the last thing you want at the moment. . If you do happen to get caught spam left and right, just like the kissyface boss fight, and you will be able to get out of his grip but you can only do this ONCE 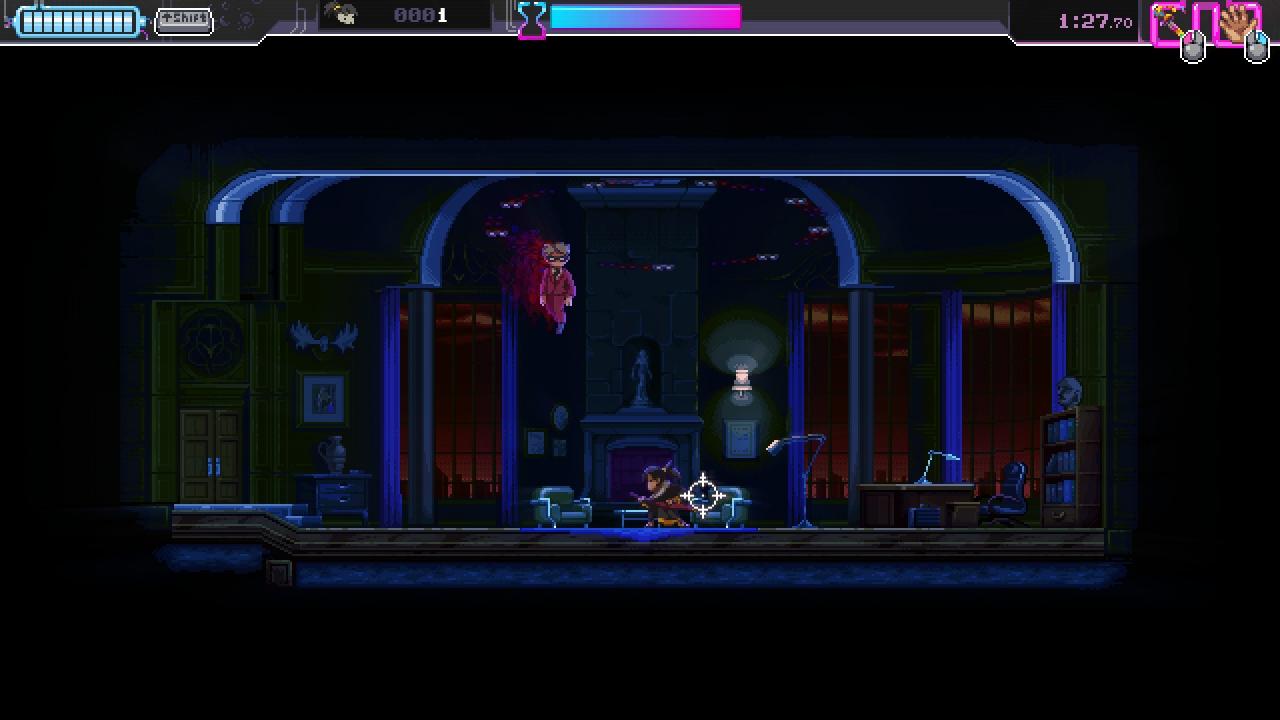 What comes next is several psychic doctors shooting blasts at you; these are reflectable but come at you at a very quick speed so try using slow-motion to reflect them. No more than three should fire in normal mode before transferring into the phase shown below. 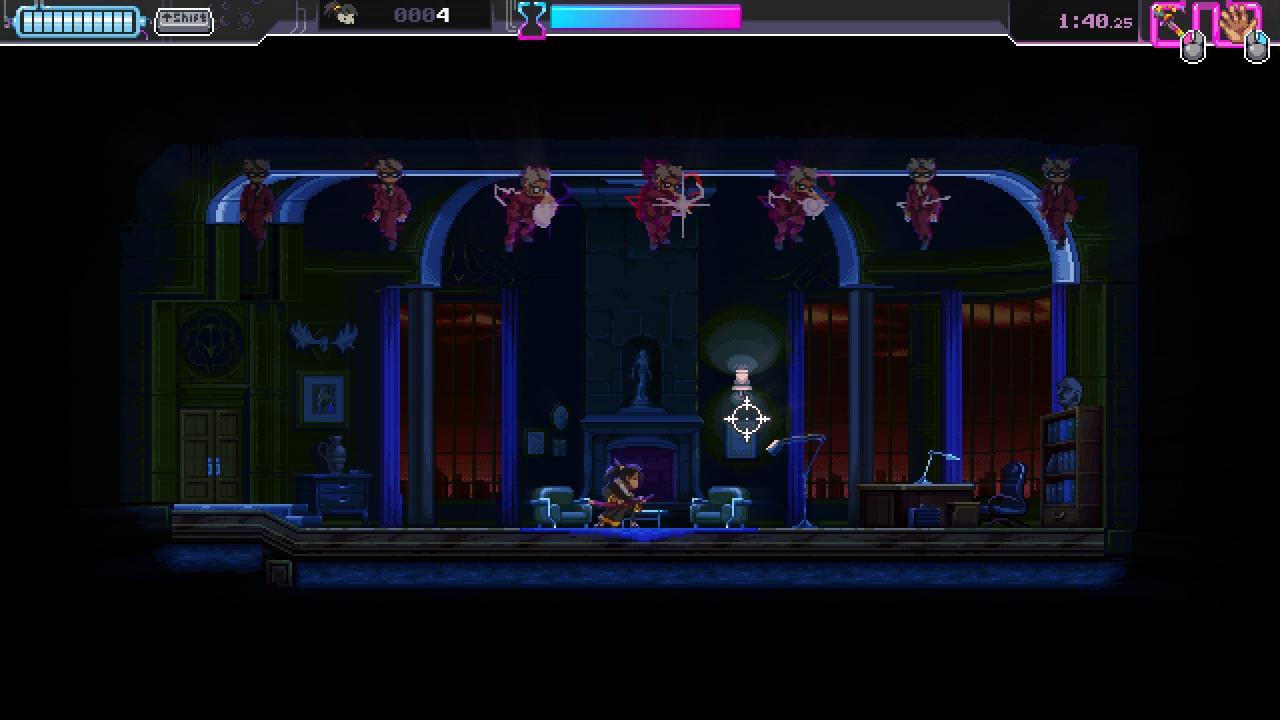 Once they’re in line, for the short moment that they are, they will shoot straight downwards at a random point. Reflect these directly upwards to deal damage to the doctor. Try go for 2 during this phase as it makes the next steps easier but it’s safer to go for one.

He will repeat his first phase of spinning in a circle firing random shots at you before transferring into this. If you haven’t got 3 or less left you better pray and get your slow motion ready. 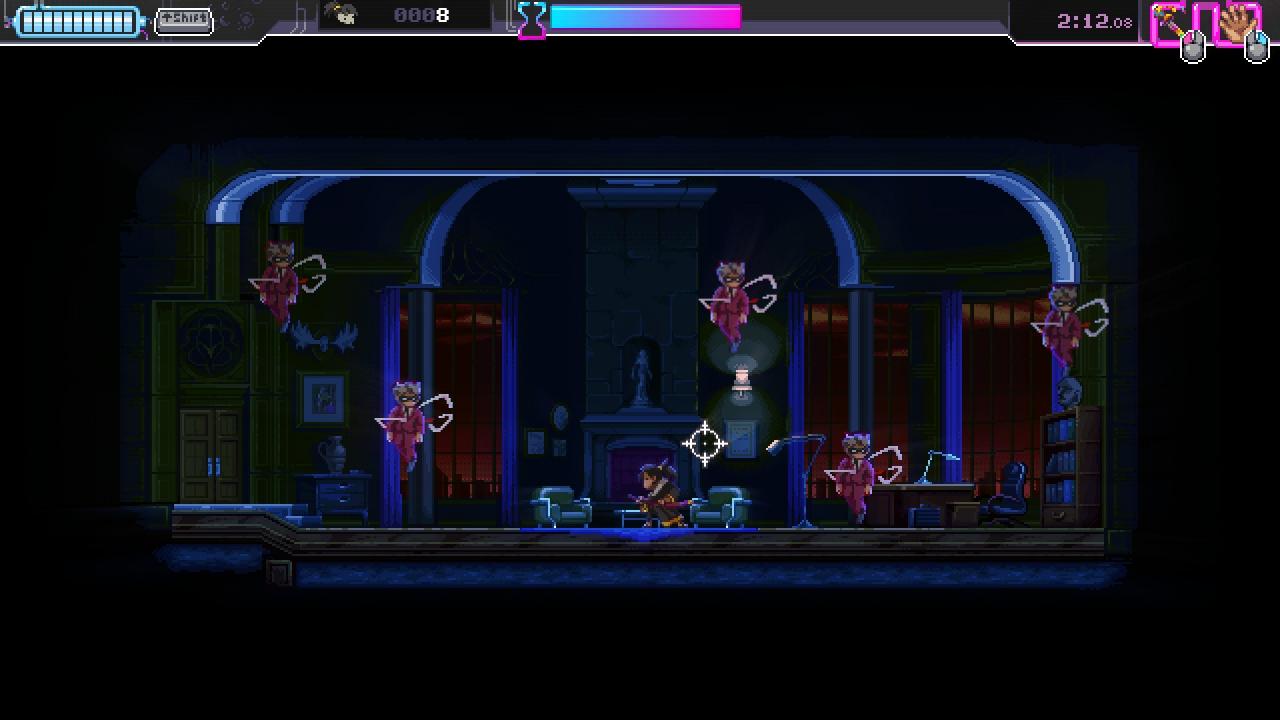 The Doctor will teleport all around you to try and ♥♥♥♥ up your day. All of them will fire in unison. You won’t be able to reflect them all, even in slow motion, if there’s more than three so do your best, reflect as many as you can, and repeat the process. Once all of them are eliminated you’ll transfer into phase 2: Horror.

This is the creepiest thing you will deal with in this game. Eyes will spawn in the center of your screen and, to not die, you must hit them so they close. There are five different stages:
READ:  Katana ZERO Secret Hunter Swords Guide

Deal with these and boom presto that’s stage 2 done! Not so bad right! Look at the poor doctor now all knocked and weak! 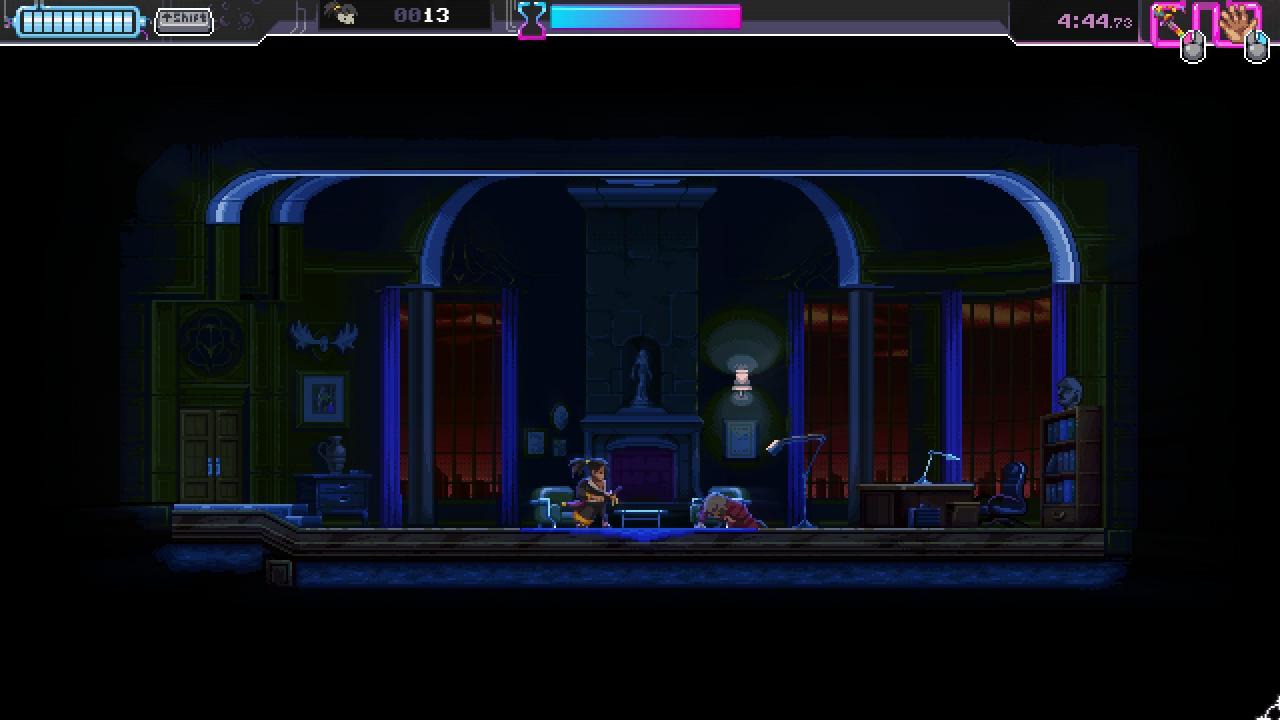 Look at how the little doctor man grovels!
Gloat while you can because it’s about to get a whole lot worse!

If you thought it was hard before you’re about to have a bad time. It’s going to get worse from here so best of luck, keep calm and don’t lose that cool of yours. 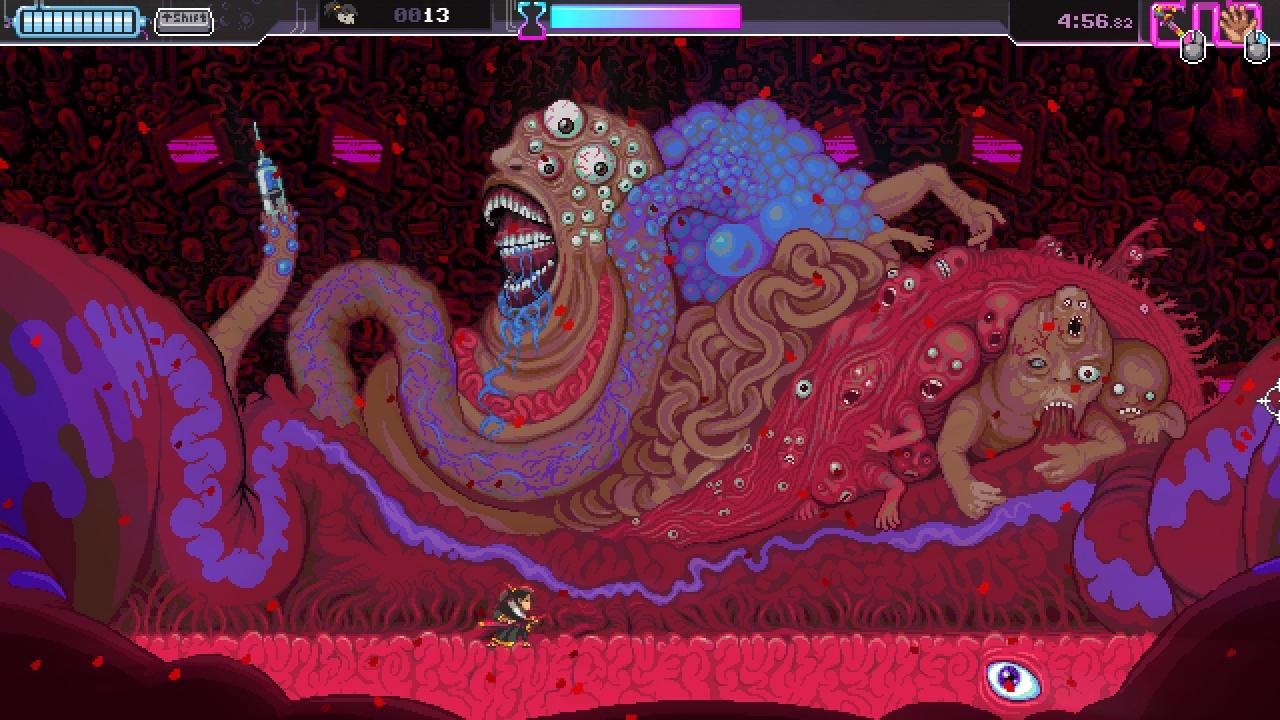 This, ladies and gentlemen, is the secret final boss! The Psychiatrist: Horror

He has several different move sets you will have to memorize if you want to beat him.

I will explain each of these in as much detail as I can because getting a clean screenshot of these is like photographing bigfoot.

This one is arguably the easiest to deal with, if not the second easiest, due to the fact it looks more daunting than it is. The entire topside of the screen will spawn portal in which needles will drop out of. You are able to ignore 75% of these and focus on the closest left side to yourself.

Here’s step by step on how to deal with them:

1. Spot furthest needle (either far left or far right)
2. Run towards corresponding side
3. Wait for needle to drop
4. Roll to use your invincibility frame

Simply repeat this process whenever this spawns which is a lot.

This one is, in my opinion, one of the most difficult to deal with. Every part of your screen from the bottom left corner across the top into the bottom right corner will be covered in portals which you are expected to dodge. Follow the same principal as the previous needle problem except after your first roll you will most likely have to jump as the second needle from across the other side of the screen is flying at you at mach 10. Always focus the side that spawns first.

They look exactly how I’ve said: rotisserie chickens. Several of them will pop out of the ground. They aren’t a huge threat but are more inconvenient than anything else, try to get rid of them as quickly as you can and be careful for their blasts they shoot at you. They usually go in unison with the giant needle coming out of the sky to ruin your day (6).

This is one of the easiest to handle. Approach it the exact same as the random order except you wont have to panic as much.

RANDOM BIG NEEDLE THAT COMES OUT OF THE SKY

The mushy doctor wants to stab you with his needle.

We don’t want that.

You don’t even have to roll this one tbh but it’s safer if you do. Any contact with the needle, or the area around the needle, will instantly kill you. More of an inconvenience than anything else.

The man himself, psychiatrist, has come to play.

After every fourth (4th) attack he will come out of the ground in this form known as the tentacle form. You need to hit him as quickly as you can!.

This is the only opportunity to deal damage and, unlike many of the bosses in this game, it’s going to take three direct hits on the doctor to kill him. So be prepared for a grueling battle.