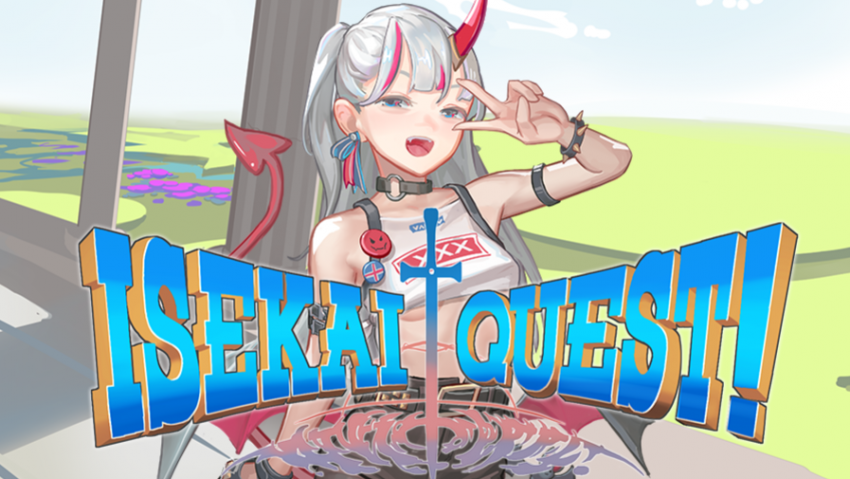 For ISEKAI QUEST players, this is a guide that explainHow to summon and defeat the Final Boss (with diagrams and pictures), let’s check it out.

How to Summon the Final Boss (and what to expect)

The Final Boss appears after you have filled all of the girls’ love meter at the same time. Basically you have to run the table and beat all of the girls 3 times without a single loss. For this reason you should rank the girls from hardest to easiest and fight them in that order. And that’s because the girls’ HP increase after each successful battle, and only reset after a loss. And that means that by the time that you get to the third girl, she will be maxing out at 5000 HP. Have fun with that for the rest of the battles (see my subreddit for more details).

Ok so now for the Final Boss himself. Like the girls, you fight him in three rounds. He does a basic attack for 200 HP. His special attacks are random use of Maphy’s poison (-10 HP per stone per turn), Eris’ bombs (-250 HP per bomb) and Agnes’ familiars (they spread, but they do not add extra damage to the basic attack). Your basic attacks will not work, and you can only damage him by completing Quests (+5000 HP) and whatever damage your level of the Strike skill does (you should have it at level five doing +500 HP). In round 2 there is an extra form of damage, but the Quest stones can’t be cleared for the +5000 HP bonus (see below).

The Boss starts with 15000 HP. Your field is a single Grid 8×7 and the twist is that the stones move from bottom to top. Also, as mentioned above, you can’t do normal damage. Use Quests and Strike. 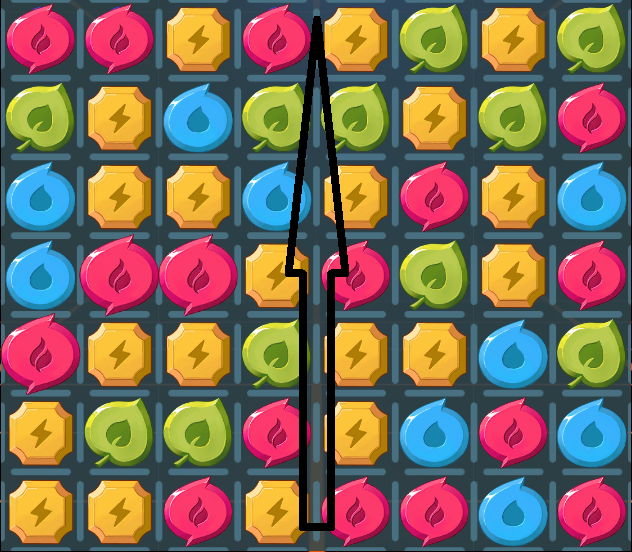 The Boss starts with 72000 HP. Your field is split into two 4×9 Grids (Pic 1) going top to bottom, with the left grid feeding the right (Pic 2). Basically imagine that the left grid is stacked on top of the right grid for one long 4×18 grid. But you cannot make matches across the two grids, nor manually move stones between the two. 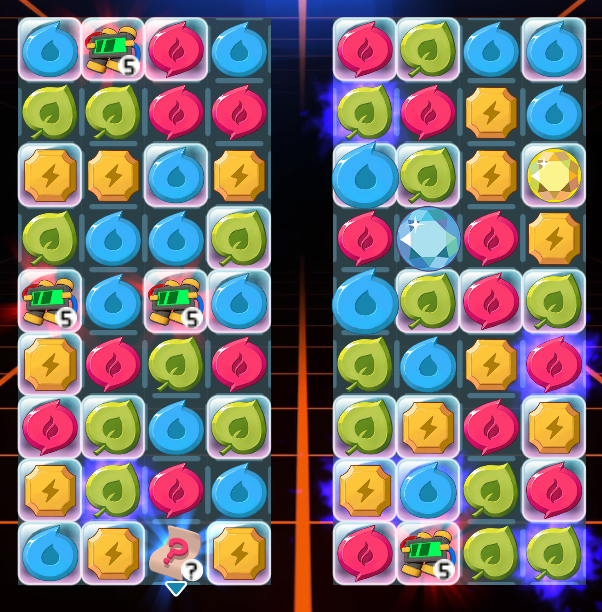 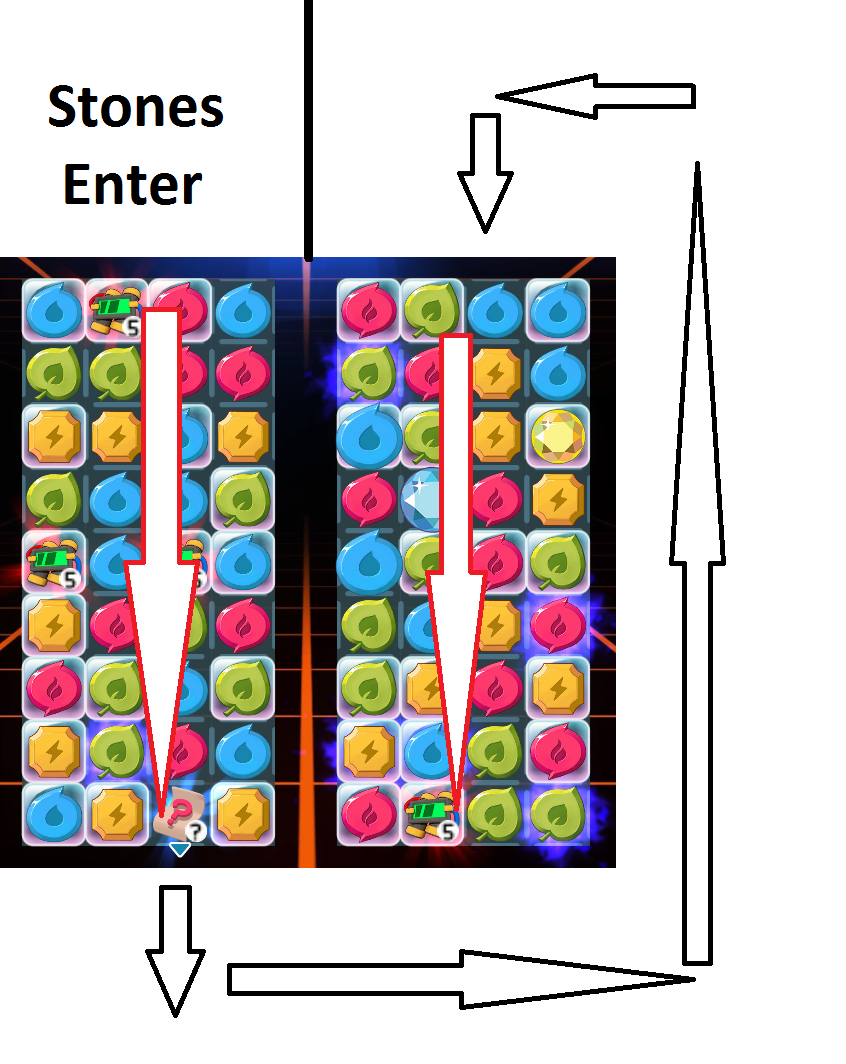 Your extra damage comes from a one time bonus on each square. You do +1000 HP each time a square is cleared by a match or a hammer for the first time (Pic 3). That’s in addition to the Strike skill damage. 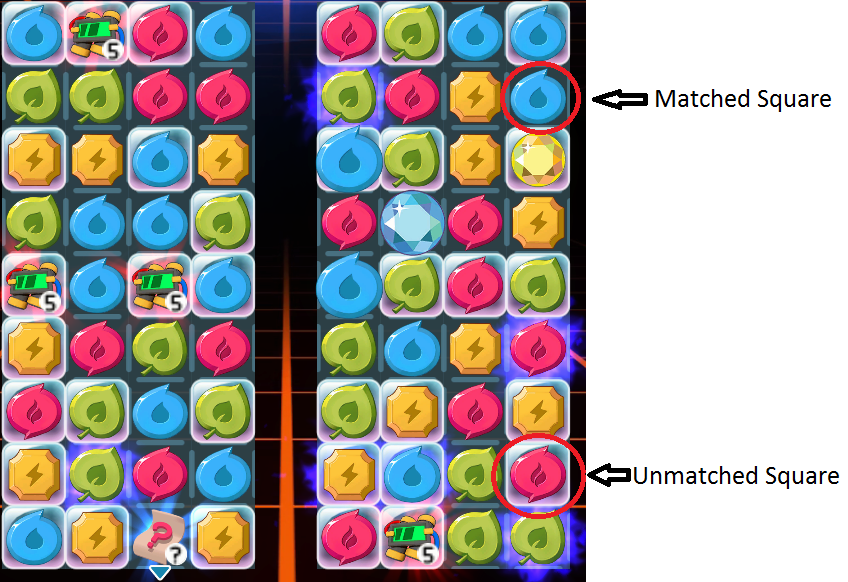 First, the mini grids are arranged as: (Pic1)

Third, the stones start in Grid D, and move to Grid A, then Grid C, and then end in Grid B. 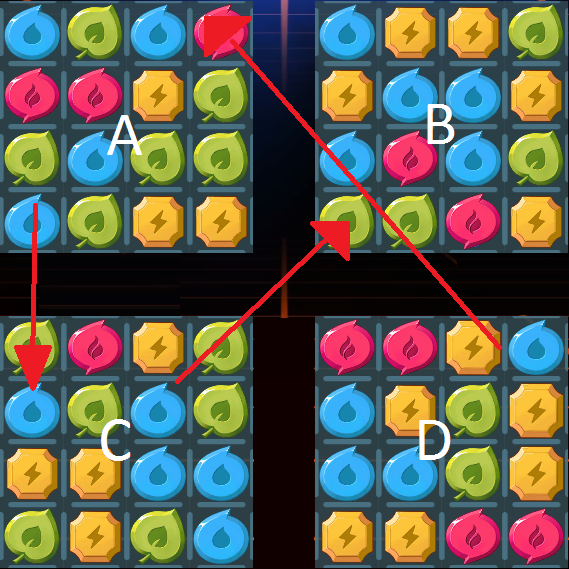 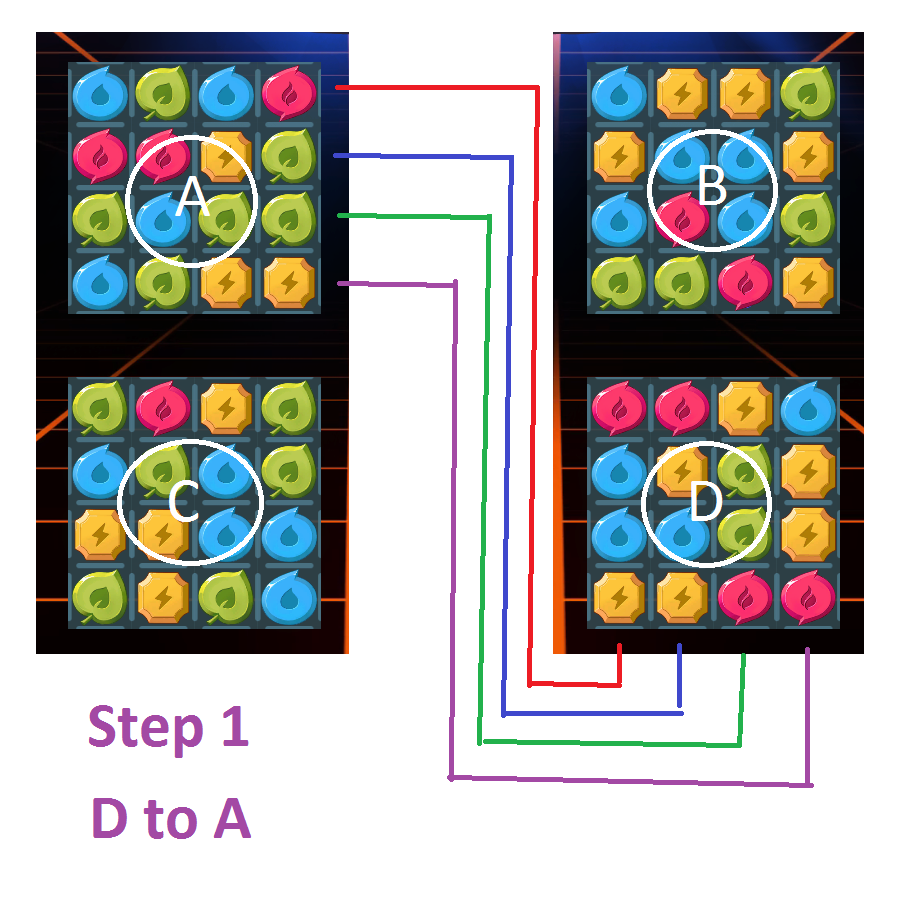 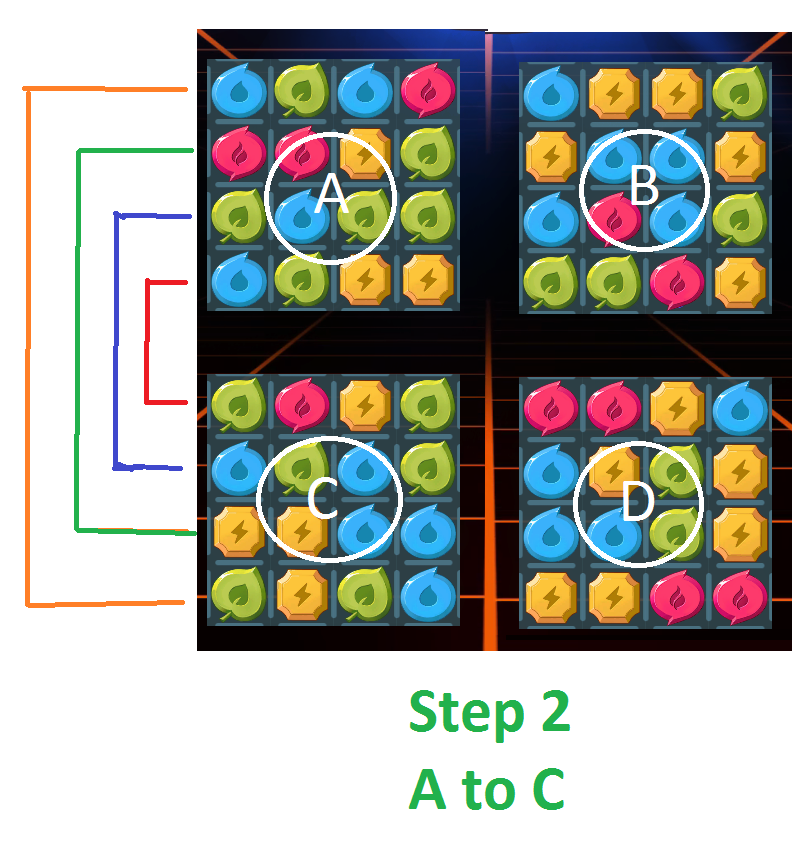 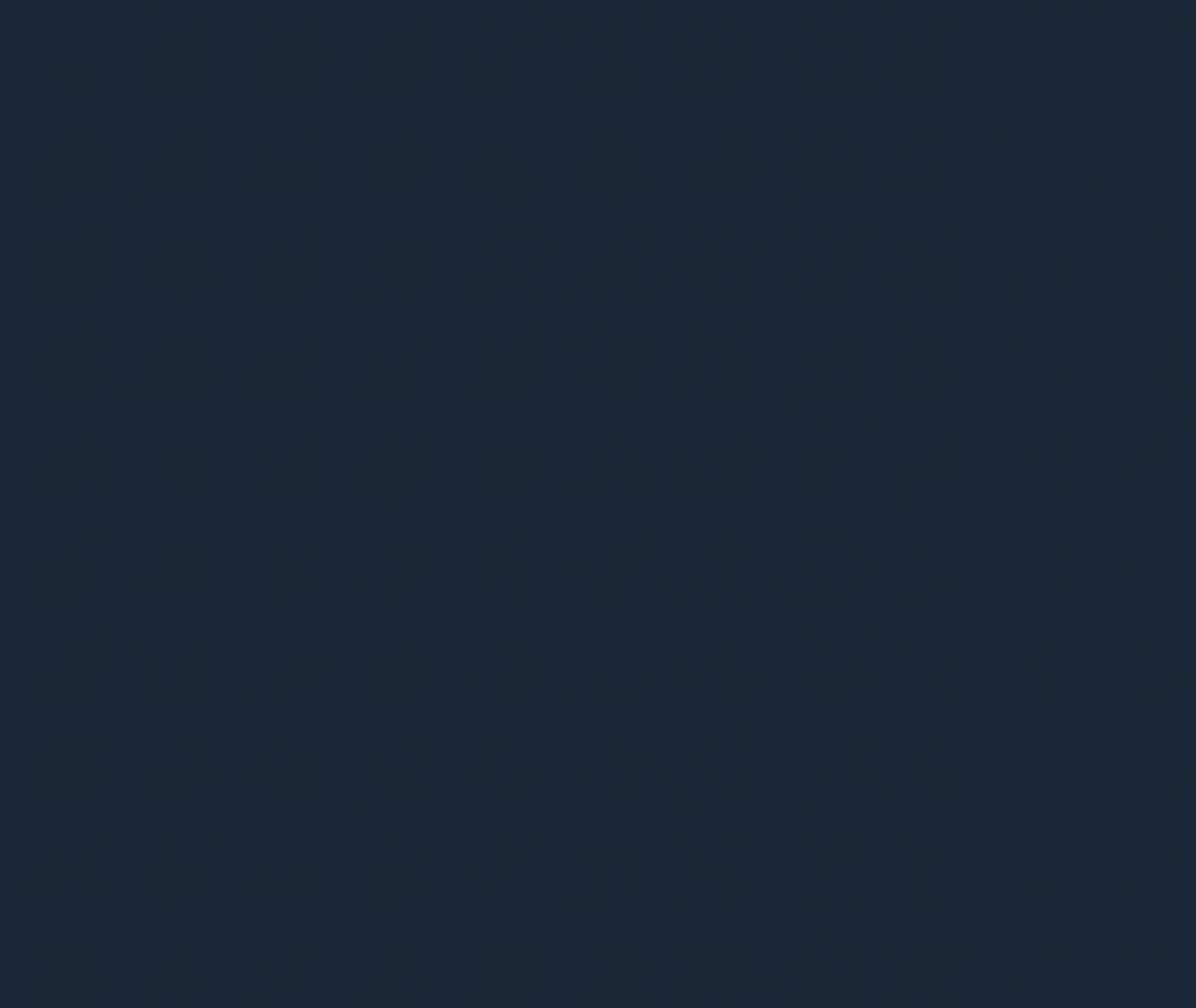 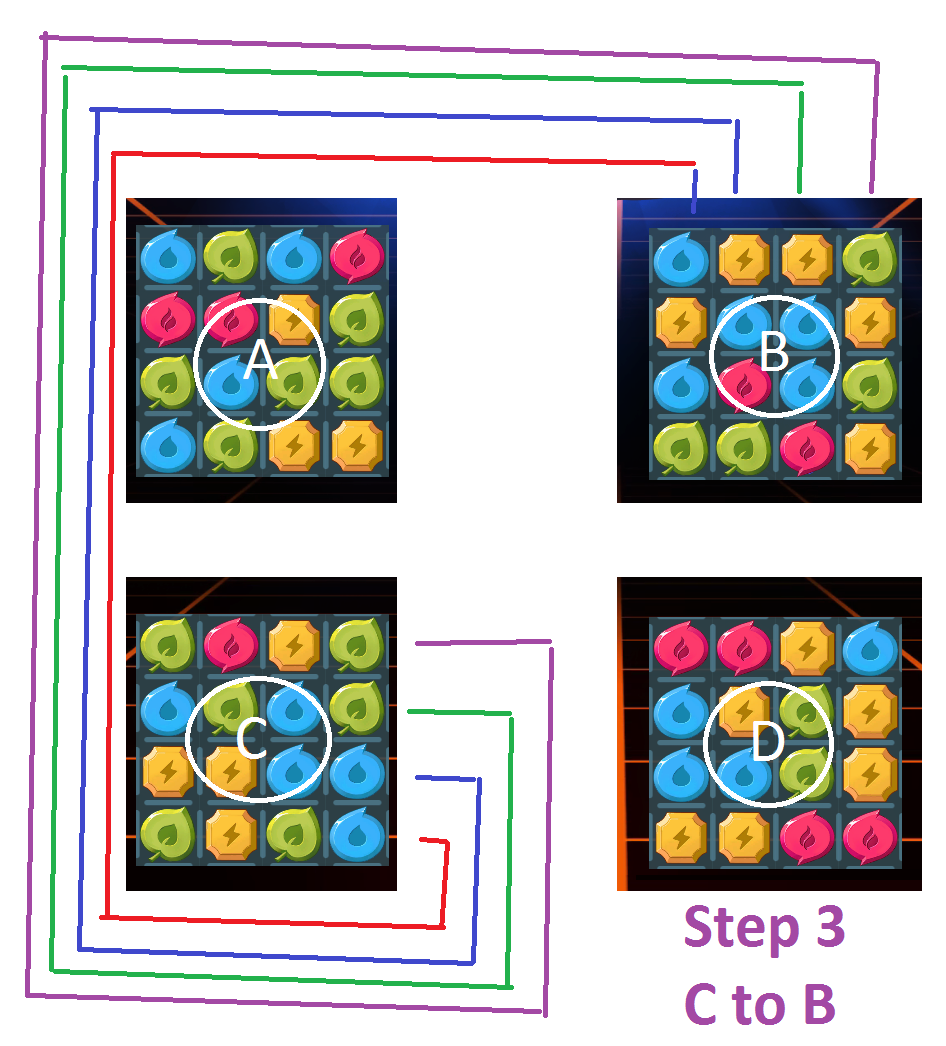 Fifth, because the mini Grids are so small, the biggest danger is running out of moves in one or more of the mini Grids. It is especially dangerous when the mini Grids fill with non-matchable stones like bombs, familiars, and debris. Use your hammer when you need too. This is one of those few times when a Mushroom or two could be appropriate.

Sixth, do most of your work in mini Grid D. That pulls along all of the other stones from the other three mini Grids, and gives you a lot more matches.

OK, if you beat round three, you get the following message:

7ZSM66CI7J207ZW07KO87IWU7IScIOynhOyLrOycvOuhnCDqsJDsgqzrk5zrpr3ri4jri6QuCuuLpOydjCDsnpHtkojsnLzroZwg65iQIOunjOuCmOu1kCDsiJgg7J6I6rKMIOuQmOq4sOulvCwg7KeE7Ius7Jy866GcIOq4sOybkO2VqeuLiOuLpC4=
It is in Base64, and when decoded it is in Korean and says
플레이해주셔서 진심으로 감사드립니다. 다음 작품으로 또 만나뵐 수 있게 되기를, 진심으로 기원합니다.
Which loosely translated into English means
“Thank you very much for playing. I sincerely wish to see you again with the next work.”
Sounds like a nice way for the devs to congratulate you on beating the game 🙂
READ:  ISEKAI QUEST 100% Achievements Guide

That’s all we are sharing today in ISEKAI QUEST How to Defeat The Final Boss, if you have anything to addm please feel free to leave a comment below, and we’ll see you soon.