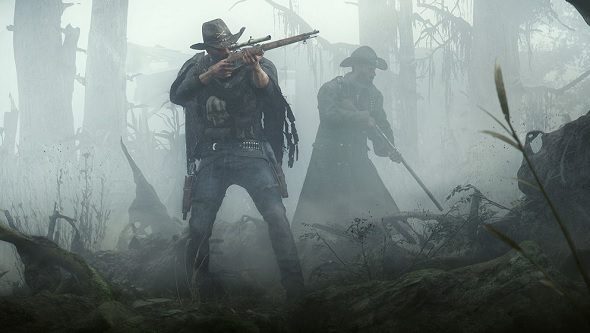 here is a guide on how to get better at Hunt written by someone with a total of 3900 hours in the game across 2 accounts.

Learning the PvP for new players

The best way to learning the PvP quickly is getting into any possible fight you can get into. If you hear shots, go towards it. If you have the bounty and see players, fight them. Running from combat is not gonna make you improve. Trying to run the gauntlet is also very good, people will know where you are and you will be vulnerable but will also teach you to be more aware, learn where players position themselves and where to expect players. Dying is not a sin.

If you want to improve your aim, the first thing is to stop using shotguns and start taking rifles. Here are two rifles with their pros and cons.
Winfield:
Pros:
– Not punishing because of it’s high ammo amount
– High rate of fire (even higher with the Iron Repeater trait)
– Very easy iron sight
– It’s a very affordable weapon
– The weapon has low sway and low recoil
Cons:
– Damage drops rapidly the further the enemy is
– Headshot kill range is low
Mosin:
Pros:
– High damage (Up to 136)
– A headshot will kill it on almost any range except through walls)
– It is very easily usable as a sniper rifle but can also be used in close range
Cons:
– Low ammo amount
– Slow rate of fire

Pushing compounds and fighting in close range is viable even with rifles against shotguns. Doing this will rapidly improve your aim and positioning skills. Double tapping is a very nice mechanic you can use in close range rifle fights which will allow you to kill players quickly.

Shooting someone with your primary then switching to your secondary and shooting with that will allow you to quickly kill your opponents even with guns that have slow rate of fire. This will make it easier to kill shotguns in close range.

Make sure you always have the maximum amount of tool and consumable slots in use. A go-to setup for tools would be Knife + First Aid Kit + Dusters. I recommend always taking atleast 2 big vitality shots and 1 explosive or fire bomb (2 in case of Packmule) or 3 weak vitality shots.
READ:  Hunt: Showdown Best Poison Build Guide

You can find out a lot by just using your ears. There is a lot of sound traps around the map. This includes:
– Horses
– Crows
– Ducks
– Chickens
– Trapped Dogs
– Aggressive Armored
– Aggressive Hives
– Aggressive Zombies
This can let you predict the position of enemy players which gives you an advantage.

Game sense and game knowledge comes with the hours. Analyse how your enemies move and how they position. Learn how the average player moves and where to expect players. Once you start learning this a lot of weight will be taken off your shoulders.
Written by Angola