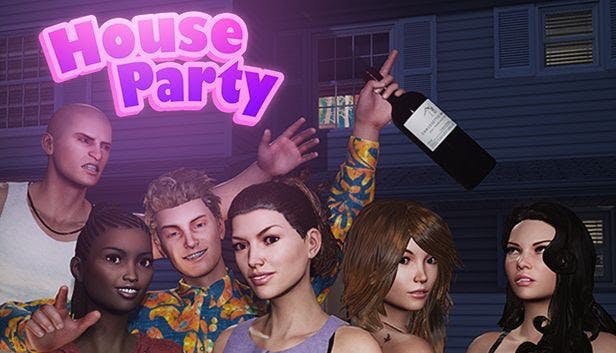 The easiest way to get one of the hardest achievements in House Party.

Note this guide only covers this single achievement and should be made on a new playthrough.

Let me know if this helps or if something is unclear and I can fix it.

Alcohol, no matter what kind it is, when consumed will let the player hit harder.

Go and find all of the hidden alcohol spread around the house. We need all the help we can get when dealing with Frank’s powerful attacks.

See below for the locations provided by germundson’s guide for Natty Lite.

Where to find Natty Lites:
In the family room (where Steph is dancing), behind the right speaker)
In the garage, on the shelf furthest to the right when entering
When entering the master bedroom, on the top shelf to your left
In the office, under the desk (press [C] to crouch in order to reach it)
Upstairs bathroom, behind the hamper (use [Ctrl] to bring up a virtual hand, click and hold over the hamper to pull it out of the way)
In the living room, on the floor next to the armchair nearby Frank. (have frank go beat up Patrick to grab this no issue)

And the chardonnay from inside the the closet in the room with the washer and dryer.

Grab the wine from Patrick by having Frank beat him up or by doing it yourself.
(Note doing yourself might make you take damage so I had Frank do the heavy lifting.)

Now for what makes this easier then normal strategies.

Grab the mysterious key on the fireplace mantle so that Madison’s bedroom can be locked and unlocked. We want to be able to unlock and lock the bedroom as no one can get into it even when pursuing the player.

Consume all of the alcohol and SAVE RIGHT BEFORE THE FIGHT!

Wouldn’t want to go through all that again. If you try to get this achievement without the alcohol, you will noticed you do 1.5-2x as much damage now.

I’ve seen people talk about different strategies, but what I found was to get him outside, keep a distance and to strike when he is in his running animation. He stops moving then attacks so hitting him before he stops is the most ideal time.

His most powerful attack can 1-shot you, but he has to be in a certain angle for it to work. Your more likely to have Frank stun you and finish you off in a few more hits.

I usually like to get him down a third of his health before I do this next part, but feel free to do this a frequent as needed.

This is were it gets tricky, you want to put as much distance between you and Frank as possible (Stunning him will work too).
After that HIT THE SPACE BAR TO GET OUT OF COMBAT STANCE! Run inside and go upstairs to Madison’s room, close the door and lock it with the mysterious key. Frank cannot get into the room and you can breath for a second.

Before if you saved, the character would still be unable to move, but Frank would close the gap and knock you out. I don’t know why it’s a thing, but it is.

You need to open the door, run backwards and hit the combat stance button all at the same time. You can either juke Frank or hit him to stun him to get back downstairs and outside.

Then rinse and repeat over and over till you win.

Reloading the save in Madison’s room during the fight will give the player full health.
READ:  House Party 0.17.3 Censor Problem Solution

Madison’s room is the most ideal for this method, but any of the bathrooms work as well.

The Dev has confirmed that there are health items, but the saving restores all health so it seemed kinda useless. Plus navigating the inventory while Frank is in hot pursuit is difficult and will most likely lead to having to start over.

There will most likely be other people in Madison’s room when you are doing this trick. Try not to get stuck on them or to hit them. I got knocked out because Patrick was walking downstairs at the same time I was.

Avoid getting trapped in dialog boxes as Frank can move, but you cannot. Basically don’t be naked while fighting Frank unless you want to make it harder for yourself.

And that is that!

I hope this guide helps you get the achievement and cut down on the time it would normally take as it is still difficult to win.