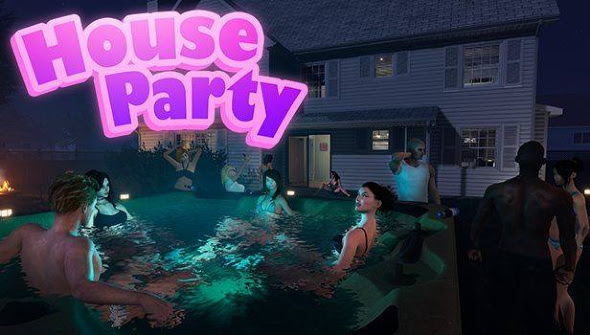 If you play House Party, this is a list of the console commands that i have been playing with on my mess around save of house party. I’ll keep adding more as i find out how to work them, let’s check it out.

The console commands are used for testing, story making, information gathering or just generally messing around.
They help with story progression, undressing the people at random or more importantly. Let you f*ck the person you want to without going through the “missions”Do be aware, the minute you type the first command. All achievements are disabled

So how do you access the almighty console commands I hear you ask. It’s simple, just press the button on your keyboard that looks like this:

Its usually located to the left of 1 and above the tab button (on UK keyboards, might be different on others. Not entirely sure about that)

Once you press it, a black box appears at the top third of the screen. All console commands are entered here.

How onto the fun bit

It’s getting hot in here, how to take off all your clothes

So..the time has come (no pun intended) to show get your birthday suits out.

Here is the command for stripping

>clothing all all off

This takes all the clothes of all the people at the party, all is laid to bare.
But that is not all, below is a more detailed list of the commands available for instant stripping

“All” can be replaced by any named character in the game, including the player. Here are a few examples

you get the general idea now i hope.

Yup, time to know you deeper

Now that the person/all are naked, it’s time to get to the fun stuff. What’s the point of a house party is people don’t hook up right? (i dunno, never been to one)

As always, open the console command here we go.
This follows a same pattern, you type in the command, the person/people involved and what act they are doing. Here is an example

This basically means the player will get some head.

Of course, the names can be altered as well as the act involved. Below is a list of the acts and the people who can peform them.

Usually its the male character typed first, followed by the female…but not always.

Digging around in the darker corners of the game commands, the already mentioned strapons make this all the more interesting.
If you give one of the girls the strap-on, then they get to have fun of their own.

READ:  House Party: Easier Way to Get The Harder They Fall...Dood

You dont need the use the strap-on for it to work, but it looks weird without (play around and see for yourself, dont think steam would like the screenshots)

You can always have them enjoy some “alone” time if you get my meaning. Simply use this command

Ashley will please herself on the floor

Get your fight on

Combat….what party does not end in a brawl at some point

Do you want to see the girls going at it? Or the men have a fight just because you can. The here is the command for you

this will make Derek and Patrick fight
Not got you interested? How about this

>combat all all fight

everyone in the house will have a massive free for all (luckily this does not include the player so you can watch and laugh. if you do want to join in, hit someone and they will go for you as well)

Lets say you want to watch Patrick passout and wake up over and over again as it amuses you (does me anyway). Type this in and enjoy the fun

you can of course use “all” to make everyone passout at the same time, or wake up.

Remember you can change the names as you see fit.

That’s all we are sharing today in House Party All Console Commands (Cheats), if there are anything you want to add please feel free to leave a comment below and we’ll see you soon.