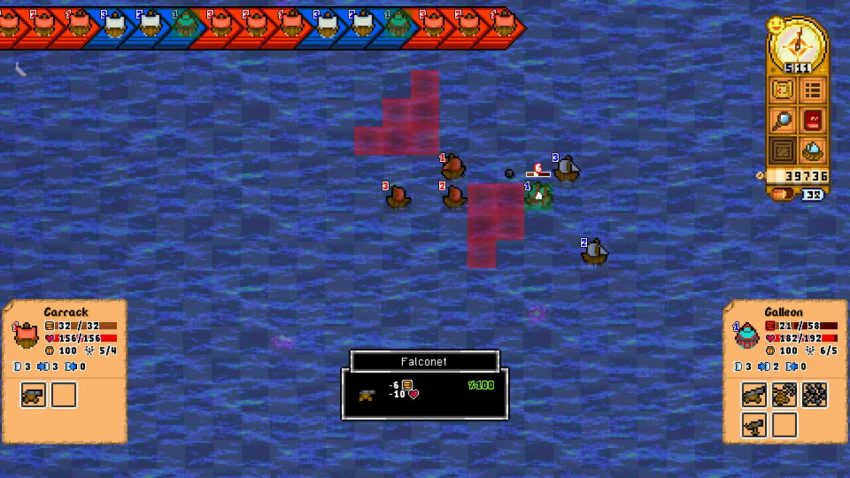 Boarding some unsuspecting ship just to find that you’re outnumbered, outhealthed, or both? Do not worry, fellow pirates and privateers! This easy and horrible method of temporarily (and sometimes permanently) getting rid of your adversaries will sure help you permanently borrow their ships.
(Success may vary depending on weather, ship type, difficulty setting, and other factors)

Let’s get right into this horrible guide

This guide is about pushing and bashing people overboard ships.

This in turn makes it easier for you to capture ships.

I don’t know if people are doing this to their utmost advantage so here’s a guide to spread to word of the greatness of Push and Bash!

You’ve got to kit your crew out with something!

The goal of this guide is to get you to be able to push people off of their ships as quickly and effectively as possible! Sure you can use wind magic but early game wind abilties aren’t good enough. What you would want are a shield and a spear. Grab some armor while you’re at it! The shield already can inertly push opponents while the spear has reach.

Why not use whips, they also have reach! you might ask. Well, whips are low damage and aren’t really cool. It’s not like you’re going to be pushing people diagonally either!

Heave is the cheapest option that all starting sailors can afford! However, the ability simply only push (only dealing damage when the enemy unit is pushed into something) and is pretty bad until you’ve upgraded it to have at least Push 2.

Swagger is an good early ability at allows you to move a bit more and provides a Morale boost to your unit! However, it is probably better to invest in Sidestep instead of this ability.

Sidestep is the Scout class movement ability. It provides a +30% physical dodge chance after you use it making it a great option to rush units in and out of enemy range. It is expensive to upgrade, but you can have like what; an additional 5 movement with this ability which turns you into SPEED.

Bash is the ULTIMATE ability for pushing people off of boats! It is a direct upgrade from Heave as this ability not only pushes but deals damage with a select melee weapon of your choice! That means adding an extra push to your shield attack (which is unnecessary for this guide) or allowing you to push enemies at range with your spear.

So you’ve decided to attack this merchant fleet consisting of a Carrack and two Cogs. It is time you put your pushing abilities into action! Merchants usually have pretty bad and low morale so don’t worry if your ship is taking a lot of damage. After capturing a ship or two, their ships will (hopefully) retreat and not fight back allowing you to chase them down and continuously board them until they drop dea. As long as you have at least two ships and avoid being targeted by the enemy’s sakers (which you probably can’t), you’ll be able to board and capture their ships with ease (and if not, you can reload a save file)!

The crew onboard Cogs usually only consists of three crewmen making Cogs extremely easy to take whether or not you push people overboard. Cogs are also small being only around 8 tiles wide making it easier for your units to close in for the pushing, shooting, or stabbing!

Oh no! The crew onboard the Carrack you’ve boarded consist of five crewmen! Do not fear! Simply follow the list below to achieve pushing!

My apologies, fellow Scurio comrade, but in order to permanently borrow and commandeer this vessel, I must push this poor Buralk over the railings of this ship. Our quest to conquer this Cog cannot be slowed, though this vessel may indeed only sell for 180 gold.

Once you’ve pushed the person into the cold ocean, they will be unable to do anything. They will count as basically being downed. If you eliminate the remaining enemies on board the ship, the person you’ve pushed into the sea will automatically stop existing. However, if you run out of time during the boarding battle, the next time you board the ship they will be aboard, but also Wet.

Basically by pushing your opponent into the ocean, you have temporarily eliminated them from the battle. In other words, you literally one-shotted them in a sense.

Once you’ve built up your crew to about 25 units geared with steel across 5 ships, you can absolutely conquer any ship through swarm boarding!

Why pushing doesn’t work too well

Ship railing does its job
Even once you’ve acquired the power to push people 5 tiles away, the railings around the common ships will stop them from falling into the ocean. This makes sense to prevent absolute shenanigans with ultimate bashing.
READ:  Horizon's Gate: All Ship Stats

This is extremely situational
So you need to have a unit with bash or a shield that can move in front of an enemy unit that is on a railing tile to make the push. The AI has a tendency to avoid staying too close to the railings which contributes to the unreliability.

Heave literally sucks
Yes. Heave makes pushing people off the ship even more difficult, but this is why you go for chad Bash instead >:(

Being chilled in the snow
In the wintry north, you will automatically be permanently Chilled during the boarding sequence. This means you will move absolutely SLOW and will be unable to push anyone off the side of the boat.

Now you know more about how to capture ships in your early game easier with Push!