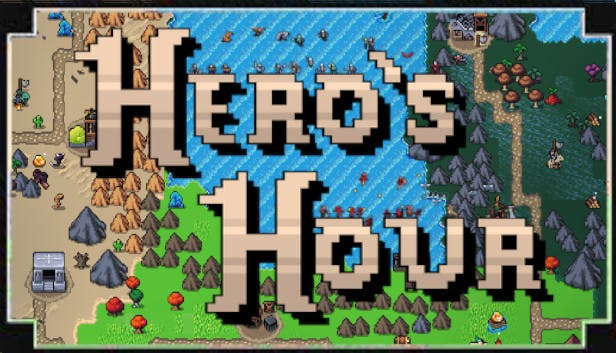 For Hero’s Hour players, this is a complete guide to all skirmish levels offered in Hero’s Hour, let’s check it out.

This guide was created shortly after the initial release of Hero’s Hour. It is unlikely to be very optimized. I will update this for at least the next few months(summer of 2022) as I gain more experience with the game. I’ve probably 1000+ hours in the Heroes of Might and Magic(HoMM) series, so when I saw the trailer to this game it immediately caught my attention. This game is obviously inspired by the classic HoMM series but relies on trends that run counter intuitive to what you might expect in a HoMM game. I hope to help those struggling with this mode with some actionable hints and tips.

1. The most important difference in my mind between Hero’s Hour(HH) and Hero’s of Might and Magic(HoMM) is how unit tiers tend to scale inversely to general power. Specifically, in terms of raw attribute distribution, in HH, lower tier units tend to be more gold efficient than their higher tier counterparts. This is opposite to how HoMM generally worked(barring hero abilities/spells/items, 5k gold worth of Titans, a T7 unit, would wreck 5k gold worth of Gremlins, a T1 unit). In HoMM, it was expected that high tier units be more cost efficient due to the initial cost of developing a settlement to access them. In HH, 5k golds worth of skeletons will destroy 5k golds worth of Bonewyrms.
Examples from HH:
Notes:
-“Power” as a stat from what I can tell is an internal variable by which the AI calculates relative strength amongst armies, and may help them determine if/when they will attack on the campaign map, but has no direct influence during combat. Please correct me if I’m wrong.
-Bolded and Underlined values means better gold cost efficiency(not power efficiency) for the comparison
-Abilities not taken into account, generally skews calculations in favor of low tier units
-Non-gold costs not taken into account, generally skews calculations in favor of high tier unitsNature’s Wrath Low Tier Unit:
Excavator: 2 power/38 health/6 damage/4 speed
Cost: 75g
Gold Efficiency per stat:
.027/.51/.08/.053
READ:  Hero's Hour Achievements Speedrun with Earthen

I haven’t played enough to definitively say that high tier units are generally bad, especially when commander-sourced spells come into play, as a large mass of low tier units will take much more damage from AoE direct damage spells during the campaign than a few high tier units, however neither the player nor AI have access to these spells during skirmish mode. All in all, what I’m trying to communicate is that the bulk of your army should be comprised of lower tier units just due to the sheer amount of stats they bring to the table.

2.High tier units can be useful if they give an aura or cast spells, especially if you have enough lower tier units to tank/get value from the aura. But you generally never need more than 1-2 of them. Standouts in the skirmish mode that can be used include the Shah, Wise, and Arbiter.

3. There’s a handful of abilities that are overtuned/not correctly adjusted for their cost in terms of gold. I’ve found great success with flying(the execution from dropping units is surprisingly good and the dodging AI makes a mockery of melee), burning(as long as the battles last longer than 15 seconds/burning procs all resolve), and Leech Life(was OP in HoMM too).

4. In contrast, the stats that I find to be undertuned/not optimal in skirmish, are Ethereal, Immortal(Very good in campaign, but bad in skirmish, 30 seconds is just too long), Warding/Inert(access to spells limited in skirmish), Aquatic(You can guess why by now).

5. When fighting against enemy that are slow(specifically the zombies) and you have a ranged advantage, let the enemy come to you first by using the defend button in the bottom right. This allows your ranged units to get free damage while they move. Once their melee engages you, you can swap back to the attack option.

6. Spirited Fire is OP, quite possibly the strongest unit in the game at the moment. It doesn’t make any sense to be flying and that tanky for such a low cost. Their normal auto attack damage is mediocre, but their passives(burning and explosion) allows them to be high damage dealers as well. I would either increase their gold cost by a good 30% or decrease their hit points by that amount. Use them when possible.

READ:  Hero's Hour Powerful Start Guide with Tier 1 Units
That’s all we are sharing today in Hero’s Hour All Skirmish Levels Guide, if you have anything to add, please feel free to leave a comment below, you can also read the original article here, all the credits goes to the original author dyhwang2