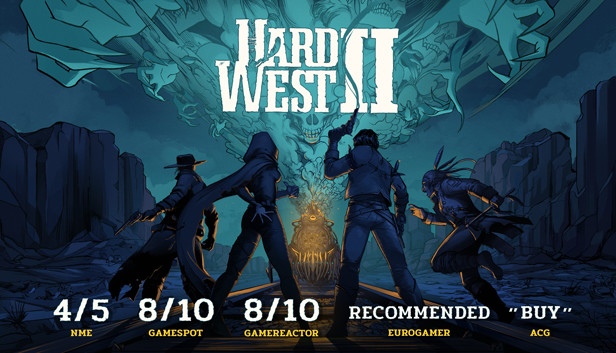 For Hard West 2 players who are trying to play the Nightmare Battles, this is a video guide on how to successfully face some of the nightmare fights

That’s mainly the first interaction you have with the game (other than the introduction). So let’s free our companion, and kill the law enforcement there (because we are not the good guys).

The Merchant of Boomtown!

A side quest that you obtain after you’re done with “Fooling the Hangman”. Talk with the merchant, get into the world map, follow some tracks (which will be mostly campfires spread around) and they will take you straight into a bandit’s camp where you get this fight.

This is the last fight in the prologue and the first real challenge if you’re playing Nightmare. The number of rounds you have to finish this is just about enough and that demands an agressive aproach. Always move your characters foward at the end of your round. Try to make the best use of Bravado but don’t kill everything (specially at the beggining) with only one character. Using Gin Carter’s special skill to lower many enemies health is also a good idea since that enables at least one kill per character meaning more action points.

Welcome to chapter one where dificulty spikes happen and missing one action can be fatal. This one follows the same system as “Merchant of Boomtown” meaning you will have to follow some tracks to locate your enemies. At least you will have a tracker (and a new companion) alongside for the ride. Also it pays up to level loyalty specially with Flynn (Wizards are always the best class in any game) and another companion that will soon join you.
READ:  Hard West 2 Train Job Achievement Guide

This is a sidequest you get during “The Ritual”quest. Nothing much here other than horseback duels which is kinda cool, even with the dizziness it provoked (don’t know if it’s a me thing). Anyways, kill them all get your well deserved reward and remember, no special skills during horseback duels.

Now this battle is interesting. Get another companion, before engaging those fellows and if you have the opportunity get him at least to ally rank. Also I reccomend completing some of the side quests (for money, mostly) and upgrade your gear. The “desert ranger” revolver is the way to go if you wanna make things easier. Buy Dinamite and all the other kind of throwing bombs you have access to. Getting to O’Kane is tricky but once you get there, killing him is not so hard. you have to have at least 4 rounds to spare though so pay atention to the limit.

Now this place is annoying. Mainly because everything is one hp away from dying most of the time. Don’t go with LD for this one (since he is mainly proficient with melee). Instead get yourself Lazarus or Bill and go to town. Bill`s special skill is OP if you know how to use it, but for that to be available you need at least one pair (cards) in his hand. By this time that won’t be a problem. Another thing is that you can have a full house (cards) on a character’s hand (I chose Gin Carter) so be aware of the cards and don’t forget to get your poker hands updated.
READ:  Hard West 2 Basic Guide for Beginner

The most entertaining fight I had in this game. So awesome to finally be picking up on Bravado and kill streaks! I can’t stress out enough how important are dinamites and throwing nail bombs at this place. I did allright but you can absolute destroy the whole map in 1 turn if you play your cards right. I guess taking LD was a mistake since an extra ranged companion would do much better. It was still a great ride.

If you thought Calla Calla was hard, well…you’re in for a treat. Welcome to insanity, anger and willing to rage quit levels of difficulty. Now don’t you worry, I got you. This first phase is the Wendigo Land. It’s not hard but there is a surprise once you’re done with it… You should have 2 full houses now so don’t forget to use those cards right.

That’s all we are sharing today in Hard West 2 Nightmare Battles Walkthrough Guide, if you have anything to add, please feel free to leave a comment below, you can also read the original article here, all the credits goes to the original author Roguenbauld