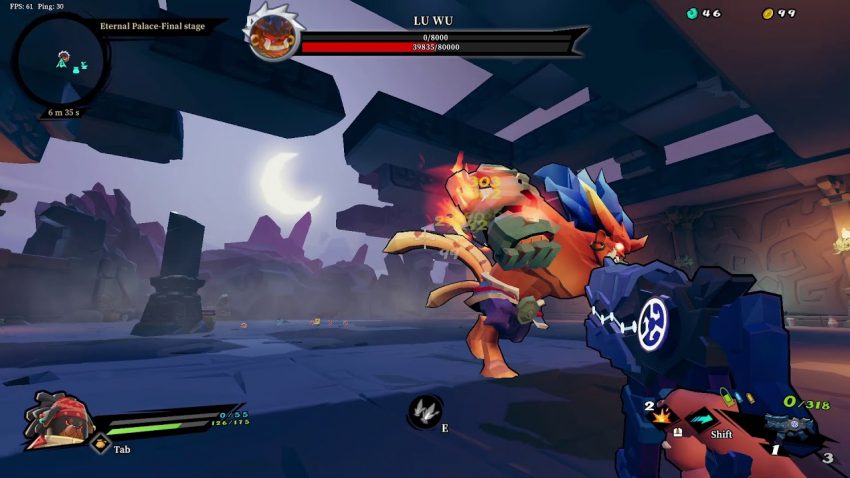 If you play Gunfire Reborn and looking for a guide of all bosses, this guide will share how to defeat Lu Wu, Ichthyosaurus Offspring and Yoruhime-Maru, let’s check it out.

The main gimmick with this boss fight is that when Lu Wu takes enough damage he will retreat and send bombers/beetles after the player. At low enough health he will never recharge his shield and relentlessly attack the player. The best strategy to fight this boss is to have a shock weapon to deal with his shield and never dash until he throws out an attack. While he is charging his shield it is possible to out damage his regen.

Rock Throw Attack: This attack is simple to dodge just dash outside of the red circle but be mindful of any nearby explosive barrels since this attack can detonate them.

Laser Fire: This attack is very difficult to dodge, the only consistent way to avoid taking damage is to take cover behind the two pillars in the arena. The good news is that the animation has a long start up so when you see him aim his hand at you start dashing to the closest pillar.

Melee attack: If the player gets close enough to Lu Wu he will raise his fist in the air and hit the ground dealing massive damage to the surrounding area. The best way to avoid this attack is to dash backwards from him when he raises his fist in the air.

Leap Attack: Lu Wu leaps into the air and lands on the ground hitting everything around him. This attack is very random because he won’t always land where the player is standing. The best way to avoid the attack is to dash toward his original location.

Mouth laser Attack: To dodge this attack you must stand very close to the boss and don’t move. Then when the boss starts to do the attack animation, dash the opposite direction and move away from the laser.

Bite Attack: dodging this attack is pretty straight forward just dash and move out of the red area.

Goo Launch Attack: The projectiles can be destroyed very quickly with a gun that has a high rate of fire or AoE capabilities. Allowing the projectiles to hit the ground will make the fight a lot harder.

Shockwave attack: This attack can be very tricky to dodge but the best way to avoid getting hit is to be standing on the ground then jump and dash at the peak of the jump toward the shockwave. Note that the closer you are to the tail the harder the attack will be to avoid.

The gimmick with this boss fight is that every time the Yoruhime-Maru loses 25% of its Hp it will have a barrier that makes it immune to all damage. To destroy the barrier the player must kill the Octopus that spawns on the left or right of the arena and place the shell that it drops into the cannon.

Cannon Phase: During this phase the player must take out all of the cannons, whenever a cannon is destroyed it will fire a giant spread of projectiles. As long as you are not standing still a majority of the projectiles will not hit you. I would recommend fighting in the middle of the arena because the Octopus can spawn really close to you and gun you down. There will also be mortar fire that will rain down in a horizontal line which can be dodged by dashing out of the way. After the first 25% hp the Yoruhime-Maru will fire projectiles that leave a trail of corrosive goo which can be destroyed with gunfire.

Giant Cannon Phase: During this phase the Yoruhime-Maru will fire a giant cannonball that will create a large explosion when it hits the ground. You should be moving forward at all times and never let the corrosive goo slow you down. Minions will constantly spawn in and should be taken out with grenades so you can focus on the cannon. Also, the mortar fire will be randomly scattered across the arena.

That’s all we are sharing today in Gunfire Reborn How to Defeat All bosses Guide (Contains Spoilers), if there are anything you want to add please feel free to leave a comment below and we’ll see you soon.