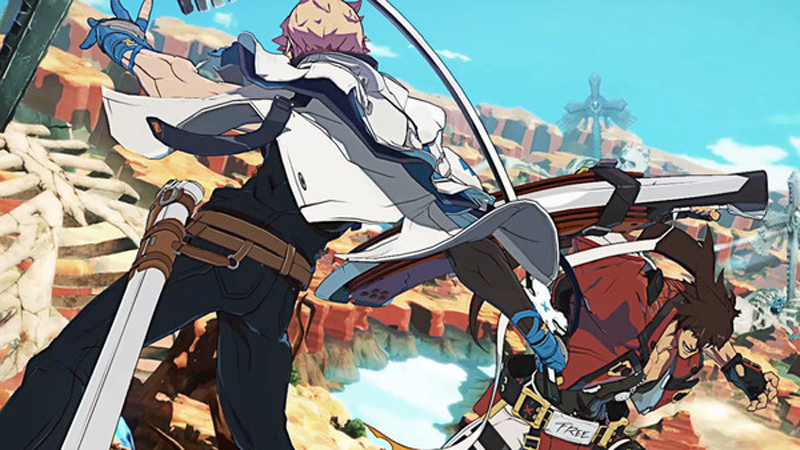 At the end of arcade mode, if you win a straight match against every single opponent you face, you will then fight a ridiculous boss character: extreme Nagoriyuki. Extreme Nago comes equipped with an invulnerable DP that will stop every kind of stagger pressure you attempt and beat out every hitbox, an invincible transformation, absurd reactions to anti-air and poke you out of every attempt to move in, and overtuned damage and defense, all without an assist character. If you defeat Extreme Nagoriyuki in a straight match, you will face Ultra Extreme Nagoriyuki, with even MORE damage and even MORE defense. This guide will hopefully help you beat them!

Since Nago’s DP now has full body invulnerability and he loves to use it during your stagger pressure (doing any move into gunflame as Sol is literally never safe, nor is f.S spam, or 6S frame traps, and if you’re unlucky with his AI he’ll actually hit you every time,), plus he will react to pretty much any attack/approach with a perfectly timed attack, actually engaging him is largely not recommended. Instead, what you should do is wait for him to come to you.

Eventually during his pressure, Nago will teleport into you to do something – he might try to throw you, or just hit you again. What worked for me was simply blocking until he teleported, then throwing him on reaction. You can simply repeat this fairly safely until he dies. It seems like the AI doesn’t really know what to do when you play passive, as a lot of his moves only come out on reaction to whatever you’re doing (though they are literally inhuman reactions.) I’ve seen him just kind of stand there a few times, not really knowing what to do. You can try your luck and hit him when you see this, but if he counterhits you it’ll be big ouchie time.

READ:  GUILTY GEAR -STRIVE- How to Use Ultimate Edition and Survival Mode Colors

Important: If you knock down Nago in the corner, make sure to backdash afterwards, otherwise the spacing on his teleport will be out of throw range and you’ll explode from a counter hit.

If you don’t want to throw cheese him and are struggling with his crossups, you can OS FD with a button! I personally hold P and K to FD, generally pressing the K just a bit earlier than P while still getting the FD, so if he crosses me up I’ll do 2K and follow up with a sweep, but if he lands in front of me I’ll just FD for a split second. If you have a button that’s easier to hit confirm I’d recommend using that, because I’ve definitely used a few bad sweeps trying to gatling off 2K when he doesn’t cross up.

There are only a few openings in Extreme Nago’s fight that you’ll be able to abuse to actually hit him with a combo, but only one of them is safe and is also character specific.

First, you can pretty easily get a counter hit combo right at the start of the fight if you’ve got a fast far reaching button such as Sol 6S. It’s extremely common for EX Nago to just do a f.S and get counter hit by one of these moves, but he’ll also teleport at round start as well, but thankfully Sol 6S seems to recover fast enough for you to block whatever he does next.

Second, if you don’t get hit by the blast from him going into blood rage, you can run up and meaty him for a combo, but he’ll sometimes block it, so meaty throw works most consistently – command throws are obviously better if you time the input right, but otherwise say goodbye to your health :(. Though if you want to just sit back, you won’t lose much, and I’d recommend it.

Me? I’ll still go for the wild throw 🙂

READ:  GUILTY GEAR -STRIVE- How to Remove the Bloom Bug Without Max Effects

The third big opening is when he does the blood rage super. If you block it and have a good, far reaching button that works well with dash momentum such as Sol f.S or 6S, you can get a proper punish even from fullscreen using FD! Though if you’re playing someone slower like Pot… Well, God help you. Maybe I’ll look at other characters for this fight and help y’all out some day.

For meter usage, depending on what character you’re playing as, your supers might be better or worse during this fight – I beat him with Sol, and using Tyrant Rave outside of a combo is pretty much impossible unless your reversal timing is perfect, and EX Nago will pretty much always teleport through the DI super or just murder you if you space it poorly. If you don’t have a good super to throw out in neutral, it might be good to use the meter instead to FD the chip damage Nago will be doing to you while you’re blocking until he teleports and you can throw him, though I didn’t struggle much without it either. I’d only suggest doing this if you’re actually about to time out, which never happened to me surprisingly considering how slow this strategy feels like it would be.

The other thing you can obviously do with your meter is RC. I’ve not personally tried RC in neutral very much, but using RC during a combo to get some more damage and maybe a wallbreak is always good, and you will still earn some meter during the positive bonus by throwing him even though you’re playing passively, which might give you more opportunities to hit him with a good super or play more aggressive if you’re feeling a lil’ risky. Don’t bother with YRC, it’s better to just let him hit your block and throw him when he teleports.

If you’re struggling to get a straight on EX Nago to reach the next fight, it doesn’t actually matter how many times you lose, just that the final win against him is a straight. So if you lose a round, just lose the match and retry until you get a straight victory.

The strategy actually doesn’t change much. Just throw him when he teleports into you. It’ll take a lot longer due to his increased defense though, leaving you more open to making little mistakes and eating 70% for it.

HOWEVER, the big difference is that, besides even MORE overtuned damage/defense modifiers, Nago now enters blood rage as soon as the round starts and it doesn’t end on its own. However 2 electric boogaloo, the blood guage goes down when you land hits on him, and when it empties he gets dizzied, leaving him completely open to your most damaging combo, which actually makes this fight somewhat EASIER. I’d suggest finding something that’ll get you a lot of damage and wall break, since you’ll actually be able to use the meter in a combo fairly reliably by throwing him until he’s dizzy.

Besides that, you can pretty consistently land a meaty hit on him after the round start blood rage in much the same way you can on regular EX Nago’s transformation.

That’s all we are sharing today in GUILTY GEAR -STRIVE- How to Defeat Ultra Extreme Nagoriyuki, if you have anything to add, please feel free to leave a comment below, you can also read the original article here,  all the credits goes to the original author Spuckky