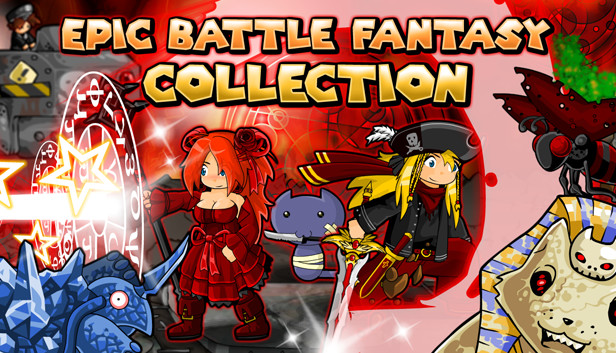 For Epic Battle Fantasy Collection players, this is a multi-purpose guide to help both achievement hunters and casual players. Contains a quick run-down for each game and toy aside from the prototypes.

Before playing any of the games, make sure to check out the “Medals” section so you know what to aim for in each game, since most medals also count as a Steam achievement. Most medals are not missable, aside from maybe requiring another playthrough; the only medal that you can mess up is the “3 Hearts” medal for Bullet Heaven, so do not buy any health upgrades until you acquire that one.

Also, several of the games require you committing to sitting down and playing them for awhile to get everything in one sitting; they lack save points! The newer ones do allow you to save and quit, though.

The majority of the medals involve copying a design from one of Matt’s other games in this collection or putting specific pieces in specific places. You can screenshot the mechs in question in each game and have it open in a separate window to use as a guide.

I will edit this guide later to include screenshots of which parts you need and where to place them, but most of them are easy enough to figure out just by reading the hints in the medal descriptions.

As a bit of trivia, this was the first game of Matt’s I played on Newgrounds way back at its release.

Matt gave it a shiny new coat of paint and actually increased the difficulty by randomizing the time that you must press spacebar.

The key point is to relax your mind but keep your finger tensed and ready to press; you can get up to two free strikes by going too early, but try not to let those build up. The last two fights are far more strict than all that came before, with the final bout requiring pretty much a frame-perfect reaction.

The “Masochist” medal is time consuming, but I found it easiest to go all the way to the last enemy and lose then roll back one, rather than losing to an enemy on purpose, beating them, losing to the next, and so on; fatigue builds up with this game, so you might find it harder to actually reach the later enemies if you spent a lot of time playing around with the earlier ones.

Make sure to do at least a couple of rounds in PvP for the different animations there, as well.

There is not much to say about this one; just shoot the targets you are asked to aim at. Relax and use an auto-clicker to save on finger strain.

The game is easy enough unless you are hunting for the medal for completing it on Epic difficulty. On that difficulty, you basically need to follow a flow chart for some of the bosses.

Most of the items are actually pretty useless; Natz can fulfill the purpose of Potions, High Potions, and Bombs. Max Ethers will be your workhorses to keep her topped up in boss fights, with a few Water Of Life bottles in case she goes down before Matt. The mech bosses also take a fair amount of damage from Bombs, if you happen to get any as fight rewards.

Antidotes are good since Matt can use them instead of making Natz cast Purify; on that note, Purify can be cast while Natz is Sealed, and Sealed will fade after about 3 turns. Poison sticks around until cured, though, and its damage can vary from as low as 100 to just over 3K.

Keep Protect and Barrier up above their halfway point at all times during boss fights, especially the mechs and Go- er, Roku. They like to spam their magical damage nukes while at low HP, so sometimes it becomes a damage-per-turn race to burst them down before your supplies run out.

Stone Edge is Matt’s workhorse blade, since it offers way more bonus stats than it drops, and all it drops is his already lackluster magic damage. You will only ever want to swap to Devil’s Sunrise to refill mana (over 400MP per basic attack!) or Heaven’s Gate to deal heavy damage to the last set of enemies and the final boss.

Natz can drop an enemy’s physical defense for Matt and her Cant- er, TV Boy summon. It is almost never worth it to have Matt drop an enemy’s magic defense with Screamer, since Natz will usually be spending her turn casting Heal More to keep both players above 6K HP during boss fights.

Characters keep stat buffs after dying and being revived, but lose negative status effects. If Matt revives Natz with a Water Of Life, then she can still take her turn; if she revives Matt via her spell or an item, then his turn is skipped.

You will need to let the final boss wipe the party at least once with Spirit Bomb for a medal, but that is easy; just do not Defend and it will take both characters right out even with a freshly cast Barrier. The final boss also gets a free turn after a Spirit Bomb lands.

A lot of the tips from the prior section still apply. Keep your defensive buffs up, use a defensive blade, and let Natz handle support.

New to this game are perks, which are semi-randomly offered at the end of waves based on tactics and weapons you used. Matt can unlock Mana Leech for all his weapons by repeatedly basic attacking with Rune Blade, and he can get free between-turn Airstrikes and a better Airstrike by repeatedly casting it. Natz can get a much more pitiful Mana Leech via basic attacks, and free Slime Bunny summons and more Slime Bunny healing via summoning it a lot in one wave. All these perks together will add up to a lot of free sustain, self-healing, and free damage from between-turn Airstrikes.

Some bosses have breakable parts that you need to burst down to remove their more powerful attacks. It is usually pretty obvious which ones you want to break first.

Poison can do a lot on organic enemies, even ones that are themselves poisonous.

The extending attack is your best friend in the coin minigames; the basic attack is a great way to get yourself hurt, though, and the jumping attack makes your mid-air control awkward.

Find a character you like the feel of and stick with them. All of them are viable in their own way.

Avoid upgrading your health until you get the medal for beating most of the levels.

Pattern recognition and reaction allows you to beat most bosses without any upgrades, but they certainly speed up the process.

Section to be written after I actually finish this; it is the only title of Matt’s I never finished.

It says a lot when the creator admits they do not like their own game.

There is not much to this one, since it was a mobile game. Fling the correct orders at the correct cats. Grind forever. Repeat. Die unfulfilled.

That’s all we are sharing today in Epic Battle Fantasy Collection Tips for Each Game, if you have anything to add, please feel free to leave a comment below, you can also read the original article here, all the credits goes to the original author Null Winter