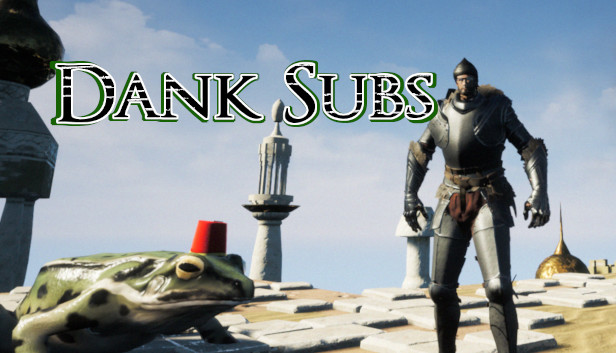 For new players of Dank Subs, this is a complete walkthrough guide for beginners to have a better gaming experience.

The general idea is to kill things, get subs, unlock the gate and meet Bernie! Word of warning, you can’t seem to turn the camera without holding a mouse button. I advise adjusting to using MMB (middle mouse/scroll wheel click) so you don’t attack whilst you aim. This guide was based on a single session of multiplayer find Bernie.

Run down the hill and grab a sword and shield. You may need to do this a few times as you adjust to the jank mechanics.

Kill the pigs for practice but don’t bother with the “bonfire” boxes, they just respawn enemies and you won’t need the healing really

Head all the way around to the two spinning fez hats. Jump onto the first one, use middle mouse button to reaim the camera towards the second Fez, and just walk onto it as it gets nearby. Then lastly reaim and jump onto the next green platform.

Snake your way to the circular arena with the two White Nationalist Giant’s. Lure them both down the path behind them and try to get one of them stuck. Then, lure one back to the arena and lock onto it with tab. Do the old Dark Souls bob and weave, getting in a quick left click hit on their back when it’s safe. Once dead, if you managed to get one of them stuck you can ignore it, if not you’ll need to kill both.

Now, providing you don’t die after killing one of the giants you’ll have 100 subs for each one. Walk to towards the weird trellis/gate like thing, interact with the red switch to open it, go around the corner and run into Bernie

That’s all we are sharing today in Dank Subs Complete Walkthrough Guide, if you have anything to add, please feel free to leave a comment below, you can also read the original article here, all the credits goes to the original author Brightg