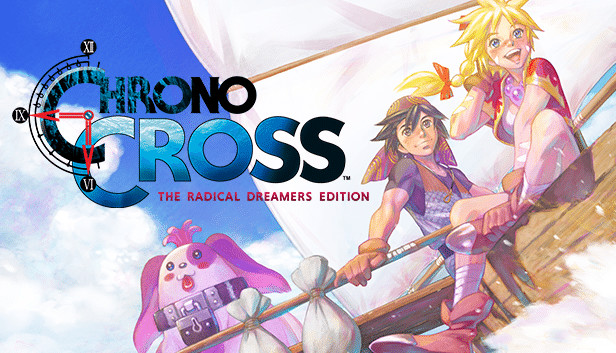 For new players of Chrono Crosses, if you’re struggling to make sense of the combat system, this guide will help you out.

In Chrono Cross, there is no individual turn order for your characters. Instead, your team acts between the enemies actions as a group – you can switch between members at any time you could attack by pressing the right or left keys, so long as the person you’re switching to has stamina.

If we knew a Komodo Dragon gets its turn after your group has performed five actions worth of moves, you could therefore do any of these before it gets its “turn”.

Ect, but you could also do something like this:

Now the last attack pushes you a little over the five limit, getting in more damage before the pup can attack!

If the Pup survives, it will attack after the fierce just as normal, but making your last attack your biggest one is a good way to eliminate single enemies without taking damage!

This Komodo Dragon Pup will attack in five more units of time! 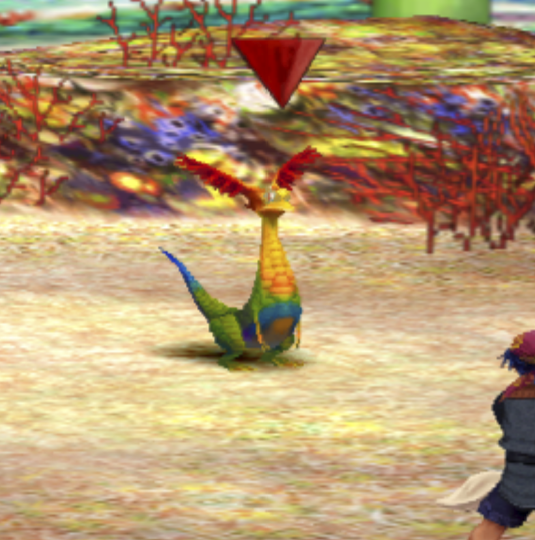 But theres nothing to indicate this…you just have to get used to the enemy rhythm.

Stamina is a renewable resource that typically starts at the maximum value of “7.0” and depletes from this limit with most action use. Stamina value can go into the negative, and if it does, that character is unable to take actions until it has at least positive stamina again. If everyones stamina is exhausted and in the negative range, time will automatically progress until the enemy can attack, if you still don’t have anyone with positive stamina, time will continue until you do. Elements and Techs use 7.0 Stamina, so your character will always need to recover after their use.

Each character has a stamina recovery stat, and that is the rate characters recover their stamina gauge for each measure of time that passes while they aren’t attacking. Unlike most other stats, their stamina recovery is set from the start of the game unless they wear certain accessories. It never increases after battle. Higher numbers simply represent “quick” characters. Heres a list of which characters recover at what rates:

—-
Example: If you have a party of Serge, Kid and Guile, and Serge expends stamina to do a “weak” attack, one unit of time will pass. The other teammates who weren’t involved with the attack will recover stamina based on their stamina rate. Thus, by the end of Serges action, Kid gains 1.2 stamina, and Guile gains 0.8

When looking in your status, sometimes the game makes you do math, you can find the stamina you recover by dividing “Stamina Recovery” here by 10 to get a fraction

Stamina Rings and Belts increase stamina. If you know you might get in a long battle I recommend using the character with the highest stamina recovery first, and have them use an Element. They can set the Field Effect to the color of your choice and get quickly back into the fight

If you’re out of stamina, you automatically go to the next person with stamina. If you defend with everyone, I believe the game will pass 1 unit of time forcing you to select the next character.

Heres some additional information you might find useful. Landing normal physical attacks consecutively without an interruption grants a hit % bonus, you don’t gain any hit % for missing. 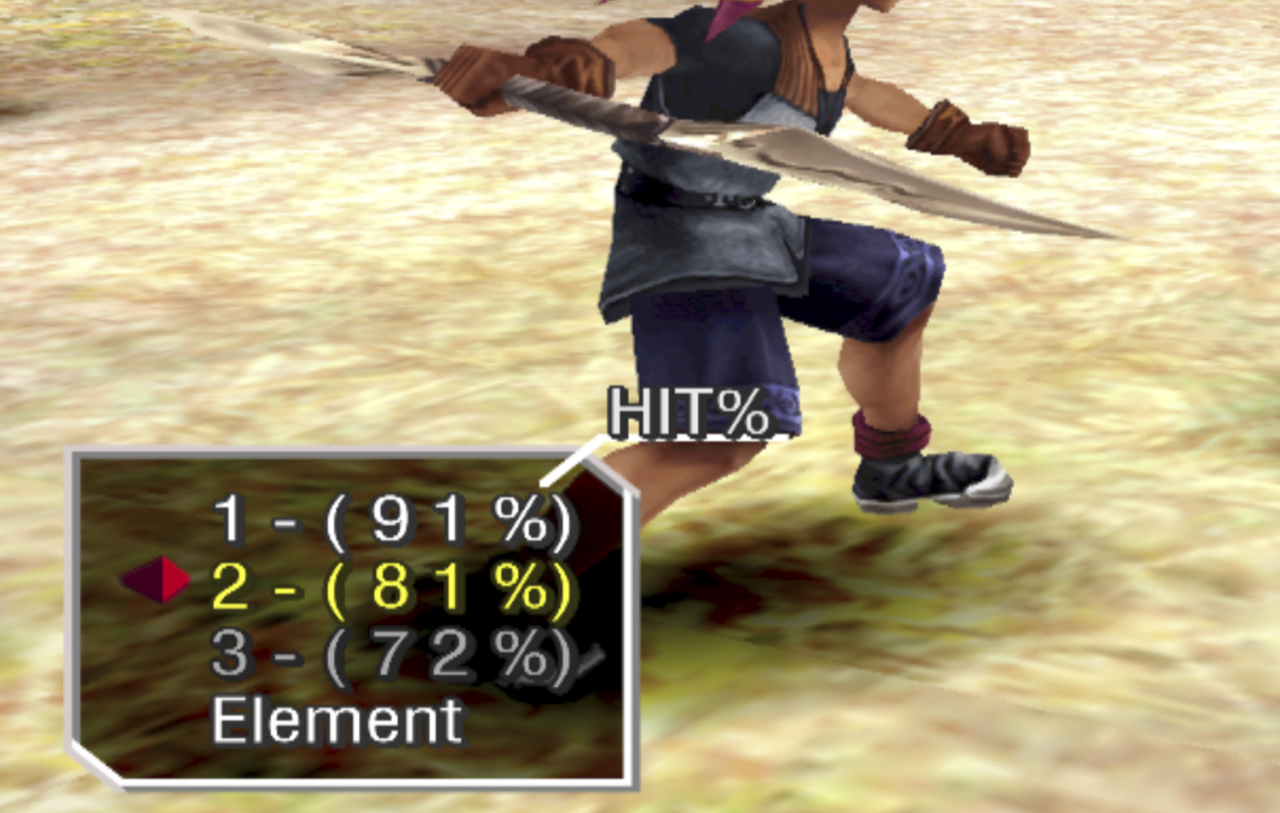 The last thing successfully hitting your opponent does is give you grid levels, which you can think of as the “MP” resource in other games to cast the “Elements” magic system in this game. You don’t gain any levels if you miss, landing a Weak attack gives 1 grid level, Strong gives 2 grid levels, and Fierce gives 3.
—- 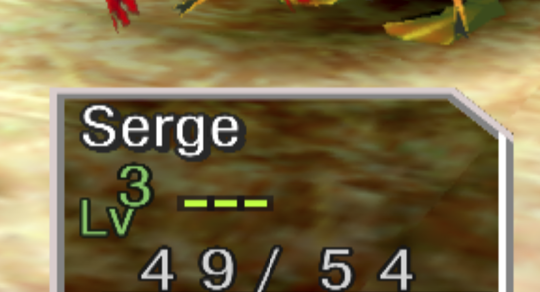 A low level Serge, all 3 element bars/columns he has are lit up, a numerical “Lv” value to the left confirms the maximum level he can cast.

Before you can use an Element, you must have it equipped.

From the menu, go to Elements > Allocate > Select the character you want to change up
READ:  CHRONO CROSS How to Farm Shiny Material Easily 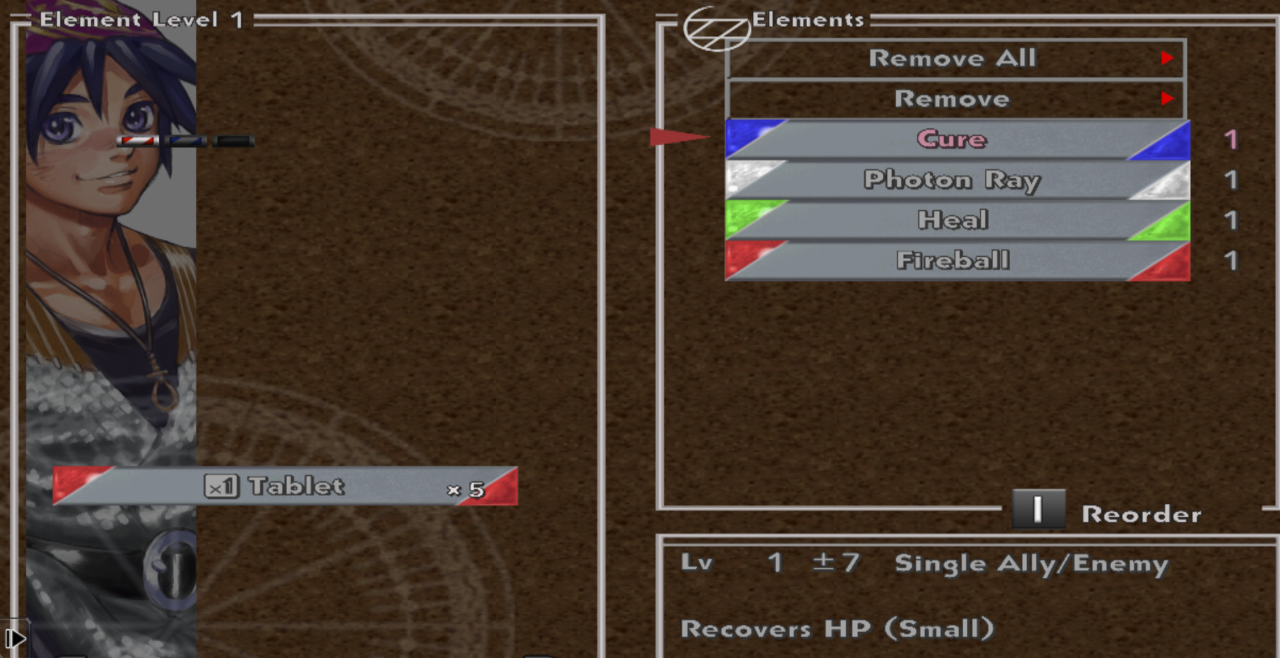 The grid is on the left, this is the magic spells you prepare for and can use in battle. The right is basically the selection you can move over.

The Grid is small at first, it grows in a fixed pattern for each character based on the groups ★ level. (you may of seen it after a battle, more on that later). Each level can contain a column of Element spells. If your grid is “charged” at level 5, and you spend a level 2 grid spell, you’ll go down to grid level 3.

You may note that putting an element in a grid may produce plus or minus followed by a number after it, like “Fireball +1” or “Ultra Nova -1”. Each Element has a base level. Putting it in higher or lower level columns will increase or decrease the power and effect of that Element by 25% (that’s also why the game prevents things like -4 elements…because that would be 0 )

As a rule of thumb: A higher base means a better element. That Fireball +6 just isn’t that threatening compared to that inferno -1. In the case of the base level being the same, things that single target tend to do slightly more base damage on that single target, but most people value something that can hit more enemies at once, which will total more damage with multiple enemies hopefully wipe them out altogether.

Most everyone understands that this game has a rock beats paper elemental system, every enemy and player character has their “innate color”. The general idea is that a color hurts its opposite, and using an element against a user of the same color is not as effective. More on that in a bit.

Your “Innate Color” is both the color you defend with, and the default color of all your weak/strong/fierce attacks. So if you see an enemy with a Blue color, you either want to have a red character, like Kid or Zappa – run up and smack it physically, or have any of your party members use a red Element.

But this is probably stuff you already know about!

Let’s start learning about the Field Effect system. Whenever you start a fight, 3 colors will appear representative of the location you’re fighting in. Like a kaleidoscope, every time an element is used, the color of that element will appear in the inner ring, pushing the outer color out.

In this picture, yellow is the inner color, blue is the outer color. If I used another Element or tech, blue would disappear, pushing green and yellow a step toward the outer edge to make way for the new color.

This game revolves around a point system based on the colors of the attacker and defender and the Field Effect. Each point is worth 12.5% extra damage on your attack, the attack can be penalized should you end up with points in the negative.

For the basic weak/strong/fierce attacks it works like this:

For the Tech and Elements, the point system is slightly altered:

This result is multiplied by a further 1.5 if the attack is the opposite color of the defender.

To summarize, you want to hit the enemy with the color they’re weak against, while also filling up the field with elements you like to use, while trying to avoid letting the enemy turn the field to their color.

—–
Side notes:
Innate Color locks some Elements from use. Some Elements are can’t be allocated unless the user is the same specific Innate Color as that Element. This makes Pip who changes Innate Colors a really powerful character if you build him right.
Summon Elements, represented by having a ★ in their name, are not only Innate Color locked, but require you to flood the Field Effect with their color to be used. They also consume a ★ from your ★ Level as well, but unless you are incredibly negligent user of summons, you will never run out of stars in this game, because simply going to an Inn or bed recovers ★ level to full.

That’s all we are sharing today in CHRONO CROSS: THE RADICAL DREAMERS EDITION Battle System Guide, if you have anything to add, please feel free to leave a comment below, you can also read the original article here, all the credits goes to the original author frowningmirror