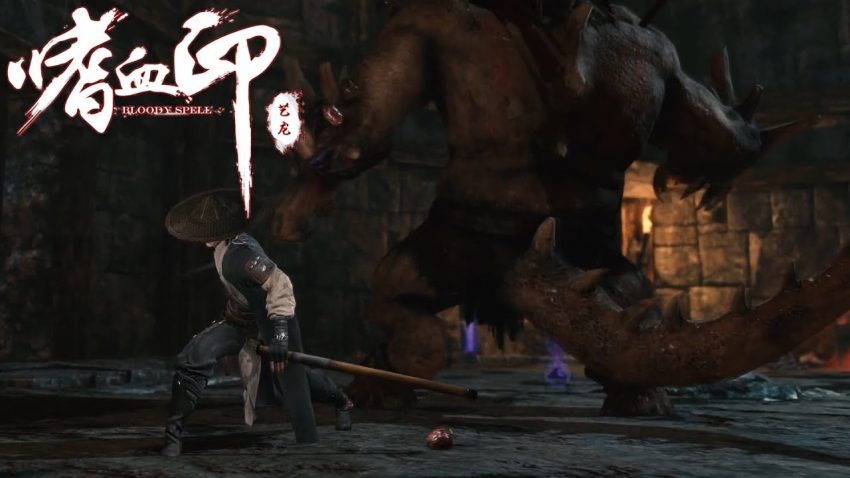 Don’t forget the thumbs up. Creating this took a lot of effort!

If you just downloaded the game and start it up for the first time you’ll notice one of two possible things:

To change the game’s language from Chinese to English, navigate to the third option (游戏设置) in the main menu and then select the first option on the following screen (设置)… 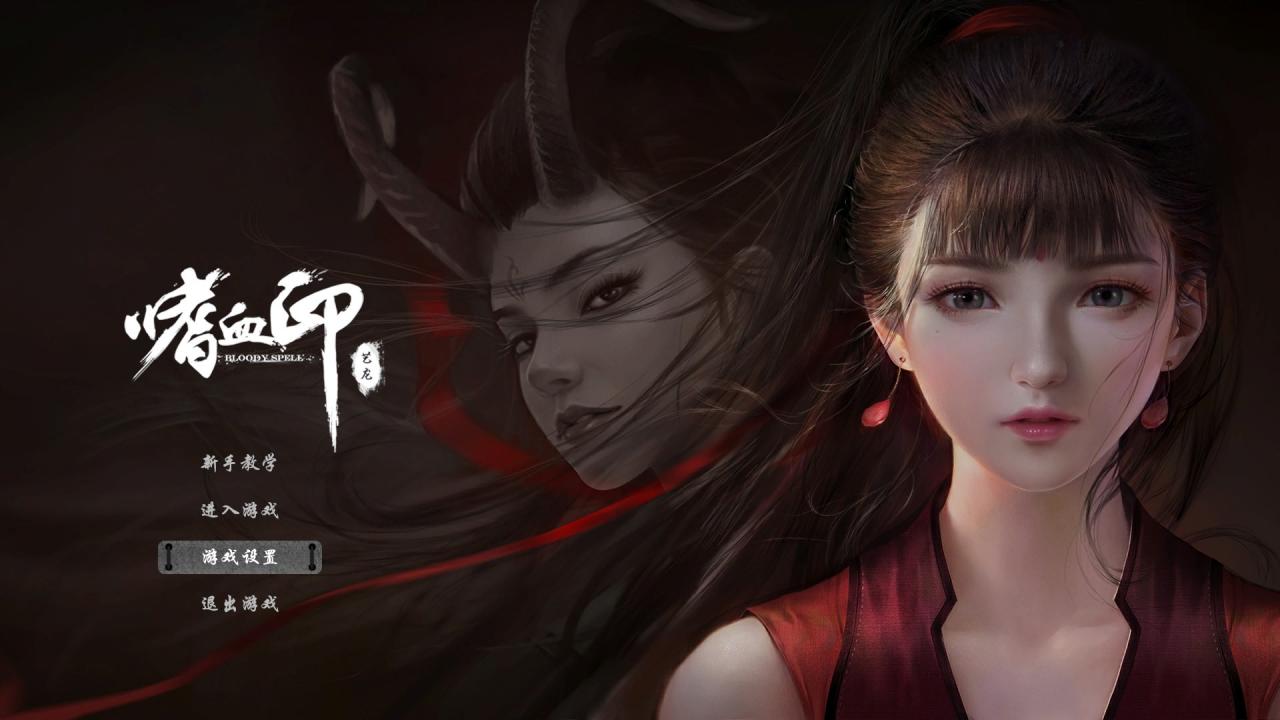 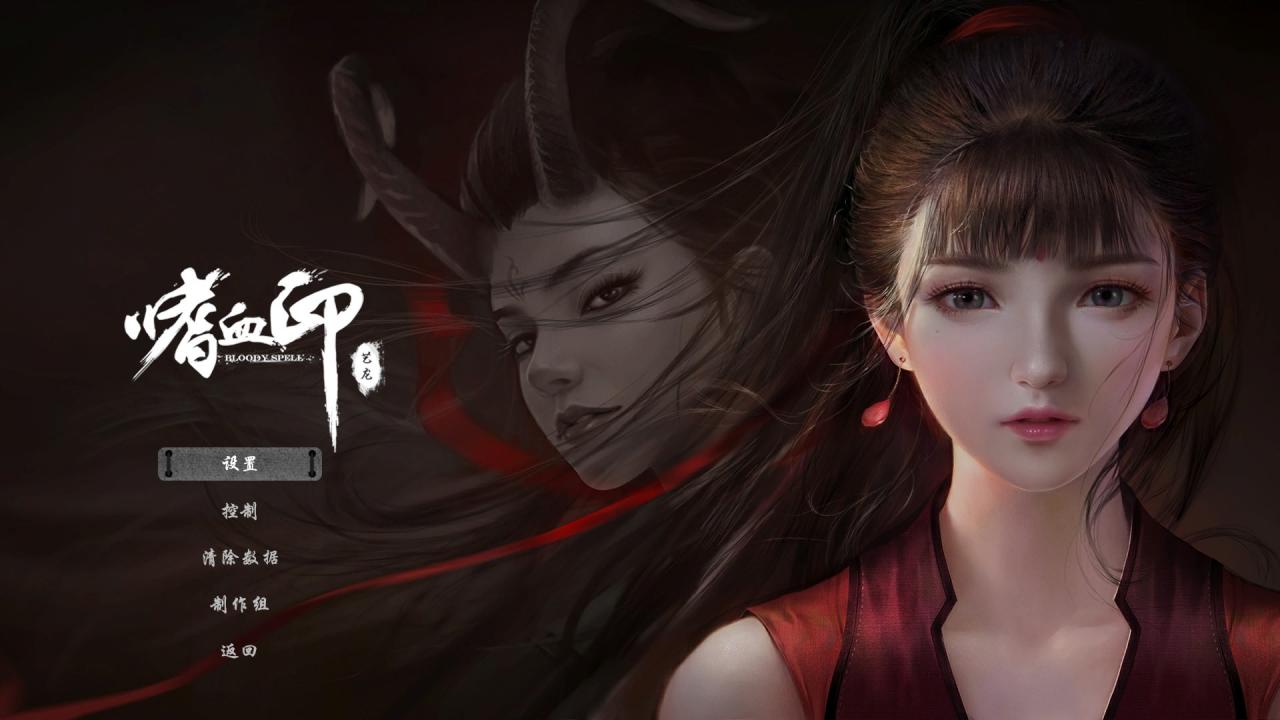 … then change the first value (语言) to “English” and confirm your changes using the left button at the bottom of the screen (保存)! 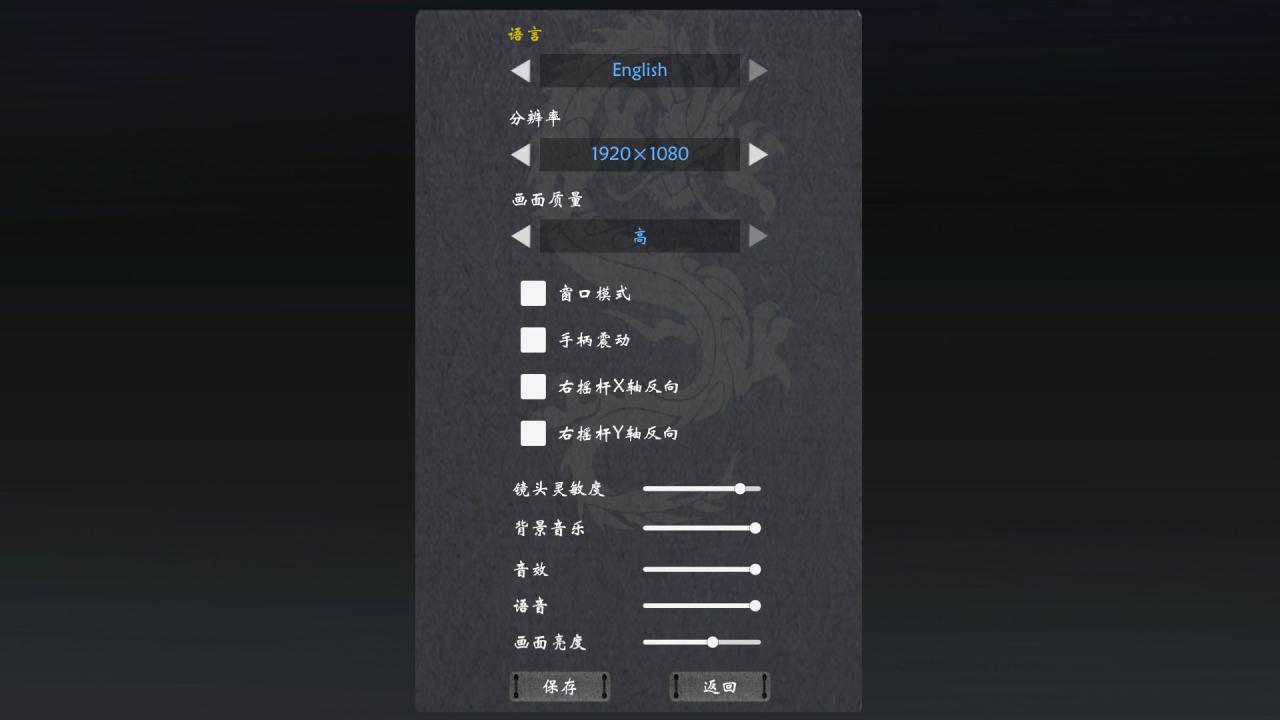 Disclaimer
If this helps you, be sure to give FullMetalPanic’s Guide a thumbs up, since that helped me get started:

A short guide to switching the games text from Chinese to English.

Yes, this is a “Souls-like” and yes, the game is never really paused but luckily for you, the enemies don’t know that. Next time you start a battle realizing you equipped the wrong weapon, just hit [Esc] / [Start] and change it. The enemies will either stand still or circle you without getting closer or attacking.

Learning from the tutorial

It may sound obvious but the Tutorial is a great place to start, as it introduces you to (almost) every mechanic you’ll need throughout the game. Basic combat, Light and Heavy attacks, Jumping, Ranged combat and Stealth Kills. Complete the Tutorial and you’ll know pretty much anything you need.

The only thing the Tutorial doesn’t explain is the Hook. The Hook lets you grab on to purple hook points in the world, which gets tutorialized in the main game whenever you discover those points. 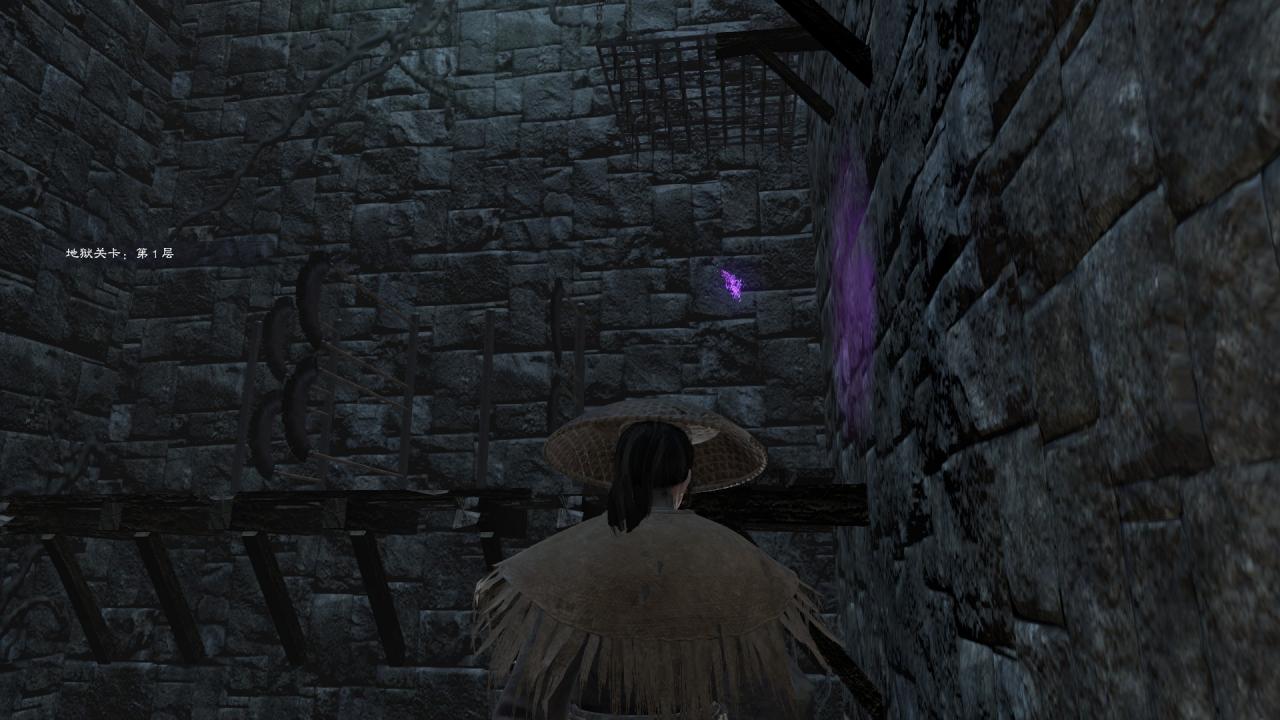 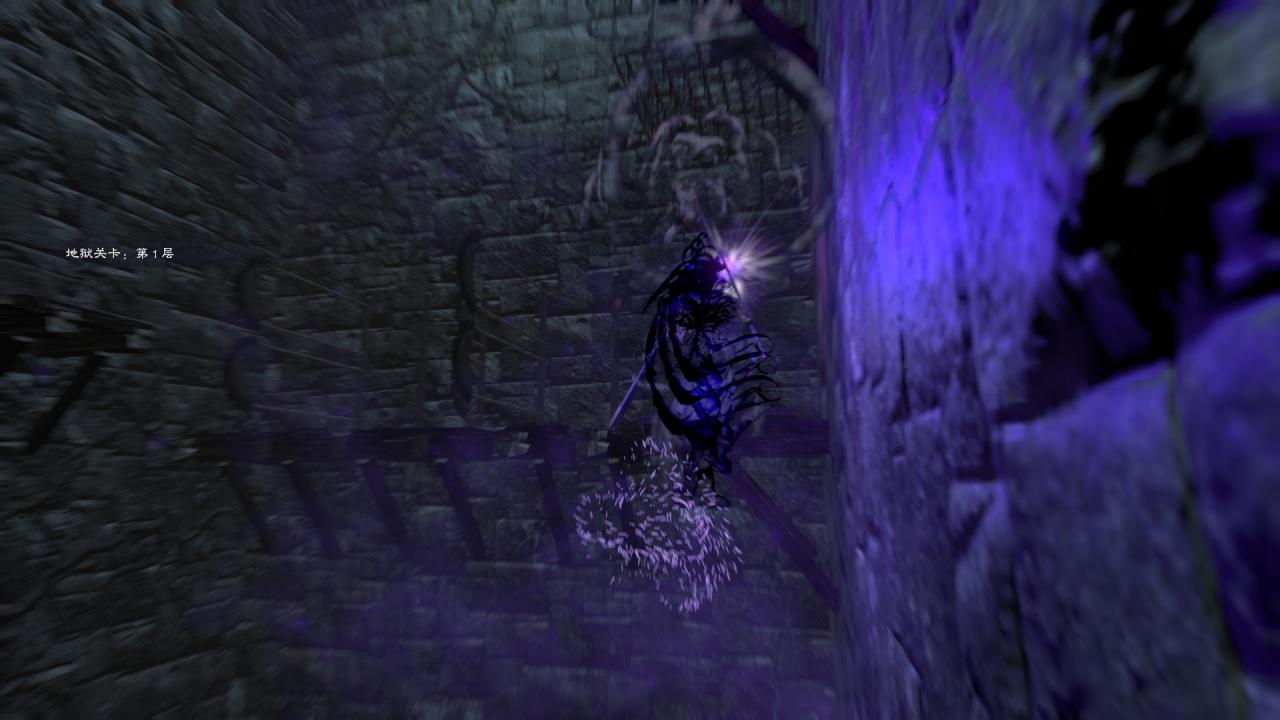 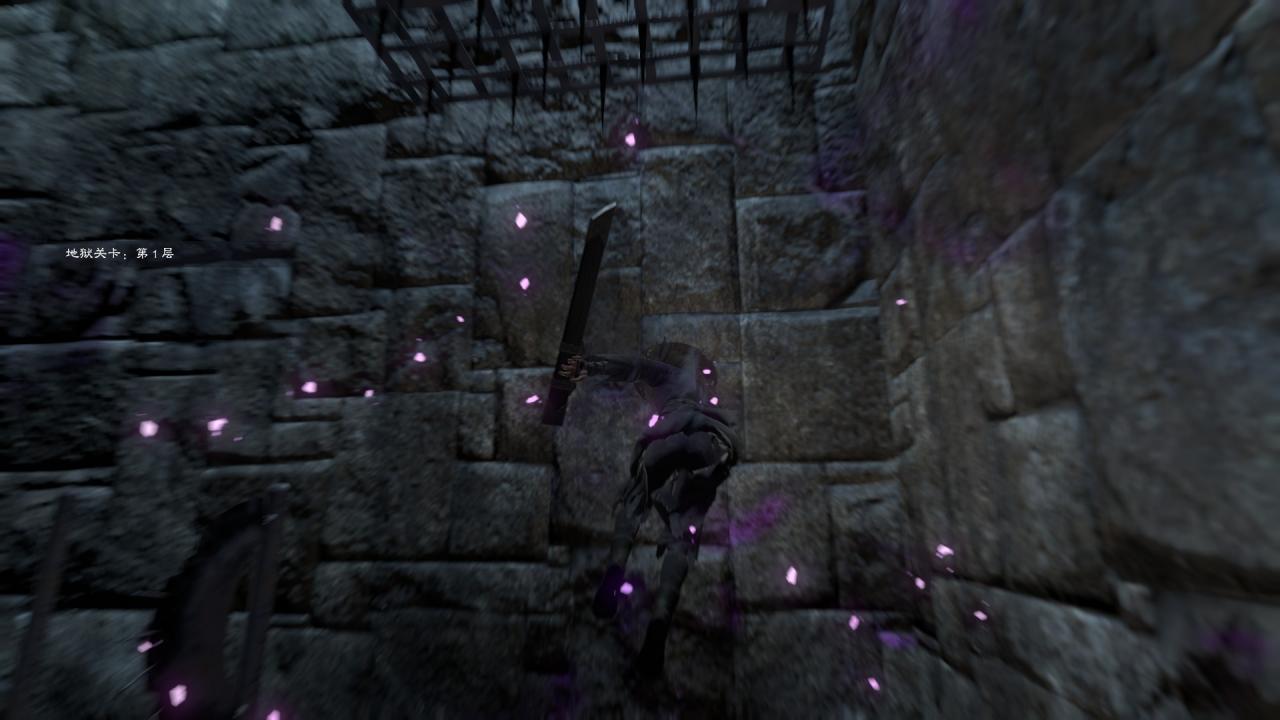 However, the mechanic that doesn’t get explained is that you can use the Hook against enemies to quickly get close to them. Just lock on (default [Middle Mouse] / [R3]) and hit the Hook Button (default [C] / [RB]) and you’ll zip towards them. Note that you’re suspended in the air briefly after getting to them, so your next immediate attack will be airborne.

Upon pushing the designated Dodge button, you will find that the dodge in this game is a short-distance dash similar to that in Darksiders III. 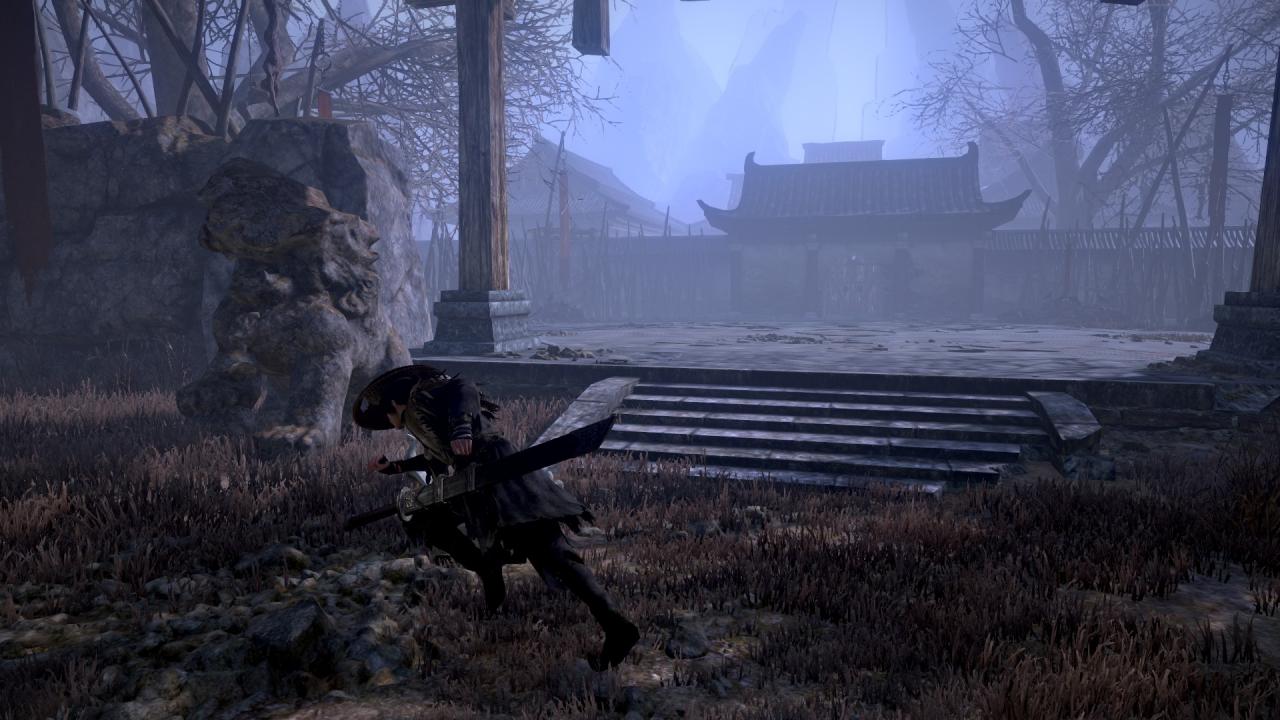 If you want to perform a rolling dodge with a higher reach instead, just double tap the button. 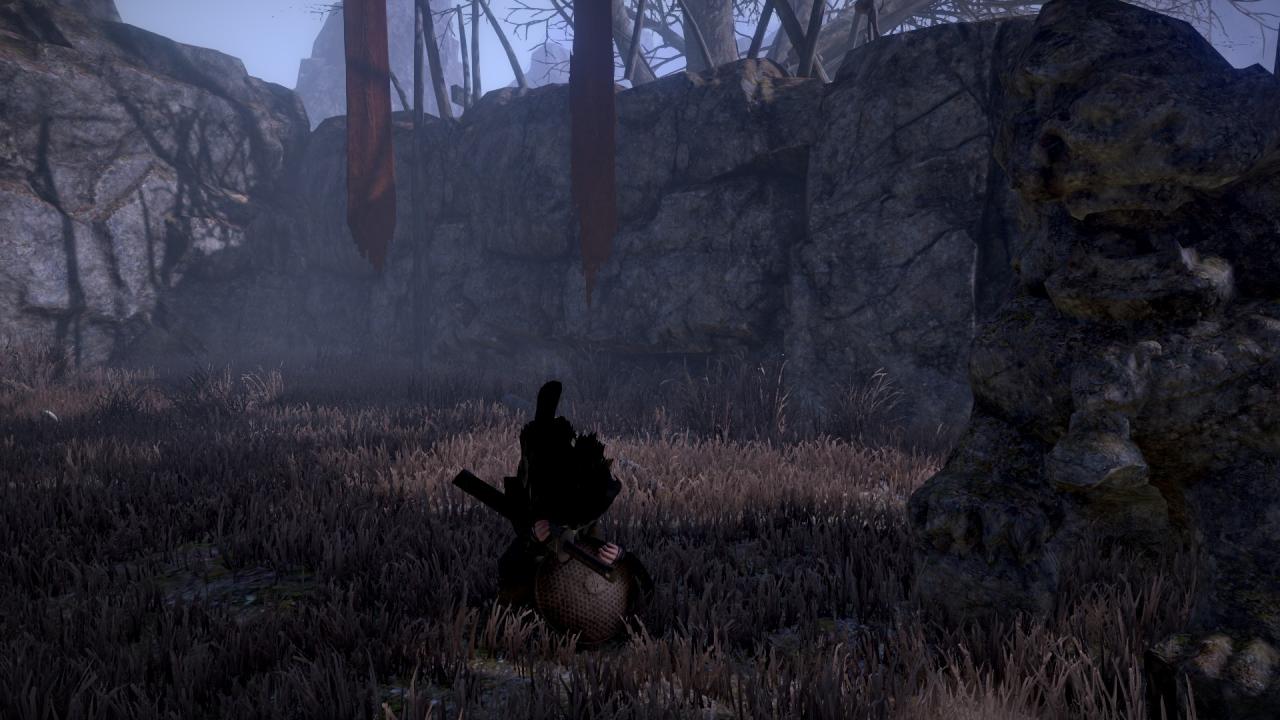 When items drop from chests, enemies, destructables or corpses, don’t worry about picking them all up. They will stay on the floor shortly and then automatically float towards you – and they’ll find you anywhere… 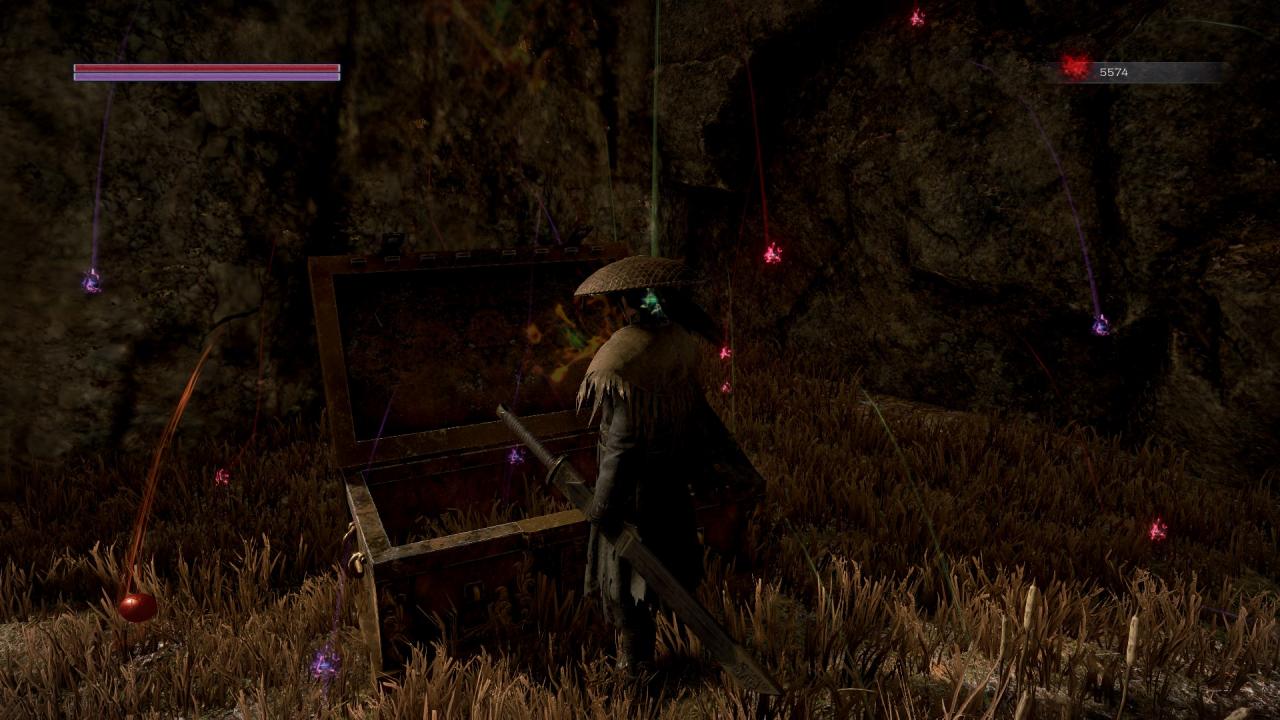 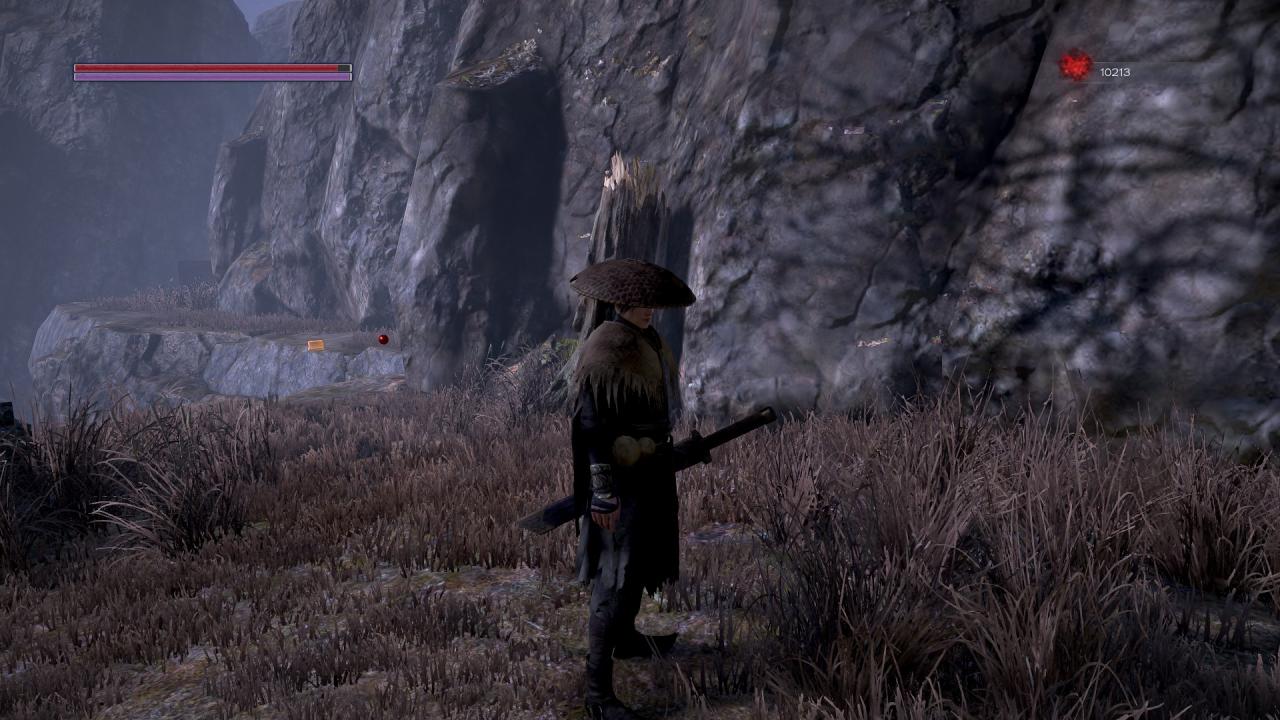 Only objects that had already been in the world before you arrived (weapons, Corn, Iron Ore etc.) must be picked up manually. 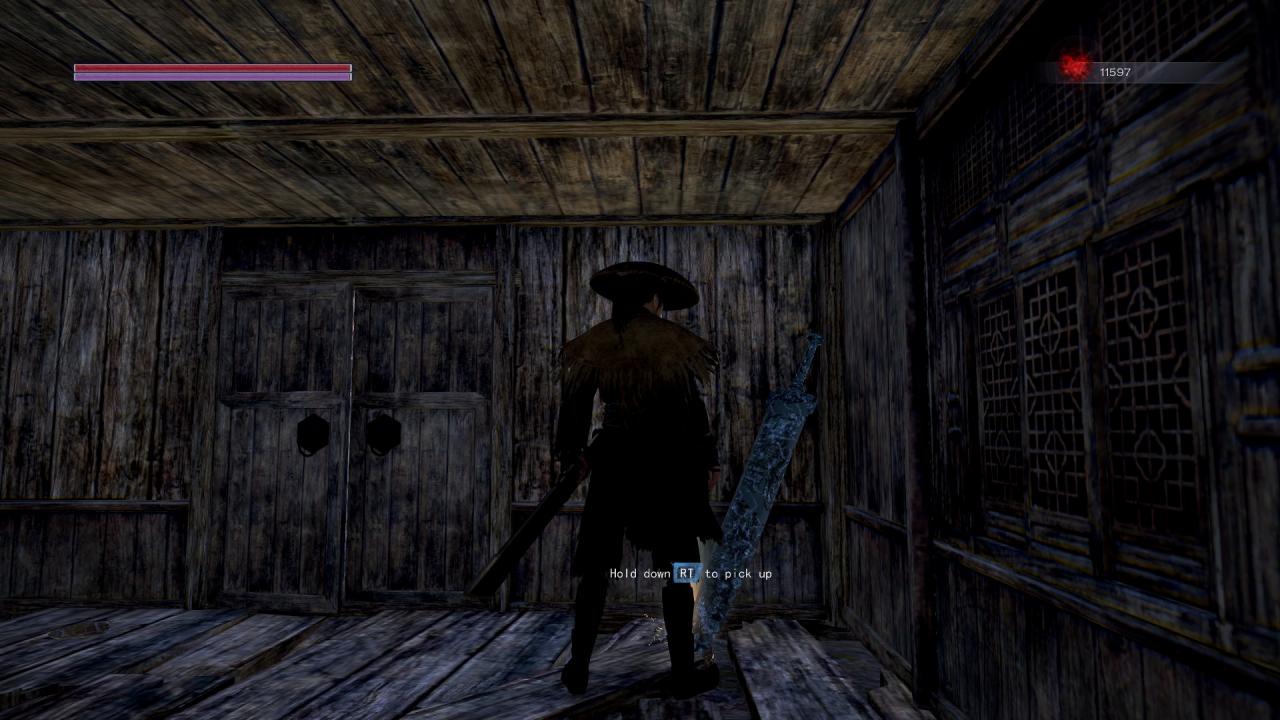 In order to unlock these, you’ll need to find the corresponding Blood Ambers and then spend them in exchange for the skill. This is the same for both Passive and Active skills. 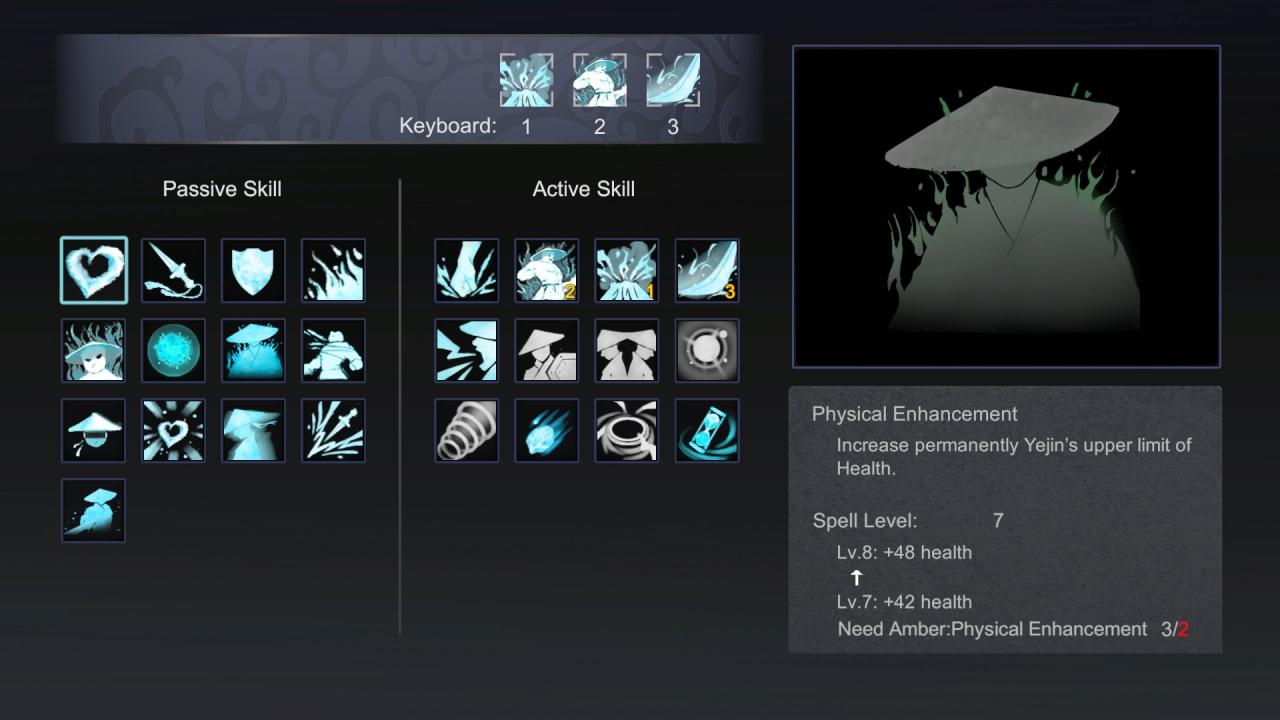 Most skills can be upgraded several times. In order to do so, you’ll need the same Blood Ambersagain, however the needed amount may increase.

Don’t forget to assign up to three Active skills in the three slots at the top of the screen or you won’t be able to use them. 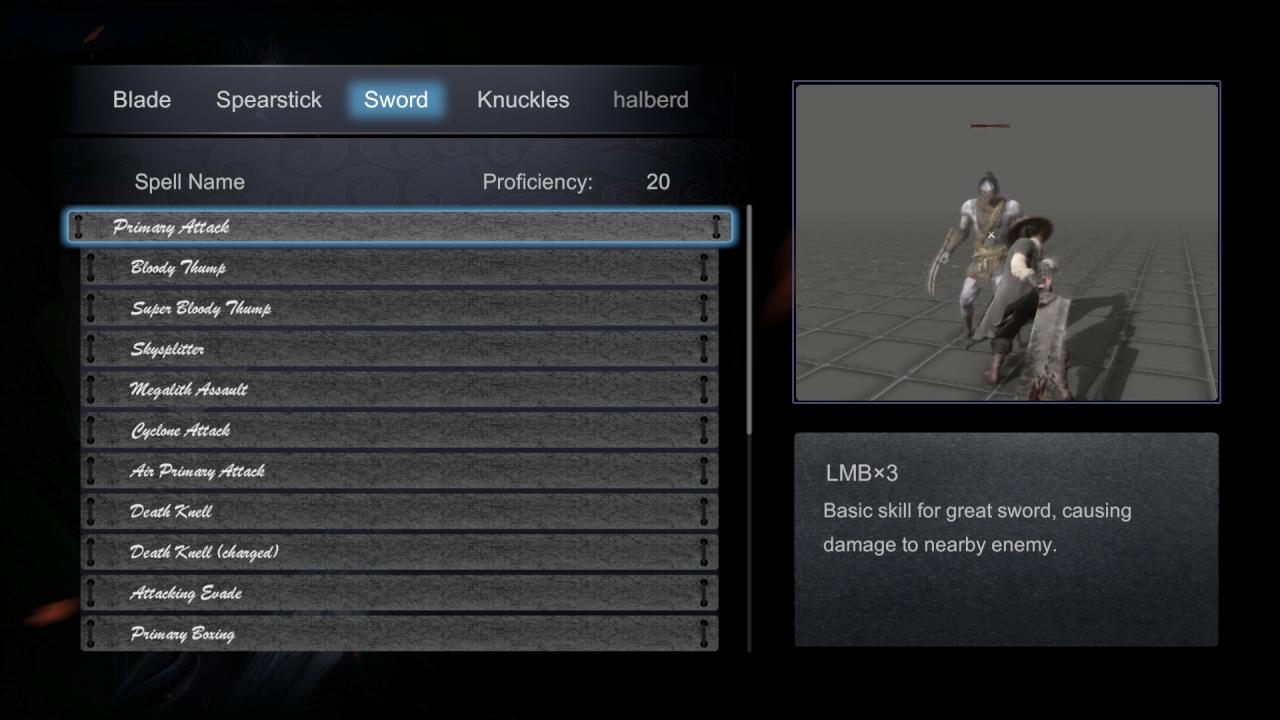 What happens when you die

This game is considered to be in the »Souls-like« genre and while it bears some similarities, it differs significantly from its peers when you die.

Unlike in games like Dark Souls, Bloodborne or Nioh, you’ll lose everything except your currently equipped gear and all accessoires upon your death – no chance to reclaim your Blood (currency) and no chance to keep any item.

What you lose
What you keep
READ:  Bloody Spell How to Get Inflatable Weapons

You’ll be at the very start of the level again, the layout of the level will be randomized again and you’ll have lost almost everything.

If you’ve played DarkSouls and/or Bloodborne and/or Nioh and/or Darksiders III before, then you’ll probably know this but destroying wooden crates, skeletons, tree roots, furniture etc., will always grant you a small amount of currency. Additionally, like in all of the games above, you can destroy said objects simply be dodging through them. This keeps up your momentum and makes farming them a bit less tedious. 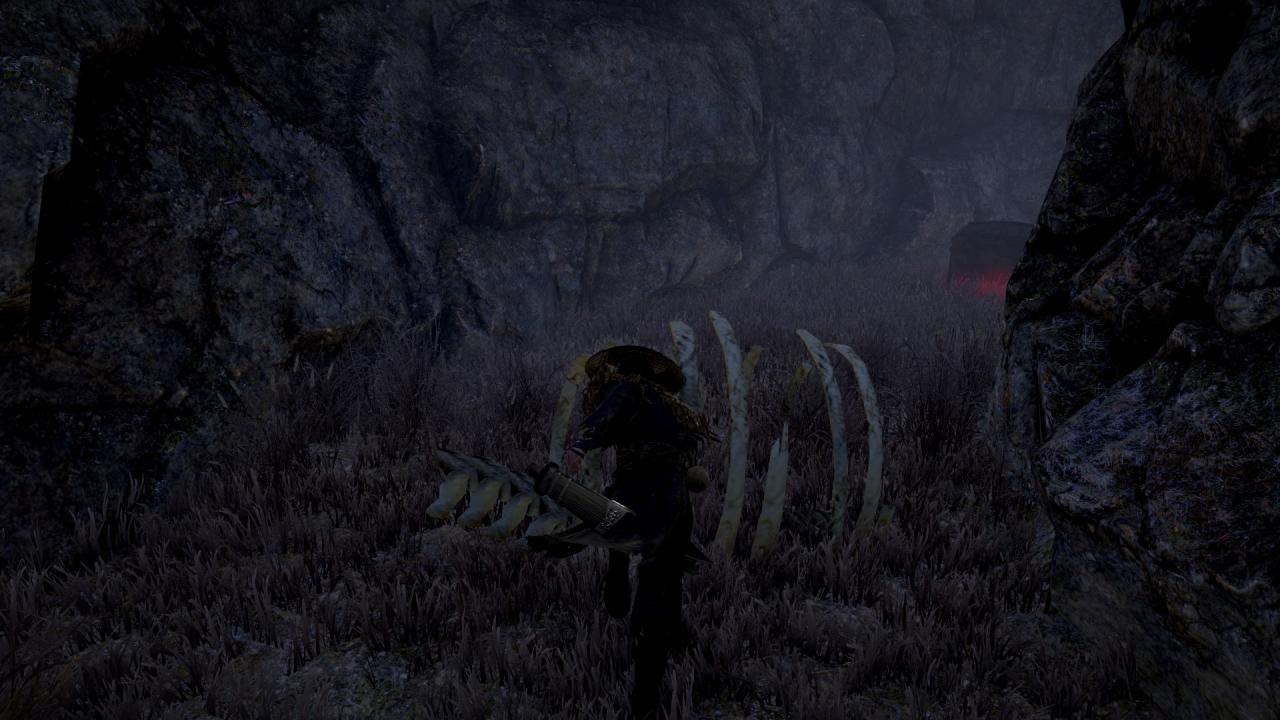 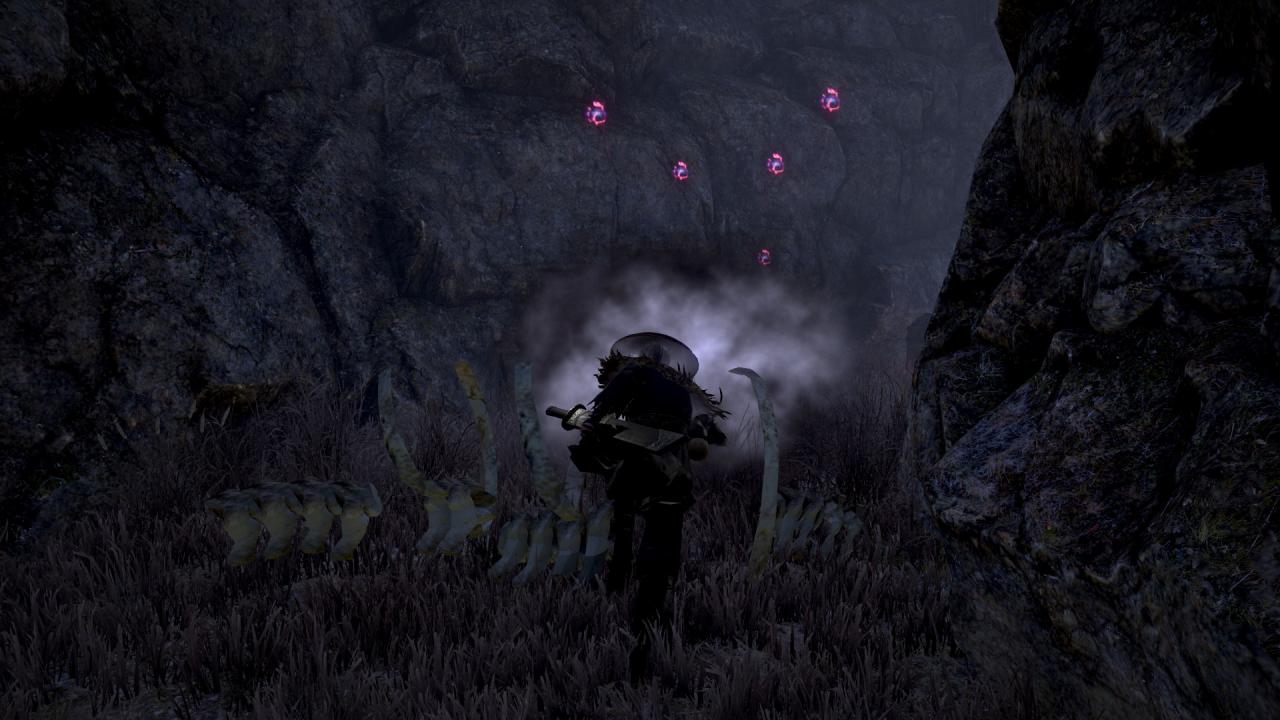 Additionally, chests and monsters also grant you currency. Chests you should avoid if you are at full Health or Bloodthirst are those that glow green or purple respectively. Those chests do not drop any currency and will be wasted if you open them without needing their contents. 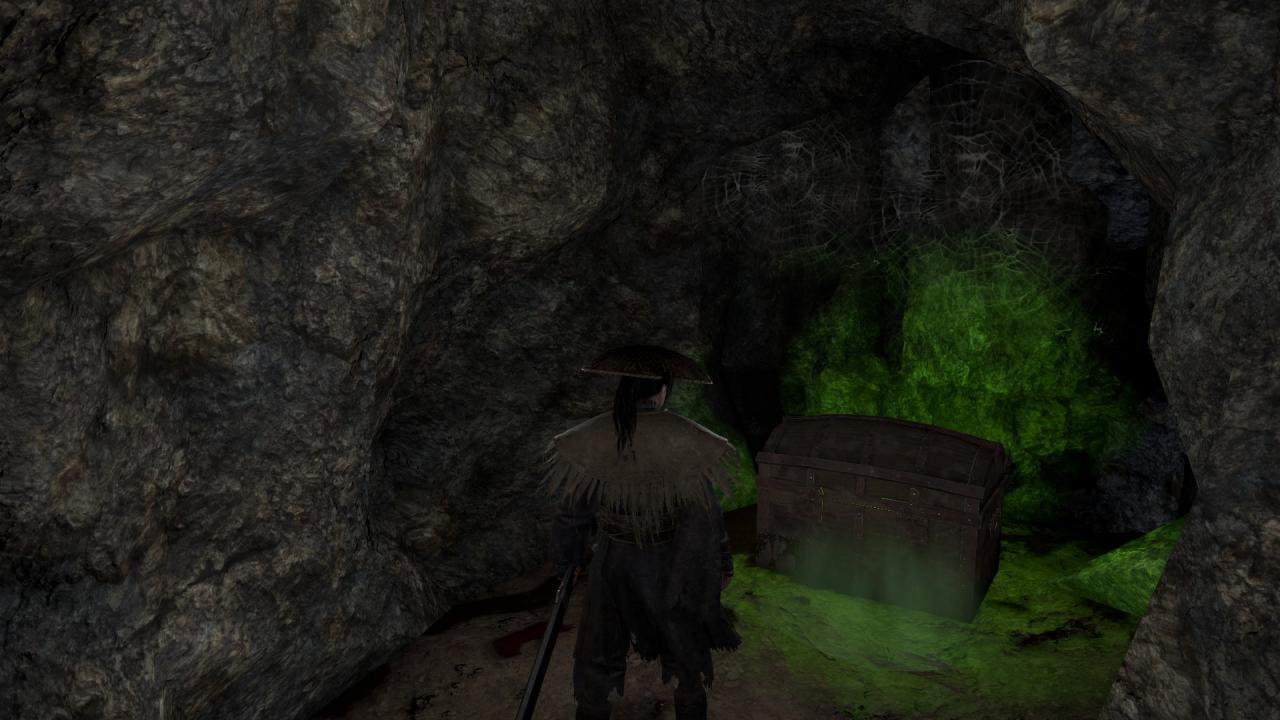 Lastly, there are some skills (for example Counterattack) that cannot be upgraded beyond level 1. Additionally, skills like Defense Enhancement are capped at level 10. Make sure to always sell Blood Ambers you can’t use anymore.
Cranking it up to 11!

If you’re looking for a somewhat more exploitative method of farming lots and lots of currency (among other things), do check out my other guide:

The easiest and fastest way to farm Blood, so far…

On your journeys you will come across mystical constructs, some shaped like obelisks and emitting a blueish glow when you approach them and others like metal spiky columns holding an orb that glows in a deep purple.

These beautiful phallic symbols are basically your shops. Here you can spend Blood (currency) to buy Blood Ambers or Equipment. For me, personally, most of the Equipment here is not worth it – It’s the Blood Ambers I keep coming back for. Due to the localization, it appears as though, you need to spend both Blood and something called “Skill Books” to get a Blood Amber but what it really tells you is how many Blood Ambers you need to learn/improve said skill in your Skill Book (this confused me big time at first). 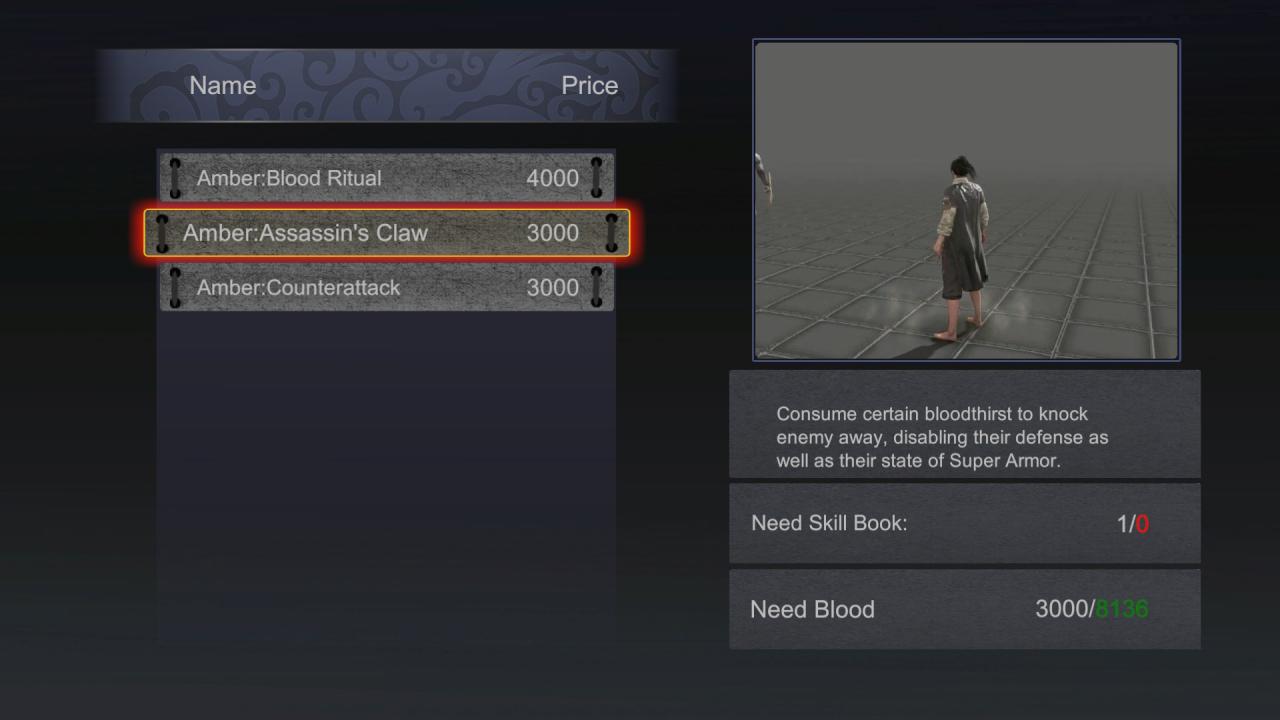 In other words, as long as you have the Blood, you can get the Ambers and you’ll even see how many you need to use them. In the example screenshot above, we can buy the “Assassin’s Claw” Amber and instantly unlock/upgrade the Assassin’s Claw skill.

Just don’t.
Seriously, you lose one level of a randomly picked Active skill (and the whole skill if it was at level 1) for a small boost in strength. Considering that some skills/levels take multiple Ambers to upgrade, the trade-off just isn’t worth it in my eyes. 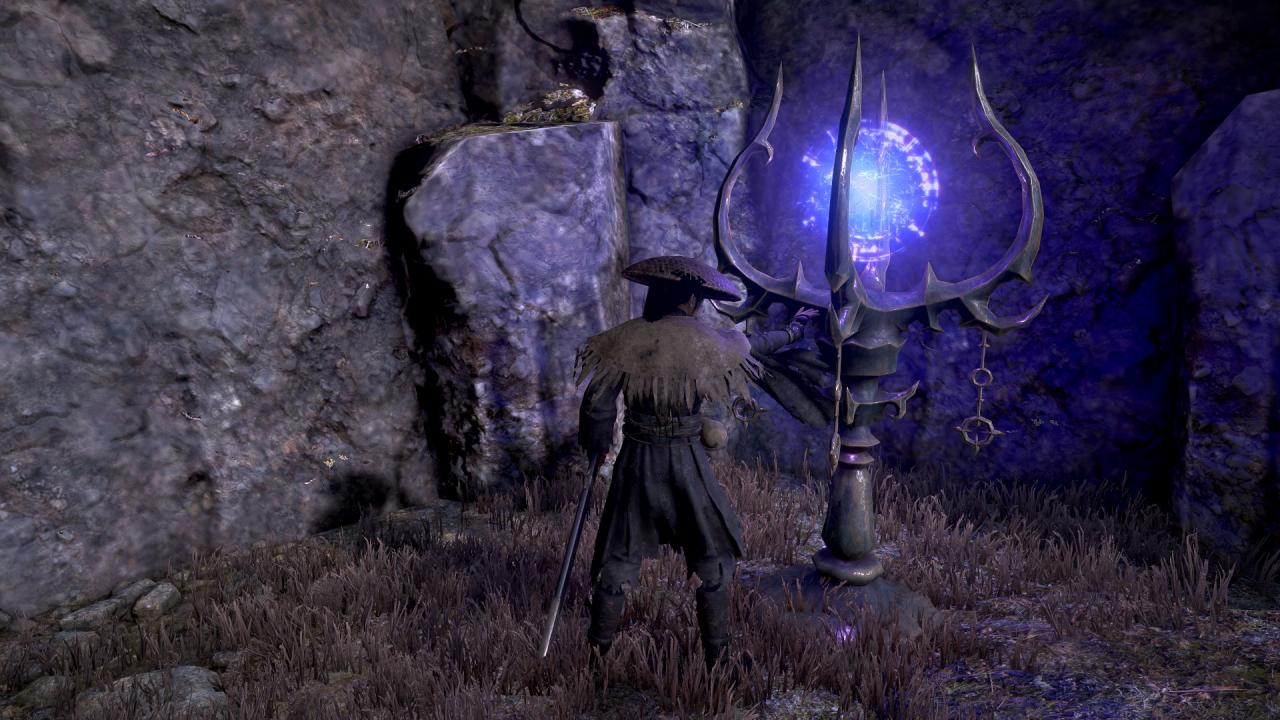 Traps and how to deal with them

You’ll find that the enemies aren’t the only things that make the world of 嗜血印 Bloody Spell a hostile environment for you. Throughout the world there are many traps set on ending your miserable life. While these are easy to spot in the first level, it’s easy to miss some in the second one.

If you’re having a hard time spotting those nasty bear traps in the high grass, you may want to consider setting the Graphics to “Good” (lowest setting) as that removes some of the foliage, making the traps easier to spot. 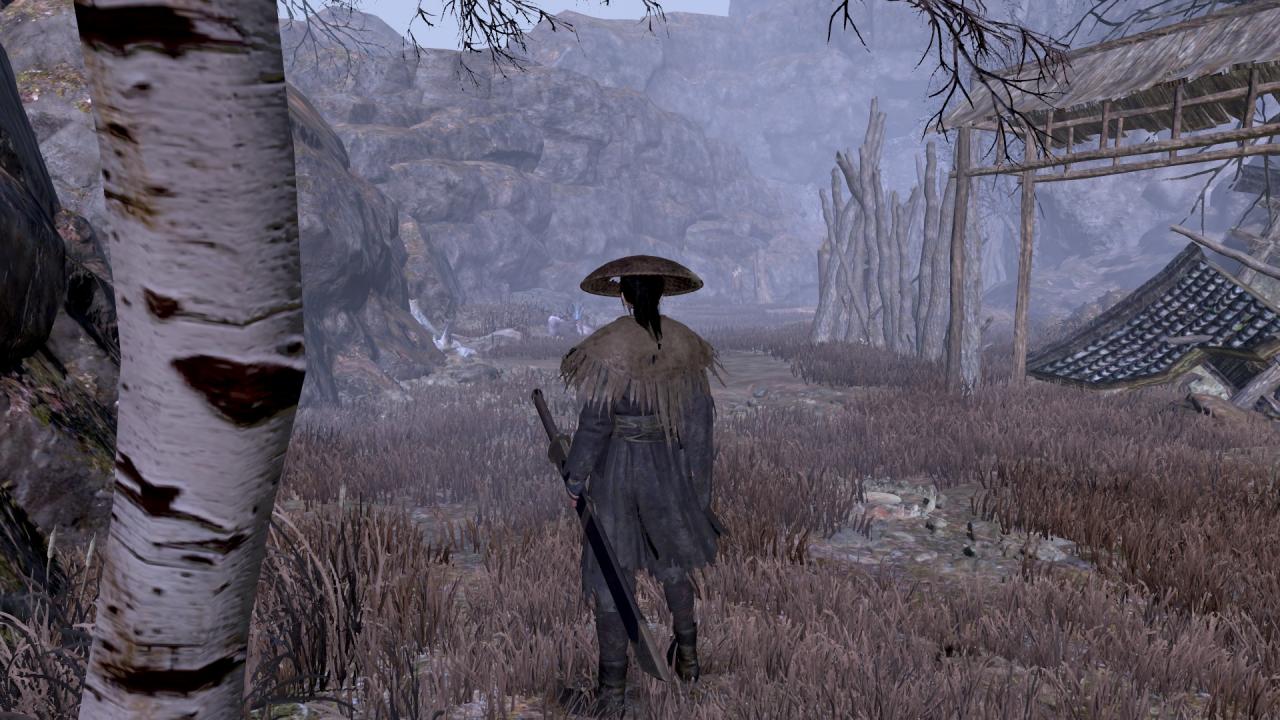 Using traps to your advatage

When dealing with traps and enemies, you have two advantages:

You’ll find that luring enemies into traps can chip off quite a bit of health, making your encounters with them that much easier. 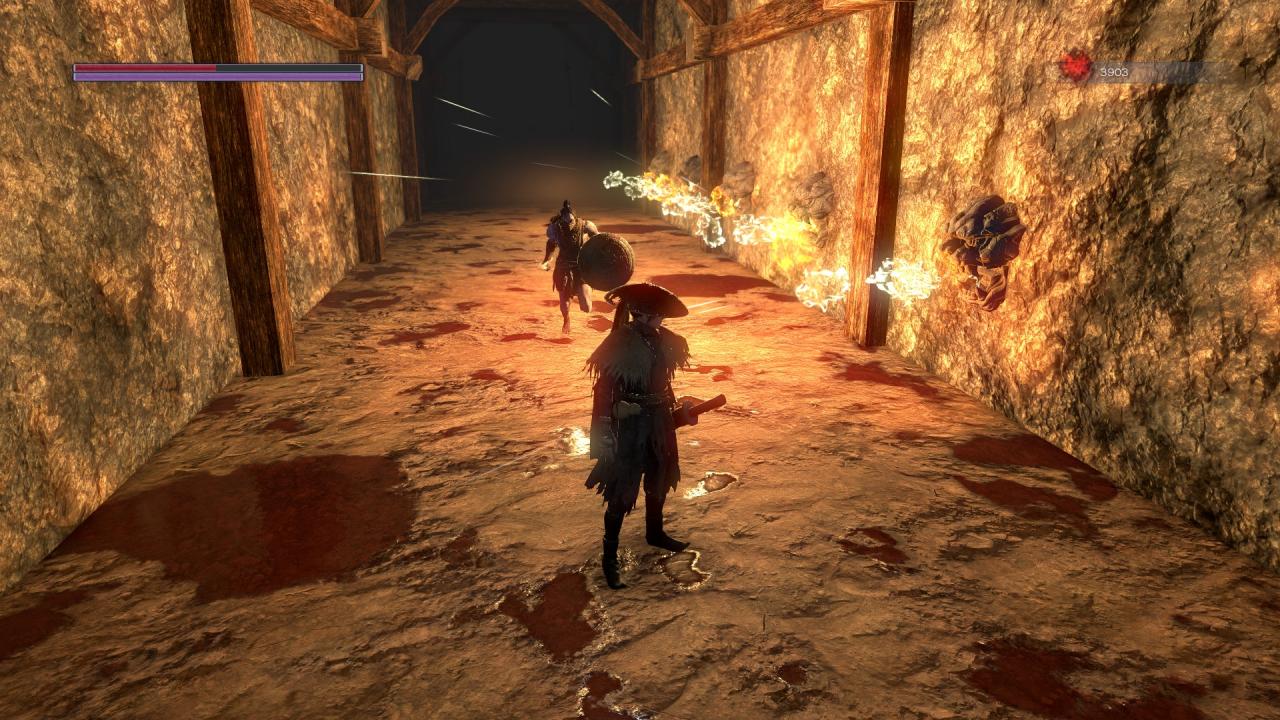 Bloody Palace is a mode where you fight waves of enemies, trying to survive as long as you can. The waves get progressively more difficult and every ten waves you’ll be faced with a Boss encounter (the first being the Ogre from the end of the first story level). At certain points you get rewarded with a piece of a unique armor set and at certain other points, chests will spawn to help you recover lost health and earn more rewards.

There are several things worth noting here:

This is where you can challenge yourself further and unlock sexy female costumes and other neat things as a reward.

The goal in this mode is to clear variations of the first level in succession, while each run has higher difficulty than the previous one. The spawn location is also different each time. Hell Mode has five different stages, each of which ending in the same boss room but each with a completely different layout. After defeating the boss, a purple portal will appear that takes you to the beginning of the next stage (or back to the main menu after Stage 5 has been cleared). 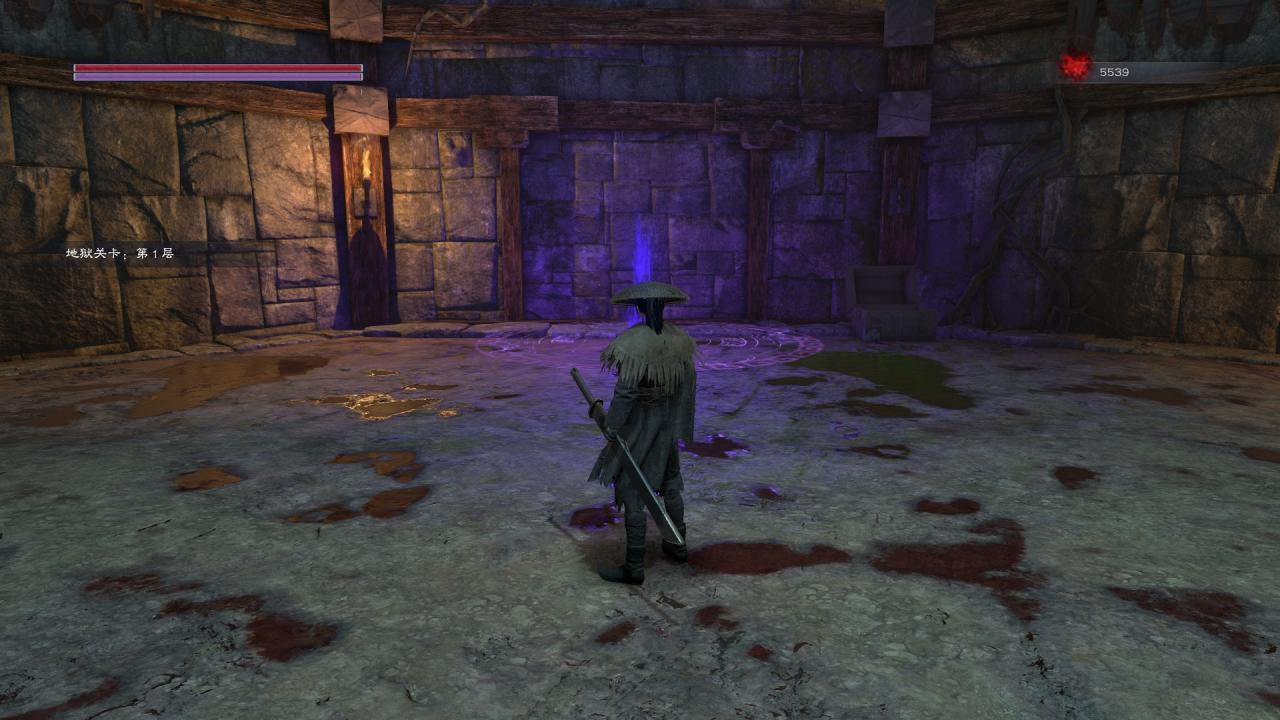 Hell Mode is quite the challenge but in one regard it is somewhat forgiving:
If you happen to die in this mode, you will not have to start at the beginning of Stage 1 but can just repeat the Stage you last played. All other death penalties still apply, though. 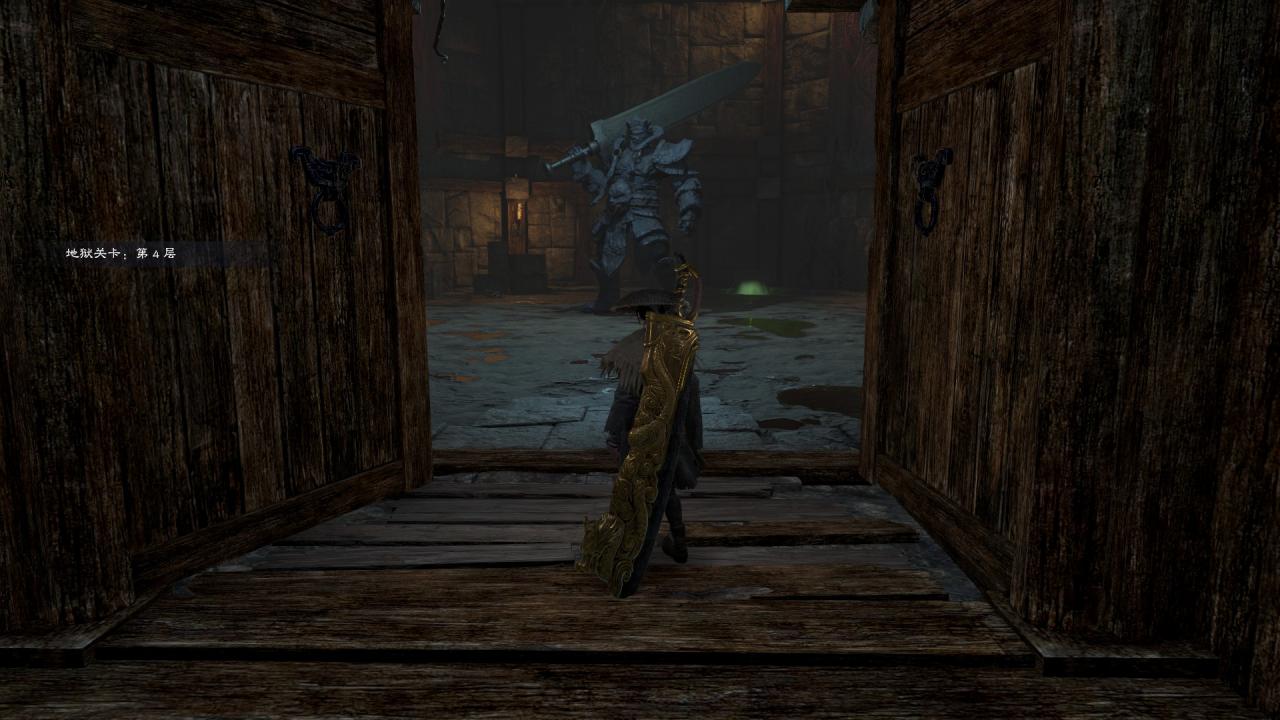 The Boss of Stage 4

After defeating the boss of Stage 5 (which I’m not gonna spoil here) you receive one of the female outfits or a different random reward. 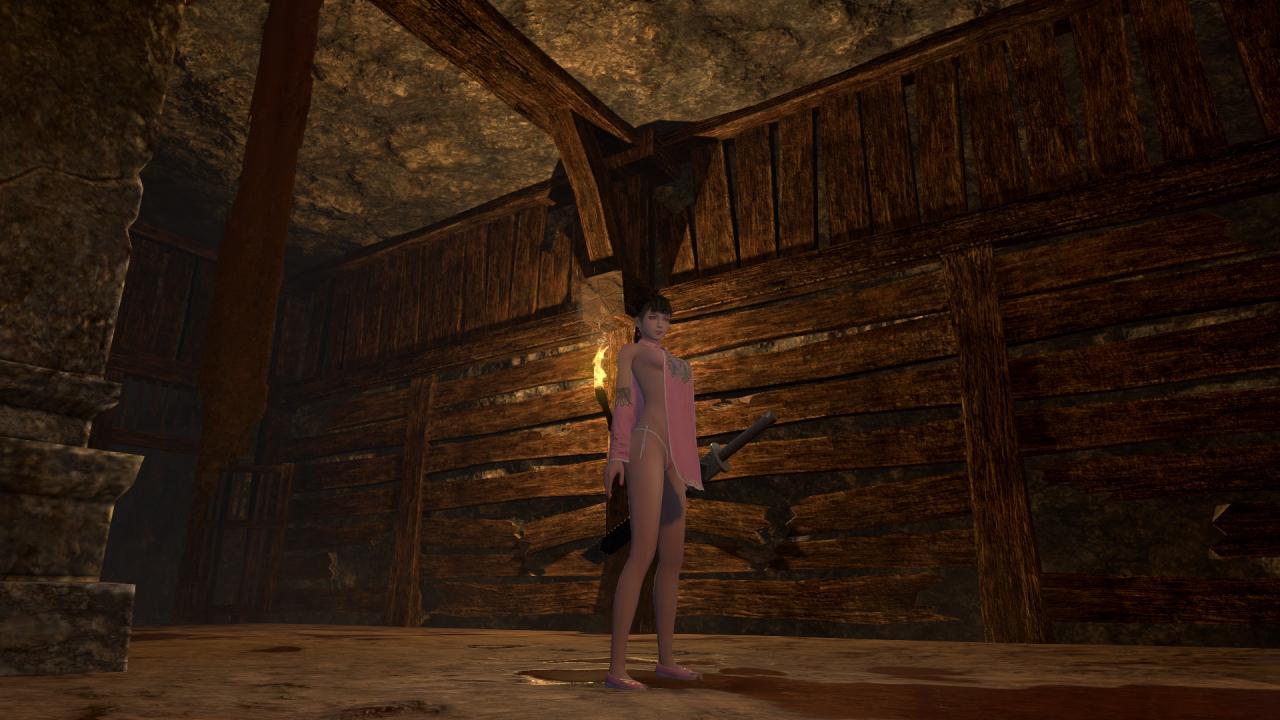 I won’t be giving away any specific secrets here as those would be spoilers and not exactly specific to “Beginners”.

There are plenty of secrets scattered throughout the world and I’ll show you what to look out for.

If you see a wall that has some crakcs (the ones that are large enough to see through them), you can bet your a$$ that you can break that wall down. 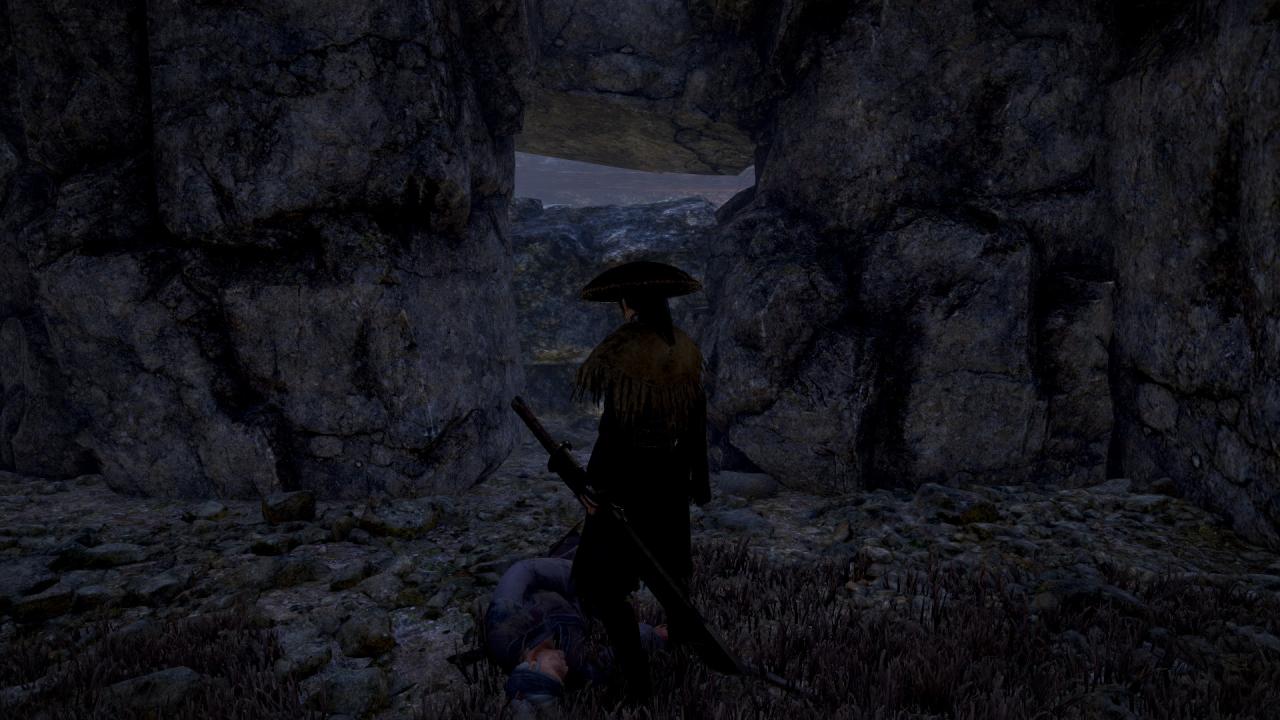 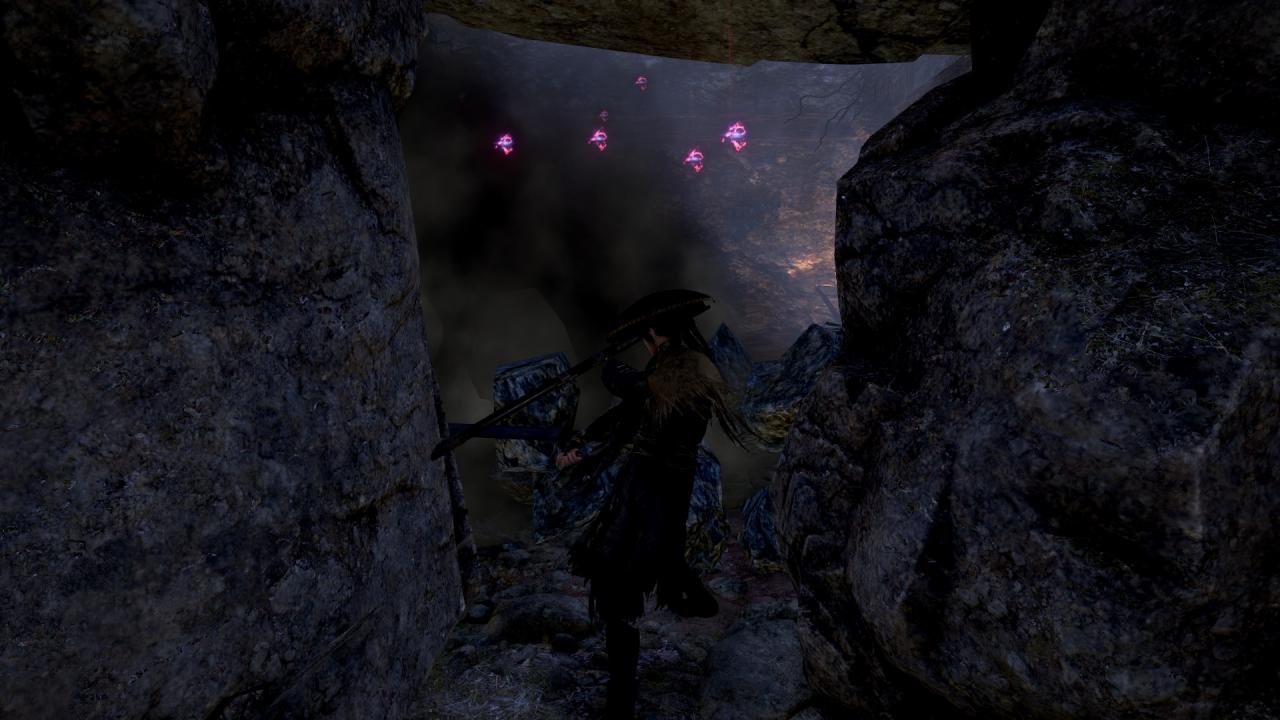 The sections behind those walls are always short (a singular room most of the time) and always worth checking out.

As mentioned in the farming section above, you can break wooden crates and the likes. While you should do that always anyway, there are sometimes little secrets hidden behind them, so do watch out for those.

If you’re looking for something more specific, feel free to check out my other guide:

Simple guide explaining where the powerful and beautiful Dragon Sword is and how to reach it.

There are many more secrets than that, so keep explorin’!

If you’re into making nice looking screenshots, then say hello to my little friend… the [Tab] key. Holding it down will remove the HUD. Some of the screenshots in this very guide have been created using this, so… there you have it! 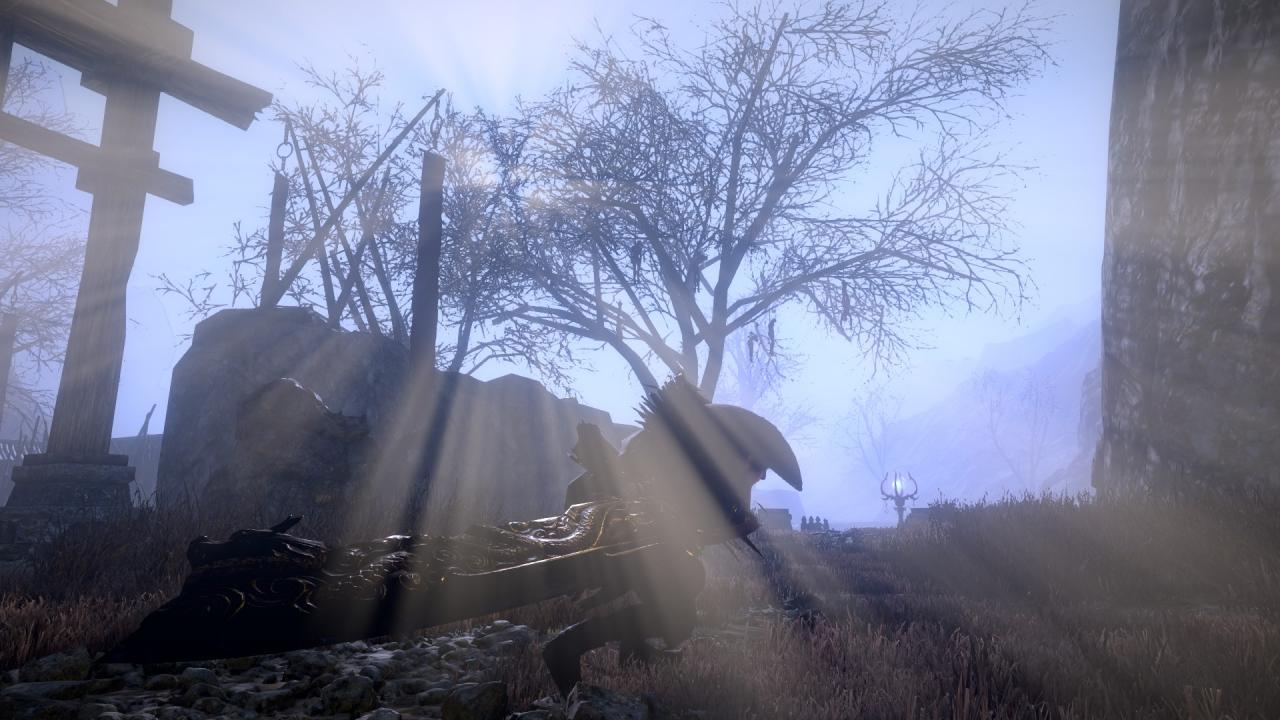 I recently made the discovery that the game apparently calculates how long you’ve been falling to decide whether or not to apply Fall Damage. This may sound obvious and unimportant at first but the thing is – if your system’s performance is somewhat low, you’ll be falling slower due to low framerate, meaning you’ll be falling longer even if you don’t fall far.

I’ve found my character to take fall damage from regular jumps when I cranked up the Graphics settings on a weak machine for nicer screenshots, so do make sure to choose your settings accordingly.

Since this game is currently still in its Early Access, the ending we get at the time of writing this, isn’t the final ending. Sadly it also isn’t translated, yet. So here’s what happens…

After you defeat the Boss of the second level, one of the game developers will show up and music starts to play. Talking to that developer will give you a dialogue with a choice at the end.

Choosing “Ok” will basically start a New Game+ by sending you back to the start of the first level. You get to keep your equipped items etc. but you lose your Blood etc. – just like dying. Note that if you have the skill that lets you retain some Blood upon death, you’ll start the New Game+ with some Blood accordingly. Choosing “Back” will end the conversation and give you no option to talk to the developer again, meaning you’ll have to quit and reload the game. Doing so will reset the Boss encounter, meaning you have to fight and defeat him again. 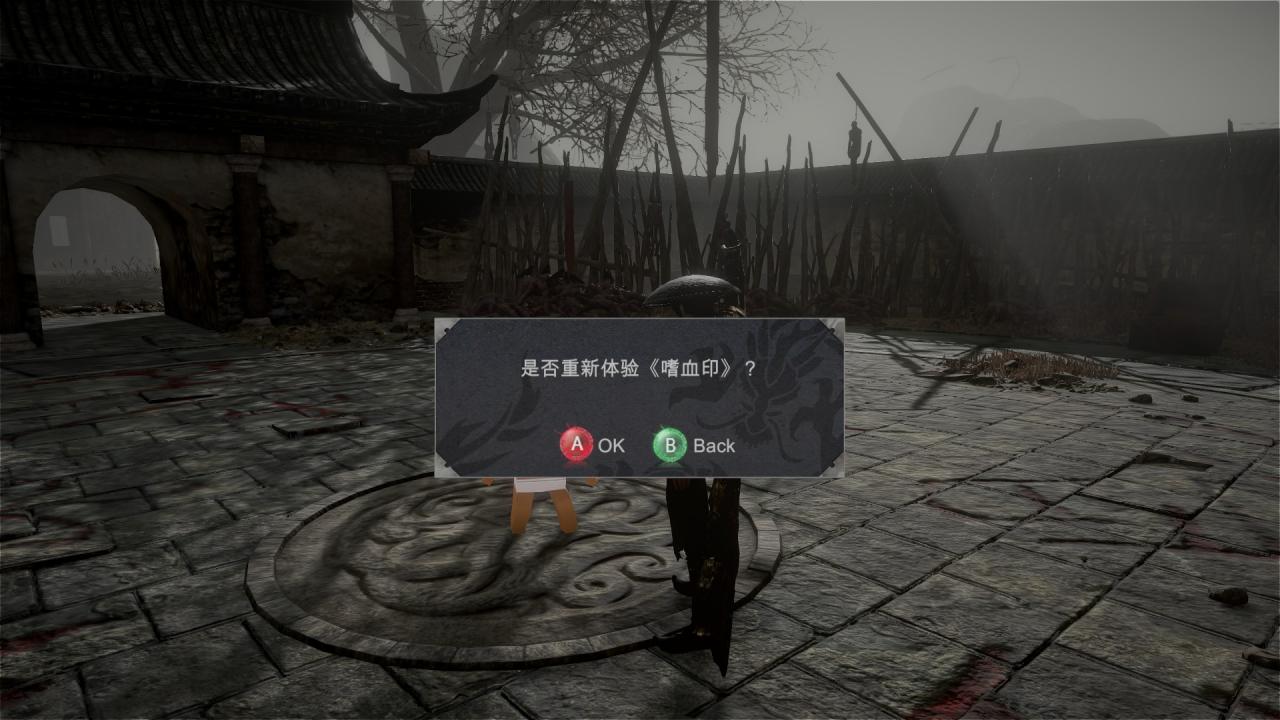