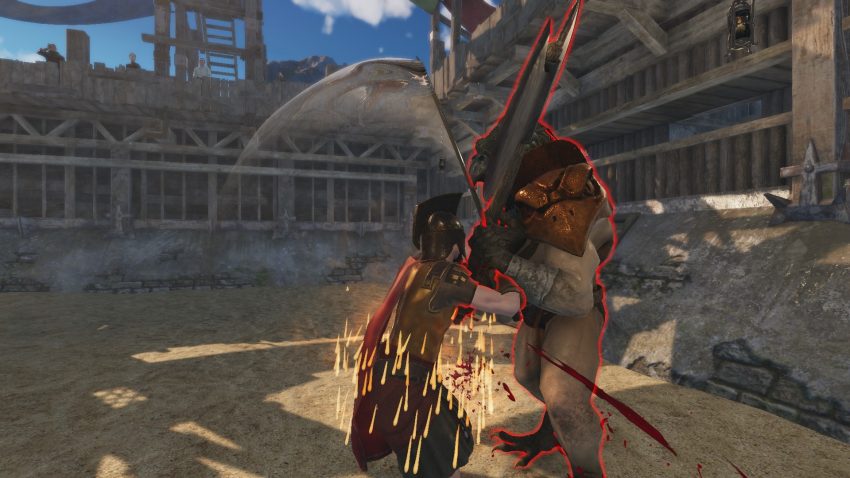 Two-Hand Weapon: Good at AoE damage. Minor CC. Can take out a squad of gladiators if that squad is positioned correctly. Good at removing stamina. The DPS comes from the interplay between Wild Sweep, Reaper’s Cleave, and Trio Slash. These abilities combined together are incredibly powerful even against a single opponent.
-Race: Human
-Stats: Strength (no other stat is needed)
–Overwhelming: 3
–Spiral Slash: 3
–Wild Sweep: 3
–Mighty Guard: 3
–Reaper’s Cleave: 3
–Hilt Strike: 3
–Trio Slash: 3
–Two-hand weapon master: 3
–Gladiator: 3
–Kick down: 1
–Medium armour expert: 3
–Battle furor: 3
–Distance attack: 1 (attack speed too slow to go any higher on this)
–Commander: 1
–First Aid: 3 (because why not)
–Stimulate: 3 (allows entire team to buff itself)
–Rescue: 3
–Condemn: 1
–Harasser: 3 (don’t know if this works as I think it does) (idea is that everything that gets hit gets debuffed with this dodge penalty)
–Power in numbers: 1 (random extra point)
–Rogue: 1
–Cunning: 3
–Evasion: 1

Weapon & Shield: Probably the most broken class in the game. Can achieve 100% block rate. A great support class that is completely immortal.
-Race: Dwarf
-Equipment: Dueling sword + solidarity + champion’s cloak + heavy armor for 100%+ block
-Stats: Endurance
–Expert blocker: 3
–Knock shield: 1
–Stone like: 1
–Sentry: 1
–Jump slash: 1
–Shield master: 1
–Commander: 3
–First aid: 3
–Stimulate: 3
–Rescue: 3
–Power in numbers: 3
–War roar: 3
–War banner: 3
–Defender: 3
–Impair attack: 1
–Heart of beast: 1
–Unyielding: 2 (should proc dwarven son of rock for heal to 30%)
–Deterrent: 1 (attacks so slowly with such low accuracy that this doesn’t do much)
–Intercept: 1 (for when a target changes targets, though it has a minimum range, so limited use)
–Guardian: 3
–Focus block: 1 (no need to ever use this)
–Heavy armor expert: 3 (to get movement speed up)
–Fortress: 3

Ranged Weapon: Ok at taking out groups. Ok at taking out single targets. Very good at kiting due to high movement speed. Can kill anything expect Defenders and true Rogues.
-Race: Elf
-Stats: Agility and Precision (24/18) with remaining points into intelligence when approaching 25 so no points are wasted.
–Power shoot: 3 (good for team fights)
–Disabled shoot: 3 (good kiting ability)
–Falcon eye: 3
–Take the wind: 3
–Penetrating missile: 3 (good for team fights)
–Multi shoot: 3 (good for 1v1s and team fights, 300% damage if you aim it right)
–Execute shoot: 3? (not sure if this is actually good yet)
–Range weapon master: 1
–Rogue: 1
–Cunning: 3
–Evasion: 1
–Blinding dust: 1
–Light armour expert: 3
–Ranger: 3
–Strider: 3
–Dodge missile: 3
–Avenger: 3? (not sure how this actually procs)
–Close encounter: 1
–Slide strafe: 3 (not sure how good this actually is)
–Black flip shot: 1

Dual Weapon: Best used as assassin style class. Should not fight head on. Instead should skirt along the side and hit gladiators in the back. Can go around a fight and go after archers very effectively as well. While 2-handed’s can do a lot of damage, a 2-handed’s damage is not sustained. It is burst. This class is the clean-up crew and can do pretty decent sustained DPS, more-so than a ranger can. They move extremely fast and nothing can escape them. They are just harder to use than rangers as they have very low health. They can easily get out of danger though due to their incredibly high movement speed.
-Race: Elf
-Stats: Agility, Precision, Intelligence, Strength (not sure if agility actually increases attack speed, so agility may be best dropped for precision and intelligence with a little strength) (I ran 24 agility, 19 precision, 12 intelligence, 13 strength)
–Cross cut: 3
–Quick withdraw: 3
–Harmonious wield: 3
–Speed burst: 3
–Serial ♥♥♥♥♥♥: 3
–Dual weapon master: 1
–Gladiator: 3
–Distance attack: 3
–Rogue: 3
–Cunning: 3
–Evasion: 1
–Lurk: 3? (not sure how well this works)
–Blinding Dust: 1
–Light armour expert: 1
–Surprise attack: 3? (not sure on the conditions for a surprise attack)
–Envenomed weapon: 3
–Low profile: 3 (important to keep enemy from turning around to face you)
–Ranger: 1
–Strider: 3
–Dodge missile: 1
I went with light armor, short cloak, and double Tai Chi.

Polearm: Doesn’t do quite as much damage as a greatsword. Actually does a LOT less. However, where it lacks in damage it makes up for in cc. It has a few great aoe cc abilities and is the only class that actually has aoe cc. Can be useful to keep a group of gladiators stuck so that your great sword can mow them down.
-Race: Human
-Stats: Strength
–Precision attack: 3
–Upstroke: 3 (useful on single large targets)
–Armor penetration: 3
–Perforate stab: 3
–Round sweep: 3 (not great, but it’s a follow up for the aoe cc)
–Stumble sweep: 3 (best ability on polearm)
–Polearms weapon master: 1
–Gladiator: 3
–Kick down: 1
–Medium armour expert: 3
–Battle furor: 3
–Distance attack : 1
–Power strike: 3 (polearm does do higher damage than great sword after all)
–Commander: 1
–First aid: 3
–Stimulate: 3
–Rescue: 3
–Condemn: 1
–Harasser: 3? (mainly off of abilities) (not sure if this would work)
–Power in numbers: 1 (random extra point)
–Rogue: 1
–Cunning: 3
–Evasion: 1

Team compositions:
I usually run one of the following teams

My opening move in 4-man is I jump with defender and then run forward to get close to enemy gladiators. I then taunt them. Meanwhile I flank on either side with the 2-hander/polearm or 2-hander/assassin. I move the ranger up a bit and then target a non-armored enemy. If the enemies are lined up I do a power shot. I execute battle furor + guard stance and roar. When I get close enough I use stumble sweep on polearm and trio slash on 2-hander or double trio slash. As I’m starting this I put down a banner. After stumble sweep/trio slash I then run round sweep and spiral slash. I move the ranger up with slide strafe and unload a multi shot. If anything’s left alive I just let my gladiators chase it. If I’m running an assassin I run the assassin along the side and target any squishy’s like dual wielders/rangers. I always run the assassin behind the squishy target, pop speed burst + envenomed blades, and then open up with serial ♥♥♥♥♥♥ followed by cross cut. If I’m only running one aoe, like a single 2-hander, to bring in the assassin, the enemy gladiators are usually at very low health after the aoe combo. I just run the assassin from target to target to finish each one off. The extremely fast movement speed and attack speed doesn’t give the enemy gladiators any chance to recover. I usually take 0 damage.