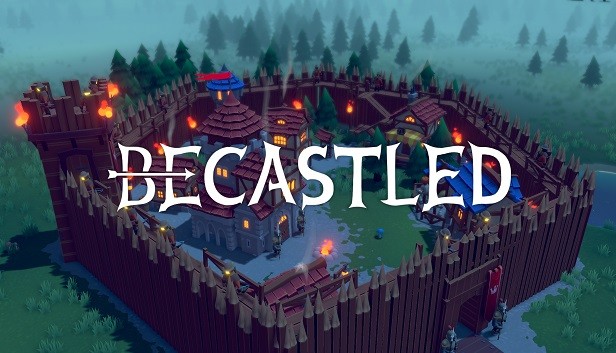 Becastled players, follow this guide and you will learn the building order in Becastled, how to defend your kingdom from enemies, make citizens happy and where to get food and sunstones. I will guide you though your first few days of building structures, explaining what each does and show you how to train soldiers to help you survive the nights as dark enemies attack in force.

The start of each game

You start each game in Becastled by building — you guessed it — your Castle. This is your main building and if it is demolished, it’s game over. It’s also the place from which you get new villagers, who are called Solar Citizens in this game. 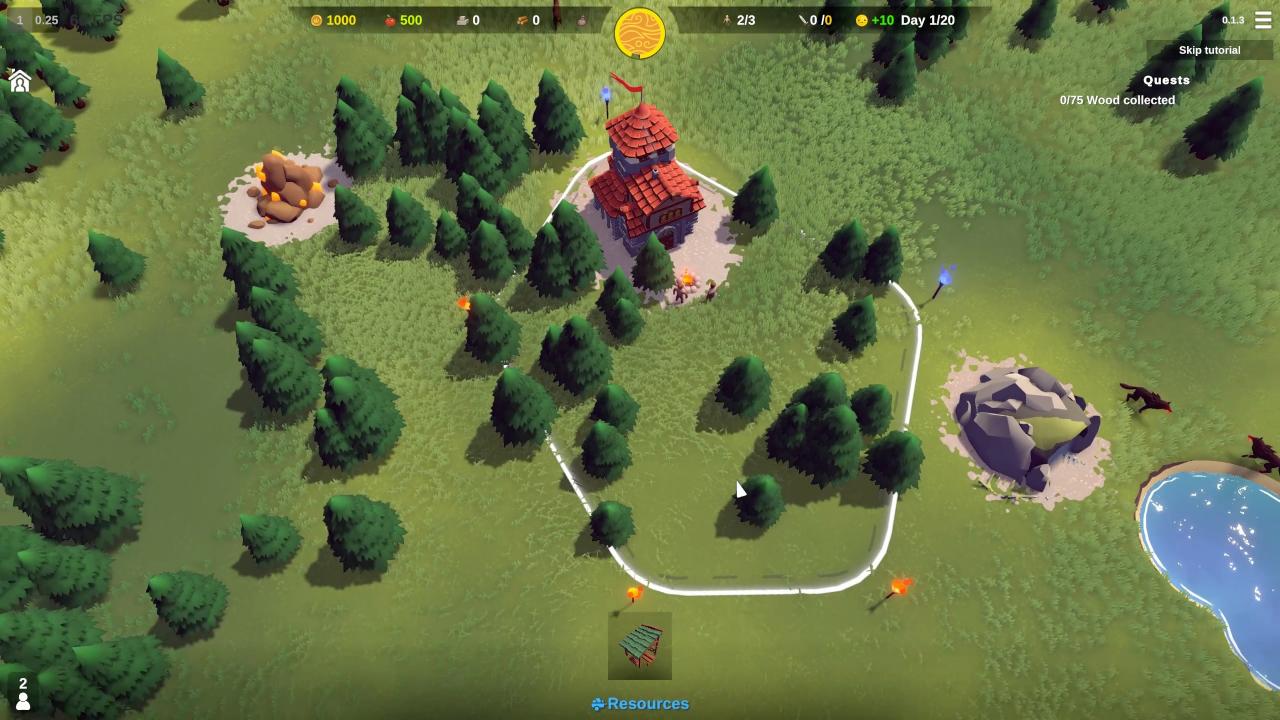 Each Solar Citizen can construct buildings, but they can’t repair them. For this we need to construct a builder’s guild and employ citizens as builders. You can rotate buildings with the C and V keys to orient them any way you want. First we need a sawmill to harvest wood from the surrounding trees. This resource is mainly used for construction of buildings but also for capturing new areas of the map, which are called cells. The other basic resources are food, stone and sunstones. We will cover these later in guide.

If you prefer to watch guides rather then read them, here is a link for you:

Next we need a house to increase the maximum number of Solar Citizens who can live in our sunny kingdom. 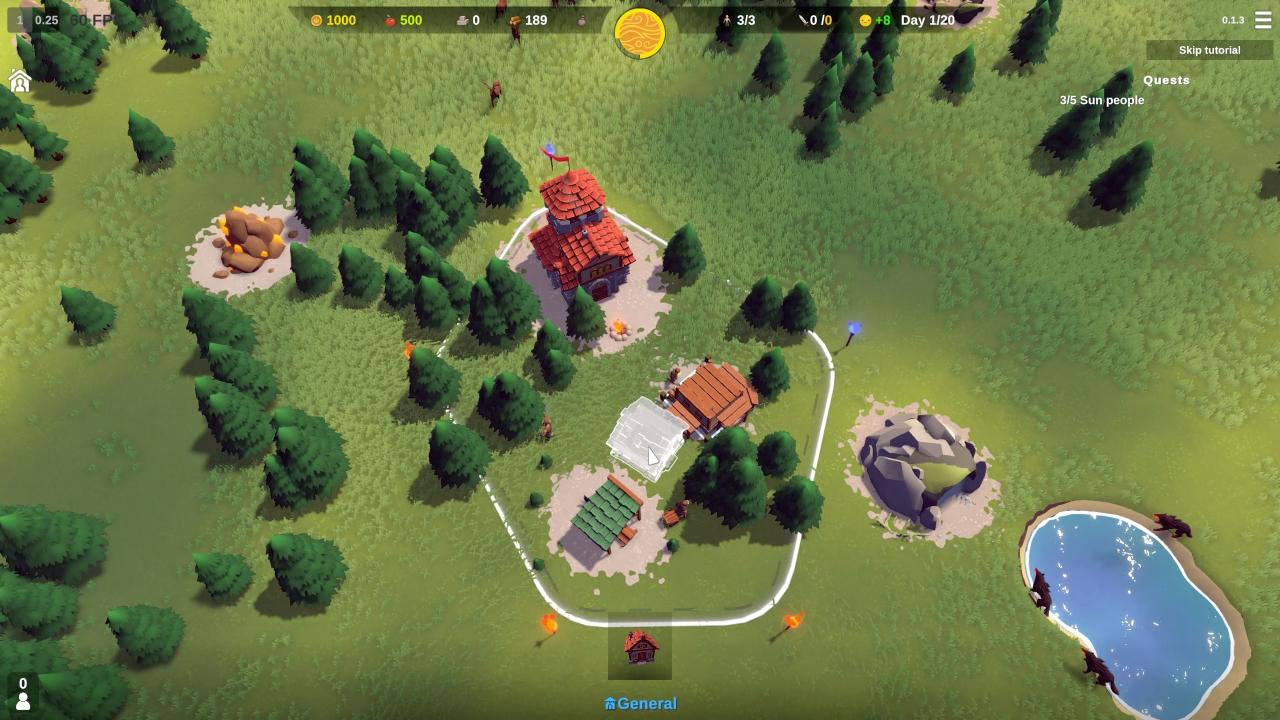 With new Citizens the need for food goes up, so we have to expand our kingdom into neighboring cells to acquire areas where food can be produced. When you click on any cell you don’t own, in the lower right corner you can see how many resources it takes to capture that cell and what can be harvested inside it.

This ones where there are cows in, you need to construct a farm in that cell to produce food. Farms and other food production buildings are limited to one per cell. You can also find boars and deer which require hunters huts; while cells with lakes need fishermen’s huts; and lastly cells with flowers need fields and windmills to produce crops.

Once our farm is constructed, cows are herded into it and will start producing food if there are Solar citizens working on that farm. Most buildings have room for two workers by default but this limit can be raised by spending stone.

On the top of the screen you can see the countdown until night time and with it the dark and monstrous enemies. The game will supply you with a starting garrison of soldiers armed with swords and shields. It will also indicate the direction from which the enemies will attack by lighting up blue torches at the borders of your kingdom. 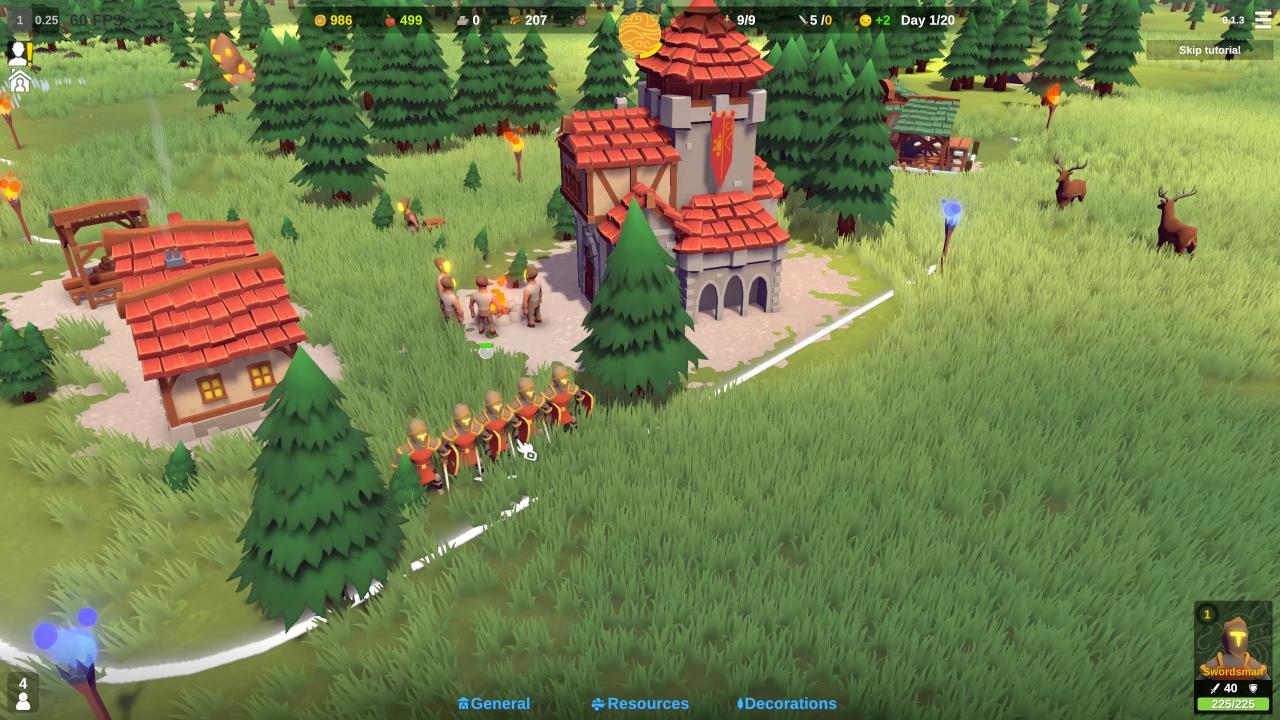 This is where you need to mount your defense by setting up your soldiers and fortifications. This first raid is just a probing attack so no need for walls and towers but later you will need even more than that to survive the night.

The decorations build tab offers a variety of stone sculptures and vegetation to customize and beautify your kingdom. Just don’t go overboard with those as you will spend resources you will need elsewhere. 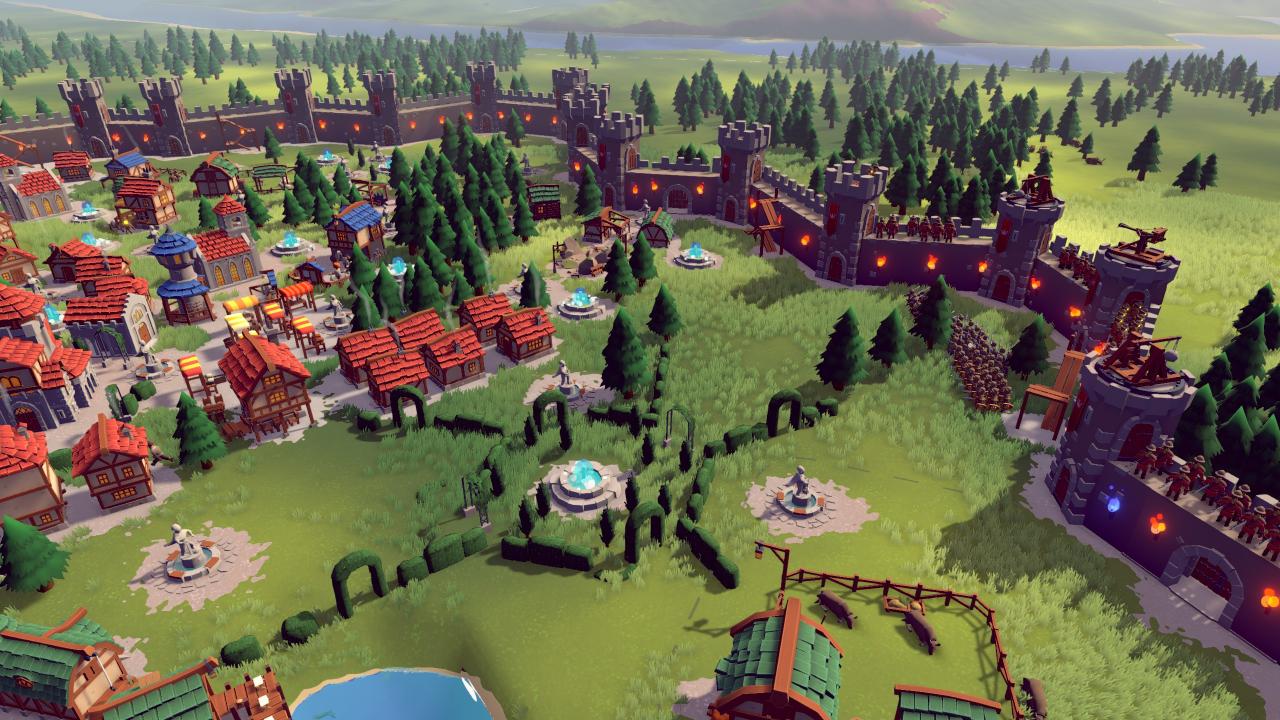 As night falls, Solar Citizens run and hide while their soldiers await the enemies. Combat is quite fast as your soldiers and the enemies deal a lot of damage to each other. You can keep your soldiers alive by using a common RTS tactic of rotating low hp units out of the front line with healthier ones. You can even slow down time to make this easier.

Once a new day dawns, it’s time to get serious about protecting your kingdom. Your first investment should be an archery range, where you will be able to train archers. Each archer has a fixed price in sunstones and takes a while to train. You will also need to build more houses to increase your population so you have citizens who can be trained as archers. 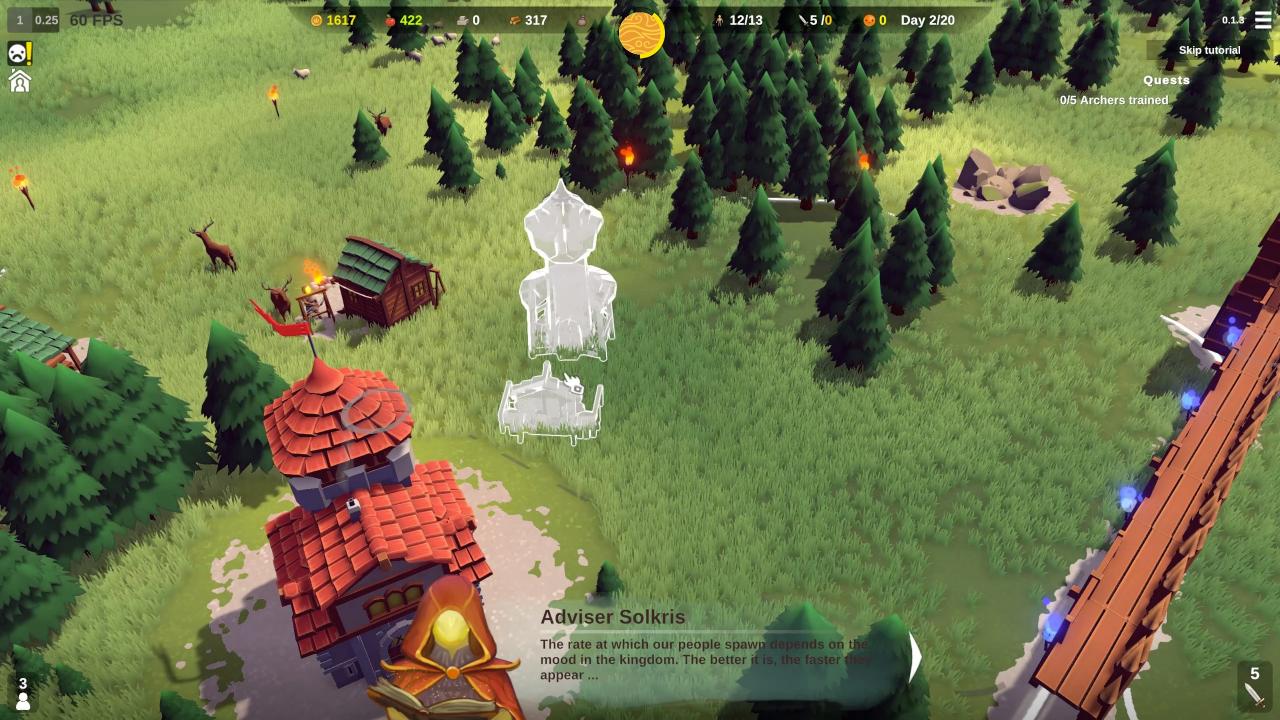 Your castle spawns new Solar Citizens at a certain rate so planning and timing is key. This rate speeds up or slows down depending on the conditions in your kingdom. There is an entire happiness system in place and you can see the indicator for it in the top UI bar. Higher population reduces happiness, but buildings such as taverns will increase it. We will cover this in more depth later in the tutorial. 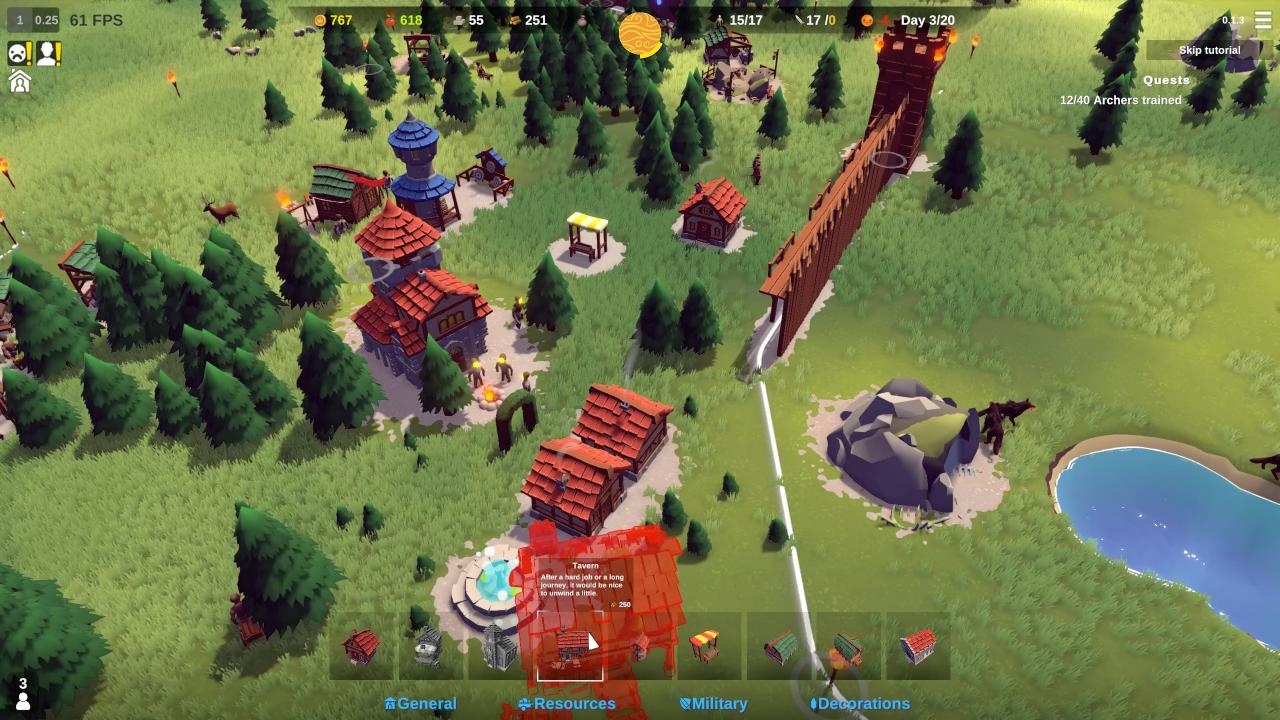 Now we need to start constructing fortifications to defend our kingdom. Let’s begin with a tower because it has multiple useful features.. First, it has parapets on top which provide great protection for your archers and give them a good vantage point to shoot from. Second, it has higher HP than the walls.And third, it has secure doors which prevent enemies from just climbing up. 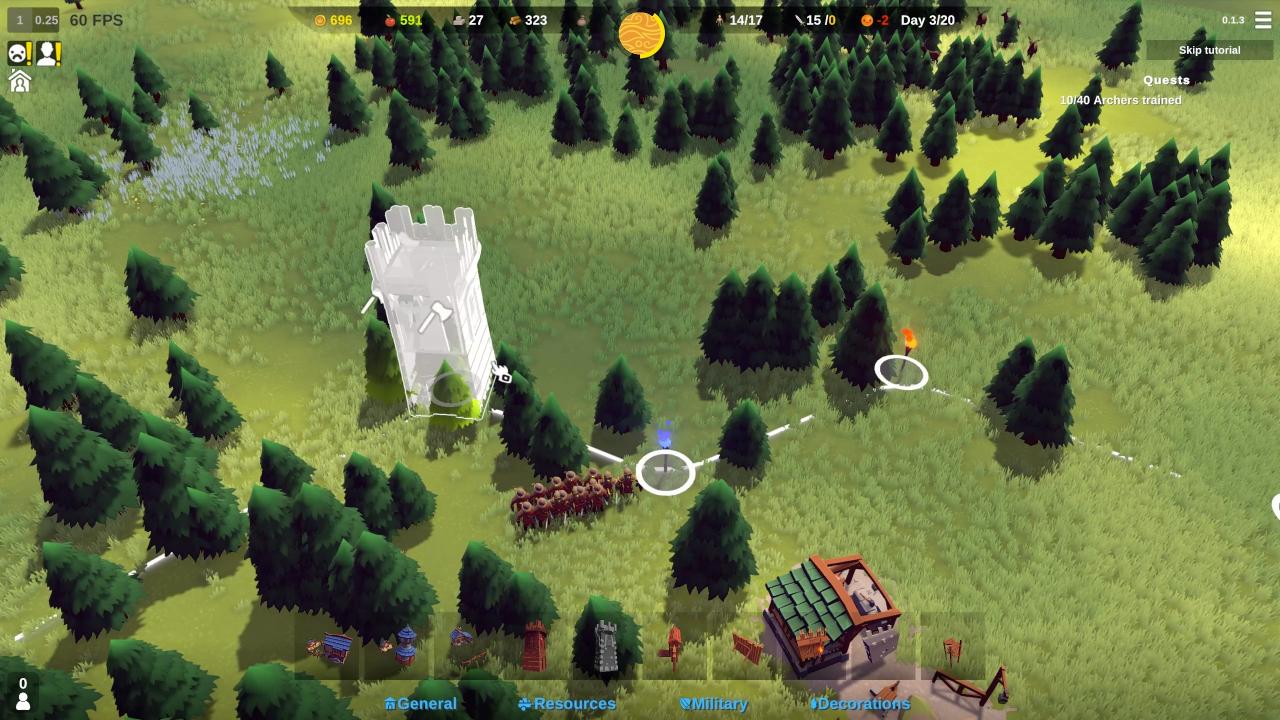 Other defensive buildings include the fence and the wall which you can construct to guard your borders and deny entry to the dark ones at night. The fence is cheaper and quicker to construct but has less HP than the wall. There is also a gate but we don’t need that just yet.

Once the walls are completed, you can place the archers on the walkways, but keep in mind they are much more exposed on them compared to the tower. 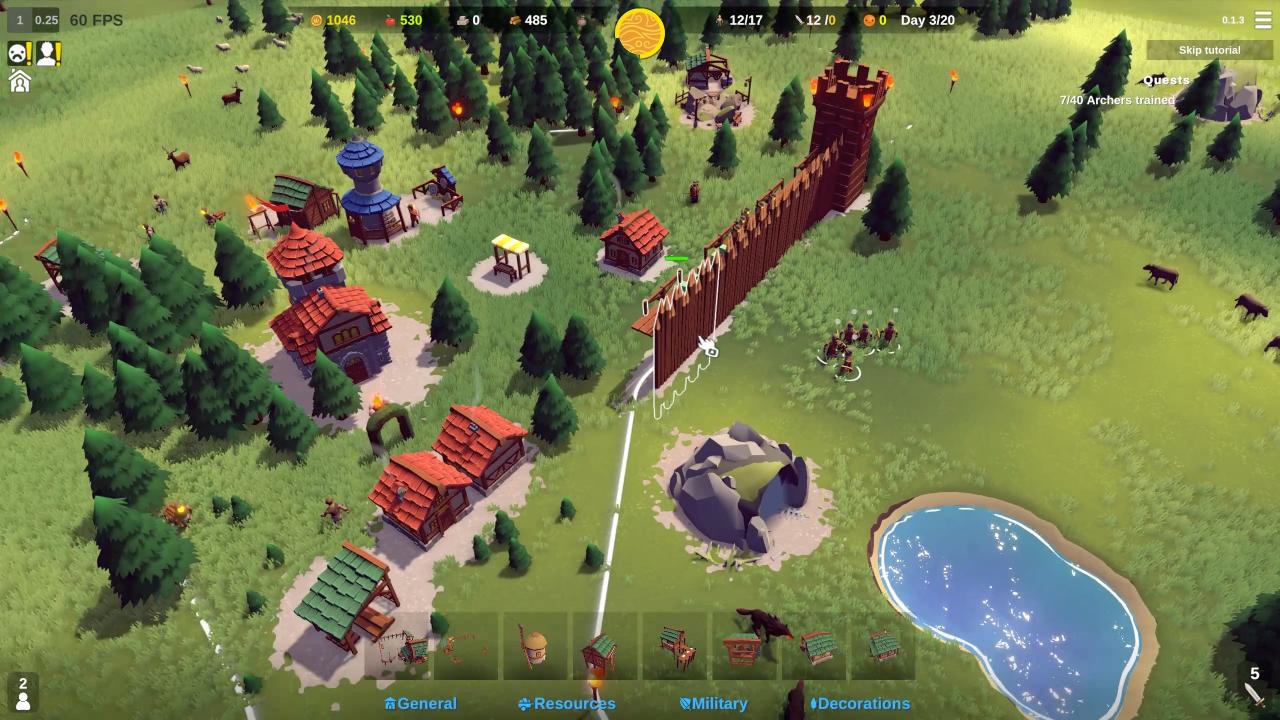 With more citizens and soldiers you will start to run low on food. You will need to find another cell with food, capture it and construct a food production building. Like the hunters hut on this cell with wild boars.

Successive waves of enemies are much more numerous and so it will be for every next night. Soon they will start bringing rams, catapults and worse. 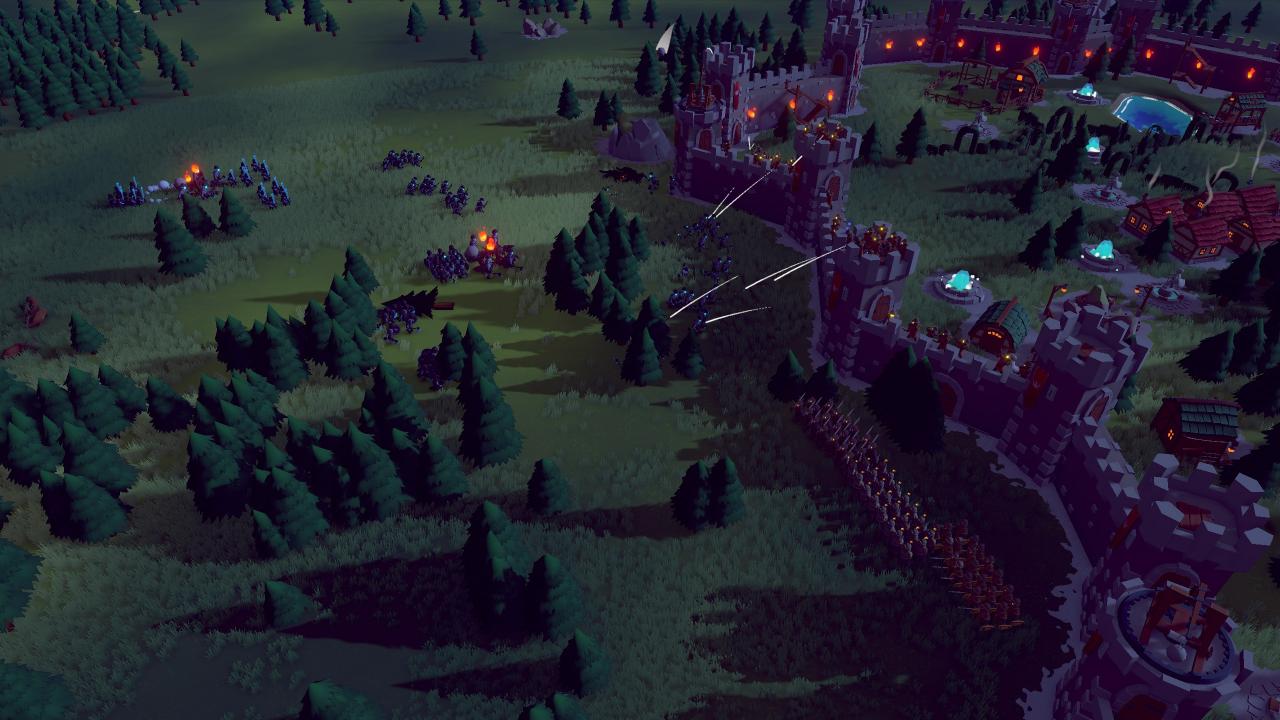 Now we are running out of sunstones. This is because sunstones are used to heal soldiers. Luckily we will always have a sunstone source close to our starting castle. All we need to do is capture that cell and construct a sunstone workshop in it. This is like a mine and it produces new sunstones at a constant rate. Remember, you have to send some Solar citizens to work it. 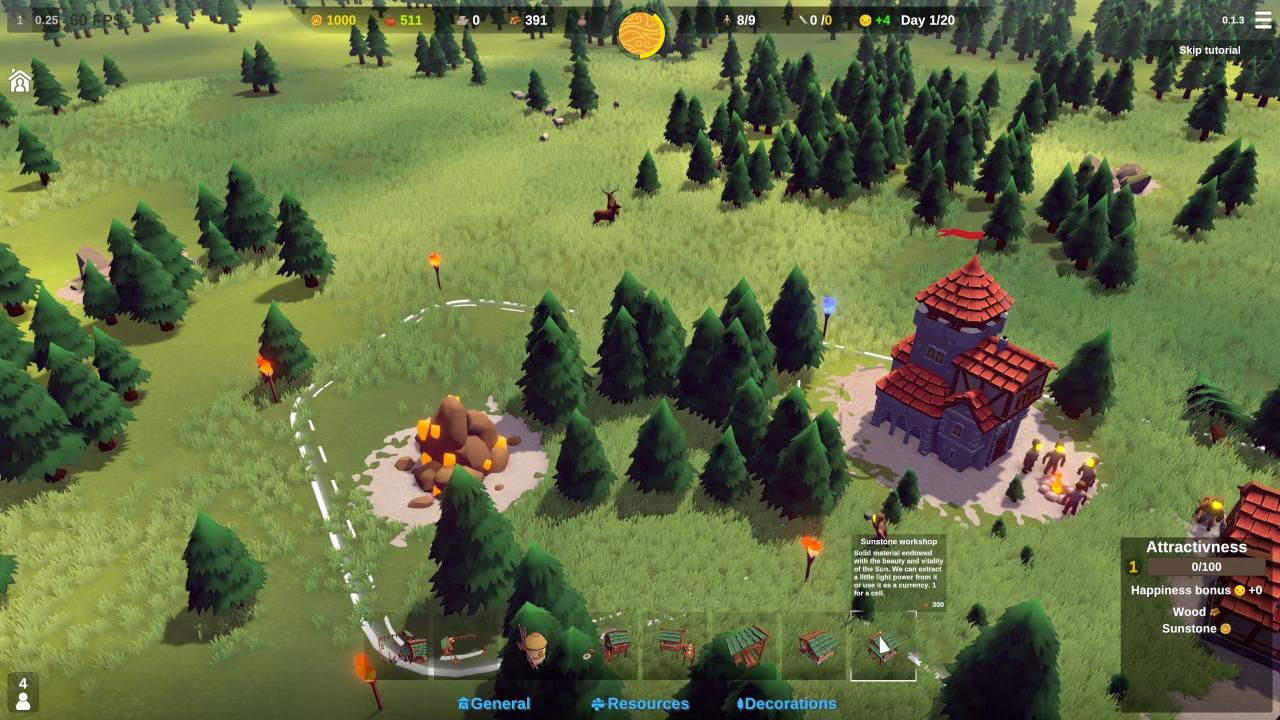 Next, you can choose to construct a market. While the name of the building suggests a large structure it’s actually just one stall. It indicates that there is a bonus feature somewhere but you get a bonus only when you build several ones close together, in this case we create the market by building several stalls close to each other. For a market to operate, it needs one solar citizen to work it and for you to choose a type of good to sell there.

If you need to upgrade the production of food, wood or sunstone you will need to spend stone to add additional solar citizens to the corresponding production building. To accomplish this we will next capture a cell with stone and construct a quarry. As always, remember to assign a citizen to work there.

To keep expanding our kingdom and to construct more fortifications, we will need to increase wood production even further. Let’s construct another sawmill, assign two citizens to work it, and also build more houses to raise the limit of Solar Citizens.

It doesn’t take long for the forces of darkness to grow in strength and numbers, and this next attack comes with rams and ogres. You want to target ogres with archers while your swordsmen need to attack the rams to prevent them from breaking through your fortifications. 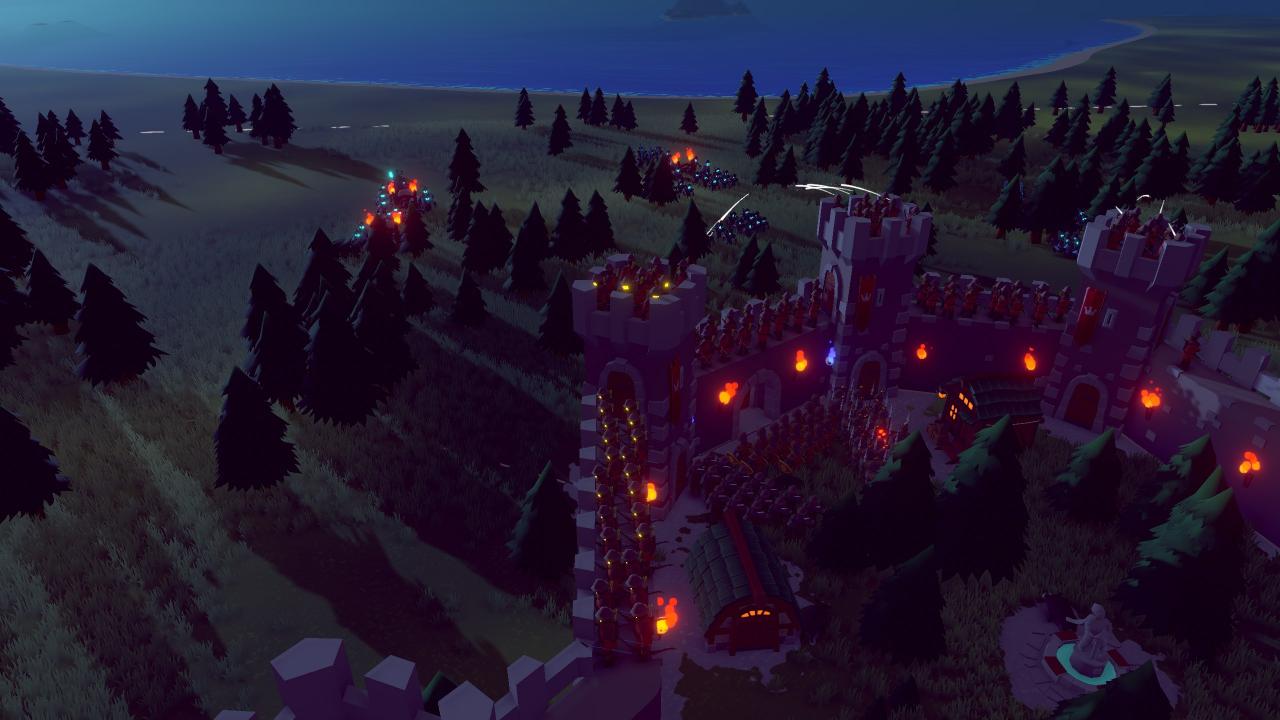 While the sunstone resource can heal wounded soldiers, we can also resurrect dead soldiers with the priest unit, which we can produce by constructing a church. We can also train new, more powerful melee units. like knights and pikemen, by constructing a barracks. Pikemen can stun and attack at longer range while knights deal more damage but have no protection.

More soldiers means more population and more population means less happiness. This is now the right time to construct a tavern and employ some Solar Citizens to help maintain happinessr with a beer keg or two. 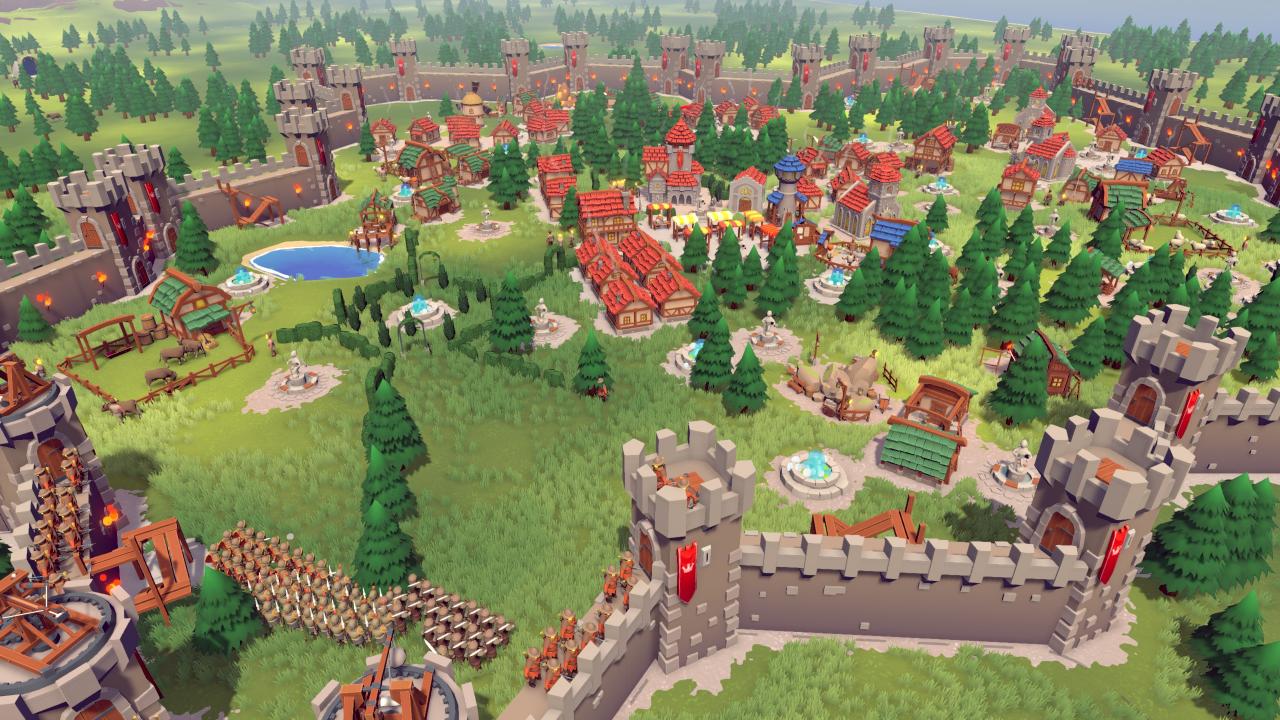 But happiness is not our only problem. Food is limited and to increase the supply we will need to use up the stone we mined to upgrade food production buildings so they can employ more workers. This will help temporarily but as each night approaches and the forces of darkness grow in power, we will have to expand and strengthen our kingdom by capturing more cells, constructing more resource production buildings and growing our population, fortifications and army to work and defend our newfound territory.

Once you have enough wood, stone and sunstones, you can construct trebuchets and ballistas on top of your towers. These are long range, powerful weapons which are best used on large formations of enemies. You first need a siege weapons workshop inside which you can order up the construction of ballistas and trebuchets. Two workers can work inside at the same time, one on each weapon.

These weapons have a constant maintenance cost. So you will not be able to place them on every single tower.

There are two ways of surviving the night: either kill all the enemies, or wait for the return of dawn. Don’t worry too much about your soldiers, as you can resurrect them come dawn with priests, just make sure to keep your castle in one piece. 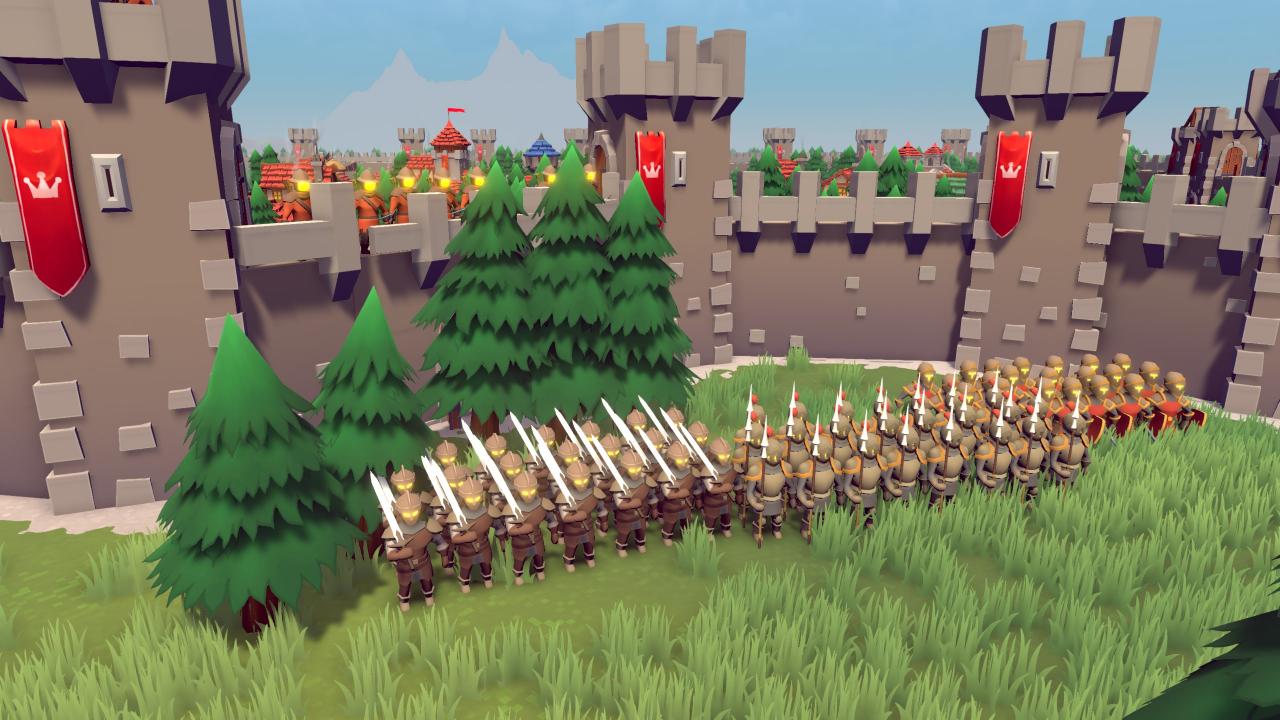 Those are the basics of how to play Becastled.

That’s all we are sharing today in Becastled Basic Gameplay Guide For Beginners, if you have anything to add, please feel free to leave a comment below, and we’ll see you soon.
Credit to Spector