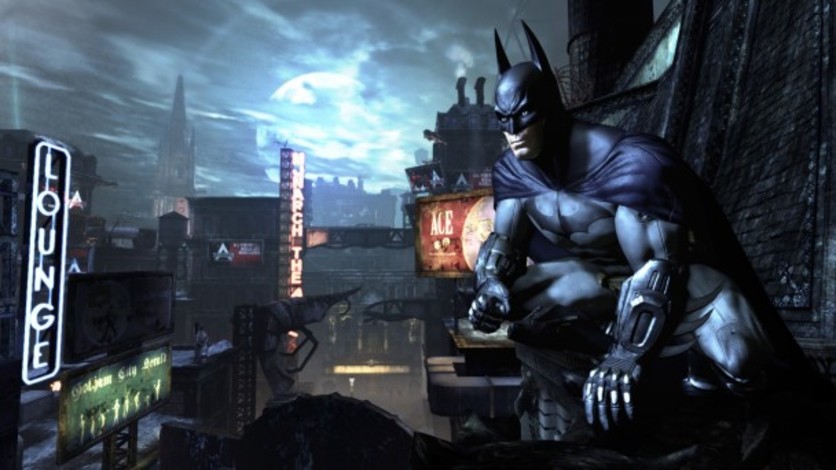 This guide will help newcomers get introduced to Arkham City’s mechanics and gameplay.

It may look like I have very few hours put into this game, but on the original account I played it on I had 14.3, and then I transferred my data over when in almost the finale. This is some tips for combos and what to upgrade in the game if you’re just starting.

Basic Controls (If didn’t play Asylum)
Use D-Pad to alternate between gadgets.

I use an Xbox 360 Controller on PC (I prefer it over the Xbox One) so I’ll have the Playstation control commands in parentheses next to it.

Basic Tips You Need to Know:

When at a dead end, go into detective mode, by pressing LB on the controller. This is handy for fights too. If there is an explosion symbol (should be like a jagged outline on a blue wall, and select your exploding gel and use it by pressing RT on the surface of the wall, and RB to detonate it. This will have Riddler Trophies and passageways to the designated area.

As mentioned earlier, Detective Mode is used in fights. In Asylum, putting it on all the time made the game easy. In City however, they evened out the odds. Now sometimes it’s easier to use regular mode. In fights however, put it on to see all the enemies in the room. Some enemies later on have these funky glasses that can spy on the gargoyles you prey on, and in detective mode the gargoyle being examined goes from yellow to blue. If you’re on that gargoyle they’ll start shooting you. Then press RB to quickly swing between vantage points and that’ll lose them.

Later on in the game, double tapping RT (RT+RT) will throw a freeze blast. Use this for getting over rivers and freezing enemies. Note this only comes after fighting Mr. Freeze in a boss fight.

For these rectangle metal boxes with yellow sides, you can shoot it with your Remote Eletrical Charge. Usually RB to open doors, and RT to push something down.

Upgrade Ballistic Armor Until it is fully upgraded. Thugs with guns early on in the game s are hard to take out without freeze bombs, and Ballistic Armor offers a chance at resisting them until you get close enough.

Batman Arkham City is a great game, and you should get it when it goes on sale for 5 dollars.