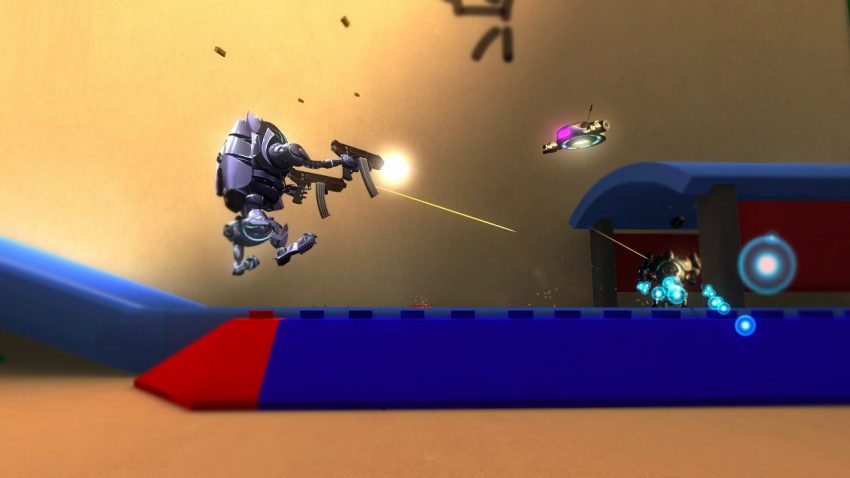 This is a guide about the game’s weapon that you can pick up, giving info. about them and when are the best times to use them.

NOTE: This guide is only about the Soldier’s weapons, not from other DLC robots. Also, this guide does not give A LOT of info, only quick and basic info.

This weapon is the starting weapon. It has infite ammo. When you spawn, this is the weapon you will ALWAYS get, if you want other weapons, you’re gonna have to find them in the map and pick them up.

This weapon deals a little damage when it’s not upgraded, but does deal more damage when you headshot someone.

Also, you can pick up another machine gun that someone dropped. If you only have ONE machine gun, pick another one up, and you’ll get TWO that fire much faster (I’m not sure if this will affect the damage).

This weapon fires powerful, area damage missles. However, they are kinda slow. You can upgrade the bazooka, so the missles will go a little faster.

If an enemy is in the missle’s radius, then the enemy will take damage. BUT, if the missle directly hits an enemy, it will deal more damage. Since the missles are area damage, the best moment to use it is when enemies are in a group, especially on TDM mode.

This gun is super powerful (without uprades!), it is probrably OP with upgrades. So anyway, this weapon deals massive damage to an enemy when close, the closer the enemy is, the more damage the shotgun will deal.

Other than that, that’s pretty much it. Oh! One more thing, the best times to use it is when you are close to an enemy, it should take 3-8 shots to kill an enemy (when close), depends on the robot’s armor.

(I think that’s the weapon’s name, but I like to call it Lazer Gun)

This gun shoots a powerful lazer beam (I think it’s a lazer beam, I DON’T KNOW) that deals a lot of damage. However, it takes ABOUT 2.5 seconds to recharge (I think). The recharge time can be reduced by upgrading this weapon.

The best times to use this is when playing on a big map. These lazers (like I said, I think they’re lazers) can travel at the speed of light, and they also travel far.

This gun is definitely OP, as I fires very fast and can kill players easily, especially on headshots (duh), and trust me, I don’t like to use this weapon a lot, because then people will get mad and annoyed, which then, they will leave the game. Just try not to use this OP weapon all the times, because then people will leave, and the game is less fun with less people, which means less fun for YOU! Uh-oh!

The best times to use this weapon is… anytime! I guess. Try to land headshots, as it will kill your enemy way faster. But like I said, don’t use this a lot.

(I don’t know the name of this weapon, so I just gave it a name)

This weapon shoots lightning at enemies that will deal damage every 0.1 second!!! However, it is kinda weak and deals low damage. If you upgrade it, it will increase the damage a little bit, don’t think that when you have this weapon fully upgraded, you’re gonna be OP. If there is a weapon that deals a bunch of damage every 0.1 seconds, I don’t think that will be fair.

Best times to use it is anytime, this gun will deal the same damage, no matter the distance (Of course, if you land headshots then it will deal more damage).

A short range what will shoot fire that will deal damage over time. It can deal more when upgraded. It can shoot fire at the floor as well. However, you can damage your self from that fire.

We all know what mines can do, mines are in a lot of video games. But, you can upgrade mines in this games and you can place them in roofs and walls, not just floors. (unlike other games).

I highly recommend the to get the upgrade that the mine laser is hard to see, b/c it’s very easy to spot a mine without the upgrade.

I honestly don’t like this weapon, It’s kinda hard to get kills with this weapon, but anyway, this weapon fires tiny grenades (yet a little powerful) that bounce and explode.

They do deal quite a lot of damage, but this weapon I would say it’s mostly for people that have good aim. (unlike me XD)

This gun is the most powerful weapon in the Soldier’s Inventory. I would not even call it a weapon, it’s more like a “super-weapon”. It’s even OP without upgrades! (Sadly it has VERY low ammo)

This super-weapon fires some sort of blue electric ball that takes away up to 100hp. It goes slow, however, but in the upgrades you can make them go faster. Also, be aware that the Gauss Gun can stop these by shooting. (with the Gauss Gun upgrade).

Best times to use them is when facing a tank, b/c they have so much armor, the super-weapon might not instant kill them but it will deal a lot of damage to them.