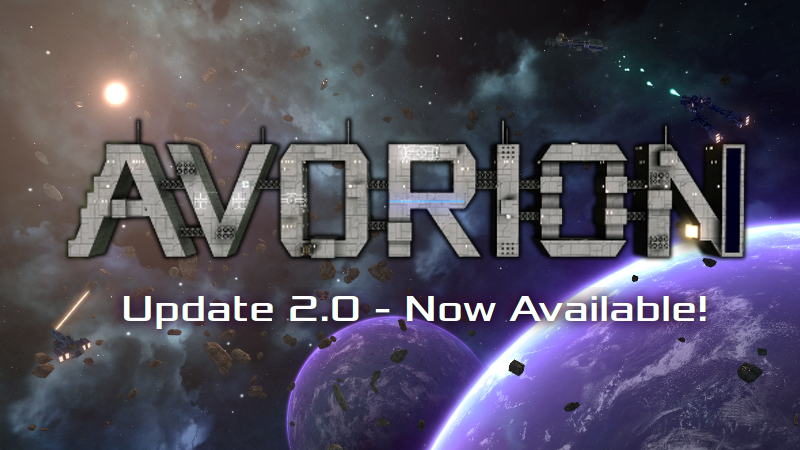 For Avorion players, this guide looks at what it takes to craft your favorite turret, be it from loot, research, or storebought. Also included are general tips on cost saving measures and how to buff factory blueprints so you can get the most value from your resources and credits.

If you’ve played Avorion for awhile, there’s one or two turrets that just make you want to go “Wow, I’d really like more than just one of those.” Luckily, there is a way to do just that, provided that you’ve done a bit of exploration of the faction space and have a fair amount of credits to boot.

Most turrets within the game can be crafted from blueprints at a Turret Factory which most factions have a least one floating around their region of space. Many of them also come with Turret Factory Supplier stations where you can buy many turret parts to go through with the crafting.

Note, I do say that most turrets can be crafted. A number of special turrets called “Red Text” items can not be blueprinted, such as the EXPLOD-3Y AOE True Bolter. These turrets often have unique traits (often visual) that can’t be reproduced by the Turret Factories, but they can be dismantled into parts or fed to the research AI (more on that later).

But for now, lets start into the basics of turret crafting.

Assuming that you’ve found (or built) your first turret factory, dock to it and access the factory menu by clicking on the “Build Turrets” option. This should bring up a menu similar to the one shown above.

The Title bar shows you the tech level of the factory. The factory is only able to build blueprints that have a techlevel *at* or *below* the tech indicated here. If, for example I had a Tech 37 blueprint in my inventory, I would not be able to build it at this factory since it is only Tech 36. Should you find yourself in a similar situation (blueprint tech exceeds factory tech) your only recourse is to travel closer to the core.

The inventory grid is similar to the other inventory grids, and has options to sort by tech, dps, dps/slot, etc. in addition to the custom filter. This grid shows either the Factory Blueprints or the blueprints from your inventory depending on what you selected in the dropdown box mentioned earlier.

Selecting a blueprint will then show a parts list, the cost to make it, and a popout menu that shows you the stats of the turret to be built.

Turret parts are goods that can be bought at the Turret Factory, Turret Factory Supplier, other stations, or salvaged at a scrapyard by sacrificing other turrets. You can also get them from a Procure operation from captains (more on this in Advanced Turret Crafting).

Finally, turrets have a Manufacturing Cost that is calculated based on the rarity of the blueprint and the relations you have with the owning faction (better relations = less cost). The monetary value in the turret popout is the base price of the turret should you sell (or theoretically buy) the turret elsewhere. 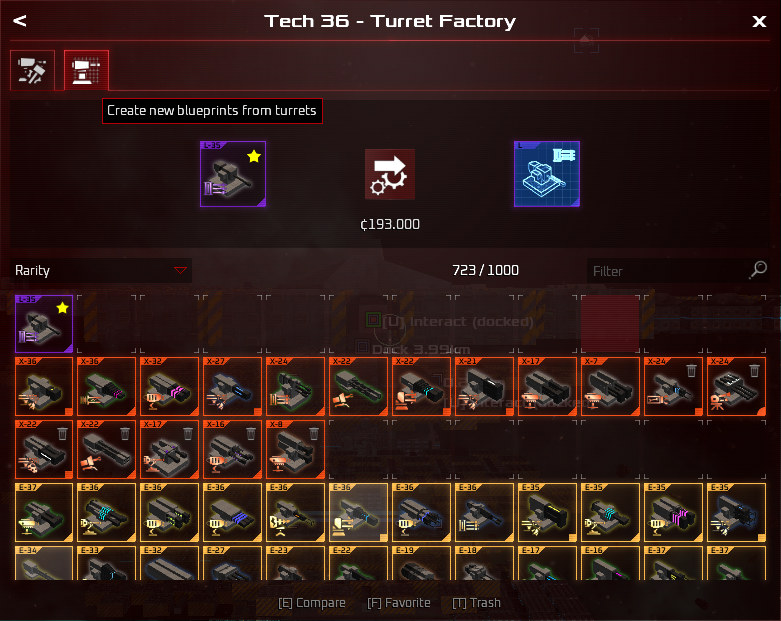 Now that you have the basics of turret crafting under control, this section goes into how you can start optimizing those mechanics to get the best turret.

Assuming that you are looking for a stronger turret, you can craft turrets that are stronger than your average loot drop at factories. This is done by increasing the parts cost of Factory blueprints to the maximum and seeing their effect on the turret stats popout.

If you’re trying to shop for turrets better than what you currently have, you can compare turrets in your inventory (mouseover the turret and press E) to the factory blueprints. The comparison popout will show you the difference in the baseline stats of the factory blueprint, but you can finagle the menus a bit so you can see the buffed stats popout at the same time as the comparison popout like so:

Note that blueprints that you have in your inventory can not be buffed .

If you already have a kickass turret and want more of them, you can do so in the second sub-menus of the Turret Factory’s Build Turrets menu, as shown in the opening image. This will consume a turret within your inventory and give you back a blueprint, at the cost of some credits. The conversion cost seems to be loosely related to the type of turret as well as its rarity.

Blueprints crafted from turrets have the interesting quirk in that their parts cost is baseline. You can exploit this quirk to get turrets offered by factories at a cheaper parts cost by building one of the Factory Blueprint turrets at max buffed stats then converting the result into a blueprint. The manufacturing cost is still the same, however.

You can get free parts by salvaging junk turrets at a scrapyard. The “Type” filter is especially useful when you’re looking for parts for a specific type of turret (such as a rocket launcher).

You can also buy parts quickly by using captains to look for them instead of trying to salvage parts from similar turrets (example, scrap laser turrets to get laser turret parts) by sending the captain out on a Procure mission. It is recommended to use a Merchant captain when doing so, because they can get often find better deals on parts and at reduced cost. Merchant captains can also procure goods that other captains normally can’t, albeit at a higher cost.

Smuggler captains, although able to procure parts that are unavailable, are not as useful because stolen goods won’t be accepted by the factory.

**And finally, rather than trying your luck at various turret factories, you can try researching them. Researching turrets behaves similarly to researching subsystems in that you can’t combine “traits” of different types of turrets, but you can increase the rarity and dps to a degree.

The type of turret produced by research (Chaingun, railgun, cannon, lightning gun, etc.) is randomly selected between the reagent/input turrets. Thus, to ensure that you only get a chaingun turret out from research, make sure that all of your input turrets are also chainguns.

The material tier and number of slots the turret takes up seems to be also randomly selected from the input turrets, favoring the higher tier and heavier slot counts. It is easier to go up a material tier or slot count than it is to go down.

Special traits, such as “Plasma” or “Electric” and buffs such as “+5% damage” are also randomly applied to the product turret according to its type. Neither appear to be selected from the input turrets.

Tech level is almost always increasing after each research attempt.

“Success” attempts don’t appear to significantly buff the baseline stats of turrets, aside from the fact that they are *usually* better than their input turrets.

Thus, It is recommended to shop for turret blueprints at turret factories since the research in 2.1 doesn’t let you selectively mutate turrets into something stronger than what can be buffed at a turret factory.

That’s all we are sharing today in Avorion Turret Crafting Guide, if you have anything to add, please feel free to leave a comment below, you can also read the original article here, all the credits goes to the original author z64555