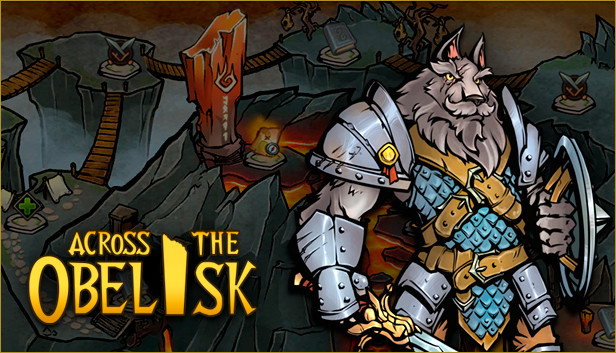 For Across the Obelisk players, this guide is about unlocking all heroes with a short description of their general play-styles.

The 4 character icons in Act 1 start quests to go somewhere and win a certain fight to unlock that character. Accept their quests and head to the [?] in the corresponding portal.
Character icons on the map after Act 1 may require an item from an earlier event to be given to them to unlock.

Magnus is a versatile mercenary with high speed, capable of inspiring his team while finding weaknesses in the enemies.[/i]

Magnus is one of the 4 starting heroes.

Heiner is a slow but reliable sentinel, built to last with strong defense and powerful counter-attack lasers.

Unlock: Accept their quest from the Crumbling Tower node in Act 1.
Beat Act 1 and choose the Reddish Portal.
Enter the gates of Kuzam’Dhar and clear the enemies inside.

If you take the middle path, you must Combat the goblins at the Goblin Caves node or you can not go up to the quest location.

Grukli is an offensive berserker that gains fury while bleeding both the enemies and himself.Unlock: Get a Big Fish quest item from the Small Lake node in Act 1.
Clear Act 1 and choose the Greenish Portal.
Give Grukli the Fish at Waterfall Ledge.

Unlock: Choose the Blueish Portal when clearing either Act 1 or 2.
Accept the quest from her at the Grove node.
Continue through the acts and defeat the Dawn and Dusk combat in Act 4.
Take the top path to the Garden node and Plant Ylmer’s Seed.

Andrin is a skilled ranger with both ranged and melee strengths. He is the fastest hero, able to mark his enemies for death.Andrin is one of the 4 starting heroes.

Thuls is a deadly assassin that focuses on Poison and Stealth to eliminate his foes.

Unlock: Accept his quest from the Water Mill node in Act 1.
Clear Act 1 and choose the Greenish Portal.
Head down to the Spider Lair and beat the boss at the end.

Sylvie is an Elven Archer with keen sight for weaknesses in her enemies.Unlock: Take the bottom path to the Forest Glade node in Act 1.
Gain the Moonstone either through the Combat or Steal options.
Clear the Act and choose the Blueish Portal.
Go to Sylvie at the Owl Guardian node and Give her the Moonstone.

Gustav is a rock minstrel that can support allies or cut through enemies with sharp Song Spells and hidden weapons.

Unlock: Clear Act 1 and choose the Greenish Portal.
Head to his icon on The Lonely Rock node and Accept his quest.
Finish that Act then head to the Blueish Portal.
Reach the Mansion node and pick the Left Wing option.

Evelyn is a versatile elementalist that can use any element to her advantage and enchant her allies.Evelyn is one of the 4 starting heroes.

Cornelius is a powerful pyromancer, setting everyone ablaze with many burn and raw fire damage options.Unlock: Accept his quest from the River Bridges node in Act 1.
Clear Act 1 and choose the Reddish Portal.
Head to the Cult Temple node on the far right and beat the fight.

Wilbur is a gnome loremaster that uses his knowledge of electricity to energise his team.

Unlock: Accept his quest at the Rest Area in the Reddish Portal
Continue until Act 4, then take the Top Path to reach the Library
Choose the bottom option Continue to take the book about ancient technology

READ:  Across the Obelisk Wining Builds for Starting Team

If you take the middle path in Reddish Portal, you must Combat the goblins at the Goblin Caves node or you can not go up to the quest location.

Zek is a Warlock, specialising in Shadow magic and Curses.Unlock: Go to the Main Road node in Act 1.
Select the Profane option to gain the Jeweled Key.
Clear the Act and choose the Blueish Portal.
Head to Zek at the Sewer Outlet and Give him his key.

Reginald is a blessed healer with high raw healing output and increased holy damage.Reginald is one of the 4 starting heroes.

Ottis is an indirect healer that can shield allies to prevent damage and apply sanctify on enemies that heals allies when hit.Unlock: Accept his quest from the Isolated Chapel node in Act 1.
Head up to the Bandit Camp at the top of Act 1 and fight Yogger.

Malukah is a voodoo witch, experienced in dark magic, curses and regenerative powers.

Unlock: Enter the Suspicious Hatch node in Act 1.
Clear the mini-dungeon and Fight Belphyor, the boss at the end.
Clear Act 1 and proceed through the Greenish Portal.
Buy a boat to her shop and give her Belphyor’s Horn(Costs 1000g)

Nezglekt is a healing Prophet, with mental powers and second sight.

Unlock: Visit The Stargazer at Riverside Camp in Act 1 and take either divination.
Clear Act 1 and proceed through the Reddish Portal.
Take the middle path to the Campsite and agree to carry the item until Act 4.(replaces an accessory)
In Act 4, follow the bottom path to the Airship

The Riverside Camp green event can appear, stopping you from starting the unlock in Act 1.

That’s all we are sharing today in Across the Obelisk Complete Character Unlocks Guide, if you have anything to add, please feel free to leave a comment below, you can also read the original article here, all the credits goes to the original author Otaku Oblivion