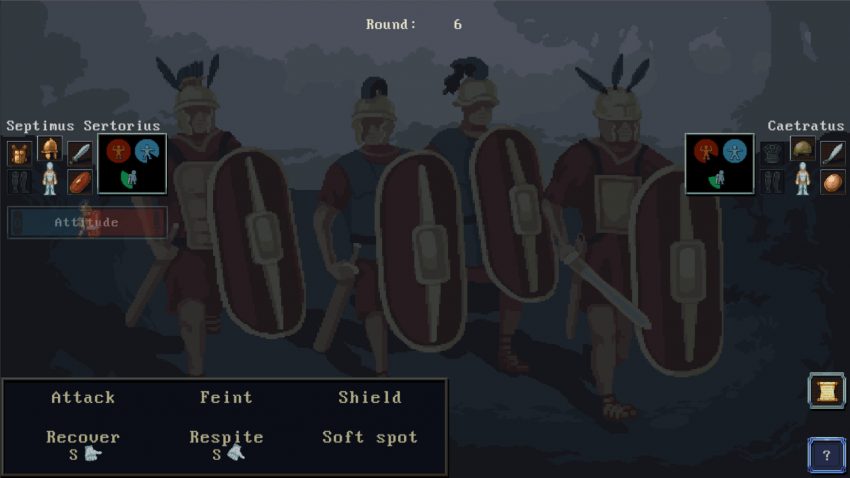 This game is fun, and actually has quite a bit of nuance to it in intuitive form. But for some, the first hour can cause frustration. Here are some very basic tips to help a new player get on with it…

1. You are not Maximus, General of the Armies, Savior of Rome. So, don’t act like it. For an average legionary, holding your place in the line, surviving the campaign, and maybe retiring as a junior leader is a pretty reasonable goal.

Things like volunteering to be first up a wall, or to fight heavily armed regulars, or challenge a leader to single combat, are all very risky. You may (will) die. However, the game never forces you into a suicidal situation. If you’re in one, you probably did it to yourself.

2. Skills pay the bills. Specifically, sword, shield, and javelin. No matter how clever your strategy, or how statted out a roll you got, you cannot overcome being inept with a blade and shield. As the achievement title implies, the “average professional” has about 50 sword, 50 shield skill. Which means fighting regular troops (like Libyans) if you have less than that is going to be quite hard.

So train often. Just don’t keep it up after a morale hit. Refresh, then get back at it.

3. Stance matters. Nearly exponentially. Unless there is a clear mismatch, both you and the enemy will struggle to land blows on an equal foe who is fully ready. It can happen, of course, but you don’t want to rely on it…you want to open up your opponent before you commit. And avoid being opened yourself. Opening happens via:

Missed attacks. This is the most obvious one, and why taking. 40/60 shot is a bad idea. You won’t just probably miss, you will be far more vulnerable to a counterattack, have virtually no chance to land another attack until you recover, and will waste rounds trying to recover. If the enemy misses, so much the better.

Feints. These are low risk, but high fatigue, attacks that can open the enemy stance up without potentially losing your stance. Besides being an offensive tool, they are great defense tools as well. If you open an enemy’s stance, he will often try to recover. Which means even if the e my recovers and you don’t get to convert the opportunity, a successful feint means he didn’t get to swing at you. A surprisingly successful way to keep superior opponents at bay.

Shield bashes. High risk, high reward. If they hit, you will almost certainly be in a position to butcher even superior enemies. If they miss, you will be very exposed. Best used when you are sure of connecting, or sure your enemy needs to regain his stance anyhow.

Chaining it all together: your odds for landing anything – attack, feint, shield bash – get better the more stance difference between you and them. So, you can use one to lead into the other until you are ready to stab a gladius into the other guy’s groin. A typical chain might go

Enemy miss > you quick feint > enemy fails a recovery > you either feint heavy or shield bash > murder him.