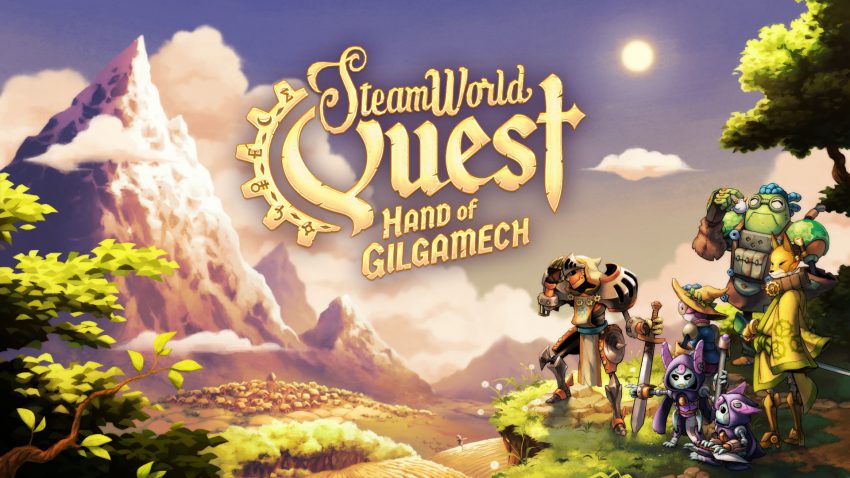 This is a brief guide to all of the achievements in game SteamWorld Quest: Hand of Gilgamech. Hope it can help you!

These achievements are guaranteed to unlock when you just play the game and finish the story line. Note that there is no achievement for different difficulty in this game. Thus, feel free to play on whatever difficulty you like. You can also switch difficulty during play.

A Form of Meditation?
Recruit Orik.

Two Birds With One Stone
Defeat Captain Canary and the Narcassian Dragon.

A Tree Whose Hungry Mouth Is Prest
Defeat the Teras Koloss.

How The Mighty Have Fallen
Defeat the Dark Lord.

The Bigger They Come
Defeat Mechathiranos.

One With the Matrix
Evade attacks 50 times.
Equip a hero with accessory Zephyr Cape from Chapter 11 treasure chest and you’ll get it eventually.

Dynamic Duo
Perform 100 Tag Team Combos.
There are some cards that have team combos. The ones I used most are Galleo’s Team Repair, Orik’s Find Your Center, Armilly’s Execute.

Like A Surgeon
Heal a total of 50,000 points of health.
Just keep Galleo in the team and use his healing cards as well as his hero chain card.

Cooking With Charcoal
Deal a total of 100,000 Fire damage.
Use Copernica’s fire cards.

High Voltage
Deal a total of 100,000 Storm damage.
Orik is pretty good at storm damage. With his Fuji Mask from One With the Wind card, even his physical damage will convert to storm damage.

Winter Is Coming
Deal a total of 100,000 Frost damage.
Use Copernica’s frost cards. Galleo can do some frost damage too.

Play Around
Change a hero’s deck.

How To Spend It
Buy an item from the traveling merchant.

So It Begins
Craft a punch card.

Destiny Is In Your Hands
Craft every punch card available at the mysterious merchant’s.

Push It To the Limit
Fully upgrade a punch card.

Refer to the IGN guide for the locations of treasure chests in each chapter.

It’s A Secret To Everybody
Find a secret room.

Get It Off Your Chest
Loot 10 treasure chests.

Potent Potable
Use a recovery item in battle.

We Will All Go Together When We Go
Scrap three enemies with a single card.
Use Copernica’s Flame Wave card at any groups of 3 or more monsters. One easy method is during the Teras Koloss boss fight. When the tree boss summons 3 twigs, use the AOE skill to one shot all of them. They are all weak to fire attacks.

All For One
Spend 10 Steam Pressure on a single card.
Use strike and upgrade cards to build up steam pressure (SP), then spend all SP on any X skill cards (e.g. Orik’s Cyclone Slash, Galleo’s Overcharge).

Your Green Savior
Heal a hero from less than 5% health to full with a single card.
Key card: Galleo’s Overcharge + Miracle Worker. Try to lower one of your hero’s health to <5%, while building up 5+ SP, then use Overcharge to heal the hero while protecting him/her with Damage Shield from Copernica. Another method is letting the enemy kill one of your team member in one fight. Then do the above method in the second fight, since 1 health will definitely <5%.

Fox Fingers
Play six cards from your hand in one turn.
You need 4 things here: Orik’s Bushido card, Inspiring Grace card, any Orik’s weapon with hero chain card Haste, and equip him accessory Executioner’s Hood. Try to redraw cards until you got both cards in your hand and any other one Orik’s card, while try to lower one enemy’s health so that Orik can kill the enemy in one turn. Then perform the kill and hope RNG favours you.

Dogged By Misfortune
Inflict Burn, Bleed, Poison and Despair on the same enemy.

Feeling the Rapture Grow
Deal 20,000 or more damage with a single hit.
Debuff of defense on enemy + buff of offence on hero + offensive X skill with 10 SP.

Plague On Both Your Houses
Have 12 instances of negative status conditions affecting foes at the same time.

We Didn’t Start the Fire
Defeat a certain boss before it can use Hell’s Tokamak.
Kill the last boss Mechathiranos in one turn after teleport to the final phase, or use Flinch to drop the card (need conform)?

There are several tournaments in Colosseum of the Cursed with different themes (both enemies and rules). You will get the achievement after beating the one listed in the achievement description. Each time you need to beat 5-7 consecutive waves of enemies without break (i.e. you’re always in battle).

Are You Not Entertained?
Complete the Abyssal Cup.