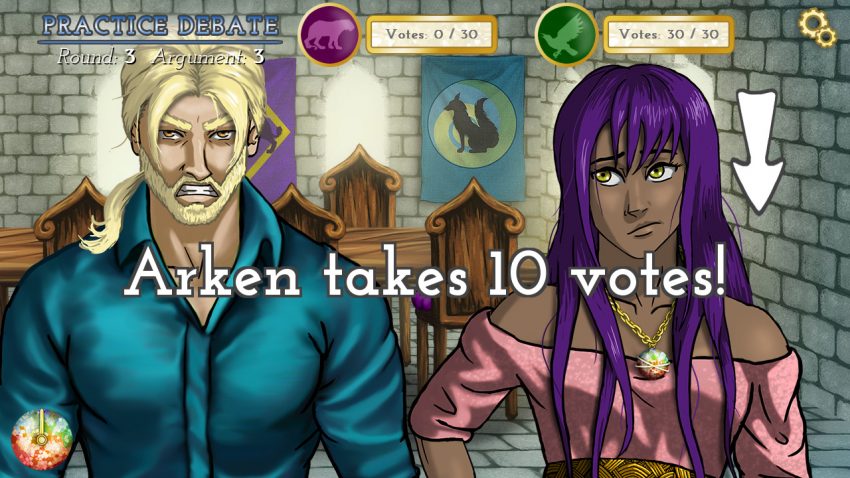 Walkthrough for 100% achievements and how to reach various endings.

There are several achievements that can be done in any playthrough, but I sorted most of them into the sections where it’s most convenient to get them. The only remaining ones are these two:

Landslide Victory
Win a debate with opponent’s score at zero

This is the easiest achievement in the game and you will probably get it in your first or second debate. Simply choose to debate with whatever your highest stat is. If the arrow points up, choose high numbers. If the arrow points down, choose low numbers. The debate ends automatically if someone reaches 30 votes or more, otherwise it ends after Round 4.

If you save the best number for last you are more likely to wipe your opponent’s score to zero at the end.

You can set up the conditions for this one in any playthrough, but it’s obviously mutually exclusive with the achievements where someone else is crowned King or Queen so you should make a save before this choice and then you can reload.

To unlock this option, you need to win most of the debates. It seems like this option won’t appear if one House is dominating the house standings, in which case they’ll ascend the throne without a debate. So, make sure to support another house sometimes to stop one House from winning automatically.

Personally I got this option on my Kallias romance playthrough where my highest stat was green. The other candidate for the throne was Serafina. It’s quite easy to keep Serafina in the running as her House starts out near the top anyway.

For this playthrough, focus on raising the Mallion (green) statistic to at least 50% of your total. Choose another stat to raise as a backup for when green choices aren’t available.

For Lack of a Better Word, Good
Accumulate 10 points with Mallion, the god of greed and wealth

For this playthrough, focus on raising the Picard (purple) statistic to at least 50% of your total. Choose another stat to raise as a backup for when purple choices aren’t available.

Further Regions of Experience
Accumulate 10 points with Picard, the god of pleasure and sensation

The Velvet Throne
Make a king out of Kendal Terrace

For this playthrough, focus on raising the Demetral (blue) statistic to at least 50% of your total. Choose another stat to raise as a backup for when blue choices aren’t available.

The Greatest Thing You’ll Ever Learn…
Accumulate 10 points with Demetral, the goddess of love and fertility

The Rightful Heir
Allow Serafina Elborn to become the next queen

Roza has an additional achievement for which you will need to make an alternate save file when instructed and reload.

Aside from that, you know the drill – raise the red stat most and choose a secondary stat to raise too.

Wolf & I
Accumulate 10 points with Belazar, the goddess of wrath and war

The War Queen
Put Roza Pajari on the Darzian throne

Reload the save you made earlier and choose to indict Roza. It does not matter whether you win the debate or not; Odell will reveal the secret oath and subsequently die at the beginning of Chapter 4, giving you this achievement.

Arken’s romance is a little different as he’s not a candidate for the throne and you can’t choose to visit him like the other characters. I don’t think it matters who you decide to support or what stats you raise for the most part, but I chose to support Serafina.

This may be a good time to get the right conditions for The New Reign achievement (make yourself queen) if you haven’t already. See the “Any playthrough” section again if you need tips on how to get this option to come up.

Benefits of Experience
Begin a romance with your trusted adviser, Arken Jeridar

To get these two achievements, do the following:

Lorenzo is another different one. This is the best time to get the achievements for kissing Lorenzo, revealing the true murderer, and defeating a god in a debate, but you might have gotten those earlier as they don’t prevent you pursuing other romances or endings.

First of all, choose a primary stat to raise (I suggest green or blue because of their abilities). You need to win a fairly difficult debate later and the stat you’ll use in said debate is whichever is your highest. The opponent uses purple. You can also use purple, but I think green or blue is easier because of the abilities.

Who am I Kissing Right Now?
Deepen your relationship with, well, someone…

Vengeance of a Sort
Find the true killer of Queen Belatrix

No Pleasure in Argument
Defeat a god in a debate

Achieve Lorenzo’s Ending
Complete your regency by reconciling with your mysterious ex, no matter who he might really be

These don’t have associated achievements but might be of interest if you enjoyed the story.
Romance Ending Variations

Some of the romance endings will differ slightly depending on who ascended the throne. For example, if you romance Kallias and he is crowned King, he will propose to Odell, but if Odell is crowned Queen, Kallias will hint at staying together and Odell will be the one to propose to him.

I don’t think it’s possible to be Queen and get Arken’s ending, as he seems to leave the castle no matter what happens.

If you accuse Lokke of the murder of Queen Belatrix, he will appear in the epilogue and announce his intention to possess Odell and discredit her by making her seem insane, thereby exacting his revenge. This seems to prevent you getting a romance ending instead.