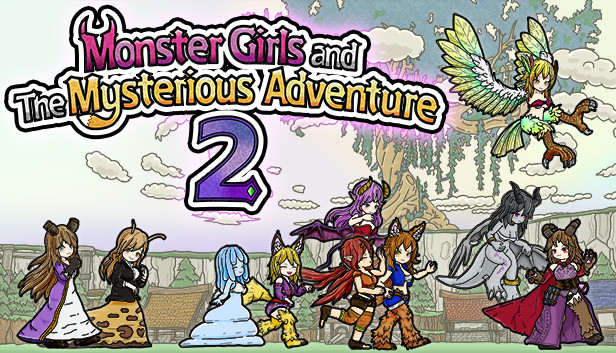 For new players of Monster Girls and the Mysterious Adventure 2, this guide will explain how to get to the keyboard controls section while using only a keyboard and not a controller.

When you first launch the game, you’ll have to wait a bit for it to load, and then it will bring up a window that tells you about the game’s auto save functionality. In the lower right corner, it will say “A next”, meaning, press the A button to continue. That’s intended as the A button on an Xbox controller, not the A key on a keyboard. If you’re using a keyboard, you need to press the Z key to continue.

After that, it will bring up a window that tells you that the game is in early access. As before, it says “A next” in the lower right corner. And as before, if you’re using a keyboard, you need to press the Z key to continue.

After that, it will take you to the title screen and start playing music. It will say “press any button”. I’m not sure exactly which keys will work here, but pressing the Z key for a third time will.

Unfortunately, the game seems to have a new bug that can make the title screen unresponsive, such that there isn’t any key that works when it says “press any button”. If the Z key doesn’t work, then you’ve been hit by this bug. Tabbing away from a game and then back may be what triggers it, but you won’t have to worry about that once you’re in the game. If that happens, then close the game (e.g., with Alt+F4) and restart it. This is a very recent bug that should hopefully be fixed soon. Regardless, you can get past that bug by pressing Z repeatedly after launching the game until the title menu appears.

That brings up a menu with options of “Continue Game”, “New Game”, “Environment Settings”, “Operation Settings”, “Language settings”, and “End”. You can change the highlighted option from this menu by using the up and down keys on your keyboard. Once you’re on the option that you want, press Z to select it.

If the game loads the wrong language for you, then “Language settings” will let you fix it. That’s second to bottom option, in case it gives you the wrong language of text. Once that is done, press X to return to the title screen.

Once you get the title menu working in a language that you understand, select “Operation Settings”, as this lets you see the game’s controls. This will start you on a page that doesn’t necessarily have what you want, but there are three tabs. You can switch between tabs by using the S and D keys. Press D once (or S twice) to get to the middle tab (“Key Configurations”), which lists the keyboard controls.

You can use the up or down arrows on your keyboard to scroll through the menu and see what all of the controls are. If you want to change any keyboard controls, highlight the relevant line, then press Z to bring up a menu that lets you change it. Press the key that you want in order to change it.

Once you’re at the Key Configurations menu, you can see all of the buttons that do things and change them to your liking. Changing the up/down arrows or the “decide” key and then forgetting what you set them to are the only ways to really break things here. If you change anything else and then decide that you don’t like what you changed it to, it’s easy to come back and change it back.

You can also access the Operation Settings menu from in-game by bringing up the menu (X is default), then selecting “Other”, and then “Operation Settings”. Really, though, once you get into the game, you’ll be fine. Getting past the title screen is what confuses people.

Message for the Developer

Having the game tell you to use a controller button that some players don’t have confuses people. It’s a real problem, and it’s leading to players who would have liked your game giving up, getting a refund, and occasionally leaving a nasty review. A game shouldn’t need an unironically written guide that explains how to launch the game and get past the title screen.

It’s also fixable by listing the keyboard key for the “Decide” setting (default of Z) in addition to the controller button on menus to tell people how to load the game. Please do that. You’ll get more sales, fewer refunds, and better reviews.

The title screen locking up is also a real problem. If you load the game and then press Z repeatedly, it seems to reliably load the title menu. Tabbing away from the game and back seems to make it lock up. This problem was added in the “mid-size” patch. Hopefully for later readers, this bug will have long since been fixed and I can remove references to it from the guide.

That’s all we are sharing today in Monster Girls and the Mysterious Adventure 2 Keyboard Controls Guide, if you have anything to add, please feel free to leave a comment below, you can also read the original article here, all the credits goes to the original author Quizzical