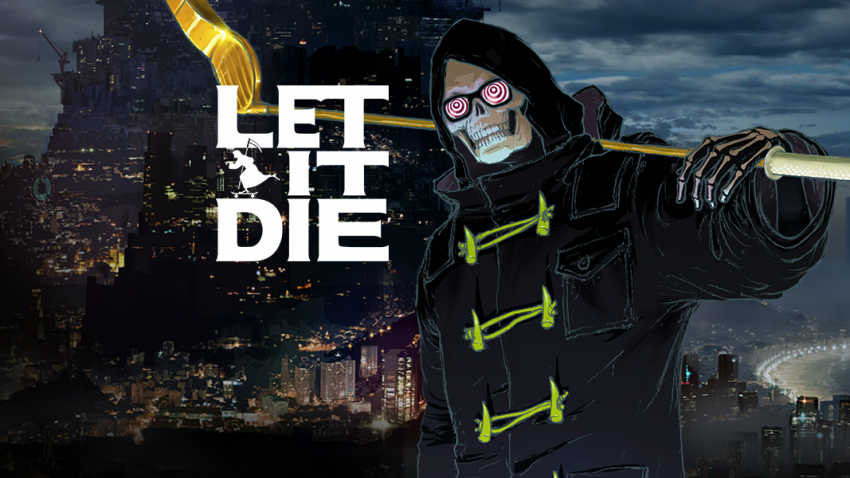 If you play LET IT DIE, this guide is a walkthrough of progress from nothing to the last boss for new players, let’s check it out.

Reason of Iron is the most recommended weapon, because of the extra dps from steam/fire(when tier 3), all boss is weak to blunt, long reach/ aoe damage, simple movement (forward hit), and most important… rage move! It create a wall of steam/fire that can damage and blind everything in front of you for about 5 second, this is one of the main reason why i able to run pass most of the floors and this is what can get you out of most pickle situation.

if you can get sword dancer set upgraded, Great! reason for that is almost everyone can get it from lost bag so is very easy to obtain, and one of the current most powerful set of armor atm, however it is very expensive to upgrade.

As for DIY coat, all veteran can agree it is best for climbing just because how easy it can upgrade for, defense and stats is decent, it is very cheap to upgrade compare anything other things, it has all element resist with only a small negative amount on pierce resist and defense you need to beat Taro. DIY pants optional.

PS: sorry i didn’t mention this before so i give it a small up date. Also mention same thing in the 33F-40F guide.

any question can ask in the comment since there no way for me to write down every detail in the progress. sorry is kinda sloppy for whoever want to get through the tier 2 fighter stage.

minor progress: 2 hours after i posted, i been grinding some TDM, and currently Plat 2 should be able to hit diamond by tmr when i try again.

decal: tank 20% hp, dumbbell 7% atk( you can buy it from mushroom lady), poison eater( using it to avoid taking damage from poison and healing youself) i got lucky in kc stew but you can get it when you obtain some bronze skillshroom from 11-20F and exchange from the lady.

went back to 16F able to locate jin die, pop 1 crushshroom, hide in the corner until Jindie teleport next to you near the entrance then hit her twice and she die.

run through 17, 18F melt everything like butter with Tier 2 iron, and stopped at 19F. ( Tier 2 iron should able to take down everything 11-20F like nothing. Reminder movement is very important in 11-20F since most screamer would carry a range weapon, when you see they about to shot run or roll side way to avoid damage, then go for it when they animation stunned)]

After able to get to 19F, way to 20F is a cake walk, but DO NOT misunderstand the meaning of cake walk it is very easy to kill everyone with Tier 2 iron +4 but you can still easily die in the progress if not be careful, there will be alot of fire/ electric trap on the way to thin out your hp/armor, with high platform area that would make you take alot of fall damage if you unable to jump over. right after 19F you would first have to get to 20F then go down to another 19F so you can eventually getup to the 20F with elevator with Jackson 20F boss. no preparation needed if you think you can power through it.

Eat a lifeshroom before heading in to ansure you dont die, once you in you will have to defuse 3 bombs on the map before able to face jackson, or you will die when the timer run out, for defuse the bomb you will have to go around the map and look for the bomb you will hear a noise increasing as you closer to it. once you defuse all 3 bomb jackson will be transform as you get close, so before that happen pop the toughshroom and damage shroom to buff up youself, and face an enpower jin die JACKSON. same thing but he will spawn some landmines and shoot laser beam that can go through object so as he tranform try to get to him quickly and hit him with the iron you should able to melt him like butter. then you on your way to 21F.

In the 20F+, really remind me of how difficult this game can be when you are lower tier fighter that have to go against the new power spike, everything is much stronger, tanker, and more … Hurt. map would be alot bigger and confusing with dead ends. so explore with the speed you comfortable with, or you will end up dead. Always beware the spear and the sword.

To go through these floor best thing is to gather some lifeshroom from 11F usually have 4-7 beast spawn, and some toughshroom, also be sure you have a fresh set of new gears ( best with slash/fire resistance) and few iron in hand. Also make sure you have enough coin to go around unless you have express pass, other than that you should good to go. 2 strategy can go through try to take fight 1 on 1 but it well wear out the iron heavy or RUN. so that’s what i did.

I manage to run through 21F to 23F however i ran to one of the dead end with alot of screamer and died. i recover from that by grinding more tdm, and get the fighter back and do it over again but this time i got the 23F elevator with silver lining of being dead. and now prepare to fight a tier of GOTO-9.

Perparation for GOTO9: 2 lifeshroom, 2 tough shroom, 2 red stingshroom/ crushroom for extra damage, 2 decayshrooms, 3 or 4 weapon of your choose( iron). 2 set armor with slash resist. at least 8k kc 4k up and down ele.

GOTO 9 will always spawn to the left side of the elevator so it is very easy to go to, before going in throw 2 decay shroom to the left side so GOTO9 won’t target you right away, eat the rest of the shroom ( 1 life, 2 tough 2 stingshroom) then go in, GOTO 9 will do one of the following, vomit( will make you slip unless you roll over it), rush to you and try to hit you or spawn a skeleton screamer to fight you, or jump and smash you.

rest just repeat, when he glowing red mean in rage and also a window for you to get a few hit in.

after you beat GOTO9, is time to go for 25F, 24F can be a bit confusing since theres a mini maze that have 5 or 6 screamer, so try your best and go through that and 25F would be some what gold, even if you die, you would able to get Tier 4 fighter. best is unlock elevator and go down.

as for me the time i went to 25F manage to run pass everything in 24F to 25F died half way because of a lighting rod charger( is special hater in different floor that drop bp), force to revive with dm, unlock elevator and found out no kc to go down and no armor in hand with nothing, manage to grind some screamer with fist and sneak around the map with 200 hp for half an hour finally have some kc to get to 11F and and rest is easy.

at this point, it is very hard to continues on climbing without better gear so i have to start grind more material to RnD before i keep on going. i only have T2 iron+4, T2 special force vest +2, T1 knight legging +1. And i strongly suggest for whoever new also keep on Rnd the gear you use until Tier 2 +4 or it would be very painful to even try to go through rest of it, best if you able to get it to Tier 3.

From 25F on is pretty straight forward:

Make sure you have your Tier 4 striker ready!

40F is where Taro are, I can’t do right away for 3 reasons: weapon, armor, and shroom.

For weapon, I recommend that you get iron upgraded to Tier 4 first, if not at least Tier 3 +4.

Reason being the extra dps from steam/fire (when Tier 3+), all bosses are weak to blunt, long reach/aoe damage, simple moveset (forward hit), and most importantly, rage move! It launches a wall of steam/fire that can damage and blind everything in front of you for about 5 second. This is one of the main reasons why I was able to run pass most of the floors and this is what can get you out of most pickles.

For armor, at least 1000 defense if you don’t want to get one-shotted (blunt resist will be preferred). I recommend sword dancer set or DIY coat.

If you can get sword dancer set upgraded, great! Reason for that is almost everyone can get it from lost bags so it’s very easy to obtain, and one of the most powerful set of armor atm. However it is very expensive to upgrade, especially Tier 4.

As for DIY coat, all veterans agree that it is best for climbing just because how easy it is to upgrade, defense and resist are decent, and it is very cheap to upgrade compared to any others. It has all element resist (only a small negative amount on pierce resist) and the defense you need to beat Taro.

As for shrooms, there are some ways to make the fight really easy (almost cheese):

2-5 guardshroom depends on how bad you at fighting U-10: Taro is basically U-10 but with more different moves and rng, this should save you from being dead.

2-3 umbrella rib/ transparungus: always nice to not be seen by a boss and you can get a lot of hits in without being hit.

2-3 cat eye/slowmungus: always great to be able to move while no one else can move.

2-4 lifeshrooms depends on how many guardshroom you have, since you don’t want to die.

12-15 red stingshroom: much easier to obtain then actual stingshroom and you don’t want to take more damage than you already would; crushroom doesn’t have enough damage buff.

max rage bar: if you don’t have enough rage, eat some mouseshrooms/yogashrooms before the fight.

These should make the Taro fight easier.

Taro: at the beginning of the fight, your inventory and currently equipped weapons and armors will be removed temporarily for you – but still MAKE SURE YOU HAVE YOUR ARMOR EQUIPPED AND THE WEAPON YOU NEED IN HAND (very important). This is also why you pop 12-15 grilled red sting shroom before heading in. YOU WILL NOT face Taro right away, it has 4 stages before Taro:

Taro Strat: pop a guardshroom right away when he spawned, and other shrooms should the need arise. REMEMBER to hit the tail, not the head. He’s basically U-10 with a few extra move.

Rotation: all attack is rng so pop a guardshroom first will ensure you not getting 1 shot. Pop an cat eye when the tail is reachable, hit a few times pop another one do it again, pop a guardshroom when about to run out, and repeat.

And welcome to the top.

That’s all we are sharing today in LET IT DIE 1-40F Walkthroughs for New Players, if there are anything you want to add please feel free to leave a comment below and we’ll see you soon.