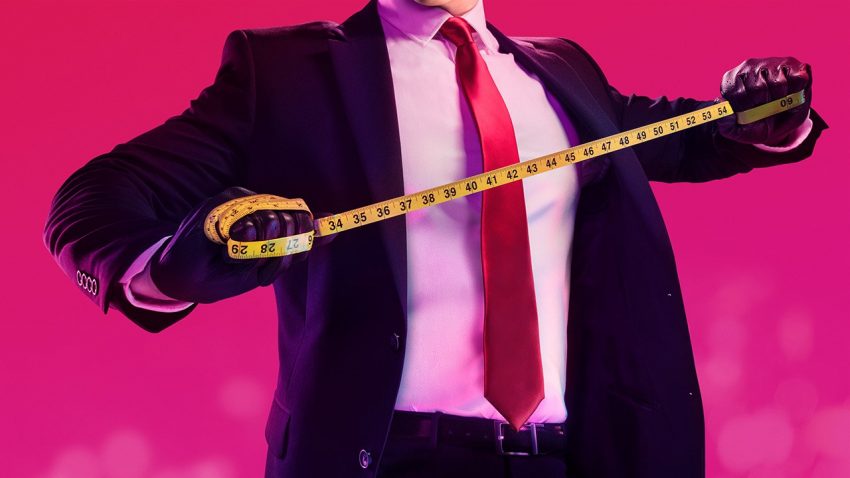 This is detailed guide for the HAVEN Island, Last Resort mission on the Maldives in HITMAN 2. Guide includes the method for completing a Master Silent Assassin Suit Only rating with Sniper Assassin, locations on the map, challenges with achievements to complete, various kill opportunities.

Overview of the HAVEN Island 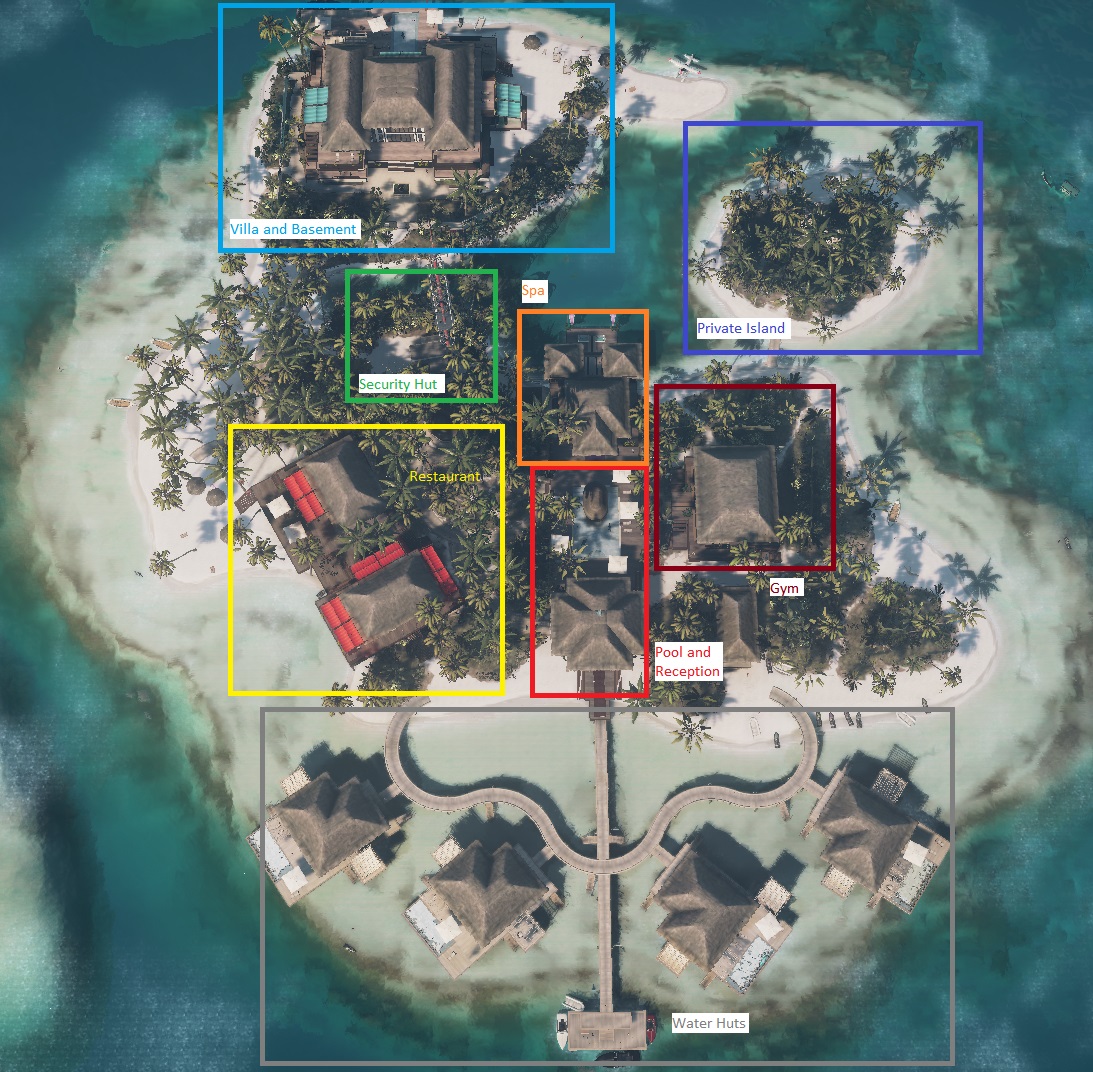 Each of the areas offer different opportunities for you to track your targets. The best disguise on this map is by far the Villa Guard – they are mostly seen in the Villa area and on the Private Island. One of them is also a Personal Bodyguard to the Steven Bradley. The easiest opportunity for getting this disguise is to knock down one of them near the Villa’s back door. You can also grab the Tyson’s bodyguard disguise completing the “Idle Hands” Mission Story – be aware, if you get the disguise before completing it, Tyson is an enforcer for this disguise. Both of these disguises have access to almost every part of the map without any suspicion except enforcers.

The Targets and Kill Opportunities

There are three targets to eliminate in Last Resort. Two of them (Ljudmila and Steven) are the roamers who walk on the different parts of the map. Tyson Williams walks only in his heavily guarded Villa full of guards and his personal bodyguard Mike. All of the targets can be seen from the Radio Tower above Security Hut (Sniper Assassin opportunity)

Ljudmila walks mostly on the public part of the HAVEN Island, she begins in the Doctor’s Hut and then to the Jason Portman. Since then she heads to the Restaurant to check her dish and heads to the Spa area through the Garden. In Spa she walks for a while to the restricted area, to talk by a phone. She is followed by a Resort Guard all the time. Kill opportunities for Ljudmila:

– A Lucrative Opportunity Mission Story (She will lean over a railing in Spa for a while, making her easy target for a push)
– The Shape Changer Mission Story (you can tamper the wire plug and water cooler near Portman’s laptop or open the trap door in his bathroom)
– Snapping the neck as a Spa staff
– Poisoning dish in the kitchen
– Poisoning her tiki drink near Spa in Water Bar
– Kitchen explosion in Restaurant
– Drowning her in Spa’s Jacuzzi with Steven (A Lucrative Opportunity and The Shape Changer must be completed without killing her)
– Poisoning ventilation in the basement after tampering the server racks
– Electrocution in the basement after tampering the server racks

Steven Bradley romas between the Gym and his Private Island. He also talks to the Snorkel Instructor about the missing keys to his Water Scootes (in fact there are two keys – first is in possession of Snorkel Instructor, second is located below his hut on the Private Island). His personal bodyguard has a Villa Guard disguise. Kill opportunities for Steven:

Tyson Williams walks only on the first floor of his Villa, watched by his Personal Bodyguard, Villa Guards and several Villa Staff. His loop is quite short and he visits a Cinema room, bathroom with broken Jacuzzi and Ljudmila’s bedroom in search for evidence. He is also visited by a Doctor (always) after 16 minutes and then goes to his private bedroom. Kill opportunities for Tyson:

All kill opportunities below

For this Silent Assassin Suit Only run you don’t need any additional equipment – Silenced Pistol, Coins to distract and Fiber Wire are enough. Even so, the coins and fiber wire do not need to be used at all, but coins might always serve as a proper distraction. As you start in the default location, move a little forward, jump to the water and shoot twice at Doctor’s Hut. Ljudmila will panic and run away strictly to the water – shoot her leg then, she will fall down drowning herself.Then head to the left part of the map, strictly to the pier outside the Villa. Peekaboo (stay in line of sight inside a trespass) for the tech guy near the BBQ – he will react and move to your position. Climb and distract the girl – take the keycard to the basement and move forward carefully. Find the secret ladder to the basement, from there get a screwdriver to tamper the server racks.Like in the movie, scare the two talking tech crew and tamper the first server rack (they can’t look at you while doing it). Proceed with tampering server racks, always the nearest one – after disconnecting the last fourth server rack, remaining targets will move immediately to the basement for manual reboot. Tamper the wire plug in the center of the room and destroy the recorder nearby. Once Steven and Bradley are in place, shoot the water cooler and leave the same way you came in. The airplane to exfiltrate is nearby on the beach.

This map has an obvious place to snipe all the targets – if you are lucky, you can snipe all of them in a quick succession. The best Sniper Rifle to use in such assignments is of course a Sieger 300 Ghost from Cheveyo Calibration (But you must have the Legacy S1 + Patient Zero content), otherwise the Sieger Tactical is the second the best choice. You can start with a Sniper Rifle hidden in a briefcase or in Agency Pickup, but time can be really important here. Move carefully to the center of the map with Security Hut and distract the Resort Guard using a coin. Distract him in such place where he will not be visible for a camera or other NPCs – take him down and get his disguise together with Resort keys. Open the gate, use the ladder and climb to the top of Radio Tower.Ljudmila can be picked during her talk with Jason Portman or on her way to the Restaurant. In case of Bradley he is hidden behind the Gym walls or the trees, he is vulnerable on his way to the Private Island. Tyson Williams can be removed during his visit to the bathroom, overlooking the bath tub repair, or while he is using the binoculars to observe Ljudmila. Remember to eliminate all the targets in short succession, otherwise guards will storm your position, making your escape impossible.

There are total of 17 disguises to collect:

Ocean Of Knowledge (8 Intel to gather) and Pirate’s Treasure

For these Challenges we have to find 8 Intel items and open the Pirate’s Gold. Ocean of Knowledge unlocks after finding the following items (locations are in brackets and on the map):- Stolen USB (locker in the Basement below Villa)
– HAVEN Internal Report (on the Manual Reboot Panel in the Basement, the place where all 3 targets gather to restart the server)
– Note from Ljudmila to Mr. Rieper (Shark Hut, on the bed)
– Any of the 11 HAVEN Pamphlets
– Water Scooter Keys (Get it from Snorkel Instructor or below hut on Private Island)
– First part of the treasure map (Security Room in the Gym)
– Second part of the treasure map (Get it from the Captain in the Restaurant)
– Third part of the treasure map (In the bottle outside the Villa)You can undig the treasure without the map, it is located on the Private Island, few steps away from the Water Scooter Keys. You must get the shovel for it, you may find few around the map:
– on the stairs when going down to the Villa’s Basement
– near the Security Hut
– in room with gas pipe below the Restaurant 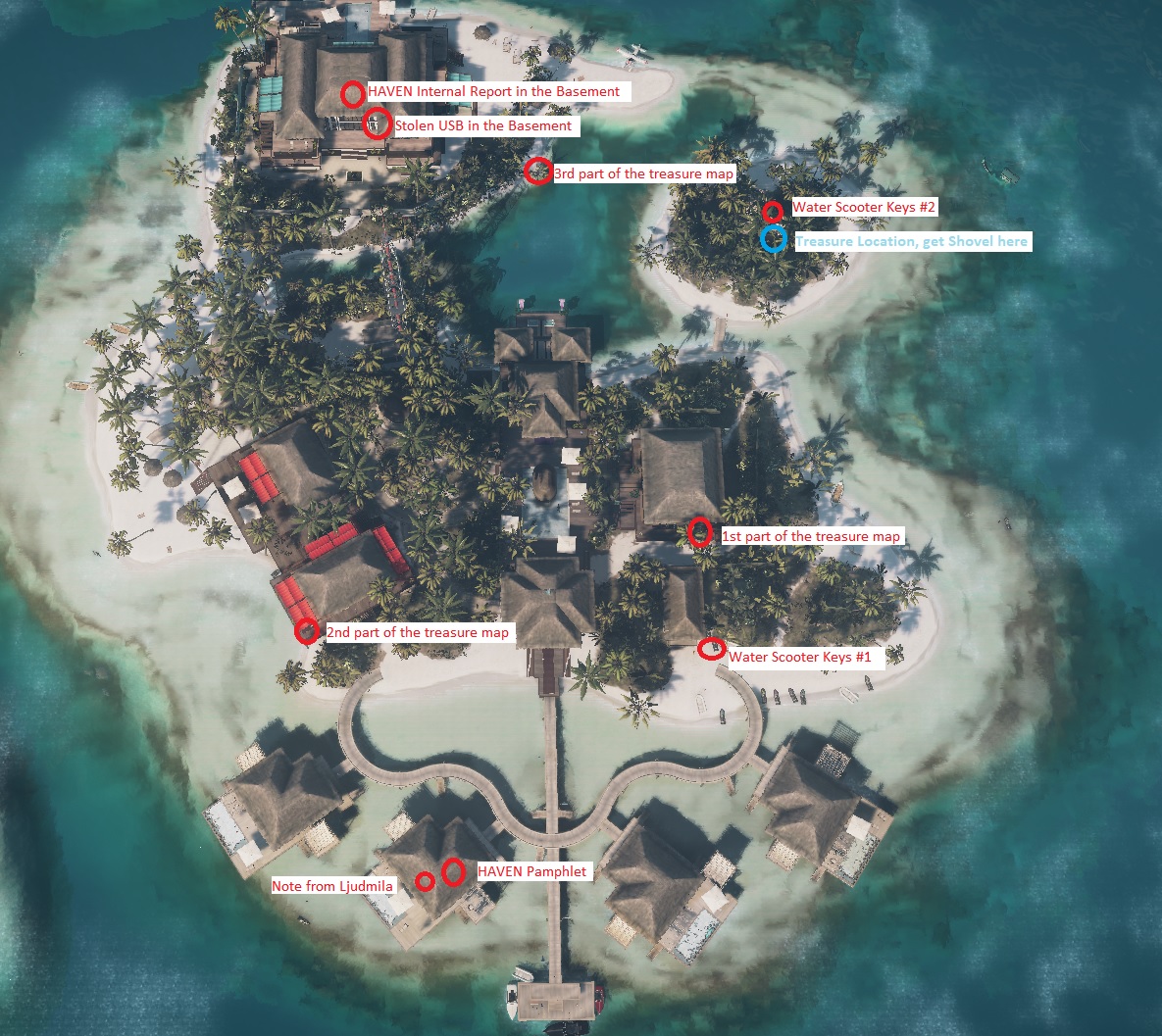 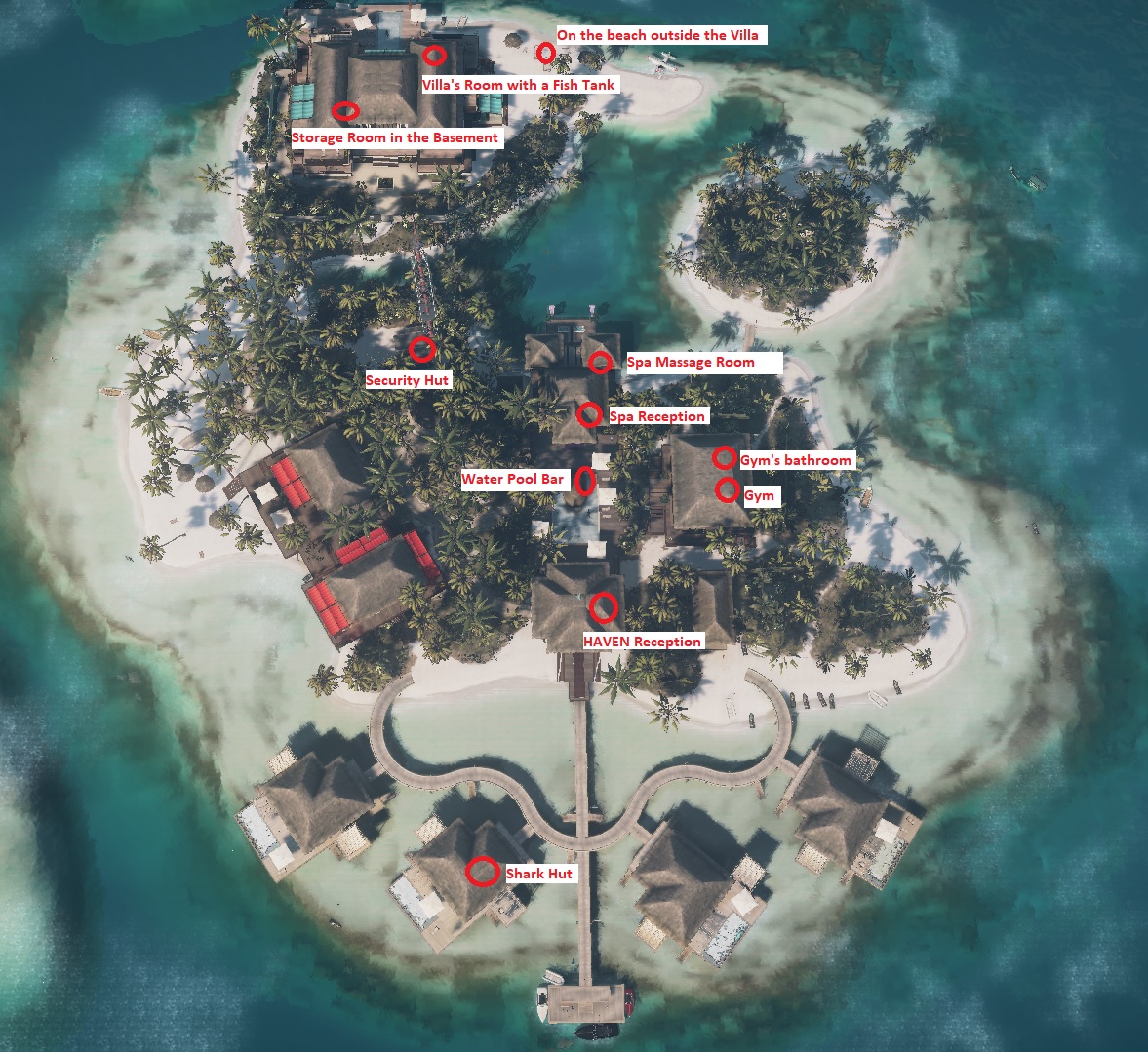 Quite long challenge to complete, as always you will better equip yourself with a proper disguise like a Villa Guard to destroy all 22 Surveillance Cameras on the map. A Silenced Pistol is mandatory for this (or even a Krugermeier). 12 cameras are on the metal poles in pairs (six metal poles), placed not so far from each other. 5 cameras are in the Basement area. Locations below:- two cameras near the backdoor to the Villa
– two near the main entry to the Security Hut
– two at the rear of the Security Hut, close to the Spa
– two between Spa and Private Island
– two on Private Island
– two between the Private Island and Gym
– one above the door below the Restaurant
– one near the stairs to the Gym
– one on the tree next to the Restaurant
– one above the cleaning servants outside the Villa
– one outside the Villa’s cinema
– one in the Villa’s Secret Room
– one outside the Secret Room on the stairs
– one near the Server Basement’s kitchen
– one above the storage room’s in the Server Basement
– one above the guards near the screwdriver in Server Basement 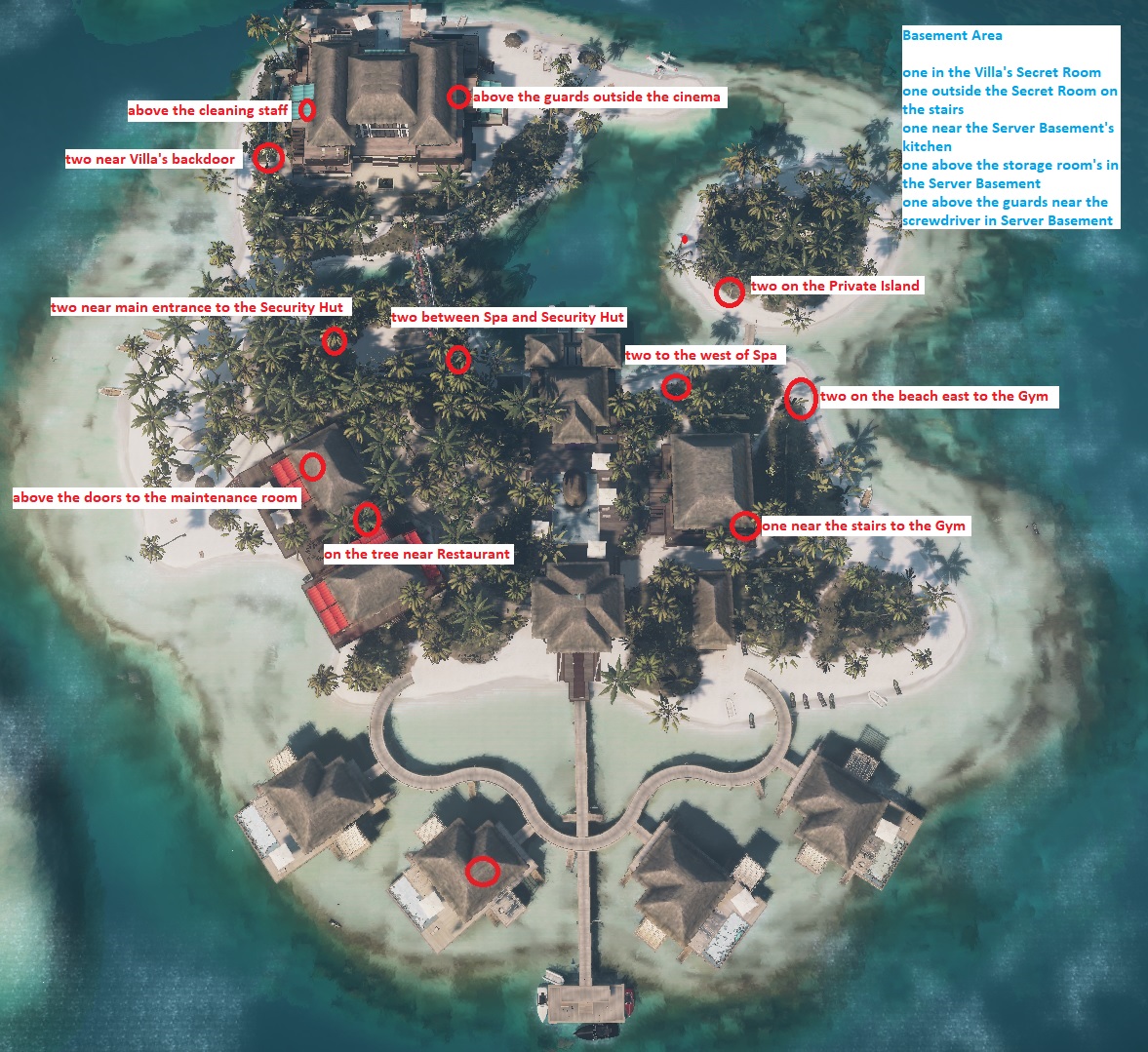 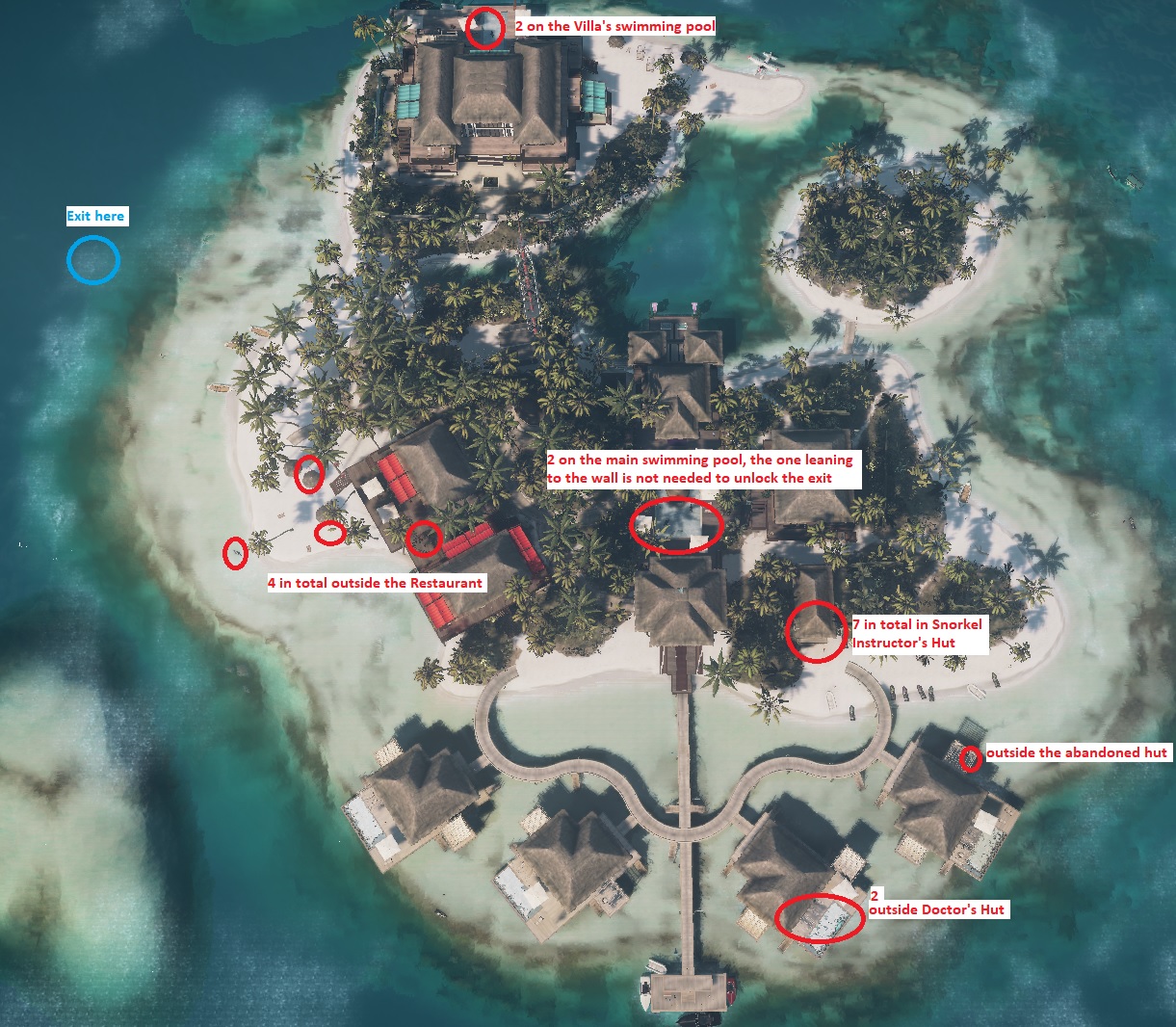 For this Achievement the Sniper Rifle is mandatory, so bring your Sieger Ghost for this one, or at least a Tactical variant. The weather also has to be changed, so you can wait 50 minutes for it or eliminate at least two targets. Four of the golden skulls are placed outside the playable area, so a good zoom is needed here. Locations below, together with a map.- Shark Hut’s Bathroom
– Plane outside the default starting point
– Island outside the Restaurant
– Radio Tower
– Security Room in the Gym
– Resort Bar in the garden
– VIP Area in Spa
– Two in the Villa’s cinema
– Tyson’s bedroom
– Villa’s Fish Tank
– Bar on the Private Island
– Sunk ship outside Private island
– Yacht outside the Villa, near Speedboat exit 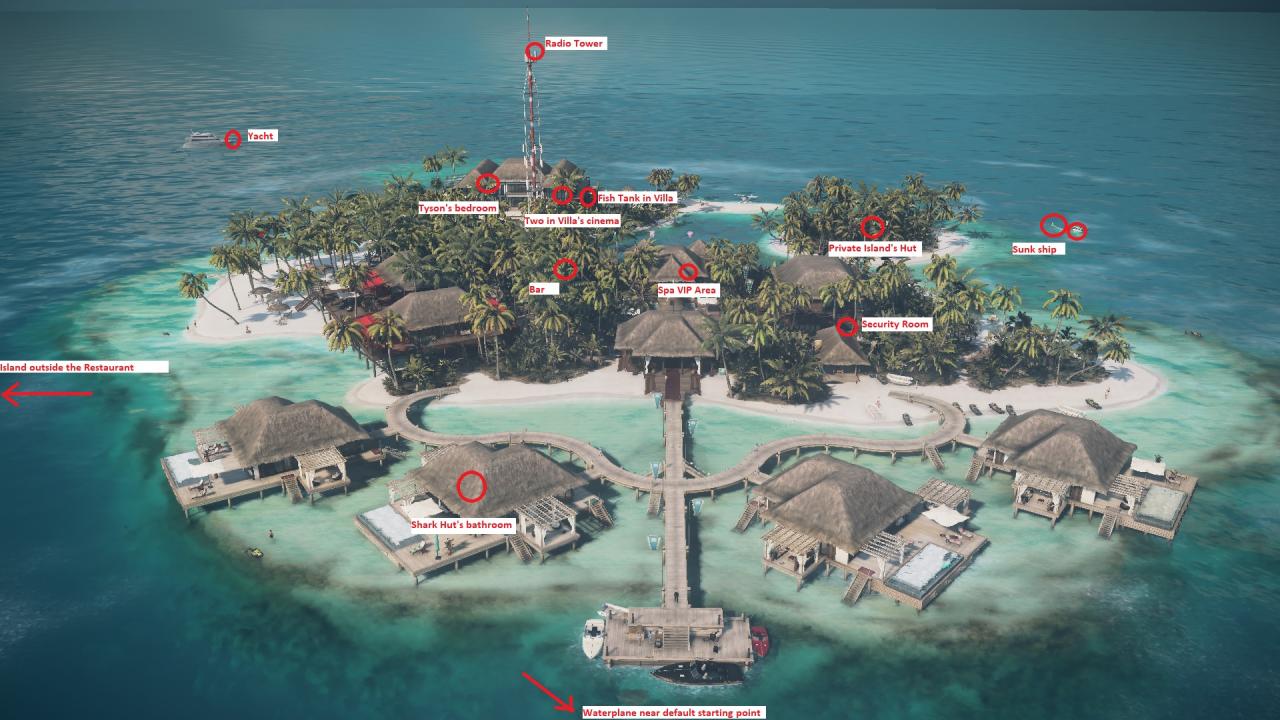 This Easter Egg has three conditions to trigger:
– a weather change (wait 50 minutes or eliminate at least two targets)
– the guy on the trampoline near Villa’s swimming pool must jump to the water (pacify or kill his wife, next to him – Sleeping with the Fishes redacted challenge)
– collect 11 HAVEN Pamphlets (doing Well Informed challenge once againAfter doing these steps, check the Private Island and the Moosenado emerging from the water 🙂