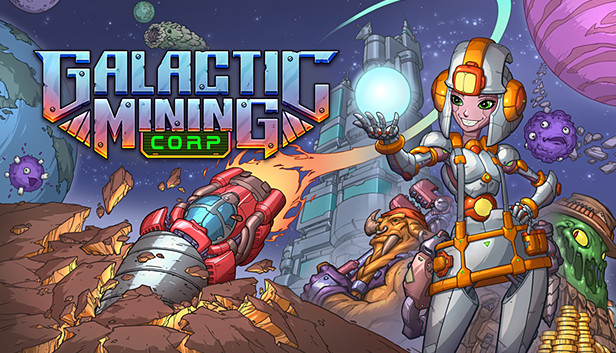 For Galactic Mining Corp players, if you are new to this game and looking for some tips and tricks about the game, this guide will help you be better.

Welcome and i hope you enjoy this guide and game.
I am creating this guide based of my knowledge and observations of game after my first full playtrough (for 100% achievements), so i dont know everything, but i hope that this guide will help someone.

Keep your unlocked rooms upgraded as they provide coin multiplier for every drilling trip you complete. You can upgrade all rooms in “Rooms” tab, even those you didnt placed yet in your HQ and they also contribute to your multiplyer.

In endgame, there is more rooms than spaces in HQ, so you will need to remove few starting rooms to place late-game rooms with better stats and to have as many crew in them as possible (at endgame your building efficiency with all crew and specific element resistancies will make the difference in 3rd/last quadrant)

There are few options how to get more coins per drilling trip, so here we go:
1. Keep your rooms upgraded for that multiplier
2. Pick stuff (chests, mutlipliers, stuff in big rooms) during drilling
3. Drill blocks of everything as it does provide lot of coins with other boosts
4. Upgrade your blocks in “Collections” tab to get more gold coins per mined block
5. Mine to Core when you can as it gives nice rewardsIn the endgame you shouldnt have problem with coins, but you might be bit tighter in amount you have and want spent on upgrades.

Recruit and assaign new crew as soon as possible, so it can gather xp, level-up and provide your drill better stats.

Crew that is assigned in buildings in HQ, it gains xp per drilling trip (its written after drill in that end-table).

As for Recruiting new Crew, you need to mine the material and items yourself (or with Nano-drills) – if you wanna know on what planet/moon/asteroid/gas-giant has stuff you need, just look for it in “Collection” tab (faster) or manually click trought every discovered planet in “Astronomy” tab (slower)

Check “Collection” tab after every long drill (many blocks mined) or every few drills to upgrade all blocks and items that you can. Upgrading blocks and items boosts its coin value = you get more money per drilling trip.

As for Achievements Upgrade 360 Blocks and 360 Items – these would be last completed as its long way to collect it all – so dont sweat it untill you finish all the other achievements (because collecting stuff for every other achiev should put you around 300 blocks and 300 items out of 360, most of whitch will be from 3rd/last quadrant and you DO NOT get xp for them if you get them from nano-drills, you NEED to mine them manually (if i understood it correctly)).

You unlock research tiles 2 ways:
1. Completing research on planet by collecting Green Leaf coins from blocks, chest-like things with Leaf symbol or from big rooms with Leaf symbol coin (and it should take about 1-3 trips of long mining per planet to complete)
2. Finding Research Facility during exploration of Quadrants.In “Research” tab, when you can research something, it has green arrow avaible, but IT DOES CONSUME that block or item for research.
Research only unlocks new Rooms and achievs as far as i know (as mentioned in Rooms section of guide, get them for that multiplier, but no need to rush it, you will get most of it eventually just by playing and in endgame i only needed to farm like 10-20 blocks or items to complete all – items and blocks from Nano-drills DO COUNT towards research, so thats nice)

You get Nano-drills from “Market” tab, after you unlock them in exploring quadrants (in those Market drops) and then buying it. You can deploy them in “Astronomy” tab and collect sruff from them also there.

IMPORTANT: Blocks and Items gained from Nano-drills DO NOT count towards xp of said blocks and items, but you CAN use them in Research and hiring Crew.

so start using them as soon as you get them, they are nice addition to speed your progress and to mine less manually for crew and research.

You get new Drill Head by upgrading your Corporate level. There are 4 Drill Heads in game and you should switch to new-one after you match atleast Power and HP stats with upgrades.

You get new Drill Body by exploring space and buying it there in space garage with coins and Green Leaf Coins. As far as i know, they only add xp boost for crew for every drilling trip and abilities from crew.

Crew abilities:there is a lot of crew abilities, but what i recommend using is ability “Healing from Chest” as that gives you heal for every chest you break. (it saved me couple of times).
What abilities you choose is up to you, but to keep upgrading Drill Head i would suggest not unlocking last pilot/crew slot on Drill body as its expensive in Drill-bit stuff.

There are few enemies in game, but im not gonna spoil for you what all of them do (find it for yourself 😛 ).

However, i will tell you 2 things:
1. TNT explosions (and it chain version) can kill the enemies if they are close enought to it (except the big worm, i didnt try it on that-one), but clear-the-horizontal-line Block will not kill the enemies, only Blocks that have explosion
2. They are not active if they are out of screen or at the edge of it (most of them, but Jelly-fish enemy and big worm are not affected by this, once they go, they go)

That’s all we are sharing today in Galactic Mining Corp Tips and Tricks, if you have anything to add, please feel free to leave a comment below, and we’ll see you soon.
Credit to german038389