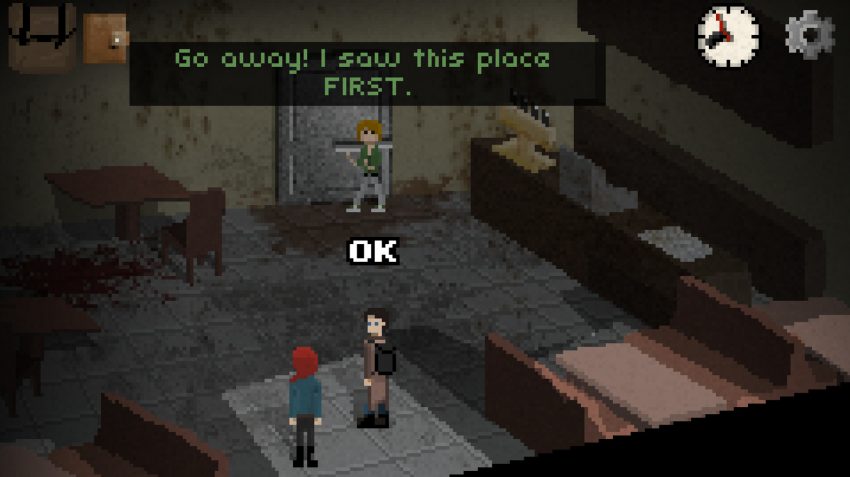 A series of walk-throughs, detailing how to beat each game and get every achievement.

Welcome to my guide. This guide will be a walk-through of all three games, and will have some extra stuff like how to get achievements and stuff.

The walkthroughs will give you a way to get the best ending in all three games.

I honestly recommend trying to beat these games yourself and not to look at this guide if you’re stuck. However, I can’t stop you.

This guide will either hide or not include any story spoilers.

This guide will also skip unnecessary items and any lore documents for the main walkthrough. These may be addressed in a trivia section later.

Feel free to leave comments if I’ve screwed something up, need something clarified, or if you have a question.

This guide is up to date with in-game version 1.1.3

Short and sweet. The one that started it all.

You woke up in a cabin. You’re a werewolf. You’ll turn tonight. People will die… unless you DON’T ESCAPE.

If all went well, you should have the best ending, ‘A Calm Night’.

A new time mechanic makes this game stand out from the others and would become the foundation that future games built on, especially DE4.

It’s a zombie apocalypse. No one was ready. You and your friend Bill escaped from a horde… but Bill got bitten. We all know what that means…

You have to hold out in an old house you found and secure it from an impending horde.

Note: There is no ‘best’ ending in DE2. The game is extremely open ended, with several achievements for different styles of winning. As such, I’ll give multiple walkthroughs for getting each achievement. By no means are these exactly what you should do. Experiement.

The Survivor, The Merciful, The Saviour

You have a heart of gold in these trying times…

You can get these three achievements at the same time.

No matter how stealthy you are, they’ll still come.

The Shadow achievement is gained when you survive but you never fire a shot.

You’re worse than the zombies.

The Governor achievement is gained when you

You don’t need friends. Not even Bill.

The Lone Wolf achievement is gained when you survive and you have made friends with no one.

My personal favourite and the most story heavy.

You wake up with a pounding headache. In a spaceship’s airlock…

and the computer is counting down to something…

Note: DE3 has multiple endings related to achievements but they can all be achieved in one play-through and then simply reloading your save. I will mention when you can get a new ending.

As soon as you start the game, you have a 30 second timer to get out of the airlock.

This will get you the ‘Best’ ending, ‘Lost In Space’.

This is just a bare section for now, but if there’s anything interesting of note, I’ll list it.

This is kind of a section that is completely worthless, as if you follow my guides, you’ll get all of these anyway.

A Calm Night
(Don’t Escape 1) Don’t hurt anyone.
Simply get the ‘A Calm Night’ ending.

The Survivor
(Don’t Escape 2) Complete the game and survive.
Beat the game in any way.

The Merciful
(Don’t Escape 2) Make sure Bill passes away calmly.
Give Bill painkiller and then alcohol. After that, shoot him with the gun.

The Shadow
(Don’t Escape 2) Complete the game without firing a single shot.
Self explanatory, really… This also counts in the ending cinematic.

The Savior
(Don’t Escape 2) Survive and save both of your friends.
Recruit Jeremy and Father Bernard and make sure they both survive.

Spaced
(Don’t Escape 3) That’s a fast way out…
Let the time run out, or click Eject while in the airlock.

The Truth
(Don’t Escape 3) Learn the truth behind Horizon’s murders.
Enter the crew quarters using the passcode and learn what actually happened…

Hull Breach
(Don’t Escape 3) Make sure that the rescue ship survives after learning of the Horizon’s fate.
Use the bomb on the crystal after getting all small crystals and blow it up with you near it.

Lost in Space
(Don’t Escape 3) Make sure no one finds out anything about the UEFS Horizon incident… ever.
Use the bomb on the ship’s engine after getting all small crystals and blow it up with you near it.