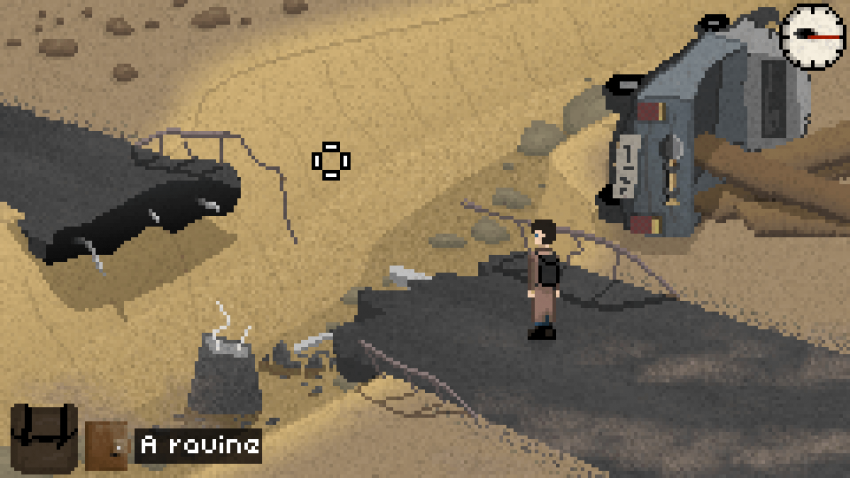 Here’s how you survive the noxious fumes on the third variation of day 1 in Don’t Escape: 4 Days in a Wasteland game.

In order to get as ready as possible, you’ll need to keep in mind what you need to protect yourself. This includes:

Let’s go over each of these defenses in detail.

As always, protection against the outdoors involves the simple act of leaving your doors closed at night. However, gas tends to be a little more persistent than that. Raid the kitchen and bathroom for their towels (both items unique to this scenario) and use them to plug the doors up. But first, you need to go out and get everything else you need.
Plastic Window Covering
This is the best thing you can do to seal off the rest of the openings in your house. To set this up, you need

The DUCT TAPE can be found in one of the lockers in the big green van at the roadblock. In order to get in there, and subsequently, the locked lockers, in the first place, however, you’ll need the

Which can be found stuck in the cash register at the gas station at the other side of the broken bridge. It’ll take five minutes to tug it out, but you can shave it down to one using the

Which is made by combining

The Broken Hammer can be found in the big blue chest of your hideout, while a Broken Handle can be yanked off of the spade on the truck by the broken bridge. Combine these two to make the hammer.

The HANDFULS OF NAILS can be found by prying them off of the greenhouse by your hideout, along with the broken planks. Those aren’t useful yet, and may never end up being useful anyways, so those will be highlighted in a soon-to-come Perfect Defense – Cold guide.
To pry the nails off the greenhouse, you’ll need one of two tools: the Hammer or the Crowbar.
The Hammer takes twenty minutes to get one handful of nails, while the Crowbar takes ten minutes to do the same. Details on how to obtain these tools can be found above. Do this three times to get enough nails for all three windows.

The THREE SHEETS OF PLASTIC WRAP can all be found in the second room of the Gas Station. Collecting them requires no tools, but they weigh 12 kilograms in total.

The Hazmat suit can be collected and properly fixed using the following items:

The Hazmat Suit can be collected from the back of the big green van at the Roadblock using the Crowbar to get inside, and then to pry open the rightmost locker. See above to see how to get the Crowbar.
See above to learn how to get Duct Tape.
The Air Filter can be found on one of the corpses at the roadblock by examining them. Examine both to be sure.
After getting everything, combine both the Air Filter and the Duct Tape with the Hazmat Suit, one at a time, and you should have a fully operational Hazmat Suit.

This is a rather strange defense, but a crucial one all the same. To determine this, you’ll need

You’ll also need some general knowledge about gasses, namely that the density of air is 1.61 kilograms per something, and that anything heavier will be close to the ground, while anything lighter will be away from the ground. All of this information is conveniently provided to you by one of the corpses at the Roadblock via sticky note.
The Weather Drone can be found by the broken bridge, completely unattended and mostly broken. Examining it shows some readings for a “weather anomaly”, the gas.
The Weather drone will have some information on it, namely, the density of the gas. Check the third reading for the density of the gas in kilograms per something, and see if it’s lighter or heavier or lighter than air. If it’s heavier, you’ll want to spend the night upstairs. If it’s lighter, you’ll want to go downstairs at the end of the day, instead.

This is probably the most complex defense to set up, and thus, is the most important one. To do this, you’ll need
READ:  Don't Escape 4: How to Survive in Day 2

To collect the fuel, you’ll need

The Adjustable Wrench can be found at the Roadblock near one of the corpses.
The Empty Fuel Canister can be found in the Gas Station shop, under a shelf.
To fill up the fuel canister, go to the Gas Station parking lot and use the Empty Fuel Canister on the large fuel tank’s Fuel Valves to place it on the ground next to it. Then, use the adjustable wrench to open the fuel valve, pouring fuel into the Fuel Canister. The Full Fuel Canister weight a whopping 10 kilograms, so be wary.
See above for details about the Weather Drone.
The Neutralizing Solution can be made in the back of the green van at the Roadblock. To make it, you’ll need a Glass Bottle in one of the lockers. To make the right solution, there’s a sticky note indicating which solutions must be mixed according to the PH of the gas. Use the bottle on both stations to dispense the appropriate liquids inside.
Once you get all of that, go to the barn by your hideout. There, you’ll find an automated sprinkler system and a generator. First, kick the haystack down three times to reveal big holes in the pipe, so you can patch them up with duct tape. Then, pour the fuel into the generator, set the dial to “sprinkler system” and pull the cord three times to start it up.
Now go to the sprinkler’s control panel (the flashing orange lights). Set the sprinkler to “overnight mist” and quickly solve the efficiency puzzle by clicking each of the four middle buttons once.

Well, how do I do all this, you may ask? Well, no telling if it’s the most efficient solution, but I seem to have several hours to spare when I do this:
READ:  Don't Escape 4: How to Survive in Day 2

You may have noticed that there were no instructions regarding the Car or the Bridge. Using my guide, you should be able to pick up everything you need for the car and completely repair the bridge by grabbing Two handfuls of nails from the greenhouse, the Ignition Coil from the Blue Car at the Roadblock using the adjustable wrench, a Wheel from the truck by the Broken Bridge using the Adjustable Wrench and a refill of the Gas Canister at the Gas Station using, all together now, the Adjustable Wrench. Regardless, with all this in mind, you should be able to survive the night and get that sweet, sweet +5 to Weight Carrying Capacity. Till next time.