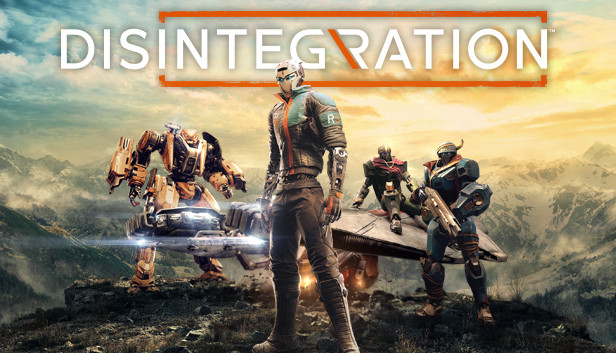 For Disintegration players, this is an achievement guide that will help you unlock every achievement in game, let’s check it out.

Step 1: Beat the Campaign on Recruit (or above) collecting all salvage containers and as many challenges as possible.
Recruit is the second difficulty and the one I recommend you play. Playing on higher difficulties makes missions 3 and 4 fairly difficult (though missions 5 onwards are much easier).
Talk to all your crew members before starting every mission. They will give you challenges for the upcoming mission. I’m not sure if you can go back for them if you forget to talk to them. Try to do as many of these as possible, but they can be done later vis mission select.
I also recommend opening all the salvage containers along the way as they will provide scraps (needed for levelling up and opening upgrades) and upgrade chips (needed to buy upgrades). There’s a guide with all their locations here[video-game-guide-walkthrough.supersoluce.com]. There’s one mistake in Mission 8, see “Keen Explorer” for more information.

Step 3: Clean up remaining achievements.
You’ll need to complete any mission on Outlaw difficulty. I recommend the first mission. Even with an upgraded crew, your squadmates will die easily and the enemies are bullet sponges. Take it slowly sniping enemies from afar.
Finally, you may need to grind salvage to reach level 10 and buy all th crew upgrades. Personally, I didn’t need to grind anything as I reached level 10 upon finishing Mission 1 on Outlaw. I guess Mission 2 would be a good choice to grind as that missions revolves around collecting salvage.

As the description says, this achievement will unlock upon completing the other 28 achievements.

Defend The Dam
Complete the Mountain chapter of the campaign.

Defeat Black Shuck
Complete the Urban chapter of the campaign.

Make Meg Fly
Complete the Desert chapter of the campaign.

Defeat The Iron Cloud
Complete the Iceland chapter of the campaign.

Grav-Master
Complete all campaign missions on Recruit difficulty or higher.

Complete all 12 missions on Recruit difficulty or higher. Recruit is the second difficulty. The difficulty can be changed anytime in between missions from the mission control panel. The mission select screen also shows the highest difficulty you’ve completed the mission on.

The Mountaineer
Complete all of the Mountain campaign chapter challenges.

Lone Wanderer
Complete all of the Desert campaign chapter challenges.

A Freezing Feeling
Complete all of the Iceland campaign chapter challenges.

Before starting every mission, you will be in a safe area where you can talk to your squadmates and sentry bots. Three of them will give you an optional challenge for the upcoming mission. Remember to talk to everyone before starting the mission. I’m not sure if you can go back to unlock the challenges if you forget to talk to everyone.
As for the challenges themselves, they’re relatively simple and most can be completed on the first playthrough. Most involve using your squad’s unique ability to defeat enemies. See the “Specific Challenges” section for some extra help.
Failing a challenges means the mission will have to be replayed from the start, resetting a checkpoint won’t un-fail it. I recommend leaving all failed missions to cleanup at the end since by then you’ll have an upgraded crew to breeze through enemies. Challenges can be completed on any difficulty.

Keen Explorer
Find all bonus salvage containers in the campaign.

Most missions have salvage containers that show up as green when using your scanner. The ones specifically for this achievement are the ones marked “High Value Caches” which you’ll need to direct one of your squadmates to open. The mission select screen says how many bonus salvage containers you’ve found in that mission.
They only save after completing mission, so if you miss one you’ll need to replay the mission through to the end. Opened High Value Caches stay opened on replays, so it’s easy know if you’ve collected one yet.
Mission 1 has 4 containers, mission 2 has 6, and missions 3-11 have 20 each.

A full image guide for all the salvage containers is available here.[video-game-guide-walkthrough.supersoluce.com]
There’s a mistake in Mission 8: Bring The Heat in the guide. The 7th container doesn’t count. The correct one is below: 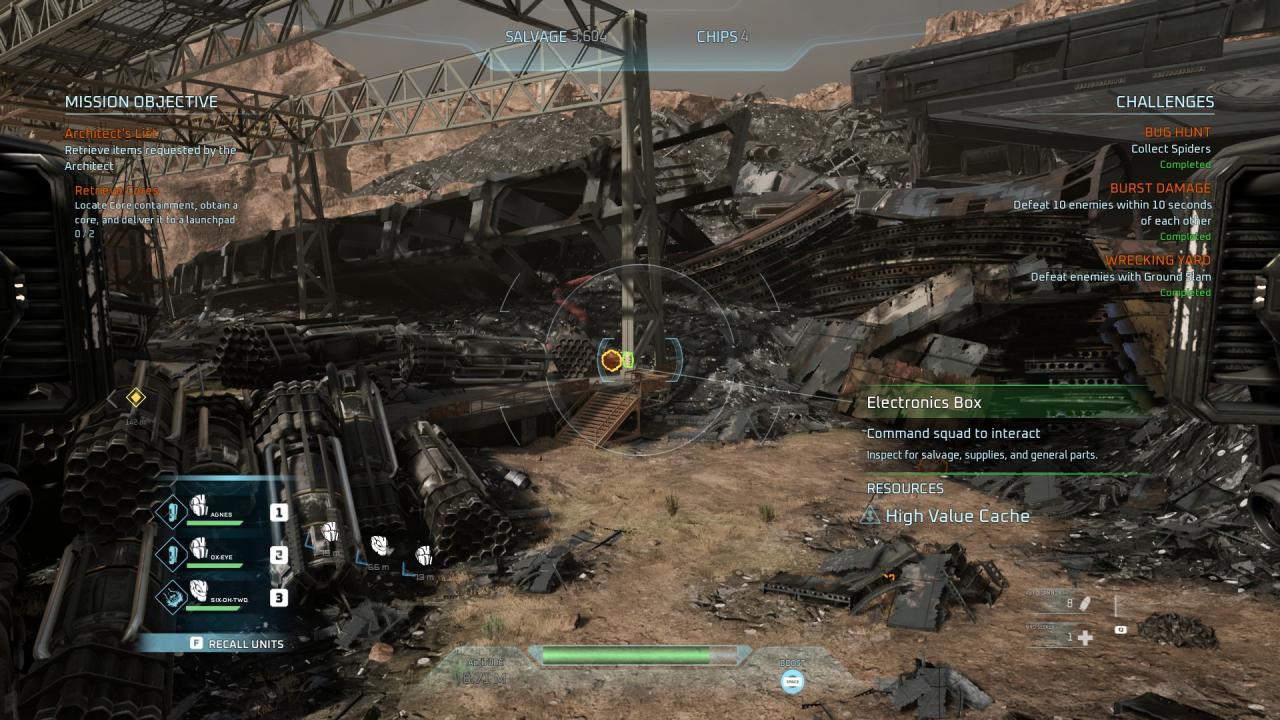 It’s located between the 17th and 18th containers in the guide.

Unmissable. This is a regular enemy that first shows up in mission 5 and fairly frequently in the later missions. There’s even a challenge for destroying one on mission 5.

Unmissable. First makes an appearance in mission 6, and then shows up infrequently for the rest of the game. These are large droids that walk on four legs, and the only enemy in the game that requires some slight strategy to defeat.
To destroy it, drain its lifebar to expose its vulnerable spots on either side (which glow red) and shoot at those before it recovers. There are two nodes on either side and all four need to be destroyed before it goes down. It doesn’t stay vulnerable for long though, so you’ll need to drain its lifebar multiple times before you can destroy all the nodes.
An easy way to defeat these is to just hide behind a corner where it can’t shoot you with its rockets and you are able to target one of its legs. Shoot the leg until its vulnerable, fly up and shoot the nodes, then hide back in the corner when it recovers. Keep your squad in the corner the entire time so they don’t get in the way.

I’m not actually sure how much 20,000 damage is, as there’s no indicator as to how much HP enemies have. I managed to unlock this early on in the first mission on another account. I’m not even sure if I actually dealt 20,000 damage or if the counter is just broken.

Again, I’m not actually sure how much 10,000 damage is since there’s no way of knowing how much HP you have. It unlocked pretty easily for me on another account. If you still need it after everything play Mission 3 or 11 and sit there spamming Nano Emitters while the enemy is damaging you.

Note: The following combat achievements all involve performing a task multiple times. They bugged for me though, and unlocked after performing the task only once.

Activate scan mode to find hidden caches/healing spots and enemies. Aim at a highlight object to scan it and see info about it. This is impossible to miss unless you are actively avoiding scan mode on purpose.

“Direct targeting” means the right clicking on an enemy to direct your crew to priortise destroy them. You’ll probably get this naturally as you want your crew to help you on the bigger enemies.

Concussion grenades are Coqui, Agnes, and Ox-Eye’s unique ability. They stagger enemies and make them more vulnerable to damage. Impossible to miss as you’ll do this as part of a challenge.

Timed Advantage
Use your slow field on 20 enemies.

Slow field is Seguin’s unique ability. As the name implies, it creates an area that slows any enemies that walk through it. Impossible to miss as you’ll do this as part of a challenge.

Death From Above
Destroy 20 enemies with the mortar strike ability.

Mortar strike is Doyle’s unique ability. He launches a massive barrage of explosives at the designated target. Impossible to miss as you’ll do this as part of a challenge.

Ground slam is Six-Oh-Two’s unique ability. He runs up to the target and slams it into the ground, damaging it and the entire area around him. Impossible to miss as you’ll do this as part of a challenge.

Sensory Upgrade
Socket a chip on a crew member.

Maximum Gains
Level up your crew to level 10.

There are two parts to upgrading crew members.
First is the crew level. After each mission, you will receive “experience points” based on the amount of salvage collected during the mission. Levelling up unlocks more upgrades for your crew members. The last upgrades are unlocked at level 10 – which requires 54,000 salvage. It’s unlikely you’ll collect this much during a single run through of the campaign, so you’ll need to replay missions.
Secondly, to apply the actual upgrade you need Upgrade Chips. These are given to you for completing mission challenges and can also be found in some high value caches.
There are six members to upgrade: yourself, Seguin, Doyle, Agnes, Ox-Eye, and Six-Oh-Two.

School’s Out
Complete the training mission.

Easy. The tutorial can be found in the main menu. You’re also asked if you’d like to play the tutorial on starting a new game.

Garbage Day
Collect 1000 or more salvage in the campaign.

Impossible to miss as you’ll be getting this much salvage just from opening caches and defeating enemies. You’ll probably pass 1000 in the first mission.

Outlaw difficulty is the highest difficulty the game has to offer. I recommend finishing the campaign first so you have an upgraded crew and then replay the first mission.

Going over some of the more awkward challenges.
Mission 3

In the Clear – Complete mission without being hit by a Blackout Pulse
It’s best to do this on a second run when you don’t have to worry about collecting salvage crates. Remember to rush to the first protection zones when you reach the city gates to avoid the first pulse.

Pulse Pounding – Defeat enemies affected by Blackout Pulse
You probably won’t get this unless you specifically farm for it. After reaching the Blackout Tower, I destroyed half the cooling nodes (enemies didn’t seem to spawn if I didn’t) and backtracked to one of the previous protection zones. There I just waited for enemies to come and get caught in the pulse. As long as you don’t defeat the tower enemies will keep spawning.

Clear Skies – Defeat aerial enemies
This one was a little annoying as some flying enemies don’t spawn properly.

That’s all we are sharing today in Disintegration Achievement Guide, if there are anything you want to add please feel free to leave a comment below and we’ll see you soon.