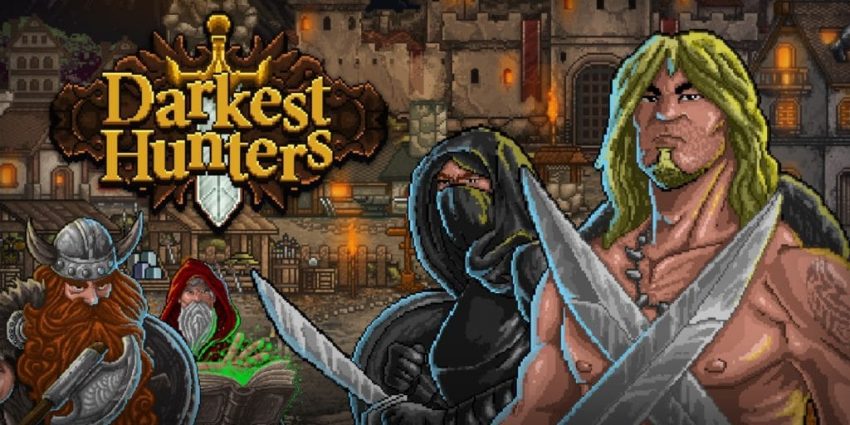 Welcome dear reader. If you’re hunting for more information about playing Darkest Hunters, then I hope you will find something of value in this quick guide. I know getting started was pretty easy as the game play is mostly straight forward, but I had a couple questions about certain features early on. Maybe you have those same questions and I can answer them for you.

Inventory space is unlimited, so don’t be in a hurry to sell off what seems like low-level gear, at least right away. Because you will gather additional equipment from chests or the shop, you may be able to level up a lower end item to hold you over until you find a better replacement. You can sell it later so don’t be in a hurry to get rid of it. If you need some gold, go farm a low level map.

Don’t Stand So Close to Me

Need to kill that pesky enemy with a bow in order to complete a gold star, but they keep getting up close and personal? No problem. You can manually opt to use the bow for your next attack by selecting it from the HUD along the left edge. You have to manually select it each attack if the enemy occupies a token next to you.

As stated above your inventory is unlimited, so use that to your advantage. Keep at least one set of armor (or at least a chest plate) for protection from each type of element. Scorpion poison, for example, can take you out quickly if you are not prepared. You can change equipment any time you want during a level.

The same holds true for weapons and bows. Keep at least one weapon per element so that you can switch weapons based on the enemy. Obviously you don’t need to switch gear constantly if you are grinding on a lower level map where you over power all enemies present.

Certain gold star “quests” require you to “finish” an enemy with magic or a specific spell. This can be a minor annoyance when the enemy has just a small amount of health more than the amount of spell damage, as a direct attack with your weapon may kill the creature, but using the spell may not. In that case just make a short chain of tokens, so as not to make a special crystal, which the creature may run into and kill itself, but that will keep you within their striking range, which allows the creature to attack you and take a small amount of counter attack damage. Then finish it off with the magic spell!

You might also be able to downgrade your weapon to avoid killing the creature with a direct attack, then finish it with the magic spell. Or you can use a 1st level special crystal to reduce the creature’s health, depending on how much health they have.

To Upgrade or Not To Upgrade?

You will have plenty of opportunity to upgrade equipment, but each upgrade costs an increasing amount of gold, quickly sapping any reserves. Buying spells is costly as well but tied to a Steam achievement so you may want to save gold for that. If you selectively upgrade equipment as needed, you will spend less time grinding for gold. You will eventual get “set” pieces that you may want to upgrade once you get a full set. Even here do go crazy as a better set may show up later.

I have am only reached map level 27 thus far but gold is constantly in short supply so money does not become worthless in this game. Grab as much gold as you can while making your way to the map exit once you’ve cleared all enemies.

This guide is not going to cover the basics, like what is a token, what the token color means, or how to chain the tokens together; however, there are a few tips and tricks around “special crystals” that I want to cover. 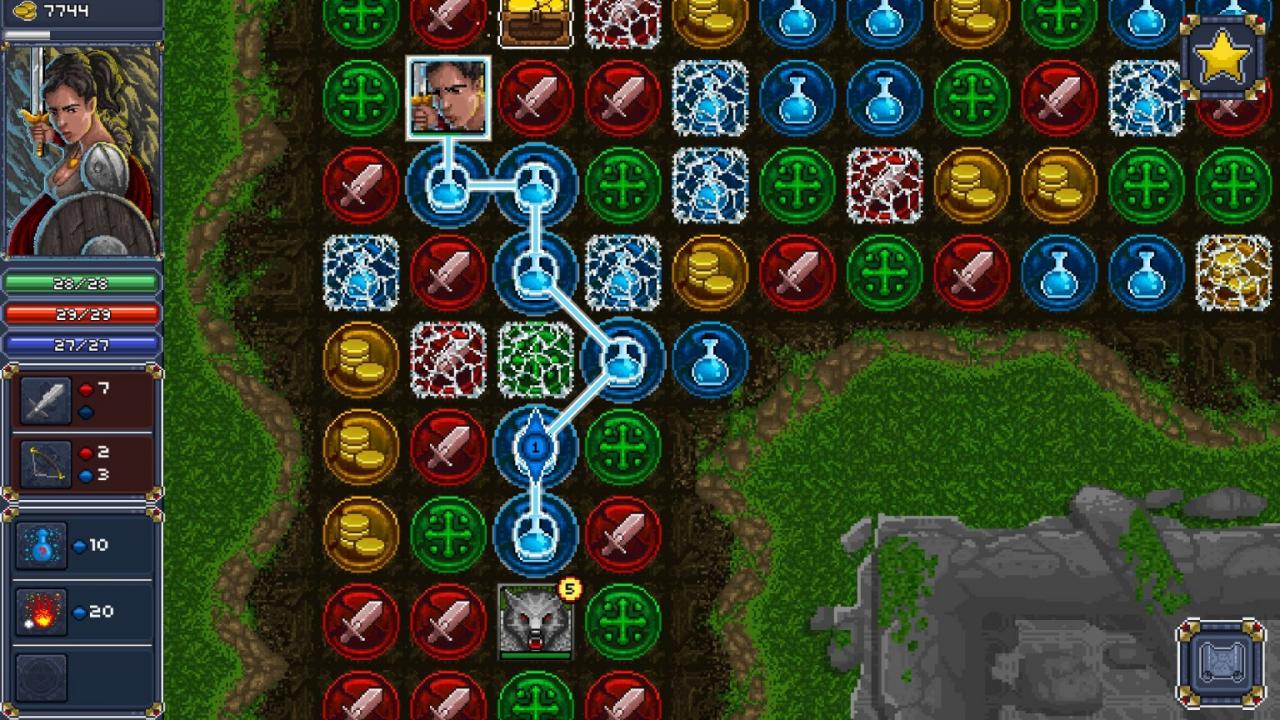 The level 1 special crystal once created, will destroy tokens/damage enemies in a horizontal or vertical direction based on the indicator shown. This is important if you are attempting to destroy ice blocks or a specific enemy. Pay attention to which way the icon is pointing as you create it. The 2nd, 3rd and 4th level special crystals all impact 4 of more directions so it is not really important. 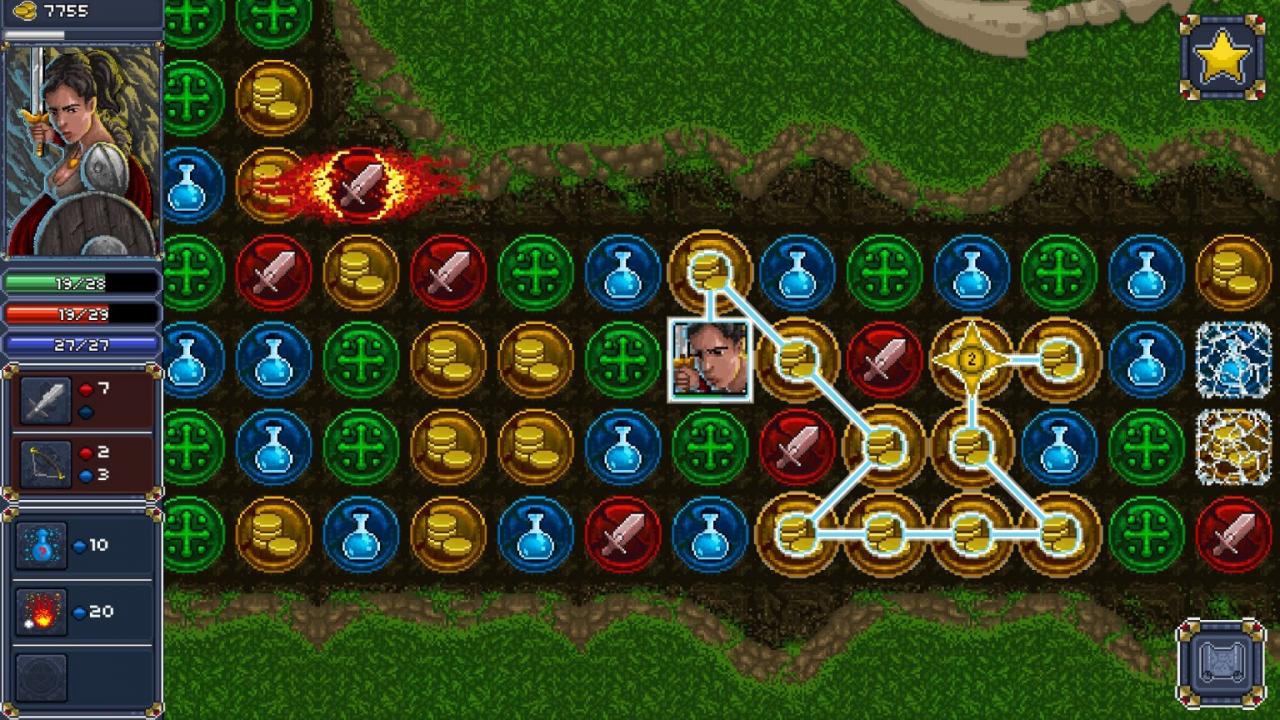 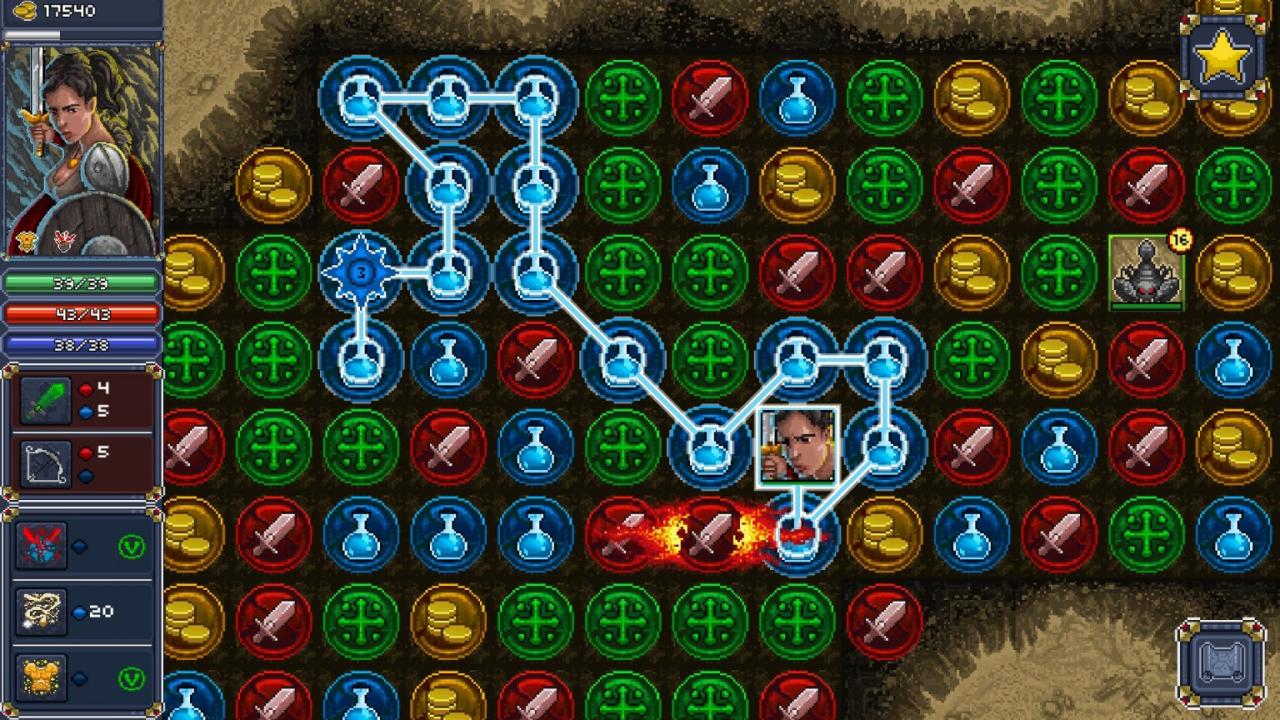 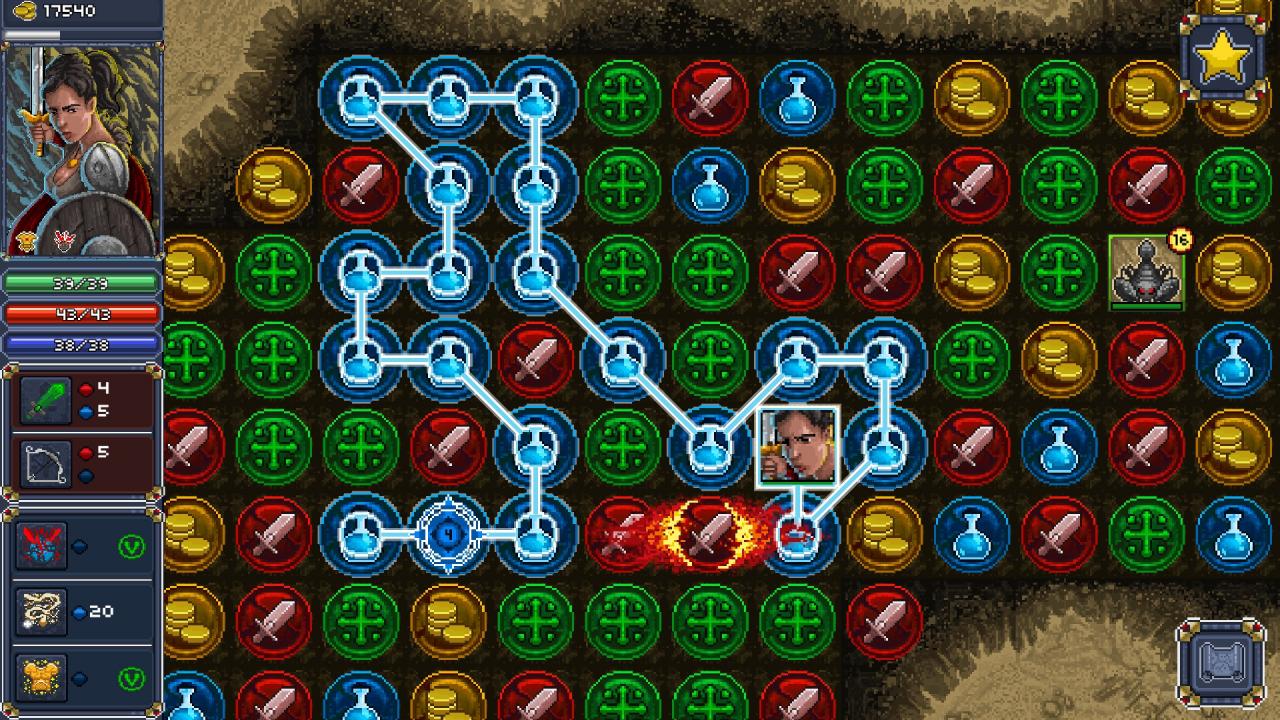 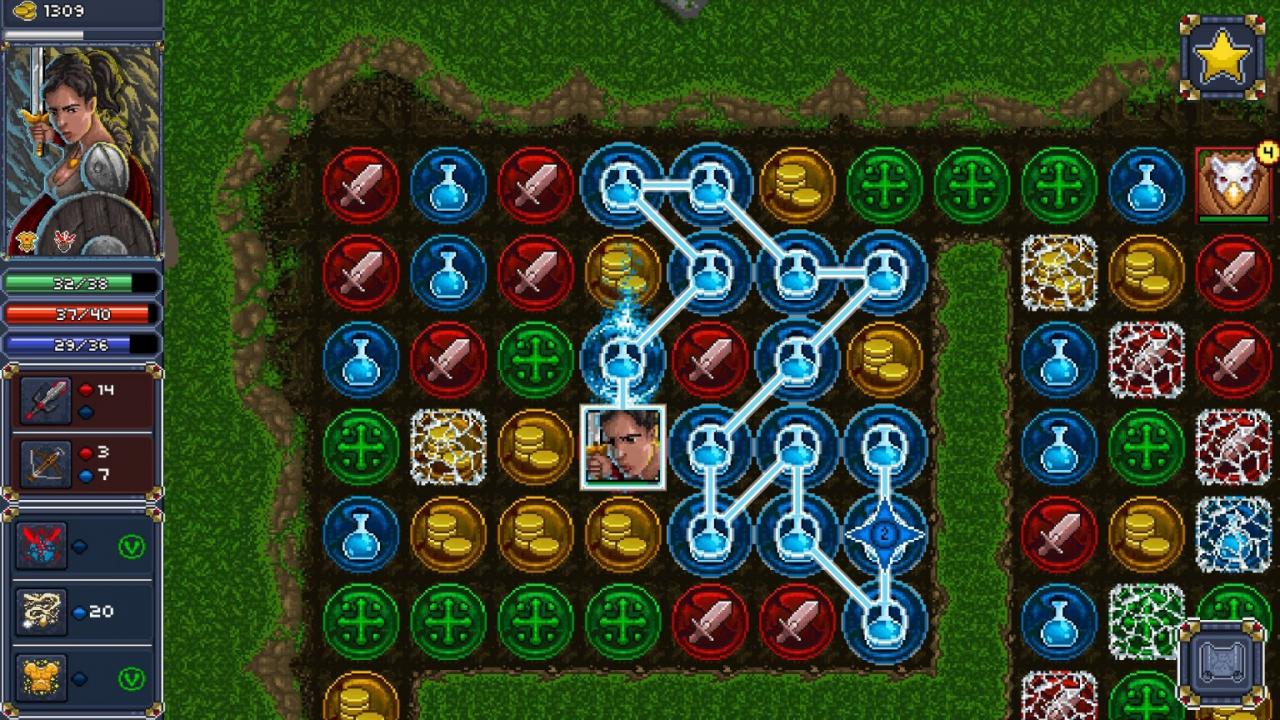 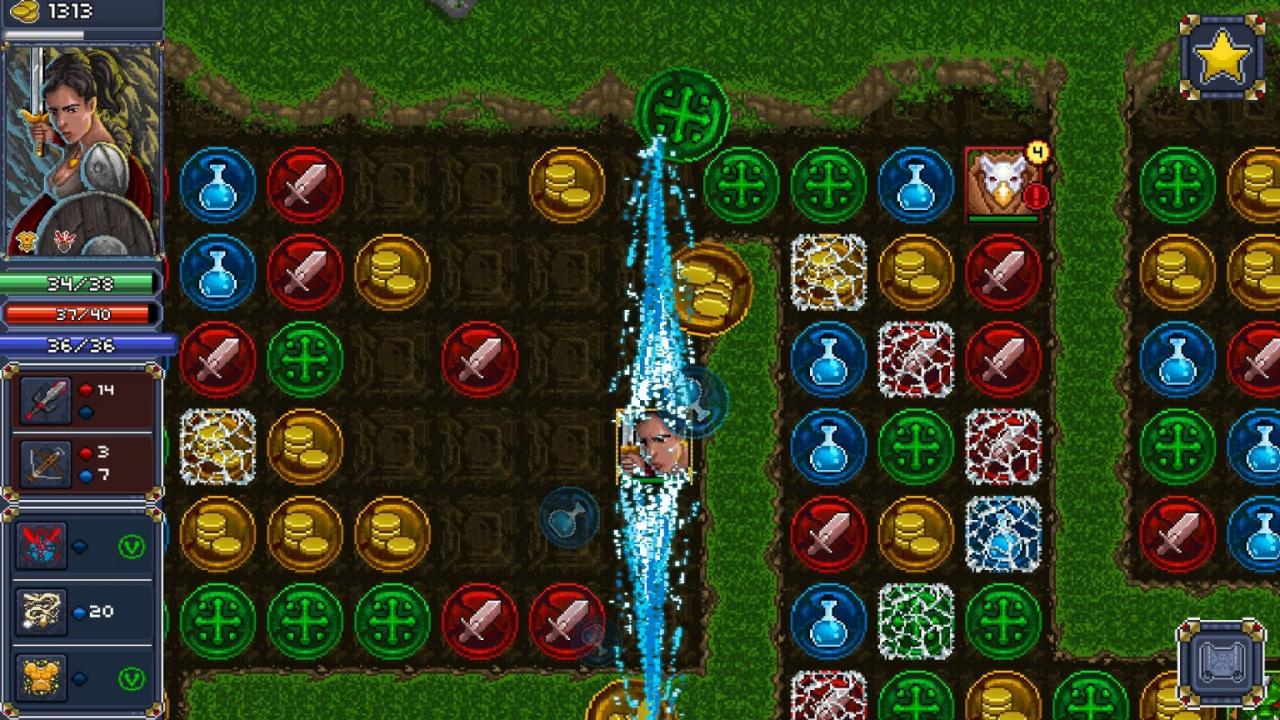